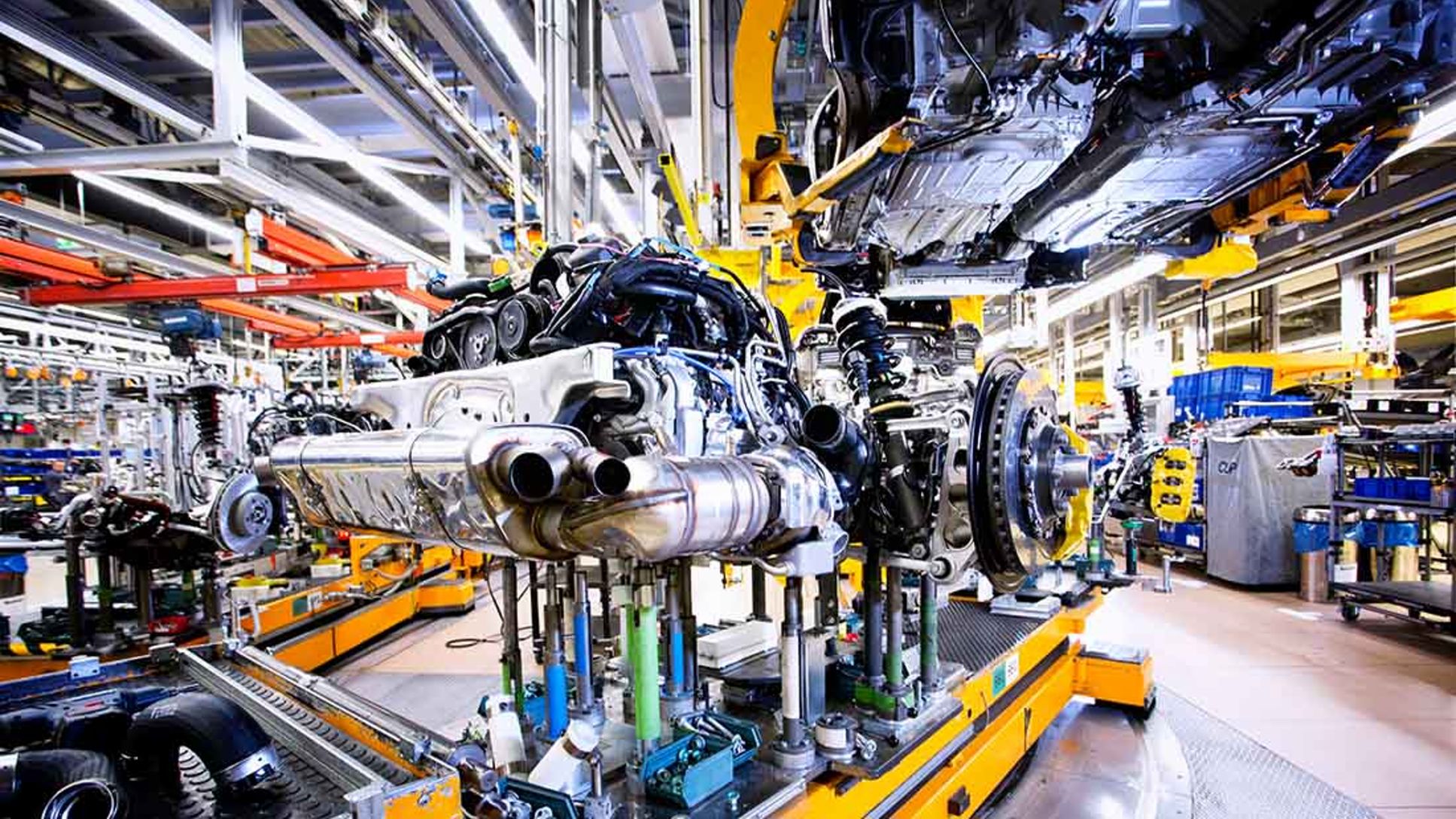 Car manufacturers around the world speak about a "marriage" when they insert the chassis, transmission and engine in the body on the production line. This also applies in Zuffenhausen, where the ceremony takes place in a very special manner.

The visit to Building 60 starts off with irritation. Robots. Where are the robots? The spectators will search unsuccessfully for machines being moved invisibly here. In large mass production companies, up to 15 robots whirl around during a comparable production sequence. But here in Zuffenhausen, highly motivated employees work in two-man teams in the heart of the assembly line. The heart piece – the flat engine – is not fitted into the vehicle directly by hand for any nostalgic reasons. The marriage experts at Zuffenhausen are unbeatable when it comes to the variety of models and complexity. "We intentionally do not have a high level of automation here", explained production manager Mario Pawlowski, "We have to process heavy, complex components with a high level of variance with precision and reliable technology in a very small space."

The "small space" Pawlowski and his teams are referring to is the engine compartment in the 911 and Boxster model series. Before and after installation of the engine, there is really very little air or space. Every cubic centimetre is exploited - completely. Production manager Pawlowski and production planner Schnabel are the masters of ceremony at the Zuffenhausen marriages. They are firmly convinced that the diversity of the 280 axle variants alone precludes any form of automation. Add to this 20 engine/transmission and 10 body variants. There is just this one marrying location in the entire Zuffenhausen works. For mid and rear engines. For Turbo or GT3, all-wheel or rear wheel drives.

The actual marriage itself takes place so quickly on the platform that an unprepared witness could actually miss the climax as it were. The previously painted and preassembled 911 and Boxster bodies glide in almost silently on the raised conveyor belt. They just need to navigate a 90 degree curve while, at the same time, the chassis and engine approaches on a "lafette" – a mobile carrier of the axles and engine. The body and the carrier are synchronised and then the carrier rises. The two-man teams join the unit rapidly and adeptly – without any hastiness. Everything is over when employees with ultra-modern and monitored electric screwdrivers bolt the chassis including engine. High-precision work in seconds, but different each time. It is rare that two identical wedding pairs are joined together in sequence.

This great diversity puts paid to any danger of error-producing boredom amongst the marriage experts. Some of the bigger engine packets even require a third person so that the marriage can actually take place. An additional worker has to be included in order to install the complex additional technology in the case of the turbo engines. Logically, the third person is called the "Turboworker". Schnabel: "This person replaces the third arm in the permanent team."

The employees are involved right from the start of prototype construction for a new model generation. "We have an unbelievable level of know-how here, gathered over many years, so it makes sense to include the employees in the development process at a very early project phase. We embody our philosophy 'From affected to involved' in this way", said Pawlowski. "Each person is therefore actively involved in the design process." Quite often, small details and ideas subsequently become a part of the whole. One example: to prevent protruding cables from catching on the body during installation, a specially constructed holder is initially used to hold the cables together. The holder is only removed in the engine compartment and the cables can then be laid.

Hardly anyone hides their pride about working here. For example, Mustafa Kocyigit said: "You can only speak about a real car after the marriage has taken place". The production master is still enthusiastic about his work after many years and is not shy about making profound comparisons. "It is a bit like the Creation. Life is breathed into every Porsche here", said Kocyigit. "Each vehicle is absolutely precisely and safely bolted. The customer can therefore have faith that his car will drive at more than 300 kilometres per hour on a racing track", said Kocyigit. It is at least as important to the production master that he and his highly motivated and expert team bring about real unions for life over 200 times a day. With a practically non-existent divorce rate. What registrars could say the same about themselves?