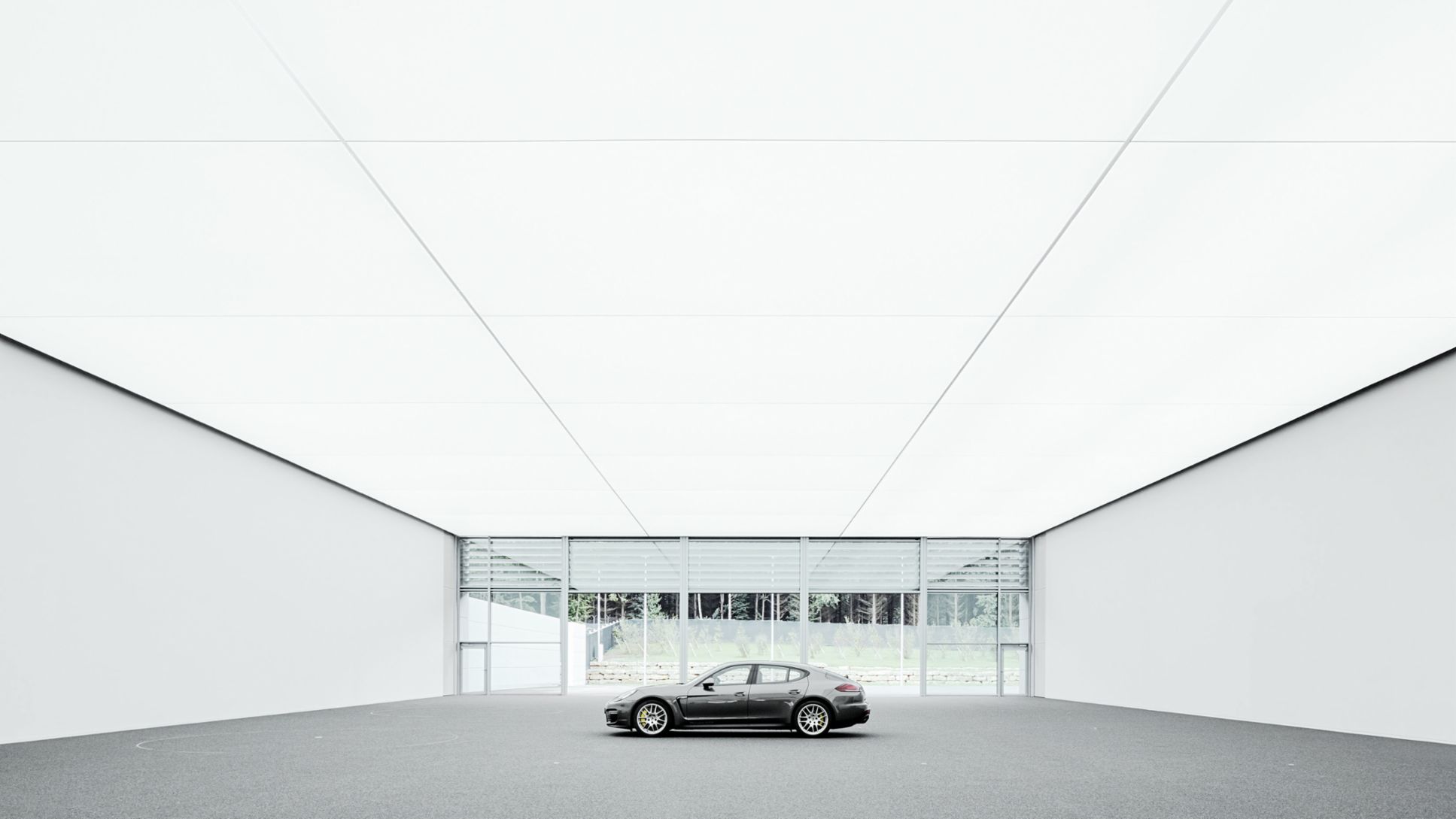 What happens at the Weissach Research and Development Center is topsecret.  Head of design Michael Mauer gives us an exclusive look at his new digs.

The room is as large as a gymnasium. And it is at least as spartan. The walls are uncompromisingly white. No pictures, decorations, or color. The lighting elements on the high ceiling emit the same diffuse light as on a slightly cloudy summer day. The floor is dark gray. That’s it. But this nothingness is everything.

Michael Mauer finds this hall so sublime that his blue eyes light up. He points to three large turntables recessed into the floor: this is where he will present his 1:1-scale models. All of them will be the same color: silver. You might think Mr. Mauer is a staid purist. Yet the man exudes lively enthusiasm, right down to the gestures of his slender hands.

The head of Style Porsche proudly shows us around the new design studio on the grounds of the Weissach Research and Develop­ment Center. The magical place where the sports cars of the future are born is just as clear and austere on the exterior as the presentation hall is inside, and for good reason. “The building is a shell that needs to be restrained. The structure must not distract from the function that it serves,” says the design executive. In the high-ceilinged presentation hall, Mauer will present the new models that he has developed with his design team to the Porsche board. Then they’ll decide which variants will be built. And which won’t.

The floor is dark gray—because this color is very similar to the color of asphalt. And the light does not shine brightly like on a perfect day at the beach—because the human eye can evaluate shapes better under a lightly clouded sky. It’s also no coincidence that all of the future sports cars will be presented in the same color. Comparability is key, and nothing should distract from the lines. As a result, all models will be shown in a discreet, unobtrusive silver.

Michael Mauer is 52 years old; he has worked as a car designer in Gothenburg and Tokyo. But the tiny city of Weissach near Stuttgart offers something that was missing in those other locations: inspiration through nature. The front side of the presentation hall is a wall of glass, while a luscious, verdant forest is located right behind the design center. And Mauer can also present his models in front of this backdrop: outdoors, in daylight, in front of trees, so one can see how the models would look on a country road. To preclude the risk of industrial espionage when these sports cars of the future are being displayed, the presentation courtyard is protected by concrete walls. A double fence around the woods adds a second layer of protection.

Michael Mauer: “Our development center is an inno­vation accelerator”

Weissach is growing. “Our development center is an inno­vation accelerator,” says Michael Mauer, “because all of the departments are located so close to one another.” In the past, when designers wanted to test a model in the wind tunnel, it would first have to be laboriously loaded onto a truck and transported. “It was extremely time-consuming to camouflage a prototype—under no circumstances should unauthorized people see our work during loading and unloading.” Today Mauer simply has the model rolled, unseen by prying eyes, into the large ele­vator, down a hallway in the basement, and into the brand-new wind tunnel, directly adjacent to the design studio.

In spite of all the idea acceleration, the hot phase for a new model lasts about two years. Over one hundred designers are divided into three essential groups, as Mauer explains during a tour of his new 9,000-square-meter realm. On the forest side, the exterior department plies its trade. Their workshop is even larger than the presentation hall—some 70 meters in length. Workers have just polished the floor, which reflects the fluorescent lights in the high ceiling above. The back wall is all-glass—here again, the woods of Weissach serve as a natural backdrop.

When the exterior designers have created a new model on the computer, the next step is to build bodies out of plasticine. This step is followed by 1:1-scale models made of high-density foam. The spaciousness of the rooms allows them to look at the models from a proper distance. Mauer explains why that’s important: “If I’m standing one meter away from a Macan, I can’t see if a line drops.”

The big advantage in Weissach: To work with a farsighted view

Moreover, in the hall the modelers always have the opportunity to evaluate their work in natural daylight. They are currently pushing a Boxster into the courtyard and examining it against the green background of nature. “That’s our great advantage in Weissach,” enthuses Mauer, “here we can work with a farsighted view. And yet we’re still close to Zuffenhausen.”

Of course, the view enjoyed by the designers must be protected from the eyes of outsiders. The floor plan of the design studio is structured so that only a small part of the building is publicly accessible. The way to the high-security zone of forms and ideas goes through a double security-lock, and this obstacle can be passed only by Porsche designers.

Uninterrupted work is also taking place in the next hall, where interior designers are developing the inner life of the sports car. Michael Mauer places great importance on ensuring that no department stews in its own juices. “If the exterior team lowers the beltline, the interior team has to react to that.” No department is allowed to retreat into its niche.

The requisite transparency and communication are aided by the architecture of the design studio. A good example is the “meeting staircase.” At various levels of this large, white staircase, there is room for inviting colorful furniture: great spots to take a creative break. “In the morning you can grab a cappuccino and a newspaper,” says Mauer, “and casually converse with colleagues about current projects.”

The meeting staircase leads up to the top floor. That’s where the designers have their desks in an open-plan office space. Windows open onto the two halls for the interior and exterior teams. Designers who look up from their own computer screens might catch a glimpse of how the new dashboard is shaping up. Or what the third design department is up to.

At the end of our exclusive tour, Mauer shows the meeting rooms

This department is aptly named “Colour & Trim.” Its workshop was placed at the north end of the building. “Because neutral light is best for evaluating color tones,” Mauer explains. Here, too, there is an atrium surrounded by modern walls. It has an entrance for suppliers that have to coordinate with the color designers. But the entrance is designed so that a paint manufacturer that is called to the devel­opment center cannot lay an eye on a half-finished body. Keeping secrets—a skill that is as well developed here as the designing itself.

At the end of our exclusive tour, Mauer shows us the meeting rooms. He’s proud of them, too, “because they’re in the most beautiful part of the building. Here the energy can flow.” The windows look out on a view of the woods. “It’s quite possible that the occupants might let their gaze wander from time to time. But that’s often helpful. At some point in every project, you just hit a wall. Looking out the window helps free up your thoughts,” explains Mauer.

His enthusiasm for nature does have its limits. “Green is good,” he says, “but only where it belongs.” His designers’ desks are to remain a plant-free zone. He explains: “I’m abso­lutely determined to prevent dust from gathering on weeping fig plants here.”

Text first published in the Porsche customer magazine Christophorus, No. 369