See You Next Summer

The Macan Turbo loves the interplay of the elements of water, wind, and earth. The Hamptons acquire a new quality in the icy blue months of winter, offering visitors empty roads, the joy of deserted beaches, and a wealth of new impressions.

Salt covers the trees like frost. Or is it the frost that covers them like salt? This question accompanies us for a while, as does Route 27. The Atlantic Ocean lies to the right, marshland to the left, and the road stretches out before us. The colors vary only in nuances. And the Agate Gray Metallic paint on the Macan Turbo seems almost gaudy in comparison as we drive along the finger of land known as Long Island.

Off-season for the soul

The storm that was forecast is now whipping across the peninsula, occasionally triggering gentle but firm resistance on the part of the Lane Keep Assist to keep the Macan tracking straight and true. The temperature has dropped over the weekend—is that frost or salt? New York’s backyard, known throughout the world by the familiar name of the Hamptons, makes an even more intense impression in the absence of the many beautiful and wealthy people who swarm here during the summer. Once again, the beach and the land belong to the gray squirrels, the red foxes, the brown cottontail rabbits, and the white-tailed deer. They are out for the same reason as the Macan driver. The promise of empty roads, the joy of deserted beaches, and the riches of a changed world.

The white fluff on the storm-battered trees soon turns to brittle ice on the branches. The empty houses seem to blend into the background. We take the road leading up to a dune. Photographer Richard Phibbs, who is fascinated by great people and great landscapes alike in his search for beauty, gave us this insight for the trip: “The beach allows me to close my eyes and see again.” Thanks to sophisticated systems such as PASM, PTV Plus, and PSM, the Macan masters the slight gradient up to the dune with ease and gives us a chance to confirm that statement. Was Richard right? Absolutely! The ocean, particularly when roiling, is an endless source of inspiration.

To use an idiom currently common in Manhattan, just two and a half hours away by Porsche, we could call what we’re doing at the moment “recharging.” That is exactly what homeowners such as Jennifer Lopez, Billy Joel, Martha Stewart, Steven Spielberg, Donna Karan, Paul McCartney, Alec Baldwin, Robert de Niro, Ralph Lauren, and P. Diddy do here. The sixteen weekends from late spring to early fall are marked by a huge amount of activity. Then nature takes over and provides the highlights once again. Nothing is overheated, nothing is overrun. It all comes down to the right temperature and the right speed. Contemplation in place of congestion. “Soul-driving” is one of the most refined levels of experiencing a Porsche.

That is why the yearning for unbridled freedom can be fulfilled even better and more easily in winter. To be alone with yourself, with the road, and with nature. Nearly every Porsche driver is familiar with this yearning, and most have already fulfilled it on occasion. For them this stormy drive is but a reminder, whereas for everyone else it should have the character of a demand. To find yourself, and perhaps also in some way to re-create yourself.

Driving is so much more than just covering distance

It is the smooth running before the storm. Outside the Macan, there’s stretching your legs briefly on the beach, pulling the zipper of a jacket up to your chin, turning your face to the wind. Feeling. The forces of nature induce humility by virtue of their authority alone. Back in the Macan, sand grinds underfoot on the accelerator. But that is part of the experience. It will be repeated a few times on the way from Southampton to Montauk. Thoughts clear after every short walk, slowly at first, then ever more quickly, while a wealth of new impressions accumulates at the same time. We arrive. Only to set off yet again.

The journey continues on to the lighthouse in Montauk, following in the path of Swiss author Max Frisch, who wrote a novel late in life entitled Montauk. In reality, however, it is more of a journey to oneself, to one’s inner Lane Keep Assist. There are different ways of interpreting what that system does: Does it guide you into the lane, or does it keep you in the lane? Presumably both. Montauk and its cliff known as “The End” are said to be rich in spirituality. That has something to do with the location at this most remote point of New York, stretching out into the Atlantic. But realists should not be put off; they just have to let in this feeling of letting go. Max Frisch also deviated unusually sharply from chronology in his book Montauk. He surrenders to the flow of his thoughts, to scraps of memory, and to reflections on his surroundings. Take a deep breath. And recharge. Live your true nature.

“See you next summer!”

The bookshop on the main road of East Hampton has banished The Social Climber’s Bible to a shelf at the rear and given The Art of Silence the place of honor near the cash register. The flip-flop shop around the corner has cleared out its window, reversed its “Always open” sign on the door, and added the hopeful albeit programmatic message “See you next summer!” Nevertheless, Sylvester & Co., a “modern general store” in Sag Harbor, offers steaming coffee not only on its promotional sign. The swing in the yard behind the building, which looks straight out onto Block Island Sound, answers only to the wind. It all sounds like a sentimental journey. Which it is, in a way. And why not? But it is anything but sad. It is far more refreshing than that. For nature lovers, the leaden sky is a virtually radiant gray. In somewhat less glorified language, we could say that the place has special light. Later on in the afternoon, there will even be an hour of icy blue. If there should be a Zen of driving, then that which the Macan and its passengers are experiencing is something very close.

Henry David Thoreau, who left his job as a teacher in the nineteenth century to live in the woods and is celebrated by city dwellers today as a visionary in the back-to-nature movement, provides the quote of the day: “This world is but a canvas to our imagination.” In the modern world of sports cars, the canvas is replaced by the front windshield. Wild or romantic—why not both? The future lies in the approximate. 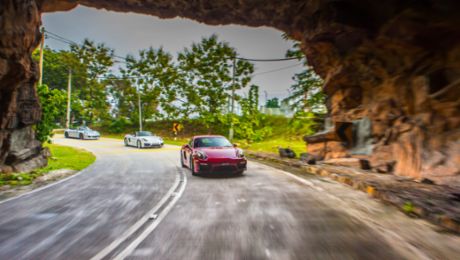 Langkawi Island was the place for a special driving experience. Take a look! 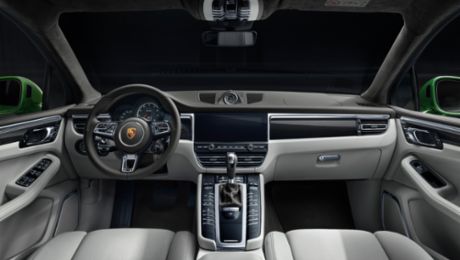 Greater assistance for the driver