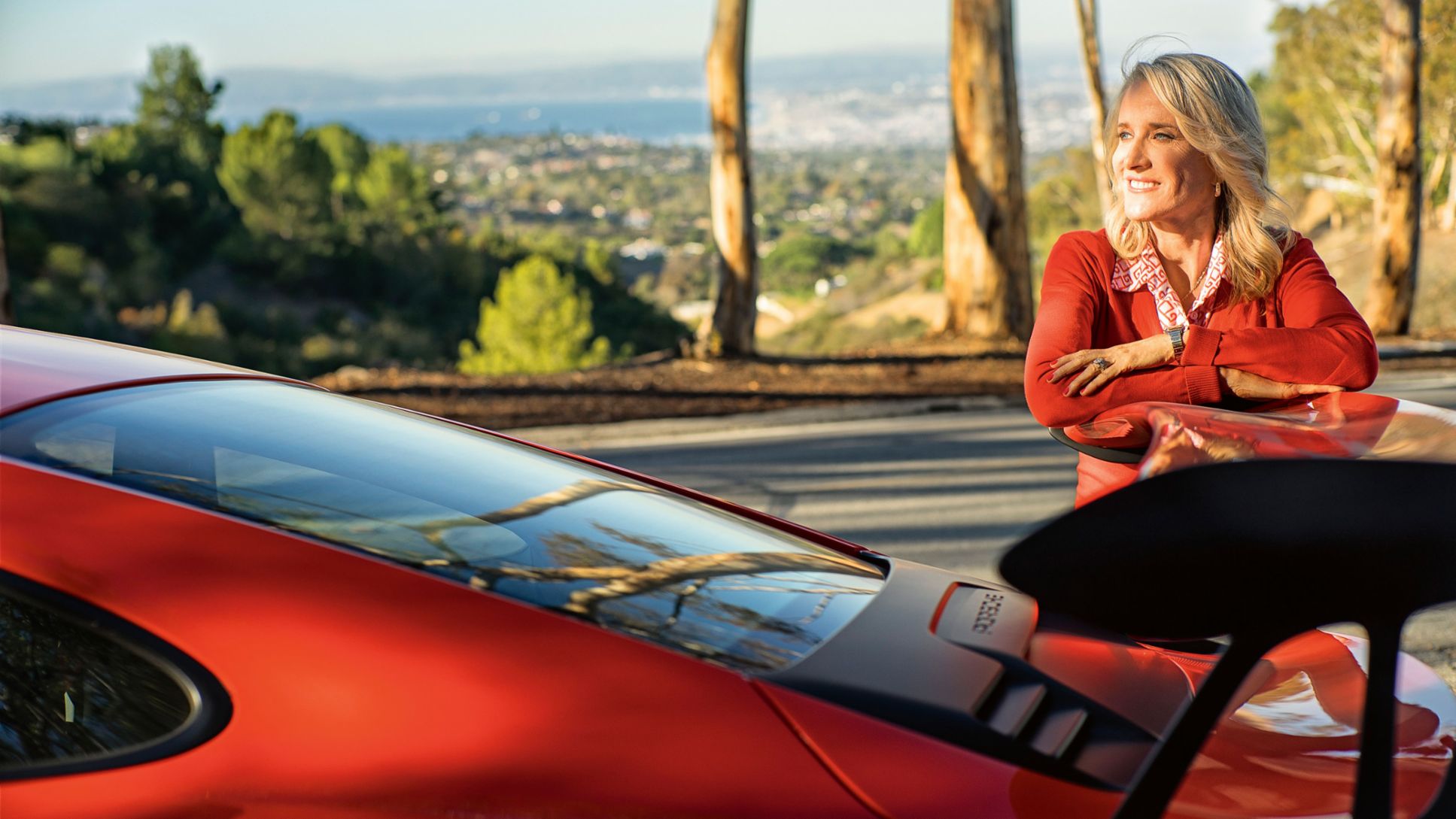 Career with full of ups and downs

Tracy Austin is no stranger to the fast lane. A child prodigy, she won her first Porsche Tennis Grand Prix title in 1978 at the age of fifteen.

Austin’s career as a professional tennis player was fast, full of ups and downs, and comparatively brief—but her passion for Porsche continues to this day. The former world number one returns to Germany for the 40th anniversary of this storied tournament.

There are moments when even Tracy Austin gets carried away—by sheer enjoyment. Driving on winding roads through the hills of Palos Verdes, south of Los Angeles, she steps on the gas. Her Porsche responds to the shot of adrenaline by pushing California’s strict speed limit. Austin laughs as she enjoys this moment, perhaps surprised at herself. “There are tremendous views out to the horizon up there,” she adds with a faraway look in her eye.

Austin climbed high at quite a young age, and the view of the world must have been breathtaking. At fourteen, she was the youngest player to ever qualify for the US Open in New York. In 1978, at the age of fifteen, she won both the singles and doubles titles at the inaugural Porsche Tennis Grand Prix in Filderstadt. She had decided to join the pro circuit just days beforehand. “The tournament in Filderstadt was the perfect start for me,” she says. It launched a dramatic ascent. In 1979, she beat Chris Evert in the finals of the US Open—and she remains the youngest person ever to have won that Grand Slam event. At seventeen, she became the top-ranked women’s player, leapfrogging Chris Evert and Martina Navrátilová, the reigning queens of tennis who had been passing the title back and forth for years. Incidentally, Austin went on to win the Filderstadt tournament the next three years. In addition to the prize money, and despite not yet having a driver’s license, she took home a Porsche each year.

Born into a childhood of tennis

Austin is now fifty-four and drives a 911 GT3 RS. The Porsche Tennis Grand Prix and its prizes kindled a lifelong passion. “We are a Porsche family—we all love these cars,” says the mother of three sons, aged fifteen, eighteen, and twenty. Athletic and vigorous, she stands in front of her personal “wall of fame” lined with framed photos at her home in Rolling Hills. She continues to play a lot of tennis, usually with men because they are more often able to match her power. Her wall of photographs shows the milestones of her sporting career. There’s the three-year-old on a sand court with a racket that’s nearly as big as she is. The thirteen-year-old with pigtails and braces on the cover of Sports Illustrated. And the twenty-year-old at the White House with then President and Mrs. Reagan.

Austin was the youngest of five children in what was essentially a tennis family. Her mother worked at a tennis club not far from Austin’s home today. All of the children played the game, and Tracy started swinging a racket as soon as she outgrew her tricycle. “I would spend hours hitting balls against a wall and was thrilled when I managed to hit ten in a row,” she recalls. At some point the club manager noticed how much she enjoyed what she was doing. He promised her little trophies for ever greater numbers of hits—and ignited her ambition. Austin’s innate ambition distinguishes her from many tennis stars who were, or are, spurred on by ambitious parents. Her father, a scientist, was not overly impressed by her success at the game. “When I asked him once to attend a match against Steffi Graf, he declined on account of a computer seminar.” Austin was not upset by this—on the contrary. The fact that her parents’ love and respect for her was not based on wins took the pressure off and helped her keep a level head.

Grand Slam champion back at school

Keeping her feet on the ground and her nose to the grindstone—this challenge was the same for Tracy the schoolgirl and Austin the tennis pro. “I was the first player to have that much success so young. There weren’t any role models. So I had to try to make all the right decisions on my own.” For example, she decided to stay in high school despite her spectacular career in tennis. Two days after winning the US Open in New York, she was back in class as if nothing had happened. She didn’t enter other Grand Slam tournaments because they conflicted with her tests. Emulating her parents’ capacity for hard work, she was dedicated to meeting expectations on and off the court. Her mother accompanied her to every tournament around the world. She was a mild-mannered coach, says Austin: “I don’t think she ever criticized my play during a game.” Her mother was also there for the first Porsche Tennis Grand Prix south of Stuttgart. “It was held at a small club that had a very family-like atmosphere,” says Austin. “I got the first massage of my life and felt very welcome. And whenever that’s the case, your game gets even better.”

That special atmosphere may also have been one of the reasons why the tournament, which was moved to Stuttgart’s Porsche Arena in 2006, has long been considered one of the top events in the Women’s Tennis Association (WTA). The world’s current number one player, Angelique Kerber, who won the singles title in 2015 and 2016, will play again this year. Based on her own experience of winning the tournament, Austin thinks Kerber has a good chance of taking yet another Porsche home. “Angelique has incorporated more offense into her game, her shots are stronger, and she has gained more confidence,” she observes. The fact that Kerber was twenty-eight before reaching the number one spot shows how the sport has changed over the decades. “You don’t see very young world-class players anymore,” says Austin. Top-level tennis now requires more strength, which teenagers have not yet developed. “The big careers begin later, but they also last longer, because athletes take better care of themselves and their bodies. We didn’t have an entourage of experts and consultants back then—for me, tennis meant being my own coach.”

Since leaving active play, Austin has worked as a TV commentator for the BBC and the U.S. Tennis Channel. Her expertise is also highly valued by her eighteen-year-old son, Brandon, who is pursuing a professional career himself. Mother and son played on the same court at the 2015 US Open, though not at the same time. After Brandon finished his junior match, Tracy Austin played against former rival Martina Navrátilová in the Women Legends category. “I was so worked up from watching Brandon’s match that I could hardly concentrate on my own,” she says, although concentration and the ability to focus have been great strengths of hers during her career.  Constructive and positive thinking is one skill of many that Austin learned from her time as a pro player. “The pain from a loss is greater than the joy from a win,” she says. “And it lasts longer.” The trick is to gain fresh motivation from setbacks and to work on weaknesses. Austin thanks tennis for many of her qualities: her drive, her discipline, and her ability to deal with frustration. Maybe even the ability to be a good mother, for which giving up is not an option. “You have to have confidence in yourself and not be discouraged.” She knows what she’s talking about, because some events in her life have required a strong fighting spirit. In her early twenties, she suffered severe back pain, which did not respond to treatment. In 1983, she withdrew from the sport. In 1989, she barely survived an automobile accident when another driver slammed into her car at over 60 mph. Her right knee was shattered and had to be put back together with pins, resulting in a year-long break from tennis. In 1994, shortly after her induction into the Tennis Hall of Fame, she decided to leave the pro circuit.

Learned to return the hard shots

In the living room of her California home, Austin rolls up her pant leg, revealing a long, thin scar across her knee. “When you’ve gotten up every day of your life with one goal in mind, it’s very hard to give up that goal,” she remarks. “The days without tennis seemed empty to me.” Even so, she learned to return the hard shots that came her way. “It’s a strange thing. The accident had a bigger effect on me than anything else. It taught me to really value life—including the joys beyond tennis.” Like the thrill of a fast drive through the hills of Palos Verdes.

The Porsche Tennis Grand Prix is a flagship tournament of the Women’s Tennis Association (WTA). It will be held for the fortieth time in 2017. Over recent years it has repeatedly been chosen by the players themselves as their favorite tournament of its category in the world. Tracy Austin, who won it the very first time it was held, will attend the upcoming anniversary. It will bring thirty-two leading international players to Stuttgart’s Porsche Arena from April 22 through April 30—including Angelique Kerber, the world’s current top-ranked player. “Stuttgart is my home event,” says Kerber, a native of Germany and a Porsche brand ambassador. “I’m looking forward to the very special atmosphere and the fantastic spectators.” Other players at the tournament will include Dominika Cibulková of Slovakia, who was Kerber’s opponent in the WTA Finals in Singapore, and Agnieszka Radwańska of Poland, who is ranked third in the world and who won the WTA Finals in Stuttgart in 2015. 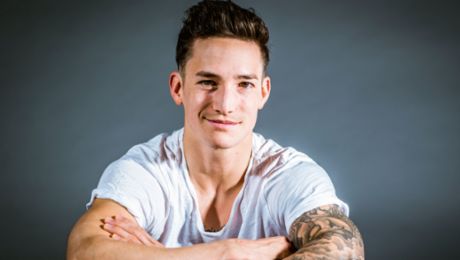