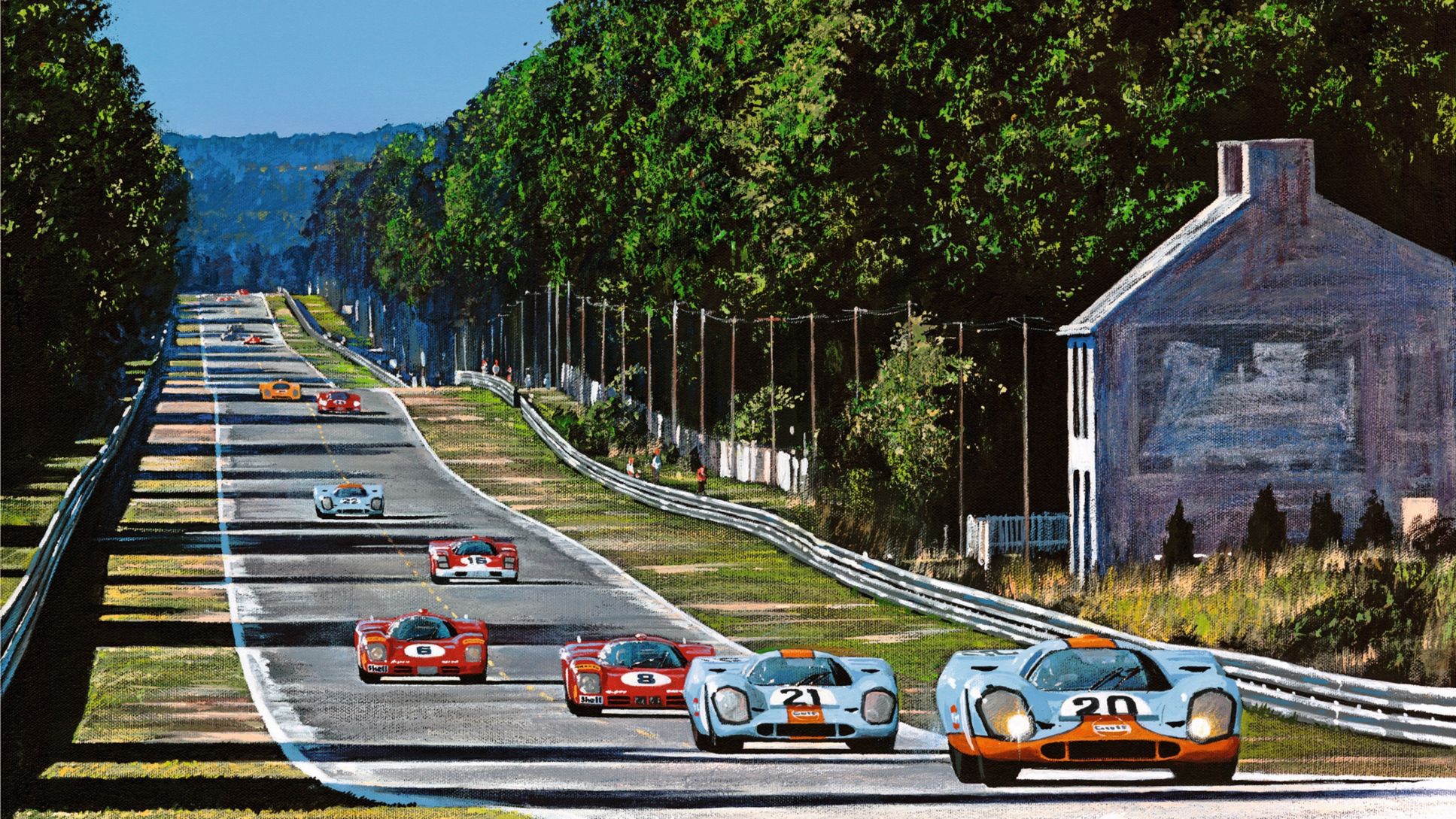 Tim Layzell paints racing scenes. His aim is to enable viewers to feel their power and speed. Many of the world’s races are captured on his canvases.

Whenever thirty-six-year-old Tim Layzell applies the first strokes to a blank canvas he feels a little apprehensive. “Will it turn out the way I want?” He’s familiar with doubt—but not with fear. So he plunges into the process of painting. “In the past a few things didn’t work out so well,” he says. “But that’s no longer the case.” Layzell has acquired a sense for what counts. After all, he has been drawing cars since the age of three. His parents brought him along to vintage car events even before he could walk. A few years later he would sit at a table and draw racing cars from photographs. At thirteen he won the Young Motoring Artist Award for contestants up to the age of twenty-three. He was already selling his first works at the time. One of his early inspirations was his uncle’s Porsche 911 Carrera 2.

College never seemed to be the right choice. Automotive design might have interested him, but that passion is also somehow expressed by painting. “It’s my dream job,” says Layzell. He, his wife, and their two children live in an old house outside the city of Bristol. One small wing serves as his studio. There he sits, gazes out of the window, derives inspiration from nature, and listens to classical music. Any other type of music, like jazz perhaps? No, that musical cliché of the artist doesn’t hold.

The canvas stands in front of a television set. Layzell peeks around it on occasion to watch sports events or movies. And he paints—rapidly, with intense concentration. He creates up to fifteen images per year of legendary racing cars, portraits of famous drivers, or depictions of notable racing scenes. The research can be so extensive that a single work might require months of preparation. “Many of the older photos are black and white. So the color of the cars is a very interesting question.” Every detail is important. For example, who was out ahead of whom at which race? “That all has to be right.” Two-thirds of his paintings are commissioned. And his art is so much in demand that his brother has had to take over part of the research.

The power of Layzell’s work, whether realism or pop art, lies in his ability to capture speed with a brush and paint. The cars are frequently at an angle, the drivers are gazing down. He starts by darkening the canvas with blue hues, and then brings back the light. This lends contrast to his images. It’s an unusual effect. “People like it when paintings are charged with light.” His eyes light up. “All little boys like to draw cars. And I can still do it, which is a great feeling.” There’s just one wish still unfulfilled. “I wouldn’t mind doing more racing myself.” He used to enter hill-climbing contests but doesn’t have the time for that right now. “Some day I will,” he hopes. That day is sure to come.