At Porsche, the ‘GTS’ acronym represents an extra dose of sportiness across all model lines – both visually and in terms of driving dynamics. The three letters, which stand for Gran Turismo Sport, first entered the annals of Porsche history in 1964, when a 904 Carrera GTS won the legendary Targa Florio. The inspiration for the GTS models of the present day, on the other hand, came not from a racing car but from a luxury SUV: the Porsche Cayenne.

With the current E3 generation, two Cayenne GTS variants were launched in 2020: the Cayenne GTS and, for the first time, the Cayenne GTS Coupé. Both vehicles boast impressive cornering dynamics and continue the success story of the Cayenne GTS models. Equipped with a 4.0-litre V8 biturbo engine, both GTS models deliver a throaty sound, 338 kW (460 PS; Cayenne GTS: Fuel consumption* combined (WLTP) 14.1 – 13.3 l/100 km, CO₂ emissions* combined (WLTP) 319 – 301 g/km; Cayenne GTS Coupé: Fuel consumption* combined (WLTP) 14.0 – 13.3 l/100 km, CO₂ emissions* combined (WLTP) 318 – 302 g/km) of power and 620 Nm of torque. Sport-tuned suspension and the exclusive interior ambience found in all GTS models are naturally included as standard. Its popularity with customers continues unabated: in Europe and North America, some 10 per cent of all Cayenne customers opted for a GTS model in 2021, and the figure was even higher in the home market of Germany, at 16 per cent. 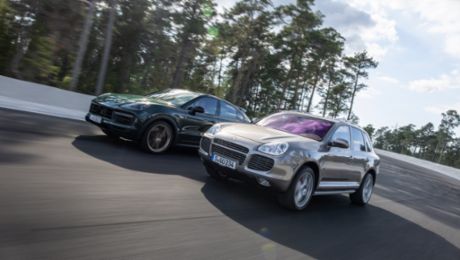