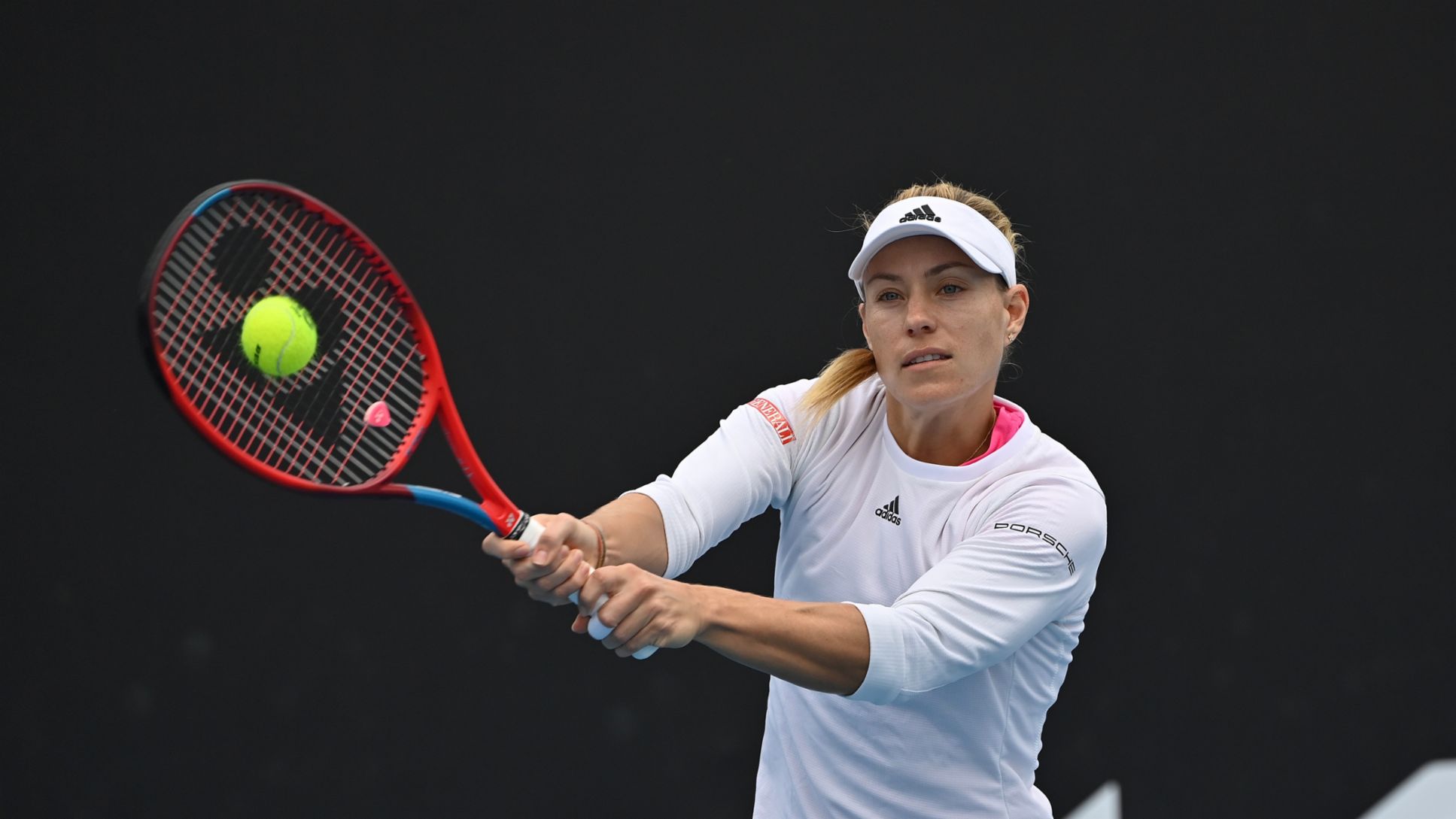 After two weeks of quarantine, only a few days now remain for Angelique Kerber to get back into form for the Australian Open. In an interview with Porsche Newsroom, she explains how she spent the time alone in a hotel room, how she will be practicing and her expectations going into the year’s first grand slam tournament that begins in Melbourne on 8 February.

“It’s not yet the right time to set big goals,” said the Porsche Brand Ambassador and two-time winner of the Porsche Tennis Grand Prix. “I’m just simply looking forward to going out on court again in front of the fantastic fans. I’m going to enjoy it to the full.”

Angelique, what was your feeling when you were able to leave your hotel room for the first time in two weeks on Friday evening?

Angelique Kerber: “It was a beautiful, liberating feeling to go out into the fresh air and then being able to hit the first balls around midnight. Melbourne is one of my favourite cities on the tour. It made me all the happier to have the feeling of arriving here fully and to not only see the fantastic skyline through the windows. For me, it’ll now be all about getting into the grove in the little time and very few on-court sessions and making good use of the days up until the Australian Open.”

How did you spend the first days after quarantine?

Kerber: “Due to the short time we have to prepare, the first priority for me is obviously the on-court practice sessions. That’s what I’m focussing on. As we can move around Melbourne freely and all the restaurants and shops are open, it was a nice change to go out to eat again with my team. A trip to St Kilda Beach was, as every year, also a part of things.”

You prepared very hard for the Australian Open. How good did you feel and how much were you looking forward to playing?

Kerber: “One always very much looks forward to the start of the season in Australia. The prospect of playing again in front of enthusiastic fans in the stadium in which I won my first Grand Slam in 2016 motivated me in the last few weeks to go to my limit when practicing. The postponement of the start of tour meant I had significantly more time to prepare than usual. Now I have to be realistic and see how much I can catch up on after not holding a racket for two weeks.”

What does it mean for an elite athlete not to be able to train for two weeks before the season’s first highlight? How have you tried to compensate for it?”

Kerber: “It’s obviously everything but ideal. Though I tried not to lose too much of my basic fitness through the daily workouts in the hotel room, the on-court sessions cannot be compensated for in any way, and in no way ahead of a grand slam. The short sprints, the specific tennis actions, stroke repetition and match practice – it's all gone to a certain extent. Nevertheless, I tried to make the best out of the situation. In my room, I had a little fitness corner with a mat, loose weights, a medicine ball and a treadmill. It was naturally very helpful.”

How did you come to terms with the situation? What did you do?

Kerber: “In the last few years, I’ve learned to remain calmer and not to get annoyed about things I can’t change anyway. It means I have also come to terms with this situation quite well. I accepted everything right from the start. In corona times, there are so many people suffering serious strokes of fate and fearing for their livelihoods. Two weeks of quarantine in a hotel room in contrast is nothing one should complain about. I tried to give the days a solid structure containing regular fitness sessions and welcome distractions like the Netflix series ‘The Crown’ and the ‘The Queen’s Gambit’.”

How did you celebrate your birthday on 18 January? We heard you did a lot or telephoning?

Kerber: “Here again I had to improvise a bit. After all it was a birthday that I won’t forget so quickly. As I was not allowed to leave the hotel room during quarantine, I facetimed with many friends and I took the time to read and answer all the lovely messages.”

“I’m just amazed at the tournament organisers efforts in the time. It was a real Herculean task that they performed out in a friendly and committed way towards us players.” Angelique Kerber

How did the Australian Open organisers look after you?

Kerber: “I’m just amazed at the tournament organisers efforts in the time. It was a real Herculean task that they performed out in a friendly and committed way towards us players. We were informed every day about the latest developments as a part of the telephone conferences. The Australian government’s strict but totally justifiable quarantine regulations meant that we were tested every day.”

Wednesday sees the start of the Grampians Trophy, an additional warm-up tournament specially for players that were in quarantine. Will you be playing?

Kerber: “In principle, I think it’s a good idea. Before a grand slam, it’s very difficult to get match practice. But for me it is all about firstly finding my rhythm in the few practice sessions I have after quarantine and again getting used to the physical pressure on the court. There’s a big difference between practice and matchplay. Decisive for me is how my body reacts to the increasing intensity when practicing. Currently, I’m feeling pretty good and have also signed up for the tournament.”

The players without a corona case on the plane can now leave their hotel for daily practice, the others can’t. Can one speak of a level playing field?

Kerber: “The conditions in the two groups were actually very different. Nobody denies that. I for myself accepted it and feel it’s not very helpful to get annoyed by it all. Far more, we should be glad that the Australian Open will take place in the first place.”

Which expectations do you still have before the year’s first grand slam?

Kerber: “I see things realistically. It’s definitely not the time to set big goals. I’ll try everything possible to catch up on my lack of practice before the start of the Australian Open. For me, the joy at being back on court again predominates.”

The Australian Open has always been one of your favourite tournaments. Has anything changed?

Kerber: “No at all. The Australian Open has always been very important for me in my career. It’s a tournament that’s dear to my heart, one with many wonderful memories, above all naturally in 2016 when I managed to win my first grand slam in Melbourne. The Australian fans have always given me a warm welcome and supported me in the last few years. It was one of the decisive reasons flying to Australia at this moment in time.”

“The Australian Open has always been very important for me in my career. It’s a tournament that’s dear to my heart.” Angelique Kerber

What happens after Melbourne? What are the next highlights for you?

Kerber: “Like in previous years, my focus is on the big tournaments. As we are still right in the middle of the pandemic, it’s not easy to make advance plans for the season. Therefore, I and my team have set intermediate goals and I’m now concentrating fully on the Australian Open. And then we’ll see what happens.”

Which tournaments are you particularly looking forward to?

Kerber: “I’m particularly looking forward to the tournaments in Germany, starting with the Porsche Tennis Grand Prix in Stuttgart in April. I really hope we’ll have the pandemic under control to some extent by that time. It’d be unbelievably nice to see the fans again soon in the Porsche Arena in, as far as it is possible, safe surroundings. That organisers offer tournaments despite the difficult prevailing conditions is something we just can’t appreciate enough. Societally, we are currently having to deal with big challenges and sport is of course secondary. However, it is also a step back towards normality, as long as the safety of everybody involved is guaranteed.” 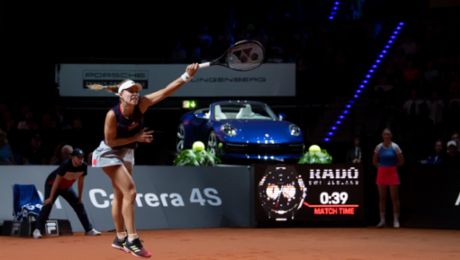 Angelique Kerber to play the US Open in New York

Angelique Kerber made a final decision: The Porsche Brand Ambassador will play the US Open. 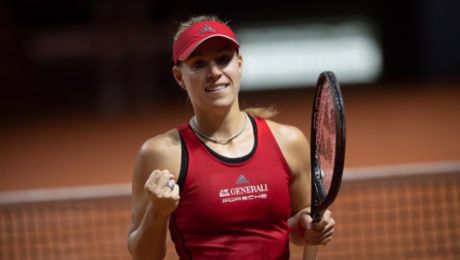