Graffiti is an important part of hip-hop culture - the corporate identity of the street. For Back to Tape, the three writers Scotty76, Fuego Fatal and Yugo visualise the idea of the book ‘Hip-Hop Culture - A Road Trip through Europe'.

Colourful graffiti art is part of the cityscape in many places today. As an element of hip-hop youth culture, it took shape in New York in the 1980s. But its origins lie many thousands of years before that: as one of the earliest forms of expression in human history, our ancestors transmitted their knowledge, beliefs and experiences through cave paintings. This form of communication has not died out throughout history. Whether in ancient Egypt or among the Vikings - many later cultural forms also made use of drawings on the wall. "Every generation has its chroniclers," says Scotty76. "We are the ones of hip-hop culture." The Stuttgart graffiti artist should know. The proof is tattooed on his body: Hip-Hop is my Life.

Together with Frankfurt's Fuego Fatal and Hamburg's Yugo, he turns the recently published book, ‘Hip-Hop Culture - A Road Trip through Europe’ into legally sprayed artworks. It is part of the ‘Back to Tape’ content series with Niko Hüls.  "The goal of Back to Tape was always to seek dialogue with the street - and to understand hip-hop holistically, not just as a music genre or clothing style," explains Hüls. This is how the idea was finally born to have three different scene greats of German graffiti culture accompany the work on a travel and cultural guide about hip-hop in Europe. "I told Scotty, Fuego and Yugo about my road trip - and they got started and created a graffiti artwork in their very own style at a legal location."

Growing up in the Emmertsgrund district of Heidelberg, Steve Patzschke, as he is called in real life, never let go of his paintbrush, even in kindergarten. Colours inspire him, just like music. He raps, sprays and dances. Today he is one of the most influential graffiti writers in Germany.

Jorge Labraña is known in Frankfurt under his hip-hop synonym Fuego Fatal. He is an ambassador for Frankfurt's subculture, rapped in legendary crews like Nordmassiv and Binding Squad, owns his own fashion label and combines street art and lifestyle in his studio. With graffiti workshops, he passes on the cultural spirit of the movement to the next generation and actively engages in dialogue with local politics.

Yugo has been part of the local graffiti scene in Hamburg for almost 30 years. The trained graphic designer is also inspired by the early pieces in New York, birthplace of the worldwide hip-hop culture. There, graffiti was a phenomenon long before today's youth culture: on 21 July 1971, The New York Times reported on the penchant of a Greek-born messenger boy to leave his pseudonym TAKI 183 on various walls during his errands through the city. Tagging was born. When German television first broadcast the feature film Wild Style about the life of the teenage graffiti sprayer Zoro on 7 April 1983, creative street art spilled over into Germany.

"Graffiti is an essential part of Back to Tape," explains Hüls. Hall of Fames are special points of attraction for the Hamburg music journalist on his travels. These are open places where free space is made available for graffiti art on behalf of the city and writers of all ages and backgrounds can create modern street art together - like the gallery in Stuttgart-Bad Cannstatt. They are a special place for all hip-hop fans.

The Porsche Newsroom presents four international graffiti writers from the Back to Tape universe:

The graphic designer El Xupet Negre is considered a pioneer in the field of logo design and one of the most influential graffiti artists of the past 20 years. In his hometown of Barcelona, he made a significant contribution to making street art and spraying an elementary part of urbanisation. In 1987, his trademark appeared here for the first time: a baby’s dummy, or pacifier, in black.

Nicolas Couturieux is an art curator, hip-hop producer and editor - a veteran of the Parisian creative scene and yet firmly rooted in the hip-hop system. Couturieux, who regularly exhibits in Paris, Nancy and Toulouse, has an ambitious goal: he wants to establish graffiti as contemporary art and exhibit it in the biggest museums in France.

Lars Pedersen is a European graffiti legend. He developed the Roskilde Festival into a real place of pilgrimage for breakdancers and street artists from far beyond the borders of Denmark, and indeed maintains contacts all over the world. His works from the Institute of Urban Art, founded together with Peter Skensved, can be seen in more than 40 countries today. Curated by Lars Pedersen, 470 metres of graffiti art on the history of humanity in Copenhagen is one of the most important hip-hop venues in Europe.

Around the world with hip-hop: Stuttgart tattoo artist Scotty76 is 25 years of living hip-hop culture. He danced in the videos of Torch, Toni-L and Advanced Chemistry, travelled China and the USA with hip-hop, was part of the Southside Rockers and experienced the birth of the Stieber Twins in Heidelberg and their legendary album ‘Fenster zum Hof’. At the age of 12, Scotty76 first got involved with graffiti and the design of artwork, record covers, sculptures and canvases. Today he runs a successful tattoo studio in Stuttgart and works for brands like adidas and Converse.

The book ‘Hip-Hop Culture - A Road Trip through Europe’ can be ordered now for 24.90 euros at www.back2tapebook.com. Porsche and Niko Hüls will donate all proceeds from the sale of the book to Viva Con Agua. The non-profit organisation gives people around the world access to clean drinking water and basic sanitation. With its WASH project (Water, Sanitation, Hygiene), Viva Con Agua provides a better water supply in many countries, including Uganda, Ethiopia, Mozambique and South Africa.

Niko Hüls and Porsche produced their European road trip before the outbreak of Covid-19. Porsche, Backspin and the artists involved are aware of their social responsibilities and are advising against recreating such a trip until it is safe and travel is permitted. 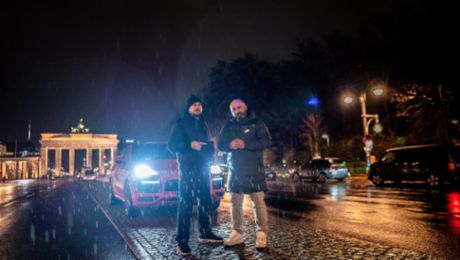 Back 2 Tape: #askmeanything with Niko Hüls

Music journalist Niko Hüls answers questions from the community about the hip-hop documentary "Back 2 Tape". 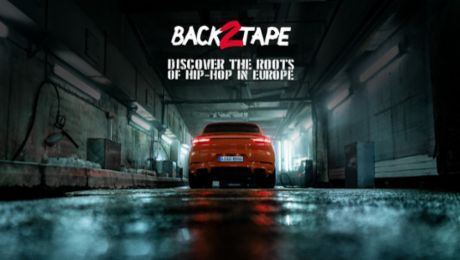