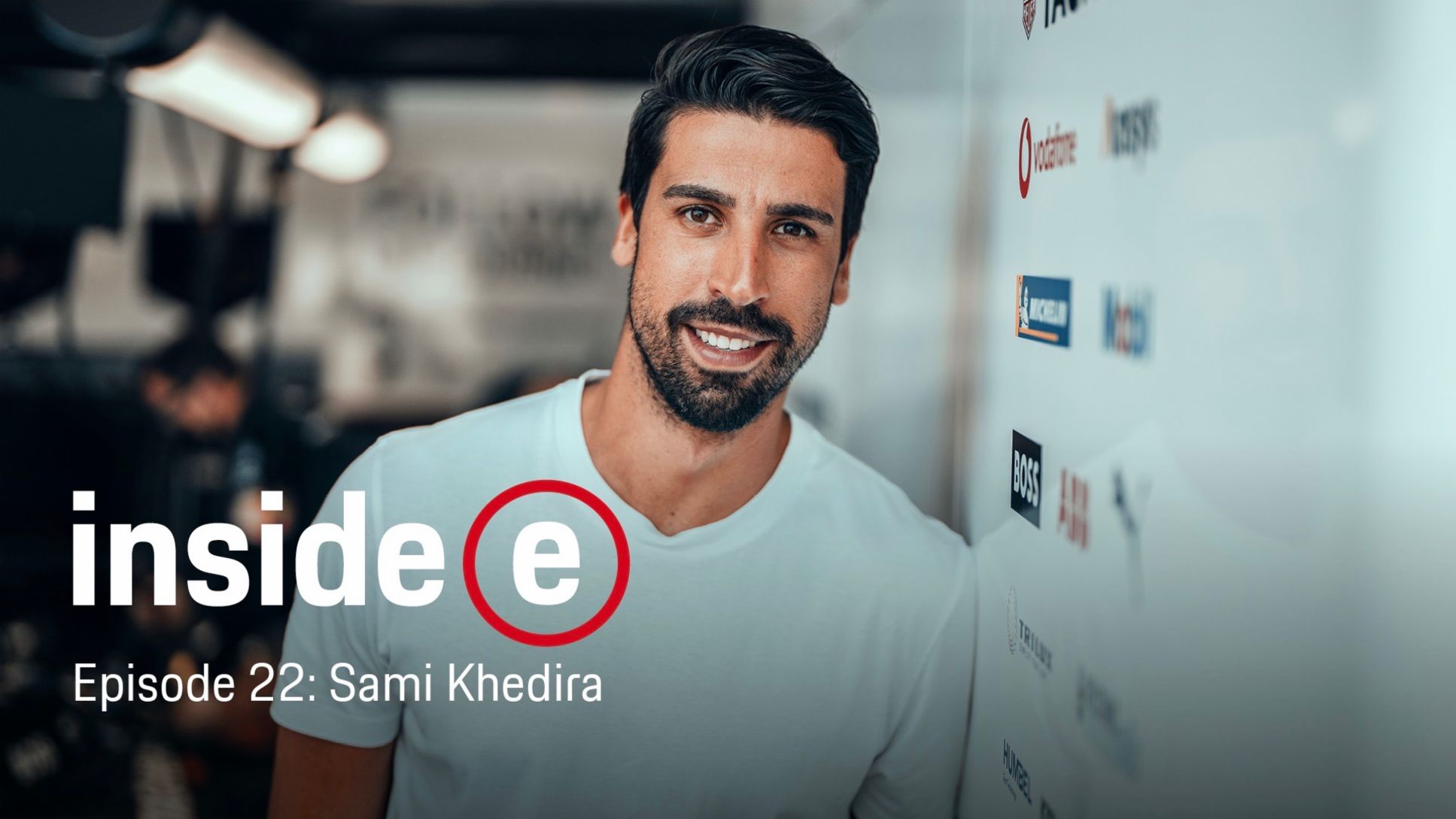 In the latest Inside E podcast, Sami Khedira talks about his excitement at supporting and sharing his experience with talented young people in their sports and personal development. He also reveals what it was like to visit the TAG Heuer Porsche Formula E Team at the Berlin E-Prix.

Sami Khedira has done it all as a footballer. Winning the 2014 FIFA World Cup for Germany was the highlight of his career. After retiring from the sport in May, he is now devoting himself more to his role as ambassador of Porsche’s Turbo for Talents youth development programme.

“Of course I miss football, but I’m looking forward to what the future holds. Life offers so much.” Sami Khedira, 34, has lived the dream. As a young boy, he yearned to be a professional footballer, play in the German Bundesliga and win major tournaments as a national player. All of these dreams came true: from winning the German championship with his home team VfB Stuttgart to clinching the world cup title in Brazil. “I’m very lucky that I was able to have these wonderful experiences and I’m grateful to everyone who made this possible.”

“You have to be passionate about what you do. If you don’t feel it and love it, then stop and do something else." Sami Khedira

As an ambassador for Turbo for Talents, he aims to give something back to his sport and assist in paving the way for as many children and young people as possible to follow in his footsteps. “It wasn’t easy for me to become a professional either,” he says, “but I got the chance to train in great clubs with professional coaches.” Not many get such opportunities. He wants to help them find their role in life through sport. What does it take? “First the talent, then the right attitude, and most importantly, respect,” he says. “You have to be passionate about what you do. If you don’t feel it and love it, then stop and do something else. But if you’re certain of what you want to do, then work hard and regard every day as a chance to become a better athlete and a better person.” 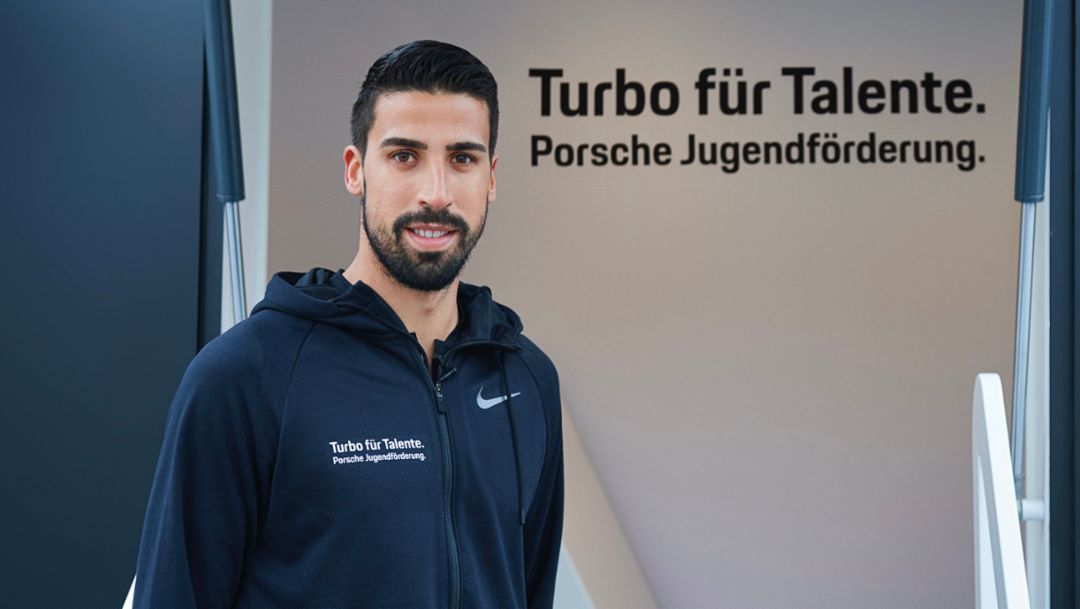 As the Ambassador of the Porsche Turbo for Talents youth development programme, Sami Khedira has been passing on his wealth of experience as a professional sportsman to up-and-coming young people since 2018.

Khedira was evidently impressed by the TAG Heuer Porsche Formula E Team during his visit to the Berlin E-Prix. In terms of professionalism and mental fortitude, he says he noticed obvious parallels to football. Values such as respect, teamwork, passion and team spirit are as important prerequisites for success on the racetrack as they are in Porsche’s youth development programme. Turning fast laps on the Tempelhof Airport Street Circuit as a passenger in the Porsche Taycan Turbo S was a life-changing experience for him. “Initially I was really nervous, but then I enjoyed it more and more. It was like a rollercoaster ride,” he says. “It’s unbelievable how fast electric cars are and how professionals handle them. I’m very grateful to have had this experience.”

Through Turbo for Talents, Porsche is committed to supporting talented young people in various sports throughout Germany. In football, partnerships exist with RB Leipzig, Stuttgarter Kickers, SG Sonnenhof Großaspach and Borussia Mönchengladbach and FC Erzgebirge Aue. In ice hockey, Porsche sponsors young talent for the Bietigheim-Bissingen Steelers. In basketball, Porsche is the named sponsor of the Ludwigsburg Porsche Basketball Academy (BBA) – the squad school of the MHP Riesen. The commitment is not just about supporting high-quality training in sport, but also about the social and personal development of the children and young people involved. World Cup winning footballer Sami Khedira is one of the programme’s best known supporters. Find out more about Porsche's wide-ranging youth sponsorship programme at: www.turbofuertalente.de.

The Porsche Formula E podcast is published in English and can be downloaded from the Porsche Newsroom. Inside E is also available on other platforms such as Apple Podcasts, Spotify and Google Podcasts. 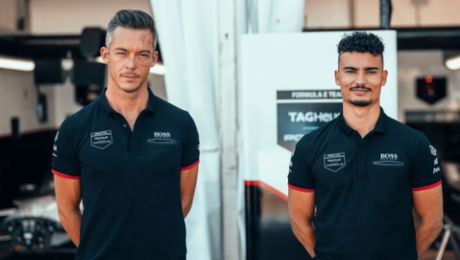 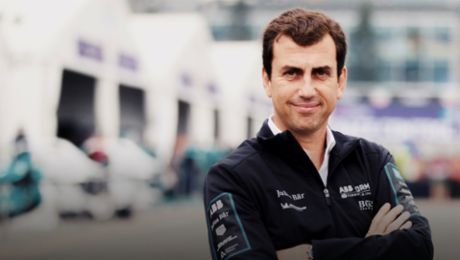 It was through searching for new challenges that Alberto Longo came to motor racing a good 20 years ago. 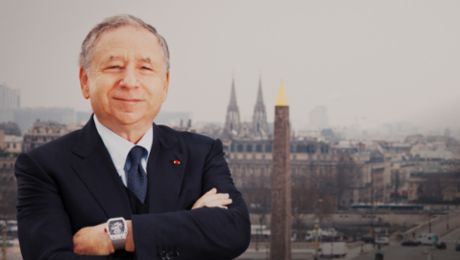 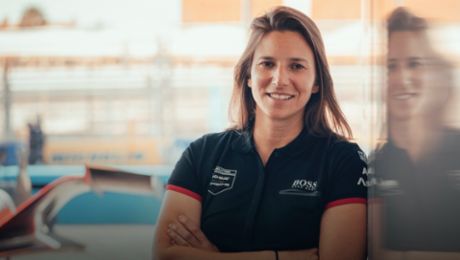