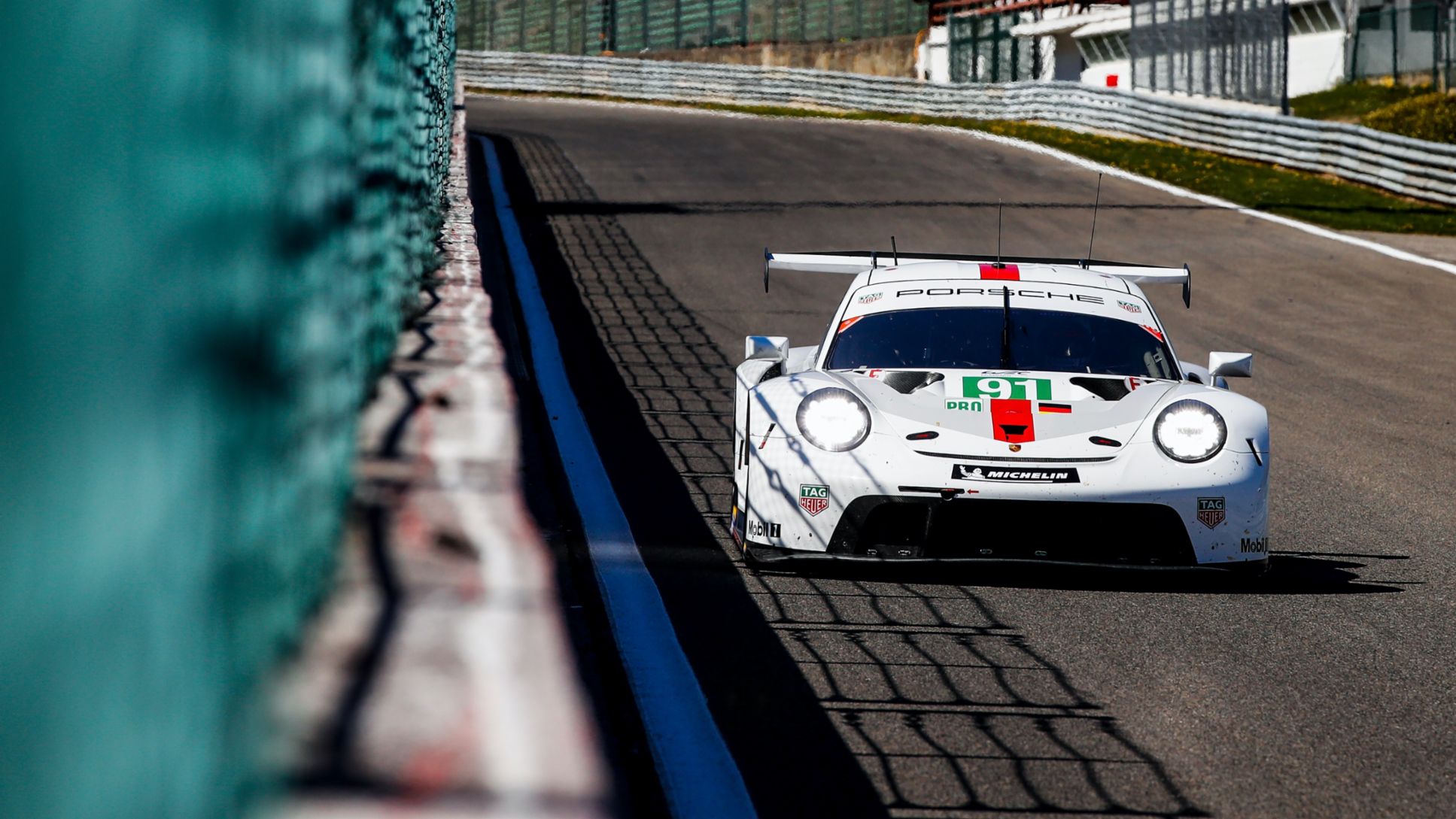 The FIA World Endurance Championship (WEC) will compete on the storied Monza racetrack for the first time this coming weekend (16-18 July). For the Porsche 911 RSR’s outing on Italy’s high-speed circuit, the focus will be predominantly on maximum speed and braking performance.

“Driving at Monza is always something very special. I can hardly wait to finally put my foot to the floor of the 911 RSR,” says works driver Gianmaria Bruni, who shares the cockpit of the No. 91 car with Austria’s Richard Lietz. The anticipation among the team is huge. Hardly any other racetrack gets to the very heart of motor racing like Monza: pushing vehicles at top speed to the absolute limit.

“When I enter the paddock at Monza, I always get goose bumps. The unique track characteristics and the rich history always bring a smile to my face,” describes Adam Hardy, the race engineer of the No. 92 Porsche 911 RSR driven by Kévin Estre and Neel Jani. The Briton adds: “At last we go racing at Monza with the FIA WEC. It’ll be a real spectacle for the fans and a huge challenge for us engineers.” The Porsche GT Team is familiar with the Autodromo Nazionale di Monza from the 2017 prologue of the world endurance championship as well as several tests on the 5.793-kilometre circuit in the Royal Park of the city in Lombardy with its 120,000 inhabitants.

“Nevertheless, these insights won’t help us much this coming weekend,” says Hardy. “We took part in the prologue five years ago with the predecessor version of the 911 RSR. Our private tests were always about preparing for Le Mans – so we opted for a completely different aero package.” In the FIA WEC, a modified kit can only be used at the season highlight, the 24 Hours of Le Mans. For the upcoming six-hour event, a version will be implemented that has been homologated for all of this year’s races, except for Le Mans, and cannot be structurally changed. “This means that we have to trim our Porsche 911 RSR with the high downforce package at Monza to ensure as little drag as possible,” explains Hardy. “We set the rear wing as flat as possible and adapt the ground clearance to achieve 270 km/h and even more on the long straights. But we have to be careful because the car needs to maintain stability under braking – otherwise you lose a lot of time.” 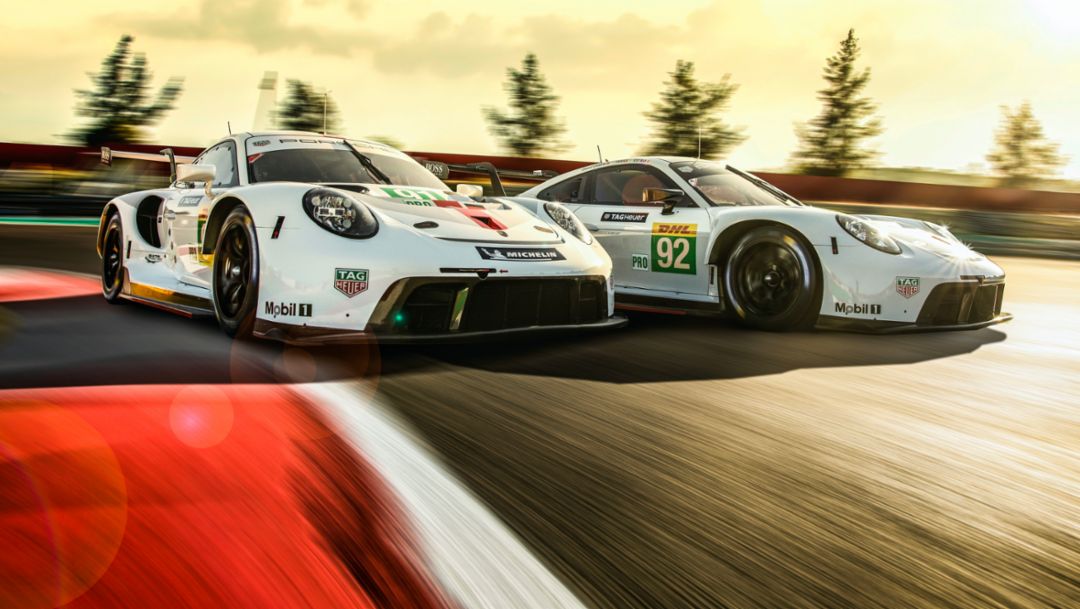 Porsche aims to reclaim its world championship lead at Monza

The Porsche works team is well prepared as it travels to round four of the FIA World Endurance Championship (WEC) in Monza.

In addition to sheer top speed, a well-balanced vehicle is the key to success at Monza. High speeds on the long straights, maximum braking performance before the Variante del Rettifilo and Variante della Roggia chicanes, and the best possible traction for exiting the corners are essential. On the other hand, downforce is required in the faster corners such as the two Lesmo right-hand kinks as well as the Variante Ascari and the famous Parabolica. “As is often the case, we’re looking for an ideal compromise between downforce, aerodynamic drag, traction and balance,” states the successful race engineer who, among other achievements, has claimed class victory at Le Mans in 2018 with ‘his’ number 92 car. “With the brakes, we have to ensure that the temperature peaks are not too high,” the Briton elaborates. “When the brake discs and pads show little fluctuation in the readings, the system performance is more constant and thus more predictable for the driver – this is particularly critical heading to the first chicane, where we have to decelerate from around 270 km/h to 63 km/h within metres.”

“We drop the anchor before Rettifilo and we have to totally trust that the car will decelerate perfectly every time,” explains Gianmaria Bruni before his home race. “But it’s equally as important that we can accelerate well out of the corners.” This is precisely where the Porsche 911 RSR’s 515 PS flat-six engine comes to the fore: with 75% of a lap taken at full-throttle, in this respect, Monza is even slightly more extreme than the legendary Circuit des 24 Heures at Le Mans. “The long full-throttle passages are no problem for the engine,” explains Alexander Stehlig. Porsche’s Head of Operations FIA WEC adds a surprising comment: “The worst thing for an engine is when you drive slowly.” Sufficient cool air flows to the power unit on the long straights at Monza. “The engine is fine no matter if it’s revving to 8,500 in fourth or sixth gear – the main thing is that the temperatures stay within reasonable limits. It would be an issue on a street circuit with a stop-and-go layout, but never at Monza,” Stehlig maintains.

However, the long full-throttle passages have one downside: fuel consumption is at the upper end of the scale. “Monza and Spa-Francorchamps are the fuel-guzzlers on the calendar,” confirms Adam Hardy. “But we operate on the assumption that one tank of fuel is enough for about an hour of driving. If this is the case, then the race normally consists of six stints – as long as the safety car phases don’t require any changes to strategies.” As part of the preparations, the team tacticians play through such scenarios. When is an early and therefore additional pit stop worthwhile? When is strict fuel economy necessary behind the safety car in order to prolong a stint? The answers to these questions will already be on the table before the start of the six-hour race on 18 July. The Porsche GT Team has prepared systematically. “We’re heading into the race with an extra portion of motivation,” emphasises Hardy, and adds with a smile: “Monza is Ferrari’s home race – our main rival in the GTE Pro class. We’d love to beat them on their home turf.” 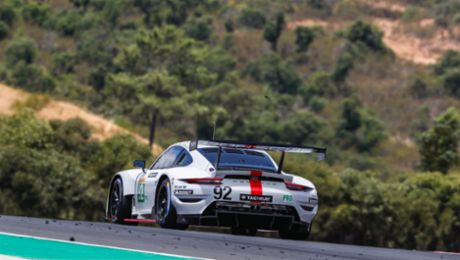