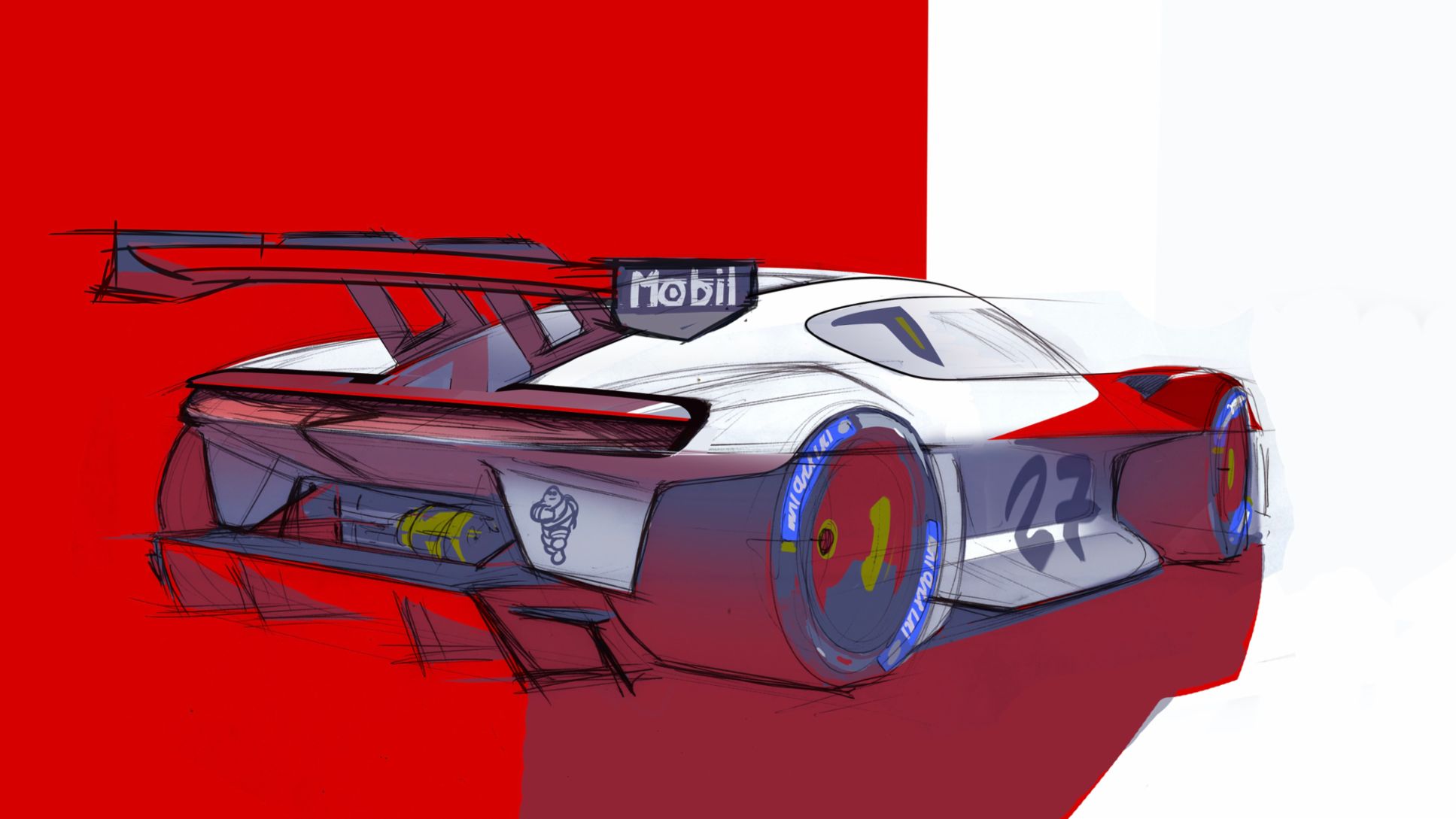 "Every Porsche has to be clearly recognisable as a Porsche. Many elements that we envisage in studies find their way later into production cars. This also applies to motorsports. Moreover, our customer sports vehicles are always based on production sports cars," explains Michael Mauer, Head of Style Porsche. "What this means in the case of the Mission R is that the car is packed to the gills with signs that hint of a future production model, and that, of course, means pure racing!“

The narrowly shaped cabin reduces the frontal area of the racing car and contributes to its outstanding e-performance due to lower air resistance. Cameras are mounted on the edge of the roof as a digital replacement for conventional wing mirrors.

The colour concept is dominated by Porsche's standard Carrara White Metallic satin finish. By contrast, the front bonnet and front wings are painted in a high-gloss bright metallic red. This new shade extends into the doors, where it ends with a dynamic sweep. The spoilers are black to provide a sharper contrast.

Due to the transparent surfaces of the exoskeleton roof (see body and chassis section), the silhouette of the Mission R appears even lower than it actually is. The purist design approach is defined by the sleek cabin (the greenhouse), the roofline that slopes sharply downward to the rear (the flyline) and the pronounced shoulders of the wings. Much like the Porsche Cayman, the window graphics (daylight opening) end at the C-pillar with a counter-sweep.

The A-pillars are black and visually blend the side window surfaces into a single unit, reminiscent of a helmet's visor. Another characteristic Porsche feature is the curved windscreen, which extends slightly around the corners. Form follows function – the driver benefits from better all-round visibility as a result.

Below the car’s waistline, things get technical and functional: the sills are recessed, which makes the aero underbody even more effective. As is the case with the front splitter and the large diffuser at the rear, the underbody panels are not painted so that the natural fibres are visible. The Mission R runs on 18-inch Cup centre lock wheels featuring a five twin spoke design. With polished carbon aeroblades in high-gloss black, they are also flow-optimised.

There are panels located in front of and behind the wheel arches. If they become damaged as a result of contact with other vehicles during a race, they can be replaced quickly. Yellow arrows indicate where their quick-release fasteners are located. Other functional parts that might need to be quickly accessed are identified with yellow arrows too. They include levers, pins and panels, and the compressed air connections for the lifting system located in the C-pillars. The roof module is reminiscent of the profile of a submarine. Among other things, it incorporates a pitot tube to measure speed, and an LED display to indicate the operating status of the high-voltage system.

Light emblem in the style of the electric Porsche

In characteristic Porsche style, the front bonnet slopes down between two sharply curved wings. The large triple-louvred side air intakes, the front splitter with its visible natural fibre mix and the flat LED headlights dominate the nose. The four-point light emblem is based on the design of the headlights on the Taycan electric sports car. Two vertically aligned towing lugs link up the front splitter and bumper visually. Since these are functional parts, they are also painted yellow.

The rear of the car is dominated by the two aerodynamic components – the diffuser and the two-section spoiler, which is made of carbon. The designers have integrated the brake and rain lights into the profile of its wing plates. This makes them easily seen by following drivers, even in spray.

At the rear, there is the signature Porsche light strip. It consists of a large number of illuminated vertical elements to the right and left of the lettering, which is also illuminated. The towing lugs at the rear are highlighted in colour, which is normal practice for racing cars. What makes them special is that they have been seamlessly integrated into the supporting structure of the vehicle. The charging connection for the battery is located in the middle of the rear window behind a flap. 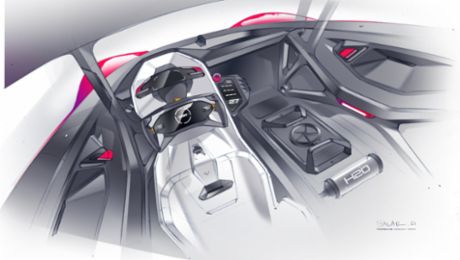 A look at the interior of the Mission R. 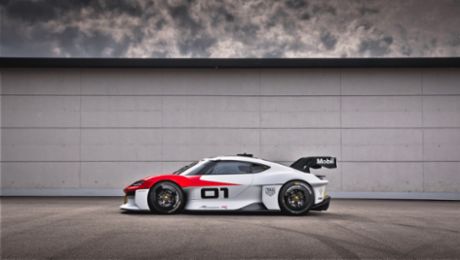