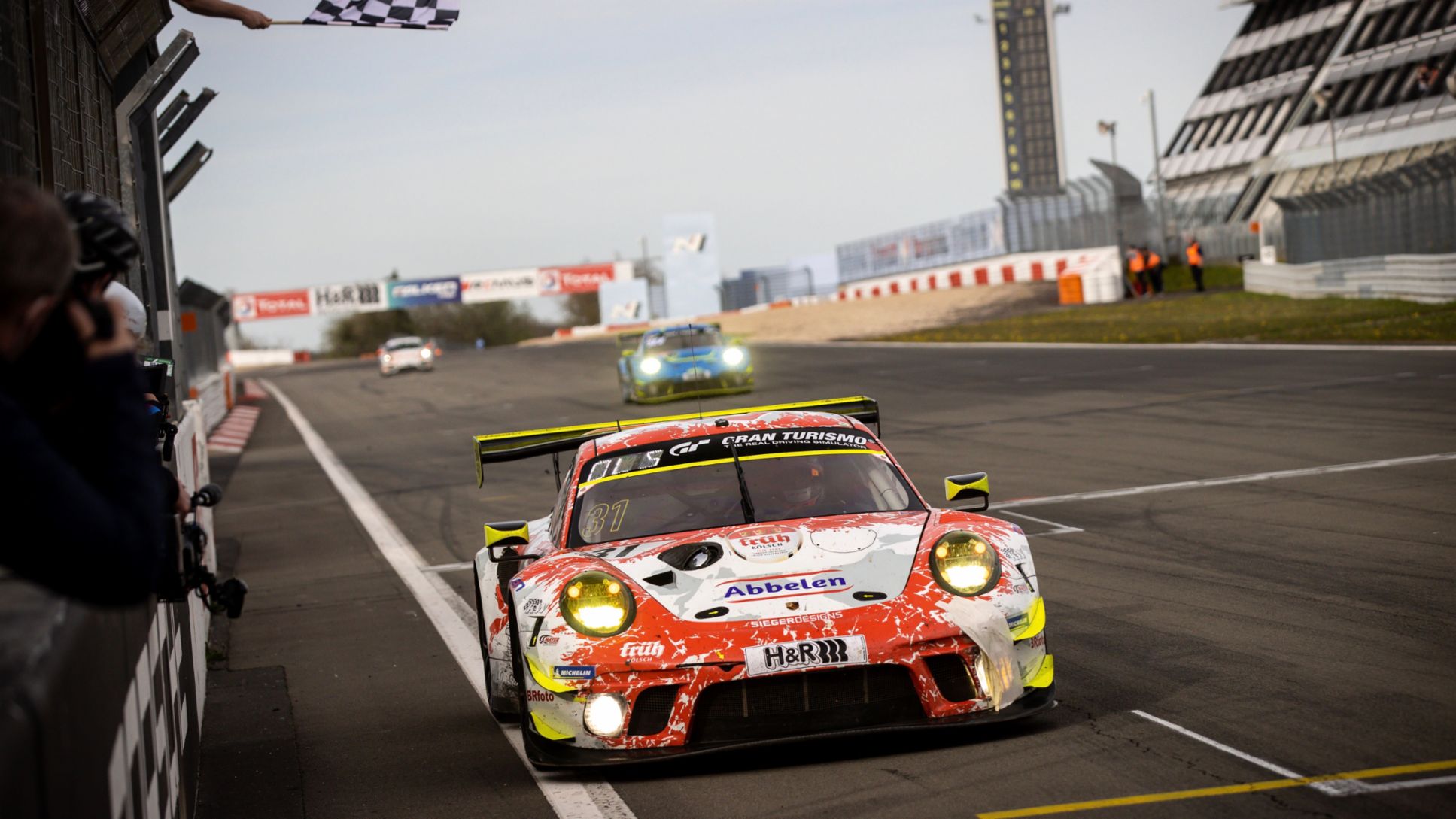 A clear success for Porsche after a gripping endurance thriller in the Eifel: The customer team Frikadelli Racing has won the six-hour qualifying race at the Nürburgring.

The 911 GT3 R of Dennis Olsen (Norway), Maxime Martin (Belgium) and Patrick Pilet as well as the works driver Fredéric Makowiecki (both France) crossed the finish line as the winners after 41 laps. Second place went to the No. 30 sister car driven by works drivers Matt Campbell (Australia) and Mathieu Jaminet (France) as well as Nick Tandy (England) and Earl Bamber (New Zealand). A post-race penalty relegated the identical racing vehicle fielded by Manthey-Racing from second to fifth place. For Porsche, this is the first victory at the final rehearsal for the 24-hour season highlight.

The prologue offers the only chance to test on the 25.378-kilometre combination of the Grand Prix circuit and the Nordschleife before the 24-hour highlight at the Nürburgring. The teams had eleven hours of track time over the entire circuit, plus two additional hours on the Formula 1 circuit as well as the Top 30 qualifying.

At this individual shootout for the 30 top-placed drivers selected from the cumulated first and second timed practice, the customer teams were able to demonstrate the potential of the 911 GT3 R. Porsche Young Professional Julien Andlauer (France) used the individual sessions over one lap to plant the Rutronik Racing car on the front grid row as the second fastest. With Matteo Cairoli (Italy) driving the Manthey-Racing’s “Grello” and Makowiecki at the wheel of the No. 31 Frikadelli Racing car, two more 911 racers rounded off the top five.

Porsche works driver Romain Dumas took over the start for Rutronik, however, the Frenchman was shunted into a spin by a competitor while on the Grand Prix circuit and lost a lot of ground. As a result, his compatriot Makowiecki inherited second. On lap 12, the 911 GT3 R took the lead for the first time. After handing the car over to Patrick Pilet, the No. 31 came under intense pressure from Frank Stippler’s Audi. A misunderstanding, however, while lapping a slower car cost the pursuer valuable time and gave Pilet a lead of over 20 seconds by halftime. Maxime Martin then took the wheel at the beginning of the fourth hour and extended the advantage.

A differently timed pit stop combined with caution phases saw Manthey-Racing’s number 911 car back at the top after 30 laps. Thanks to steady lap times, the final driver Matteo Cairoli grabbed the chance to eke out a gap over his pursuers. With 30 minutes of racing left, a later refuelling stop by Olsen reversed the order. Failure to observe a yellow flag earned the Manthey-Racing trio Olsen, Cairoli and Lars Kern (Germany) a penalty of more than a minute, which relegated them to fifth place. Position two subsequently went to the second Frikadelli Racing car. The top result for Porsche was rounded off by Falken Motorsports’ No. 44 nine-eleven finishing sixth and KCMG in tenth. A total of eight 911 GT3 R had taken up the race on the Nordschleife.

This year’s 24-hour classic on the Nürburgring will be contested on 5 and 6 June. The race action begins on Thursday, June 3, with the first qualifying.

Sebastian Golz (Project Manager Porsche 911 GT3 R): “Our teams did an extremely good job, and the qualifying race procedures were great. We made virtually no mistakes, and with one small exception, the pit stop times were satisfactory. Unfortunately, the penalty handed to the Manthey-Racing cost them their second place – but it’s better that such things happen during the preparation than at the 24-hour season highlight at the Nürburgring. In terms of performance, things look positive for us. Finishing in first and second is great, even if the competition put us under a lot of pressure, especially during the second half of the race. There’s not a lot of homework to do now, we’re feeling well prepared.”

Fred Makowiecki (Porsche 911 GT3 R #31): “That was another great result for the team and excellent preparation for the 24-hour race. But now we have a lot of analysing to do because this was the first time we could try all tyre compounds in warm conditions. We also have to keep an eye on our rivals because they came very close – and that promises an interesting fight.”

Mathieu Jaminet (Porsche 911 GT3 R #30): “Like last weekend in the Nürburgring Endurance Series, we achieved a one-two result, only this time in reverse order and with victory going to the number 31 car. That was a mega performance from the team and very good preparation for the 24-hour race next month. I’m happy. We took up the race from 13th on the grid, managed to fight our way up to third place and now we’re even second.”

Lars Kern (Porsche 911 GT3 R #911): “That wasn’t an easy weekend for us, so we would’ve been happy with second place. We kept changing the setup between stints, drove on different tyre compounds and tried everything to achieve a good result here. Fifth is a shame, obviously, and doesn’t reflect our pace. But I too have made such a mistake – overtaking under yellow – in the past. I think we’re well sorted for the 24-hour race.”

At the Nürburgring 24-hour race, the famous Caracciola-Karussell throws a special challenge at man and machine. 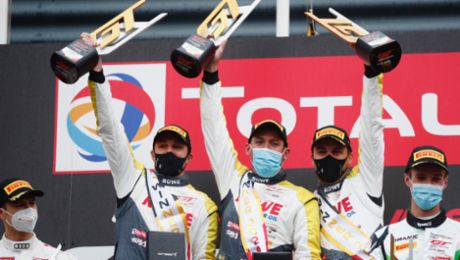 The Porsche customer team Rowe Racing has won the 24 Hours of Spa-Francorchamps. 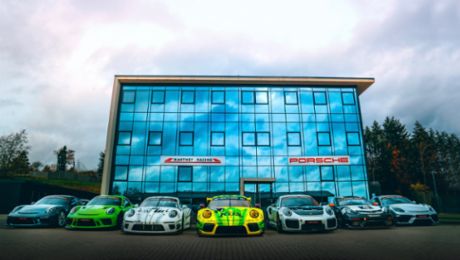