It is a Porsche tradition that a GTS always sounds special and the Acoustics Department in Weissach has composed a sound with a strong character for the new Porsche Cayenne GTS Coupé. The sound issues from an optional twin-branch sports exhaust system featuring centrally located tailpipes.

Many things can be wonderfully described in pictures, not least the traditions and audacity of a sports car manufacturer. Expressing a strong identity as a sound and then putting this into words proves rather more difficult. The new Porsche Cayenne GTS Coupé (Fuel consumption combined 11.4 – 11.2 l/100 km; CO2 emissions 260 – 256 g/km combined (as of 08/2020)) sounds sporty; everyone involved in its development is sure of that. Markus Sitzler, Team Lead Vehicle Periphery SUV-Engines, describes the sound of the newly developed sports exhaust system featuring central tailpipes as follows: “The sonorousness you would expect from a V8, flavoured with a dash of GT racing.”

“The Cayenne GTS Coupé doesn’t sound like a muscle man, it sounds more like a fit athlete.” Markus Sitzler

Rico Löscher, Specialist for Complete Vehicle - Product Line SUV, joins in, adding that, for him, it makes him think of racing cars: “The sound reminds me of high-revving naturally aspirated engines.” Sitzler attempts to paint a vivid picture of the sound composed by Porsche. We listen to his words and at the same time the new soundtrack of the Cayenne GTS coupé. Voluminous. Sporty. Self-assured. “It doesn’t sound like a muscle man, it sounds more like a fit athlete.”

Developed in house, with a sonorous burbling

The sports exhaust system and its two centrally positioned oval tailpipes was the brainchild of Jörg Winkel, Head of Acoustics, who is now enjoying retirement, having handed over the reins to his successor Stefan Hader at the start of 2018. Sitzler explains that, at the time, there was a brief for a concept idea, and the team around Winkel started working on it about four years ago. “Like all exhaust systems from Porsche, the sound of the in-house development is 100 per cent genuine”, he says. “Highly emotive with sonorous burbling on the overrun.” Just as impressive for Sitzler: “The simplicity of the pipe layout as well as the material and weight saving – this is an approach we will definitely keep pursuing.”

The difference compared with the previous sports exhaust system with the tailpipes located at the outer edges is its even throatier sound, which is due to the special internal structure of the silencer, providing a vivid acoustic underpinning to the sporty appearance of the 4.0-litre eight-cylinder engine.

The challenge for the team led by Sitzler, and component manager Tim Graf, was as obvious as it was complex: the sportiness should be unapologetically heard on starting the engine, under heavy load and at higher engine speeds. However, it also had to be possible to experience the volume of the V8 biturbo acoustically at low engine speeds and there are also country-specific requirements on noise emissions. “The already powerful eight-cylinder sound should therefore become more intense depending on the engine speed, real and emphatic, but not too loud. So as not to get any unwanted damping, we separated the exhaust tracts from the two cylinder banks, over the centre silencer through to the rear silencer and the outlets to the open air.”

Sitzler runs both hands along the main left and right tracts. Arriving at the bypasses, he explains the difference between an open and closed exhaust flap: “When the exhaust flap is closed, at low revs, the exhaust gas flow follows the bypass. In essence, it travels along an additional loop through a chamber of the main silencer with a perforated inner bottom before it returns to the main tract and is then discharged to the outside”.

The GTS sound is therefore quieter than under full load, but the bass tones are still rich. The sound intensity is dependent on the switching status of the flaps, which are continuously controlled via engine speed and load maps. The new sports exhaust system’s sound varies depending on what percentage of the exhaust gas flow passes through the main tract, bypass and silencer. The special design of the twin-branch, central sports exhaust system means that it reveals even more of its sporty sound than the standard system with its tailpipes arranged at the outer edges, especially at high engine speeds. In the passenger compartment, the engineers deliberately reduced the amount of insulation material, mainly in the rear of the car, which makes the sound experience more intense for the passengers and enhances the GTS driving experience, with no compromise of comfort.

Since the return of the V8 engine (Cayenne GTS models: fuel consumption combined 11.4 – 11.2 l/100 km; CO2 emissions combined 260 – 256 g/km (as of 08/2020)) to the new Cayenne GTS models they now boast 620 Nm of torque, which is 20 Nm more than their predecessors. As expected of a Cayenne, power transmission is performed by the eight-speed automatic Tiptronic S transmission. In the 4.0-litre V8 biturbo engine, the exhaust gas turbochargers are arranged space-savingly inside the cylinder V, which enables them to be installed lower in the vehicle. Speaking of low, the body is 20 mm lower as standard thanks to model-specific steel springs.

Porsche Torque Vectoring Plus, which is installed as standard, ensures the best traction and a dynamic steering response when accelerating out of bends. With the Sport Chrono package fitted as standard to the GTS Coupé, the new Cayenne sprints from 0-100 km/h in 4.5 seconds, 0.6 seconds faster than its predecessor. After its debut in the Cayenne GTS Coupé, the centre sports exhaust system will also be available later on the Cayenne Turbo Coupé and the Cayenne Turbo S E-Hybrid Coupé, always in conjunction with the optional lightweight sports package on all models.

Returning once more to the story, we are sitting in a Cayenne GTS Coupé. This is a Porsche with a sound redolent of a fit athlete rather than a muscle man pumping iron, a sports car with up to five seats which carries its passengers nimbly upwards through steep winding roads with almost unimaginable ease. It has a bigger engine with more cylinders than before and we celebrate the return of the V8 to the Cayenne GTS, not to mention the Porsche orchestra, which has given the car the sound it deserves: a composition of powerful V8 sports car sound blended with memories of the rack track. 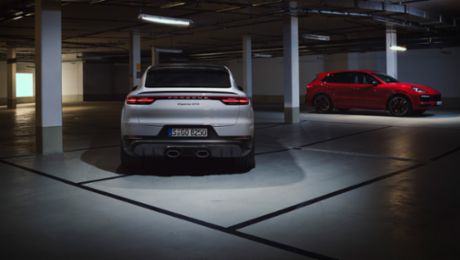 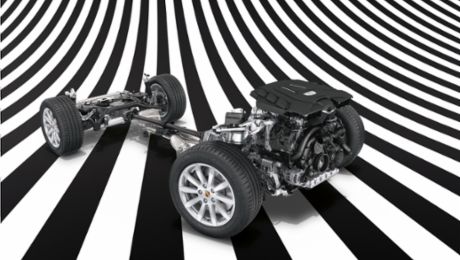