She positions herself behind the baseline, legs shoulder width apart. She sets her sights, total concentration is required. Her right hand guides the racket forwards and her left hand the ball which touches the frame just above the throat. The movement stalls for a fleeting moment – and then everything goes quickly. Julia Görges winds up. She goes through her service action automatically. It is a motion she has practised thousands of times – toss the ball up, bend the knees, drop the racket behind the head, catapult the body upwards and then finally hit the ball fully-stretched at the highest point. A big hit – fast, accurate and unreturnable for the opponent.

Görges, 1.80 metres tall, is considered one of the best servers on the WTA Tour. “The serve is one of my biggest weapons,” she says. The number of aces is generally recognised as being a service specialist indicator. It is so beautifully simple and obvious to rank somebody that sends down lots of aces as a top server. Somebody like Julia Görges, who in the past decade – therefore between 2010 and 2019 – hit the third most service winners by delivering 2,695 aces on the WTA Tour. She was only topped by Serena Williams (3,133) and Karolina Pliskova (3,065). When talking about her serve, the Porsche Brand Ambassador however quickly makes it clear that aces are above all “a nice statistical plaything for fans and the media”. Görges makes it clear that, “It’s naturally nice being able to depend on one’s serve and the many free points. However, for me it’s basically about mixing up my serve, hitting it at different speeds and with different types of spin and directions. You don’t get much out of having served the most aces at the end of the season.”

However, there are moments in a match when the German goes all out to hit an ace. “It’s something I decide on the spur of the moment – and then all hell breaks loose,” she jokes. She explains why she has a good serve by saying: “I’ve got good leverage, a quick arm and a loose wrist. It means I change the direction of my serve at the last instant. I think this element of surprise is pretty seldom on the women’s tour.

The serve has a special place in tennis as it is the only shot you hit without being influenced by the opponent, something Görges is fully aware of and she duly practises her strength systematically. “I think I can serve even better, even though the air at the top is thin,” she says. Dull and boring service practise is a horror for many tennis players. Too monotonous, too superfluous. As a junior, she did not focus on practicing her serve. She wanted to play and not mindlessly hit ten serves through the middle of the right service box.

“I think I can serve even better, even though the air at the top is thin.” Julia Görges

She only really started honing her service strength in the transition from the juniors to the seniors. As a pro, Görges now explicitly incorporates service units into her practise sessions. “Sometimes, I just hit serves for an hour,” she explains. However, she then needs a lot of variety – she is no fan of mindlessly aiming for target areas. She needs creative drills whereby her feel on the serve is also schooled. “I don’t want to serve like a robot and want keep my own style,” stresses the northern German who now lives in the south of the country.

Her delivery includes an unconventional technical detail. When winding up for the serve by swinging her racket upwards, she lets the racket head drop with a closed wrist. In an analysis, Barbara Rittner once called it “a remarkable racket position”, Görges herself speaks of a “strange twirl” that’s simply a part of me”. She has never considered changing her technique and none of her coaches have ever contemplated getting rid of it either. “It doesn’t really matter what happens before the strike,” maintains the German No. 2 – exactly the extremely good thing about her serve as she generally strikes the ball at the highest possible point a good way in front of the body. It can have disastrous consequences for her opponents. The Porsche Team Germany player is hard to stop when her serve is firing on all cylinders.

But even for the 31-year old, a strong serving performance is no guarantee for winning. When sending down 21 aces at the 2019 US Open in the last 16 against Donna Vekic, she still lost the match 6-7, 7-5, 6-3. She served for the match and then, of all times, produced two double faults. Looking back on the encounter, she says, “I didn’t lose the match because of the two double faults. It was simply a tight match. Many people viewing the aces statistics will say that I should never ever lose such a match, but it isn’t that simple.”

Julia Görges enjoyed the best season of her career in 2018 – two tournament wins, Wimbledon semi-final, a career high No. 9 in the WTA world rankings. Her serve is naturally an indication of the quality of her game. She struck 492 aces in 68 matches, a WTA record for a single season. Her average of 7.2 aces per match in 2018 was a career best. She won just over 74 per cent of her first service points and only Serena Williams was better in the year. Generally, the correlation is quite simple, if the serve is working, then the rest of the game is also on song. “It’s the same way with me, but not always,” admits Görges.

“It’s so nice to see that you can do good with your serves.” Julia Görges

One thing becomes obvious after half an hour of intensive discussions about her serve, Görges doesn’t like being reduced to just her aces. If one is to become a complete server like herself, a lot more is needed than manufacturing aces as if on a production line. She does however make one exception, namely when her aces serve a good cause. At the start of the year in Australia, Görges immediately joined Nick Kyrgios’ scheme to support the volunteers in the battle against the terrible bushfires to the tune of 200 Australian dollars per ace.

At the Porsche Tennis Grand Prix, “Jule” is more than happy to help out with an ace or two for the traditional “Aces for Charity” campaign. During the tournament week, Porsche donates 100 euro to good causes for every ace struck by the players. Last year, the sum totalled 30,000 euro after being rounded up. “It’s so nice to see that you can do good with your serves,” she says.

The charity campaign is now also being used as a part of the German Tennis Association’s innovative “German Ladies’ Series presented by Porsche”. For every ace hit in the 120 matches, Porsche will donate 50 euro. The sum, like at the Porsche Tennis Grand Prix, will go to the “Stiftung Agapedia” foundation that supports needy children as well as the “Landessportverband Baden-Württemberg e. V.” sports association for the national “Integration through Sport” programme. 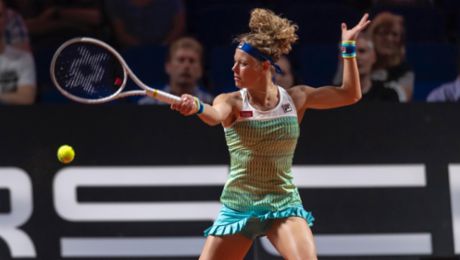 Women’s tennis will take a first step back to normality with the “German Ladies’ Series presented by Porsche”.