If in doubt, flat out

Even the slightest changes can make the difference between victory and defeat: Porsche motorsport ace Jörg Bergmeister and his friend, mountain bike professional Karl Platt, teach our editor a lesson on how to win the toughest races in the world. And how to distinguish professionals from amateurs.

He had literally just got out of the car after finishing the free practice sessions, night qualifying and then the full rigours of the 24-hour race at the Nürburgring. But instead of putting his legs up and regenerating, Jörg Bergmeister is with his friend Karl Platt, flying through the Palatinate Forest on their mountain bikes at a pace I don’t even have a chance to follow – even on an E-bike.

At lunch I realise why. Because while I consider the eagerly awaited vanilla ice cream an appropriate ration after the work I have done, an espresso is enough for Bergmeister. Appetites won’t remain the only difference between amateur and professional on this day.

"You have to feel the passion in you to become a professional." Jörg Bergmeister

Sure, you can make great progress through technique and training: both Platt and Bergmeister agree on that. There must also be talent, but above all there must be passion. Only if you are 100 per cent committed, through body and soul, and prepared to give it your all can you succeed.

Racing, both in cars and on mountain bikes, is more than a job or a profession for this pair – it is their vocation.

It is also the one cause the two put everything else aside for. When it comes to the crucial phase of preparing for a big race, there is very little else besides their sport. Around the clock their heads are on the job, restlessly searching for the last improvement, the last optimisation, the last gain on the stop watch.

"If I haven't been in the saddle for a few days, something is missing." Karl Platt

This mental tunnel, this full concentration on one thing – that is the decisive difference between amateur and professional. While you or I may not care about a tiny detail, they spend nights, perhaps even weeks, working on changing and improving even the smallest of things. Giving more than 100 per cent in every situation, always pushing the limits and sometimes going even further beyond them, is the key to success. Both could not agree more on this.

Surprisingly, however, their opinions differ if it comes to the beginnings of their careers, particularly in their strategies and techniques. While Bergmeister accompanied his father racing on the world's race tracks as a young boy, and came into contact with the sport at a correspondingly early age, things were different with Karl Platt.

The mountain bike he bought as a teenager was more fun than a sports object and tricks and jumps were practised. The steeper, further and higher the better, to the point of breaking the frame. Over time it became clear that he had a very special talent, which he first demonstrated on the road and then off-road. But his mentality remained the same: the steeper, further and higher the better. When older team colleagues tried to explain to him that experience wins races, he could only shake his head. He was convinced: legs win races, nothing else.

"You always have to be one step ahead in your head." Jörg Bergmeister

Today, however, he sees things differently. He rides the races in a more controlled manner and lets the situation develop. He reads his opponent, adapts his strategy constantly to what is happening and, if necessary, improvises once he has looked his competition deep in the eye and can read a new scenario.

Bergmeister is denied such opportunities in modern motor sports. Generally speaking, the outcome of the race in this well-oiled team performance of mechanics, engineers and drivers is far less dependent on him than in a race on a mountain bike, he admits with a grin. After all, his legs have never won a race in motorsport. It's much more the team’s performance, the strategy and not least the experience. While sitting in the car, you always have to be mentally around the next bend, at the next pit stop and ready for when the weather changes.

Jörg Bergmeister and Karl Platt in the Palatinate Forest

"The Nordschleife is the best example. With over 20 kilometres of track, it can happen that it rains cats and dogs on one part and the sun shines on the other. A wrong decision in tyre choice can ruin the whole race in a situation like this". Jörg Bergmeister

It sounds like driving a car at the absolute limit and playing chess simultaneously. But maybe it's exactly these things that the amateur simply can't imagine. Nor can the layman fully appreciate what technical development means to the professional.

"When I sit on my bike of the 2016 Cape Epic today, I can hardly believe how I could win with it." Karl Platt

The basic principles have not changed, but it is the improvements of many nuances that ultimately make the big difference. A new coating on the fork, a millimetre more reach and half a degree more steering angle make the mountain bike a completely different machine to ride. Even an old chain can be felt by the professional biker after the first hundred metres.

Even Bergmeister, as a senior automotive development driver, can only marvel at this. He has learned so much about mountain bikes today on the outing and during our interviews, he says with a laugh. And he understands how important the constant improvement and further development of all components is. When a new product comes out that is so much better, faster and more powerful than its predecessor, it is sometimes hard to believe such improvements were possible.

"You improve subtleties and can hardly believe the effect on the final result.“ Jörg Bergmeister

The best example of this are their two Porsche 911 GT3 cars. The silver one belonging to Platt from the first generation of the 997 and next to it the black Weissach edition of the 991.2 GT3 RS – Bergmeister's current company car. Only 13 years separate the two 911 and yet three development generations lie between them. But you can feel that immediately. Platt is amazed after the drive.

„You think that there's no better way to go when it comes to precision, feedback and dynamics, and then the new GT3 RS suddenly enters a completely different dimension. It is really impressive.“ Karl Platt

It is surprising how finely Platt talks about his driving experience with the two Porsche: the response of the chassis, the pressure point of the brakes, the movement of the whole car after the steering impulse, or simply the responsiveness to throttle inputs. It is clear that he spends a lot of time on the race track with his car. He is concerned about line selection, accelerator pedal positions and steering angle – things he wants to constantly improve. In short: you can tell he is a professional.

Bergmeister catches himself in the process of constant optimisation, too. Although he has so far only used mountain biking to help relax after a race, or for fitness, it is developing into a real passion. Soon he is playing with air pressure and damper tuning, learning to read the trail and refining his own trail technique. Because there is always something to optimise when faster is always better. And after all: if in doubt, flat out.

In his development role in the road testing of the 911 series, Bergmeister pays particular attention to the fact that there is always a bicycle holder for the roof transport system at the launch of a new model. After all, this is how he serves two of his passions at once. 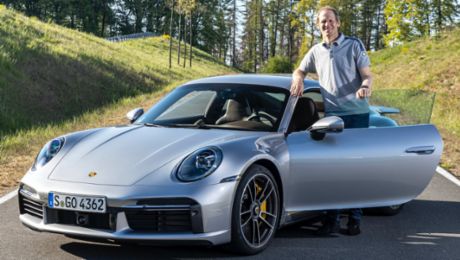 The 911 is constantly evolving and is never losing his charm. For Porsche brand ambassador and test development driver Jörg Bergmeister the fascination sportscar is still alive.

Fuel consumption / Emissions
Fuel consumption combined 11.1 l/100 km
CO2 emissions combined 254 g/km
Porsche uses cookies to optimise and improve the website, as well as enable the availability of certain functions. By continuing to use this website, you agree to our use of cookies. For further information, please click  here