The invention of a whole new type of car: The Targa was the reaction of Porsche to a discussion held in the early 1960s on the importance of the US market.

From Detroit to Dallas, open-top cars were suddenly considered dangerous as they were said to provide insufficient protection for occupants in an accident. Dark clouds were brewing over the future of the convertible.

This development was naturally not well-received in Stuttgart-Zuffenhausen as most of the 356s shipped overseas had a fabric roof. The Swabians did not want to lose their customers in the sunshine states of the USA as the sales department was vehemently insisting on an open-top variant. Something new was therefore required: a smart solution in keeping with the company’s style that would overcome the apparent contradictions of being visually attractive but functional in form.

Once again, motor sport provided the inspiration. It had long been common practice among racing customers to fit open-top sports cars with a roll-over bar - the battle for seconds and positions can also end in a double somersault. However, the designs that were developed for the track did not look particularly attractive. Furthermore, the designer of the 911, Ferdinand Alexander (“Butzi”) Porsche, was not even particularly enthusiastic about a cabriolet version of his design-of-the-century fastback – so a clumsy tubular frame was out of the question. However, it was thought that the bar could perhaps be given an attractive shape and made from stainless steel to give a sporty yet elegant look with plenty of charisma. The basic idea for the “safety cabriolet” was born.

When the curtain was raised on the great new hope at the International Motor Show in Frankfurt in September 1965, it had already had been named. Just as the iconic Carrera name referenced Porsche’s early success at the famous Carrera Panamericana in Mexico, the name of the new roll hoop-equipped 911 was also intended to evoke motor sport connotations. Le Mans or Monza were the obvious choices, but both were already taken.

The Swabians had just won a renowned endurance race on Sicily for the fourth time in five years, the Targa Florio. For a short time Targa Flori was discussed as a possibility but Harald Wagner, the domestic sales manager, was concerned it might be shortened to just Flori and decided the matter by asking the question: “Why don't we just say ‘Targa’?” A generic name for vehicles with a removable centre roof section was born.

One of the world’s most spectacular race circuits: the Targa

The Targa Florio was a motor race on public mountain roads through the Madonie Mountains of Sicily. From 1906 to 1977, racing cars with up to 600 PS thundered round hairpin bends and through picturesque mountain villages. Since 1978 it has continued as a rally. The original circuit, conceived by Vincenzo Florio (see below), initially led from Cefalù through Cerda, Caltavuturo, Castellana, Petralia, Geraci and Castelbuono.

But with Big Circuit, Medium Circuit, Small Circuit and Sicilian Lap, alternative routes established themselves over the years. The Big Circuit, for example, was 148 kilometres long and, with an altitude difference of over 1,000 metres, a special challenge for man and machine.

Between 1956 and 1973, Porsche won the Targa Florio 11 times. The road race brought Porsche its first victory in a Manufacturers’ World Championship event when, in 1956, Umberto Maglioli won the 1,000 kilometre race driving a Porsche 550 A Spyder in scorching heat, just eleven days after the model’s racing debut at the Nürburgring. More about the history of Porsche at the Targa Florio here (in German).

The prize as the source of the name: Targa means shield

The Florio family achieved enormous wealth with Marsala wine, chemicals, tuna processing and shipping. The founder’s grandson Vincenzo (1888 - 1958) had to leave the management of the company to his brother Ignazio. As consolation, the latter gave him the first car in Sicily but, in a comparison, a horse proved to be faster. From 1906, Vincenzo organised a race in the mountainous hinterland of Palermo to encourage the state to build roads and petrol stations. As a prize he donated a silver shield (Italian: "Targa“). 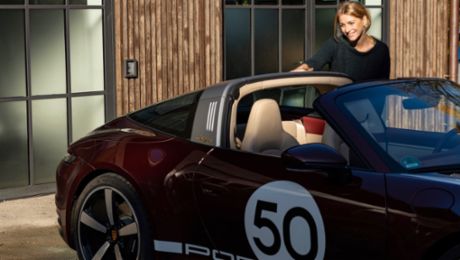 Fuel consumption / Emissions
Fuel consumption combined 9.8 l/100 km
CO2 emissions combined 223 g/km
Porsche uses cookies to optimise and improve the website, as well as enable the availability of certain functions. By continuing to use this website, you agree to our use of cookies. For further information, please click  here