Porsche continues its affiliation with the Nürburgring Endurance Series (NLS) for another three years. The sports car manufacturer and the events and marketing company VLN VV GmbH & Co. KG have extended their cooperation until the end of 2022.

All rounds of the NLS will be contested on the Nürburgring-Nordschleife. Porsche has been committed to the world’s largest grassroots racing series on the storied racetrack for many years. The opening round of the 2020 NLS takes place this Saturday. Moreover, the sports car manufacturer supports the new Digital Nürburgring Endurance Series this year.

“Endurance races are part of the Porsche DNA.“ Michael Dreiser

“Endurance races are part of the Porsche DNA and we have a very special connection to the exceptional Nürburgring-Nordschleife,” emphasises Michael Dreiser, Head of Sales at Porsche Motorsport. “The particular appeal of the Nürburgring Endurance Series comes from the well-balanced coexistence of elite and club sport racing. This competition on the world’s most demanding racetrack poses a fascinating challenge that our customer teams relish. They race in different classes, and the battle for top positions is truly gripping among the many privateers and youngsters who put their trust in Porsche. In the NLS, we are able to clearly demonstrate the potential and performance of our racing cars.”

In the NLS – known as the Nürburgring Long-Distance Championship prior to the 2020 season – Porsche is the most successful manufacturer with 217 overall wins and 714 group victories (as of end 2019). Traditionally, a wide variety of models from the sports car manufacturer are fielded, ranging from the 718 Cayman S in the near-standard Division V to the 718 Cayman GT4 Clubsport and the 911 GT3 Cup through to the Porsche 911 GT3 R, which fights for overall victory in the top GT3 category SP9. In many cases, Porsche supports customer teams with engineers, advice and provides works drivers.

Parallel to this, Porsche also supports the Cup 2 NLS class, a division reserved for the 911 GT3 Cup. The “Green Hell” offers another attractive playing field for the racing model over and above the Porsche Mobil 1 Supercup, many national Carrera Cups, other one-make cup formats, the Porsche Sports Cups and many other circuit championships around the world.

2020 marks the fifth Nürburgring-Nordschleife season for the Cayman GT4 Trophy by Manthey-Racing. Given the fierce battles for positions among more than a dozen competitors with the latest 718 Cayman GT4 Clubsport and the previous Cayman GT4 Clubsport model, the Cup 3 class is particularly popular with spectators. This year’s regulations include an overall team ranking as well as an amateur driver classification. The latter category is for newcomers who, among other things, must turn laps within a specified time.

Porsche supports the digital NLS in 2020

The Nürburgring Endurance Series was postponed at the start of the season due to the coronavirus crisis. The first real race will be contested this Saturday. The NLS has bridged the race-free time since March with a virtual Nordschleife series, which continues until November. In the digital version, which Porsche supports as well, 60 sim racers and racing drivers go head-to-head in four classes, which – like in the real competition – include the Cup 2 for the 911 GT3 Cup and the GT4 class, where the Cayman GT4 Trophy by Manthey-Racing competes. Other competitors contest the TCR-category SP3T and the top GT3 class SP9.

“Esports has been an integral part of Porsche motorsport since last year,” outlines Marco Ujhasi, Manager Esports at Porsche Motorsport. “The Digital Nürburgring Endurance Series has rapidly turned into a popular online platform and has attracted a unique community of sim racers and motorsport fans. Like in real-life motorsport series, the virtual version focuses on club sport racing. For this reason, we’re particularly pleased to expand our cooperation in this field.”

Stories beyond the asphalt: The Nürburgring is their life

Revered, feared: the Nürburgring. It has been a characteristic feature of the Eifel and its people for over 90 years. 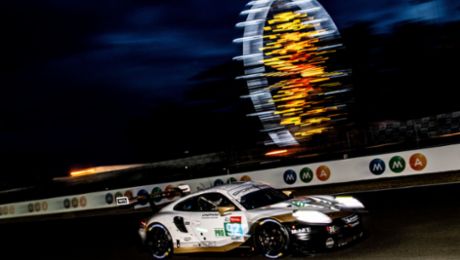 Porsche Motorsport and its customer teams faced an extraordinary challenge during the 2019 season.