The TAG Heuer Porsche Formula E Team has achieved another top-ten finish in Marrakesh. In the fifth race of the 2019/2020 ABB FIA Formula E Championship, Porsche works driver André Lotterer crossed the finish line in eighth place. He had started the race from third position.

In the second Porsche 99X Electric, Neel Jani (CH) took the chequered flag at the Marrakesh E-Prix in 18th place.

Lotterer (DE) dropped back to fourth on the opening lap, before returning to third in the opening phase thanks to a penalty imposed on the driver ahead of him. He fell back a further two places as the race progressed, before briefly battling up to fourth. Then, however, Lotterer slipped back to eighth position in the closing minutes. Jani experienced a largely uneventful race and improved somewhat from 23rd on the grid.

For the second time since his pole position in Mexico two weeks ago, Lotterer made it to the Super Pole in qualifying for the TAG Heuer Porsche Formula E Team. In the competition for the six fastest drivers, he posted a time of 1:17.253 minutes to secure third place.

After five out of 13 races, Lotterer now has 25 points and is twelfth in the drivers’ standings for the ABB FIA Formula E Championship. The TAG Heuer Porsche Formula E Team is ninth in the team championship, with the same number of points.

Reactions to the Marrakesh E-Prix

Amiel Lindesay (Head of Operations Formula E): “Our car was once again very strong in qualifying and the first half of the race went well too. Towards the end of the race, we had saved less energy than the cars around us which is why André (Lotterer) lost ground during the final two laps. We will take another look at that and analyse it carefully. Our aim for the future is to convert the strong qualifying performance into consistently good race results.”

André Lotterer (Porsche 99X Electric, #36): “Of course, we're happy to score these points in Marrakesh. Having started from third, we’d have liked to have finished better, but the second half of the race was not easy. Nonetheless, we were still able to learn a lot. We will draw the right conclusions from our experiences today.”

Neel Jani (Porsche 99X Electric, #18): “During the previous races, our pace was good but we were unable to record the results we had aimed for. This time, it was difficult for me from the start. I did not feel right on the brakes at all during the day. We will examine that in detail. We still have plenty of races ahead of us. We will continue to work intensively and improve.”

After the eventful Mexico City E-Prix with its highs and lows, the TAG Heuer Porsche Formula E Team will be chasing points once again in the 2019/2020 ABB FIA Formula E Championship in Morocco. Porsche’s first pole position in fully-electric motorsport at the last E-Prix sees the team optimistic as it heads to the Marrakesh E-Prix.

The two Porsche works drivers Frédéric Makowiecki (FR) and Thomas Preining (AT) will take part in the official rookie test for the TAG Heuer Porsche Formula E Team the day after the fifth race of the season, on 1st March 2020.

What can you say about the track in Morocco so far?

“The track is a mix of fluid passages with elongated turns and angular sections. Part of it is a permanent racetrack, which probably has more grip than other typical Formula E tracks, similar to the track in Mexico. The energy consumption there is pretty high, meaning that you need to drive efficiently and come up with a suitable race strategy.”

Will you bring home your first points at the Marrakesh E-Prix?

“The past three races have been rather difficult for us as a team. In Santiago de Chile and Mexico City in particular we had good chances of picking up points, but were unable to make use of them. I hope that Morocco will prove to be a race weekend where everything goes well for us and we cross the finish line in the points without any incidents or penalties.”

The pole position for Porsche in Mexico City was another highlight after your second place in Diriyah. What are your goals for the Marrakesh E-Prix?

“It is great that we were able to bring home a podium and a pole position in our first four Formula E races. The results prove that the Porsche 99X Electric is a competitive car. We are still learning and are positive that we will be able to affirm this performance at the Marrakesh E-Prix. The level of performance is likely to be very high due to the track layout, which is why it is particularly important that everything goes well in qualifying.”

What is the key to success?

“The track is a very special one because we will be driving very close to the old city walls. The track packs a real punch. It has a bit of everything – both slow and fast turns. I like the layout. The right car settings and good energy management are the key factors. It won’t be an easy race since there are a lot of overtaking opportunities on this track, which means we will have to be even more efficient with the amount of energy we have available.”

A podium and a pole position after four races -  are the results to date something to be pleased with?

“We can be very pleased with the second place and the pole position in our maiden season, which is still in its early days. After starting from the front row in Mexico City, expectations were high. We were aiming for the win. It is a real shame that damage to André’s car forced him to retire from the race. But despite that, we demonstrated the good performance of the Porsche 99X Electric once again, which fills the team and drivers with confidence for the Marrakesh E-Prix.”

Everything you need to know about the Marrakesh E-Prix

The ABB FIA Formula E Championship heads to Marrakesh for the fourth time. The day before the race (28 February) there will be a brief shakedown and a 45-minute free practice session. Then, on race day (29 February) the first order of the day will be the 30-minute second free practice session. In the subsequent qualifying session, there will be four groups, each made up of six drivers. The current driver standings will determine the groups. As tenth in the standings, André Lotterer will be in group 2, and Neel Jani in 23rd place will be in group 4. The drivers will each have six minutes to drive their personal best time. The fastest six drivers from all the groups will then qualify for the 20-minute Super Pole. This will decide who gets to take on the race from the first, second and third row of the grid. The race will last 45 minutes plus one lap.

The 2.971-km "Circuit International Automobile Moulay El Hassan" runs through the streets of Marrakesh and along the old city wall. With slow and fast sections, the track offers a mix of different turn variations. The track is partly a permanent racetrack, which means it has significantly fewer bumps than typical Formula E street circuits.

The Marrakesh E-Prix qualifying session and race will both be shown on Eurosport.

The initial images from Marrakesh will be available on Friday, 28 February 2020, after the shakedown. More information about the Marrakesh E-Prix will be published live via the TAG Heuer Porsche Formula E Team Twitter handle @PorscheFormulaE. There will be a detailed report after the race. 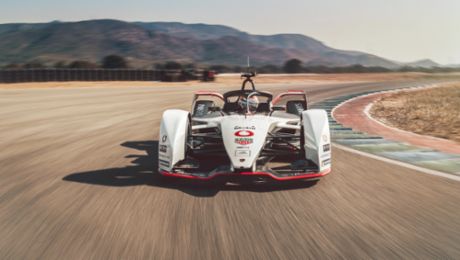 Porsche sending Makowiecki and Preining to the rookie test in Marrakesh

Frédéric Makowiecki and Thomas Preining will be on track in Morocco for the TAG Heuer Porsche Formula E Team. 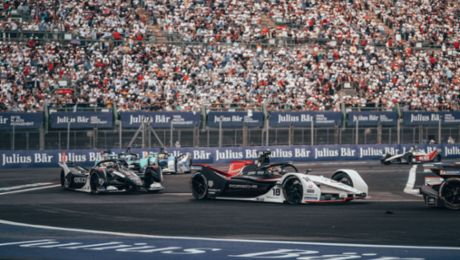 The TAG Heuer Porsche Formula E Team missed out on a podium finish in the Mexico City E-Prix. 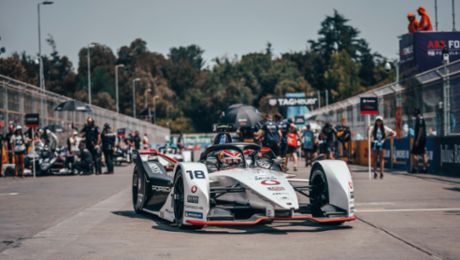 The Porsche Formula E Team was denied a further top result in the third race of the season in Chile. 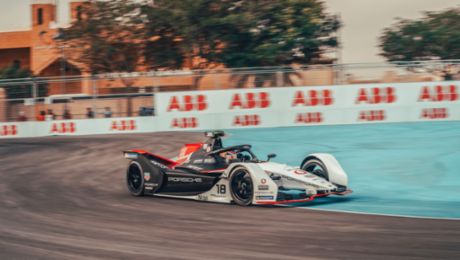