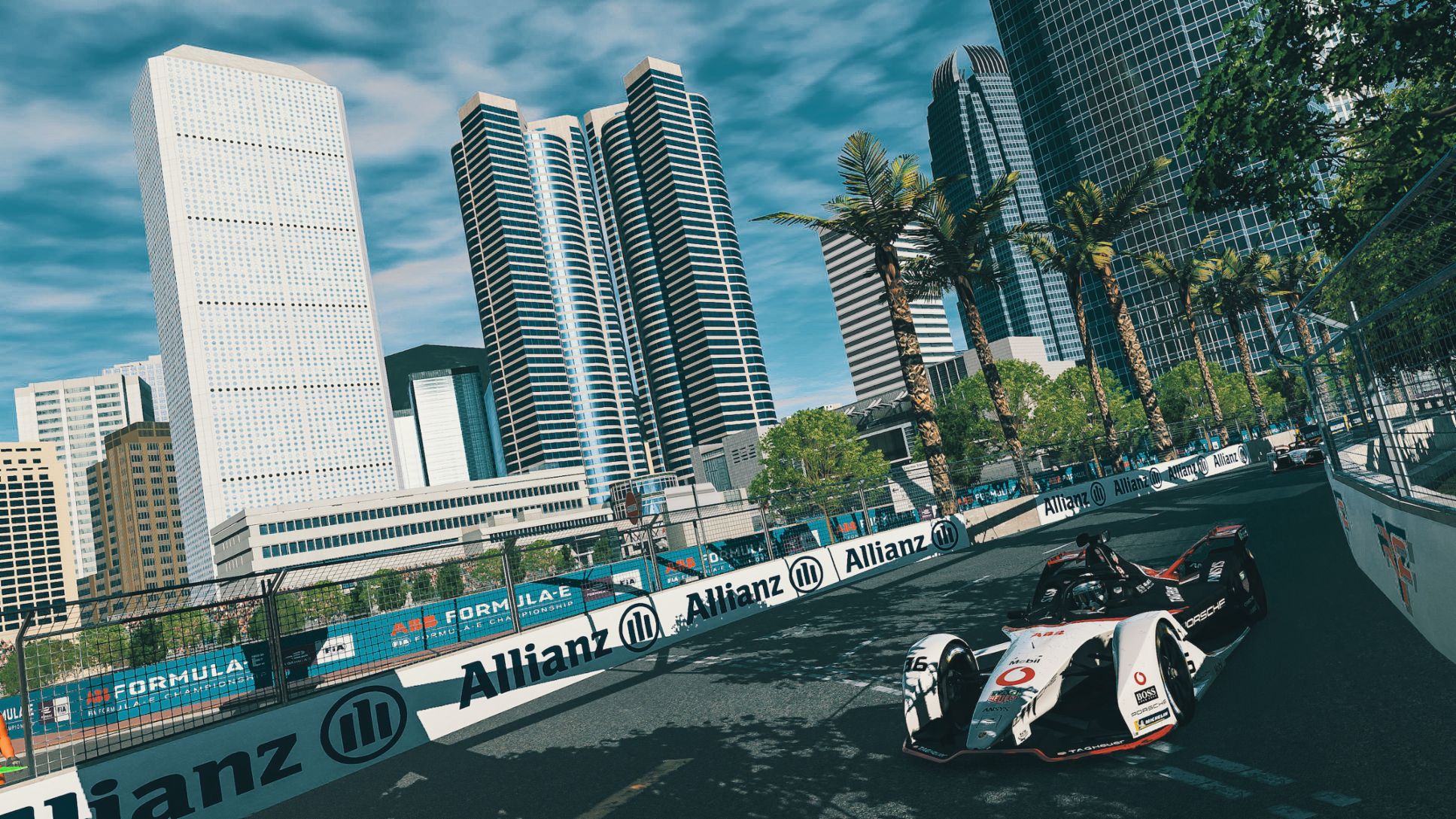 A mass pile-up caused chaos in the starting phase of the fourth race of the “ABB Formula E Race at Home Challenge” – and robbed the two TAG Heuer Porsche Formula E Team drivers of the chance to score points. André Lotterer and Neel Jani had to be content with 15th and 16th places on the virtual circuit in Hong Kong.

Joshua Rogers (AU) gave another strong performance at the wheel of the digital Porsche 99X Electric in the event for sim racers and influencers. The reigning Porsche TAG Heuer Esports Supercup champion had already secured pole position in qualifying. He then concluded his second race appearance of the season by crossing the line in second place.

After starting from tenth and 17th on the grid and chaotic scenes at turn one, some fine manoeuvres saw the two Porsche drivers improve by several places, only to find themselves propping up the field after a series of not-at-fault collisions. The two Porsche works drivers then performed at a good pace in their Porsche 99X Electric and displayed great fighting spirit as they both moved up eight positions. Lotterer finished 15th, with Jani just one place behind. Jani remains fifth in the drivers’ standings with 24 points, while Lotterer is 14th with six points.

Round 4 of the #RaceAtHome is in the books. 🏁

The digital Formula E circuit in Hong Kong once again proved to be a fruitful soil for Joshua Rogers. Three weeks after recording a maiden win in the event for sim racers and influencers on the same circuit, Rogers finished second to secure another spot on the podium. The Australian driver had missed the races on the last two weekends, but returned to secure pole position on a wet surface. In the race, Rogers made a series of defensive moves to hold his lead against challenger Lucas Müller (DE). He did, however, have to let the German driver overtake him on the penultimate lap. Rogers scored 20 points for his pole position and second place. He is now fifth in the drivers’ standings after competing in two out of four races. Marius Golombeck (DE), the second driver in a virtual Porsche 99X Electric, reached 15th place.

Quotes on the race:

Marco Ujhasi (Manager Esports at Porsche Motorsport): “It is no exaggeration to say that it was a tumultuous race. It was the first time that qualifying for the ‘Race at Home Challenge’ took place on a wet surface. That was a challenge for all the drivers. Neel and André started from midfield. Right at the start of the race, they were involved in some incidents on turn one that pushed them back down through the field. Josh Rogers did another great job on his second appearance in the event for sim racers. However, he made a small error after securing pole position and a very good starting phase. Nonetheless, second place is a very good result.”

Neel Jani (Porsche 99X Electric, #18): “Points were a possibility again today. Sadly, that didn't work out. Qualifying was difficult. Tenth place is alright in these conditions. The start did not go according to plan. However, someone hit me on the way out of turn one. Now I am concentrating on the race coming up next Saturday.”

André Lotterer (Porsche 99X Electric, #36): “Despite the difficult conditions, I had a good feeling in qualifying so I have to carefully examine where I lost some time. After the start, it was all chaotic on turn one. There wasn't much I could do and I fell back to last place. At least I could still drive the car. That meant I could battle back and improve by a few places.”

Until the grand finale on 7th June, virtual races will be held on a weekly basis, as a replacement for the standard races in the ABB FIA Formula E Championship 2019/2020, which have been postponed due to the current crisis. Each live broadcast gets underway at 16:30 CEST. The series sees all 24 drivers in the regular championship do battle for virtual points in racing simulators. The races are held on the realistic rFactor2 simulation platform. Sim racers and influencers also go head to head in separate races to the Formula E drivers.

In the “Race at Home Challenge” in Hong Kong, Neel Jani of the TAG Heuer Porsche Formula E Team finished in twelfth place.