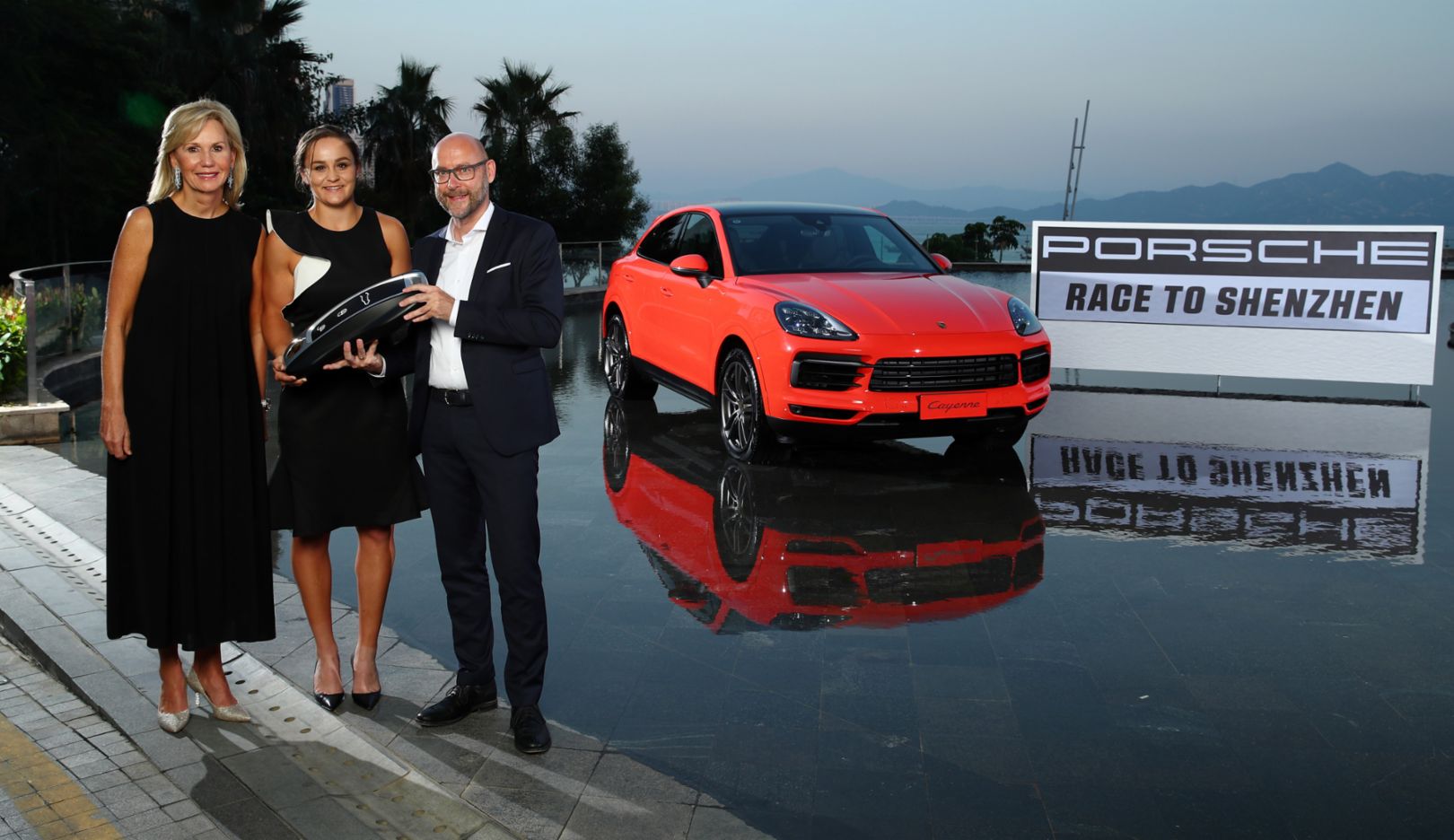 The Australian Ashleigh Barty has won the “Porsche Race to Shenzhen”, the official qualification for the Shiseido WTA Finals due to begin on Sunday. On Friday, she took possession of the winner’s prize, a Porsche Cayenne Coupé.

The 23-year old world No. 1 enters the prestigious year-end tournament for the eight most successful players as the favourite. After five years in Singapore, the event will be staged in the Chinese high-tech metropolis of Shenzhen for the first time.

“After such an exciting year, I’m incredibly honored to have also won the ‘Porsche Race to Shenzhen’,” said Ashleigh Barty. Even before play starts at the Shiseido WTA Finals, 2019 has been the most successful year of the Australian’s career. In addition to her maiden Grand Slam win at the French Open in Paris, she also won the WTA tournaments in Miami and Birmingham. She was the runner-up in Sydney and at the start of October in Beijing and will be looking to continue her winning ways in the Shenzhen Bay Sports Center. “I really hope I can keep this momentum for the WTA Finals and play my best tennis here at the end of what has already been a very special WTA season for me.”

“We’d like to warmly congratulate Ashleigh Barty on winning the ‘Porsche Race to Shenzhen’. Her prize of the athletic Cayenne Coupé is the fitting reward for her magnificent tennis performances this season,” said Detlev von Platen, member of the Executive Board responsible for Sales and Marketing at Porsche AG. “The WTA Finals are another highlight in our successful partnership with the WTA, and the perfect finale to a fantastic tennis year.”

Alongside Ashleigh Barty as the winner of the “Porsche Race to Shenzhen”, Karolina Pliskova (Czech Republic), Naomi Osaka (Japan), Simona Halep (Romania), Bianca Andreescu (Canada), Petra Kvitova (Czech Republic), Belinda Bencic (Switzerland) and Elina Svitolina (Ukraine) have also qualified for the year-end tournament. It means the last two winners of the Porsche Tennis Grand Prix, Karolina Pliskova in 2018 and Petra Kvitova in 2019, will be competing in China. A Porsche Team Germany player has also made it to the season’s highlight for the top eight singles players and doubles pairings – Anna-Lena Grönefeld has secured herself a place in the field containing the top eight doubles pairings alongside the Dutchwomen Demi Schuurs.

As the partner of the Shiseido WTA Finals, Porsche is providing 40 vehicles for the event. A Porsche Cayenne Coupé will be additionally standing at the side of the Centre Court in the Shenzhen Bay Sports Center, and there will be a variety of Porsche activities for Fan Village visitors. China is one of the core markets for the sports car manufacturer. Jens Puttfarcken, CEO of Porsche China, is therefore looking forward to the premiere of the prestige event in Shenzhen. “The WTA Finals have developed into an event with worldwide appeal and is also one of the sports highlights of the year in China,” he says. “We’re very proud that we can be a part of the success story with Porsche China this year.”

The “Porsche Race to Singapore” has crossed the finishing line – with Simona Halep as the victor.

Fuel consumption/Emissions*
Fuel consumption* combined 10.2 - 9.9 l/100km
CO2 emissions* combined 234 - 225 g/km
Porsche uses cookies to optimise and improve the website, as well as enable the availability of certain functions. By continuing to use this website, you agree to our use of cookies. For further information, please click  here