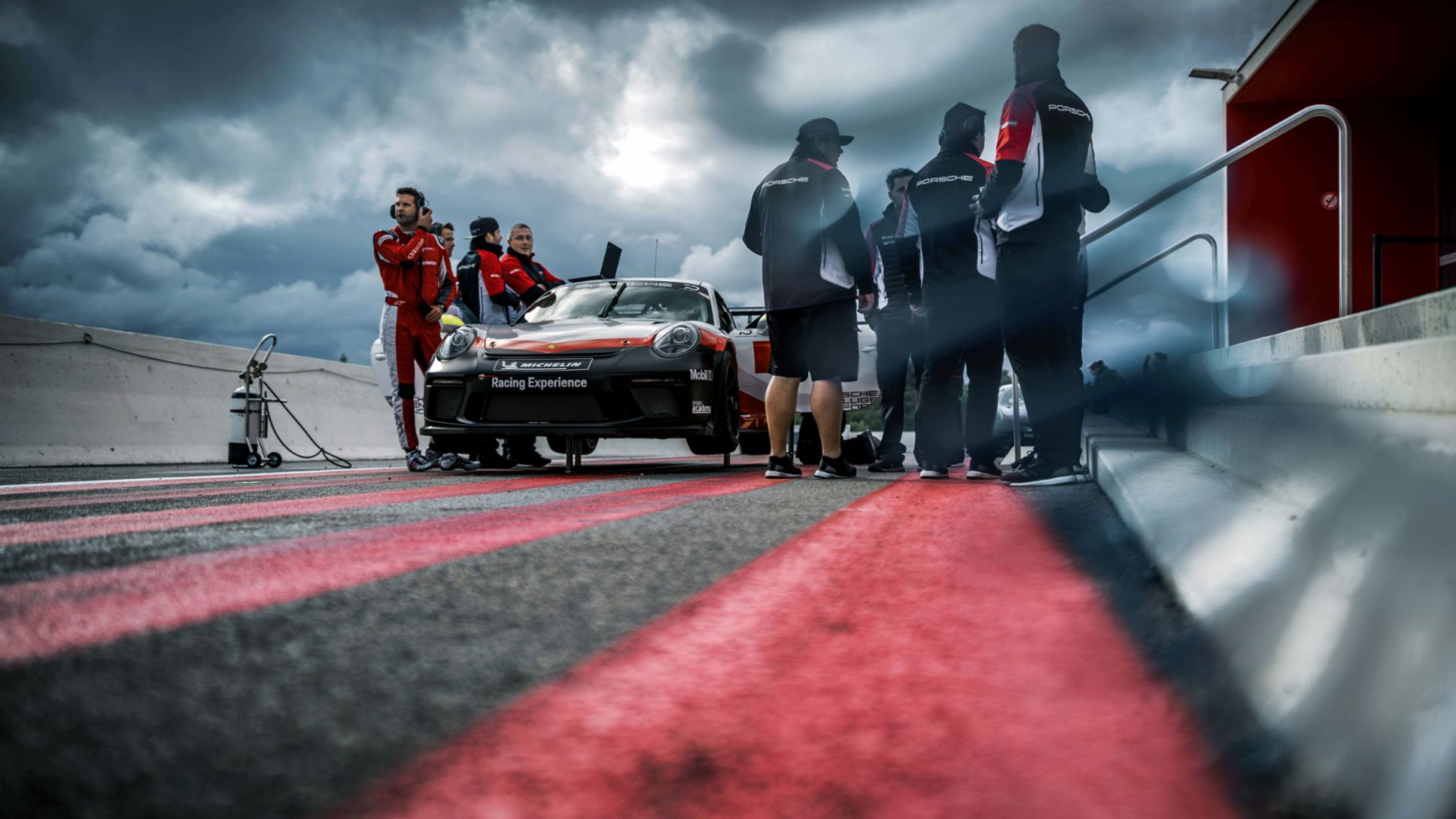 There’s no instruction manual for getting started in the world of motorsports. Karting is one possibility. The Porsche Racing Experience is another.

Many stories begin with a bold decision. Or rain. Or both, as is the case today on the Circuit Paul Ricard racetrack in southern France, some fifty kilometers east of Marseille. Janine Lissautzki raises the radio to her mouth and presses the talk button. It clicks. Sixty-five employees along the track and in the pits listen with rapt attention. The thirty-three-year-old is the project manager at Manthey-Racing for Porsche Racing Experience, an exclusive driving program that comprises professional training and full-service support on three successive performance levels.

Lots of work and lots of dedication

More than four months ago, Lissautzki and her team started planning for the Level 1 introductory course by booking instructors, physiotherapists, and a mental coach and coordinating the delivery of twenty-one Porsche 911 GT3 Cup cars. Lots of work, lots of dedication—and now the rain. It’s an unwelcome challenge for all involved on this first day of driving—particularly for the sixteen participants who are keen to get on the track. They hail from Germany, Dubai, France, Ireland, Japan, Luxembourg, Norway, Hungary, and the United States, and they have audacious plans. Over the course of just five days, they aim to learn the fundamentals of racing in theory and practice.

Lissautzki stands in the pit: dazzling blue eyes, wet blond hair, and a powerful voice. “The race management has opened the track; green light in three minutes.” The rain has stopped. The asphalt is nearly dry; only the small depressions in the pit lane still have a bit of water in them. The dark, blue-black cloud formation moves on and a slice of sky opens up. A quick glance at the pupils. The project manager cracks a smile. Everything under control.

The participants are ready. Kevin Woods is no exception. The forty-seven-year-old from San Francisco worked as a network engineer for Google for many years. His helmet forms a protective shell around his tension, but his eyes betray concentrated nervousness. Voices and engines combine in a cacophonous din; instructors, mechanics, and helpers lean into the Cup cars, drying the soles of the racing shoes, tightening belts. Woods gives a thumbs-up. His instructor Felipe Fernández Laser fastens the outer safety net to the vehicle cage up front. If worst comes to worst, the net will keep the driver from hurtling out of the car, seat and all. They learned that right at the beginning, as day one of training is reserved for theory: introduction to vehicle technology.

Woods, the picture of focus, doesn’t speak. He’s too concentrated on the 5.842-meter course in Le Castellet before him; he drives it one last time in his mind, clockwise, his hands firmly on the wheel. The Signes curve at the end of the long Mistral Straight in particular is on his mind. Signes, the slight right-hand bend named for the former place of residence of course builder Paul Ricard, is a trial of nerves for drivers. Keep the pedal to the metal or briefly ease up? It’s up to each driver individually. It is possible—if one’s up to the challenge.

Talent scouting as a matter of principle

Porsche has been offering racetrack training for years with their program Track Experience. In the autumn of 2017 it launched Porsche Racing Experience—“the perfect way to get started in motorsports, using a goal-oriented approach with professional support,” says Frederic Klein, who shares the project management of Porsche Racing Experience with Paul Gregor. The targeted scouting and development of motorsport talent, among Porsche customers as well, is a principle of the Stuttgart-based sports-car manufacturer. And that dedication has brought forth world champions and Le Mans winners. Talent is one part of the equation. Drive, hard work, and perseverance are the other.

In Level 1, Porsche Racing Experience aims to prepare recreational drivers for their first racing season by, for example, obtaining their international D racing license. The course includes a track walk, physiotherapy, mental coaching, and vehicle technology instruction as well as safety-car training, passing maneuvers, intensive data analysis after each session, and simulation of a final race.

Why is he here? “I want to continue to improve my driving skills,” says Woods after a few laps behind the Porsche driven by his instructor. He did a lot of kart racing back in the day. He’s keen to test his mettle on Level 2, contesting a whole racing season, for instance, in Germany. But most of all he likes to be on the racetrack in the USA and spends a lot of time there with his family, which he has just swapped for his Porsche family for a week. The members of this family include Felipe Laser, a certified Racing Experience instructor; former factory driver and Porsche Junior Coach Sascha Maassen; and former Formula One driver Christian Klien of Austria, who’s a certified Porsche instructor as well.

Woods: “The program is very intensive and very compressed”

Woods knows many of the other drivers in the field, including Japanese driver Shintaro Akatsu, a businessman with three homes, one of which is in Tokyo. Like Woods, the fifty-six-year-old is completing Level 1 for the second time. Voluntarily. “The program is very intensive and very compressed,” he says. “If you don’t have much time, there’s no better way to get to know the limits of a race car.” Akatsu has racetrack experience. He takes that feel for the car with him every time he gets behind the wheel—at home in a Porsche 918 Spyder, among others.

Chief engineer Felix Stiller pulls his laptop from the roof of the car and walks back to the track office, where he evaluates the data from the race cars in a matter of seconds: water temperature, oil pressure, brake pressure curve. “The Racing Experience is the best way to progress from recreational driving to being a race-car driver,” says the twenty-eight-year-old. He spends most weekends of the year on the racetracks of the world. Laser sits next to him in front of four monitors and superimposes his reference lap on Woods’s.

Participants learn the most from practical examples. “Kevin has experience in the Cup car and keeps a super pace,” says Laser approvingly. “He has a good feel for the car.” But today something’s missing to achieve perfection. “A bit slower into the curve and faster out. And steer as little as possible,” Laser advises his pupil. Woods knows all this. He nods.

It’s difficult to capture the Porsche legend in words, but one can certainly attempt to experience it. Most of the Racing Experience participants have already sat in a Cup car before, for example, in a 911 GT3 Cup as part of Porsche Track Experience. Even so, the VR glasses sent to them by the team in advance help them to visualize the complex cockpit in the lightweight one-seater with an assist from virtual reality.

Mark Webber arrives. The former Formula One star, endurance world champion, and current Porsche brand ambassador holds career talks with the participants. Woods is looking forward to it. “He’s a role model. He’s achieved practically everything in racing. I trust him 100 percent.” He’ll tell Webber about his goals, but most of all: he’ll listen to him.

It’s Friday afternoon, day five, 14.8 degrees Celsius. The run-off areas, crisscrossed by black tire marks, are gleaming blue and red. Together with the red-and-white-painted curbs, they engender an odd sort of harmony. A special asphalt cover layer with varying friction forces will decelerate the cars in case of driver error. It all makes Circuit Paul Ricard one of the safest racetracks in Europe. Now comes the moment for which Woods and the fifteen other participants have worked so hard. The nerve-jangling corner awaits. The race begins.

For those who wish to learn how to race from the ground up in a Porsche 911 GT3 Cup, Porsche Racing Experience is just what the doctor ordered. Three levels are offered, each building on the one before. Next opportunity: Level 1 in Portimão, Portugal, November 22–27, 2019. For more information about this training and its comprehensive support, visit: www.porsche.com/racing-experience

Porsche Driving Experience Winter: Rarely has a driving school offered so much fun.