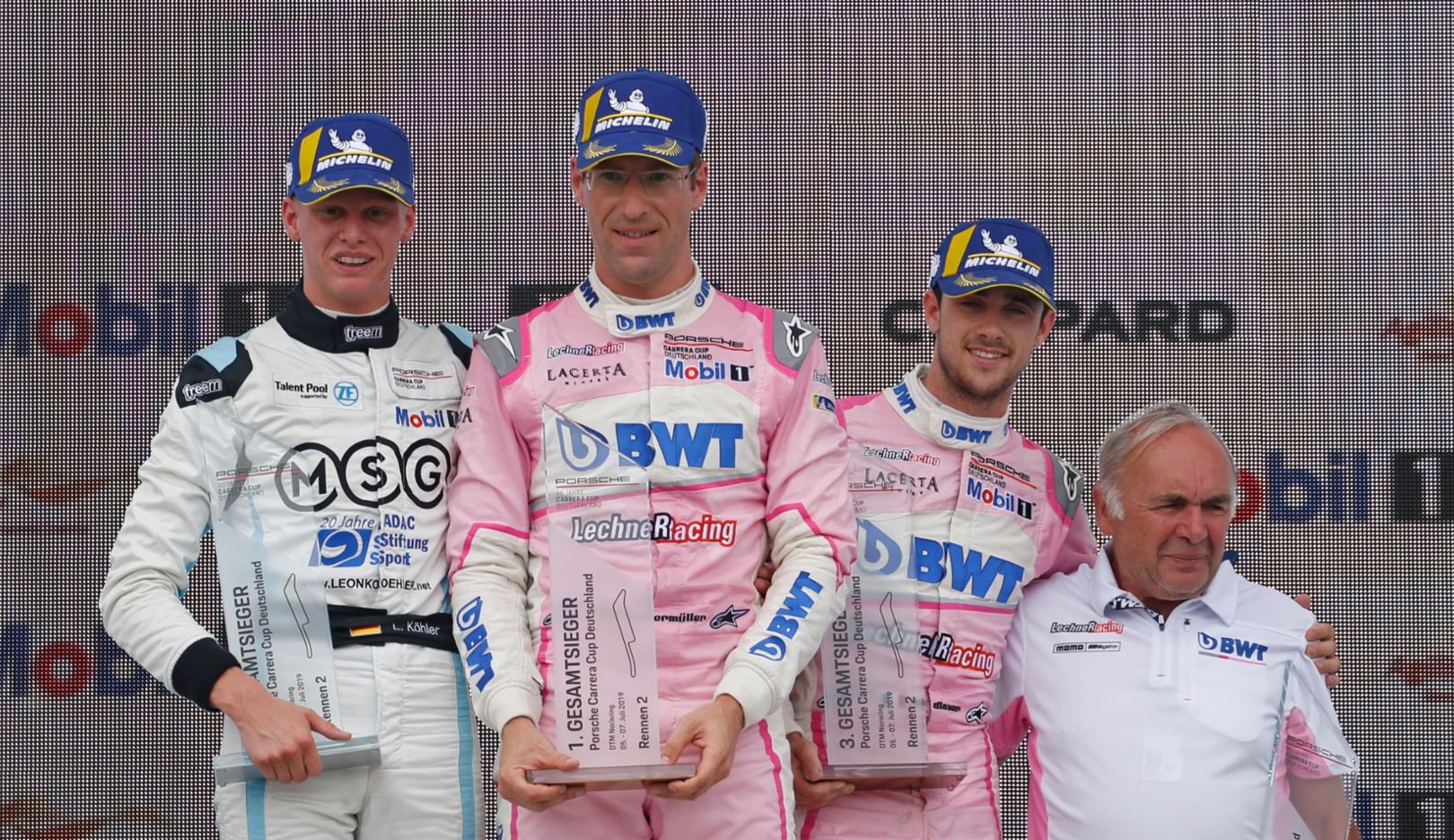 Michael Ammermüller has claimed his second victory of this season’s Porsche Carrera Cup Deutschland: The German won round eight on Sunday after an accident threw the first three out of contention. Porsche Junior Julien Andlauer won the race on Saturday.

“Honestly, I’d already speculated that the rivals in front of me couldn’t finish the race on this narrow street course, but, of course, I didn’t expect such a perfect outcome,” said Ammermüller. Behind his 485 hp Porsche 911 GT3 Cup, Leon Köhler (D/MSG/HRT Motorsport) and Porsche Junior Julien Andlauer (F/BWT Lechner Racing) crossed the finish line in positions two and three.

Henric Skoog (Overdrive Racing by Huber) took off into the race run as support to the DTM from pole position. At the start, the Swede defended himself against his two teammates Larry ten Voorde (Netherlands) and Igor Walilko from Poland. The crucial scene of the race came in the 21st lap: As the trio entered the first corner, their vehicles collided. The safety car was deployed and the race for the three Huber drivers came to an early end. The most to benefit was Ammermüller. The seasoned specialist pulled past, snatched the lead, and held on to it until the flag. Karsten Sohns, CFO of Porsche Deutschland GmbH, presented him with his winner’s trophy. For 19-year-old Köhler of the Team MSG/HRT Motorsport, second place marked his first podium result in the German Carrera Cup. “Of course I profited from the retirements, but I’m very happy with this result. There’s nothing better than standing on the podium,” said an elated Köhler.

Prior to the leading trio’s accident, Porsche Junior Andlauer was in fourth place. To avoid the crash, the 20-year-old had to swerve wide and was unable to defend his position from Ammermüller and Köhler. “It’s a great result for the championship. If I hadn’t have gone so wide after the collision I could have won,” explained Andlauer. Fourth place went to Jaap van Lagen (NL/Förch Racing), with Porsche Junior Jaxon Evans (Team Project 1 – JBR) on fifth. “The atmosphere here at the Norisring was truly fantastic. I managed to make up four places, and I had a great time,” said Evans. Behind the New Zealander, David Kolkmann (D/Black Falcon), Luca Rettenbacher (A/MSG/HRT Motorsport) and Jean-Baptiste Simmenauer (F/Lechner Racing Team) claimed positions six to eight.

Matthias Jeserich (CARTECH Motorsport by Nigrin) celebrated his first victory in the amateur class on the 2.3-kilometre street course. The German won ahead of Andreas Sczepansky (D/QA Racing by Kurt Ecke Motorsport) and Carlos Rivas (L/Black Falcon Team Textar). Despite his retirement, ten Voorde still leads the Porsche Carrera Cup Deutschland with 123 points, 4.5 points ahead of second-placed Andlauer. Ammermüller (100.5 points) ranks third in the championship after eight races. Evans is the best rookie with 123.5 points. With 147.5 points to his credit, Rivas leads the amateur classification.

Points’ standings after 8 of 16 races:

Round seven of the Porsche Carrera Cup Deutschland on the Norisring treated spectators to some action-packed racing to the last corner. In Saturday’s race, Porsche Junior Julien Andlauer (F/BWT Lechner Racing) outpaced the 29-strong field on the street circuit of Nuremberg. His German teammate Michael Ammermüller and fellow Porsche Junior Jaxon Evans (NZ/Team Project 1 – JBR) joined him on the podium. “After my birthday on Friday, this victory is a wonderful gift. To start from fourth on the grid and win was really tough,” said Andlauer, delighted with his second win of the season in the 485 hp Porsche 911 GT3 Cup.

The seventh race of the season run as part of the DTM weekend was contested in hot temperatures of 30 degrees Celsius. Larry ten Voorde (NL/Overdrive Racing by Huber) headed into the race from pole position and was immediately put under pressure by Ammermüller. This resulted in the two cars touching. Henric Skoog (S/Overdrive Racing by Huber) grabbed the chance and swept into the lead. Ten Voorde, however, promptly made a countermove in the first lap. Shortly afterwards, Andlauer, Ammermüller and Evans also overtook Skoog. In lap 15, Andlauer took the lead after squeezing past the driver from Boekelo at the exit of the hairpin at the Dutzendteich. The vehicles made contact, which signalled an early end for ten Voorde after his car sustained damage to the suspension. Although drizzle set in towards the end of the race, Andlauer brought home a safe victory.

His teammate Ammermüller finished the 31-lap race on second. “My start was super, but unfortunately Larry ten Voorde and I touched. Had this not happened I think I could have won,” said Ammermüller. Porsche Junior Evans came out on top in the fierce duel for third against Jean-Baptiste Simmenauer (F/Lechner Racing Team). The New Zealander was thrilled with his second podium result so far this season: “Jean-Baptiste Simmenauer put me under immense pressure. The fight was huge fun. It feels terrific to finally finish in the top three again after Hockenheim.”

#CarreraCupDE - #Porsche Junior @JAndlauer finished P1 at @norisring. It's the second win of the season for the Frenchman pic.twitter.com/iZTwgRu4K3

Fifth place went to Skoog ahead of Leon Köhler (D/MSG/HRT Motorsport), the best driver in the Porsche Carrera Cup Deutschland Talent Pool, and Luca Rettenbacher (A/MSG/HRT Motorsport). Igor Walilko (PL/Overdrive Racing by Huber) crossed the finish line on the 2.3-kilometre racetrack in eighth. Victory in the amateur class went to Stefan Rehkopf (Huber Racing). Trailing the German were Georgi Donchev (BG/Huber Racing) and Carlos Rivas (L/Black Falcon Team Textar). For Richard Wagner, the doubleheader event on the Norisring is a highlight on the race calendar. The 19-year-old comes from the town of Amberg, just 70 kilometres from Nuremberg. Wagner took the flag in 13th in a car with a special livery: a red and white design and the logo of the German Football Club 1. FC Nürnberg.

Karsten Sohns also witnesses the races this weekend on Germany’s only street circuit. The CFO of Porsche Deutschland GmbH watched the race live and presented Andlauer with the winner’s trophy on the podium. Ten Voorde still leads the championship after seven races with 123 points. Second-placed Andlauer managed to reduce the gap thanks to his win and now has 102.5 points to his credit. Ammermüller ranks third with 75.5 points.

The eighth race of the Porsche Carrera Cup Deutschland takes place on Sunday at 11:15am also as support to the DTM at the Norisring. For the first time in his career, Henric Skoog starts from pole position. The German TV station Sport1 broadcasts the race live.

For races nine and ten, the Porsche Carrera Cup Deutschland travels across the German border for the first time this season: from 9 to 11 August, the national one-make cup heads to the Zandvoort Circuit in the Netherlands. Larry ten Voorde (Boekelo) and Jaap van Lagen (Ede) will tackle the race on the North Sea track in front of home crowds. 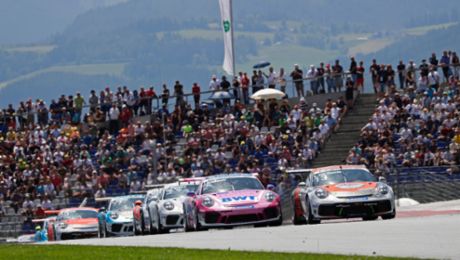 At the Red Bull Ring in Austria the Porsche Junior scored his maiden victory in the national one-make cup series. 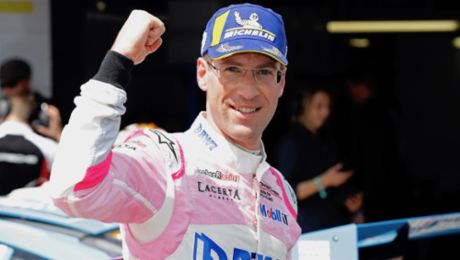 The seasoned specialist won round four from pole position at the wheel of his Porsche 911 GT3 Cup. 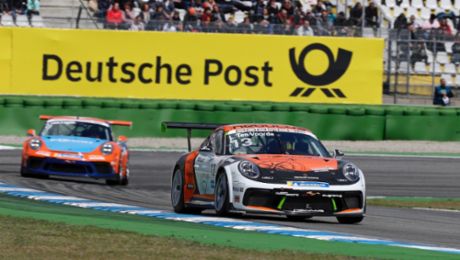 PCCD: Larry ten Voorde kicks off the season with a double victory

At the Hockenheimring Baden-Württemberg, the Dutchman won the races on Saturday and Sunday.

After a guest appearance in 2019, the Prince of Sweden is committed to a full season in Scandinavia's leading championship for 2020.