From fabric caps to carbon shells

The white stars made of adhesive film on Hans-Joachim Stuck’s helmet made the driver as famous as his great racing successes. The driver’s safety equipment became a stylish trademark, but safety was always the top priority.

Shirt, jacket and bow tie topped with a fabric cap: this was how drivers raced when motorsport was still in its infancy. Drivers have always paid attention to their appearance. The circle of white stars around the visor opening of his dark blue helmet that Hans-Joachim Stuck wore for almost his entire racing career was unmistakeable.

In 1971, the then 20-year-old young professional Stuck wanted to wear a full-face helmet, which were still new at the time, for his first race as a works driver. However, the plain colours were not exciting enough for him. Then his friend at the time, Mucki Buchner, came up with the idea of adding stars: adhesive film was quickly obtained, the stars were cut out precisely and stuck to the helmet.

The fabric caps of the early years in motorsport were replaced by leather caps combined with goggles in the 1930s and 1940s. Peter Snell, an American sports car driver in the Sportscar Club of America races, was one of the first drivers to wear protective headgear. It was made of plastic and padded with cork on the inside. In 1956, Snell nevertheless had a fatal accident in a race with his Triumph TR2. In his honour, his family and members of the Sportscar Club of America established the Snell Memorial Foundation. The foundation was the first organisation to develop benchmarks for safe protective headgear for racing drivers.

The full-face helmets, which first came to the fore in the 1960s, provided even more safety for drivers. They delivered all-round protection with their visor and replaced the then customary jet helmets which had an open face in the front. While the first of these helmets were still made of fibreglass, carbon, an extremely robust and simultaneously lightweight material, is the base material for modern helmets. “Today, a carbon shell approximately one centimetre thick in the front section of the helmet provides almost impenetrable protection,” explains helmet specialist, Peter Bürger. He has dealt with the right protective headgear for racing drivers for approximately 40 years and has been involved in this capacity in more than 400 Formula 1 Grands Prix.

In its advanced ballistic protection standard 8860, the International Automobile Federation (FIA) specifies the exact requirements for helmets for use in motorsports. For example, the polycarbonate visor has to withstand a steel ball impacting at a speed of 500 kilometres per hour. In the test, the impact mark of the ball on the visor is subjected to a hot flame with a temperature of 190 degrees. The flame must not penetrate the damaged visor for at least 30 seconds.

In addition, the protective headgear must pass an impact test without becoming damaged. For this test, the helmet is placed on a dummy head and dropped from a height of six metres onto surfaces of various types and consistencies. It must not sustain any damage. All helmet manufacturers must have their products tested in an FIA-certified laboratory for approval. The Newton Institute in Milan is at the forefront of this type of testing.

Timo Bernhard, long-time Porsche works driver, Le Mans winner and world endurance champion, among other things, and today head of his own Porsche team in the ADAC GT Masters, knows the requirements that drivers have: “For me, a helmet always had to be light in order to better withstand the enormous centrifugal forces, not have too large a shell so that you have enough freedom of movement in the cockpit, and of course it must offer an optimal field of vision through as large a visor as possible.”

It goes without saying that Bernhard was always instantly recognisable thanks to his helmet. “The basic design always consisted of black, red and gold – Germany’s colours. I only redesigned the top from time to time. This was good for my collection, as each helmet represents a particular time in my career.”

Hans-Joachim Stuck, today President of the German Motor Sport Federation (DMSB) and Motorsport Representative for the Volkswagen Group, ended his career as a racing driver in 2011 with a start together with his sons Ferdinand and Johannes in the 24-hour race at the Nürburgring. “Strietzel’s” sons had already continued the family’s motorsport tradition previously and stepped into their famous father’s shoes, just as Hans-Joachim once followed his father Hans into the motorsport scene. Of course, his helmet with the stars always came to the races. His sons also continued with this tradition. In their races, they always used a helmet design that included the distinctive Stuck stars.

Porsche publishes a wealth of entertaining and informative contributions from the world of Porsche at its website, 911-magazin.porsche.de. Whether it's presenting new models or highlighting milestones in the company's history, the online TV series complements the Porsche customer magazine “Christophorus” and is published at the same intervals, in both German and English. Additional footage material and photos are freely available for journalistic purposes. 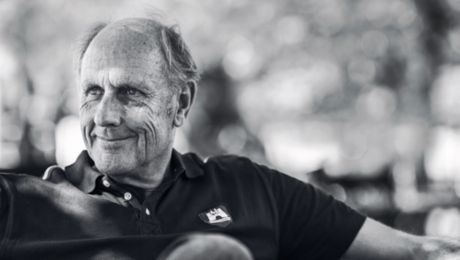 The two-time winner of the 24 Hours of Le Mans has since retired but is still smitten with fast cars. 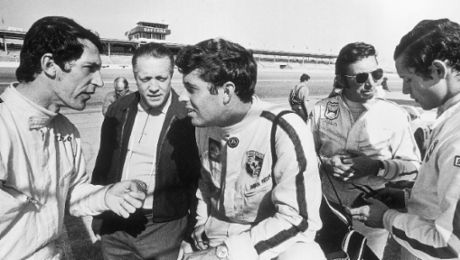 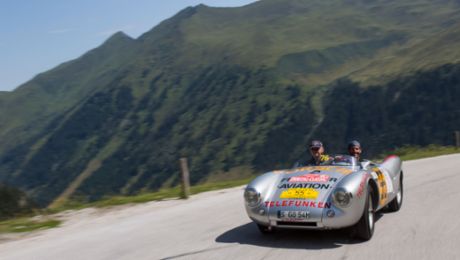 25th Ennstal-Classic: Milestones in the history of Porsche

The Porsche Museum is competing at the 25th Ennstal-Classic.