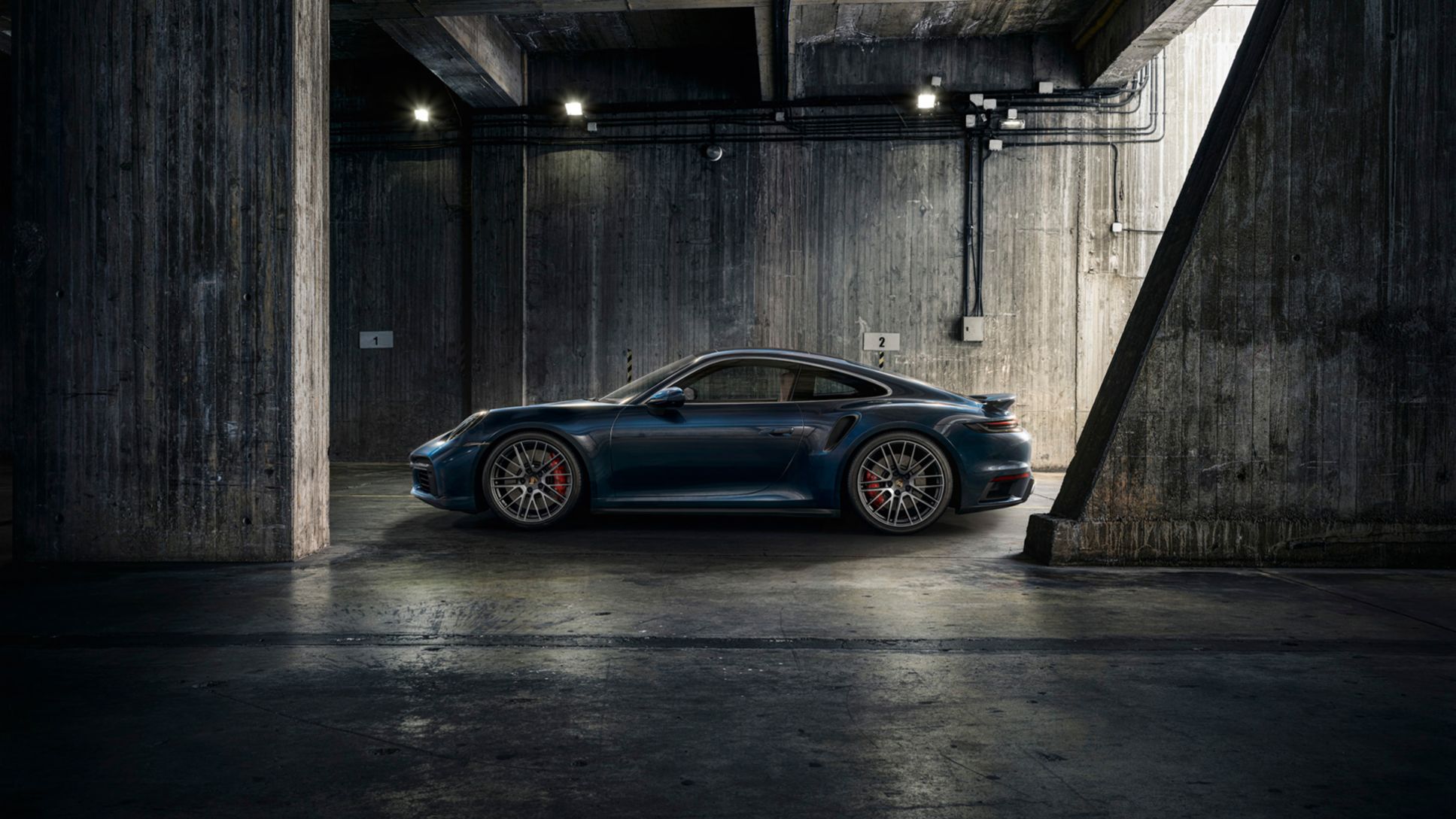 Since its introduction over 45 years ago, the Porsche 911 Turbo has balanced  everyday usability with exhilarating performance.

The 2021 911 Turbo models follow in prestigious footsteps: the 911 Turbo has been the ultimate intersection of performance and luxury within the 911 model line since 1975. The latest generation of 911 Turbo is more than twice as powerful as the original 930 Turbo, which featured a three-liter, six-cylinder boxer engine, single turbocharger and an output of up to 260 PS, depending on the market.

Like the recently introduced 2021 911 Turbo S, the six-cylinder boxer engine in the new 911 Turbo has a displacement of 3,745 cc and now features symmetrical VTG turbochargers with electrically controlled bypass valves. In conjunction with the redesigned charge air cooling system and the use of piezo fuel injectors, this improves throttle response, performance, torque delivery and the free revving nature of the engine. In the Turbo models, this engine makes 572 hp. Complementing the increase in power, the chassis has been tuned to offer an even greater level of performance. Adopting the changes implemented on the new 911 Turbo S earlier this year, steering response and precision on the new 911 Turbo models have been further improved thanks to an additional 1.65 inches of front track width and the new 20-inch 255/35 tires (up from 245/35 previously).

Also shared with the 2021 911 Turbo S, the Porsche Traction Management (PTM) active all-wheel drive system in the 911 Turbo is able to transfer even more power to the front wheels than before. Traction at the rear axle, which is equipped with rear-axle steering as standard, is increased even further by 0.39 inches of added track width compared to the last 911 Turbo, as well as 315/30 tires on 21-inch wheels (305/30 R 20 previously). The revamped brake system is even larger than on the last 911 Turbo and can be recognized by the red fixed calipers. The front cast iron brake rotors now measure 408 millimeters in diameter (28 mm larger than the previous 911 Turbo) and are 36 millimeters thick (plus 2 mm). The rear axle features 380-millimeter brake rotors that are 30 millimeters thick. Porsche Ceramic Composite Brakes (PCCB), standard on the 911 Turbo S, with 10-piston front calipers, are available as an option.

A Sport Exhaust system that was introduced on the 2021 911 Turbo S is also optionally available for the 911 Turbo for the very first time. Two different suspension options are also new: while the standard PASM suspension offers a greater spread between agility and ride comfort than before, the particularly performance oriented, electronically controlled PASM Sport Suspension with a 0.39 inch (10 mm) lower ride height compared to the standard suspension benefits the agility of the new 911 Turbo even further with a set-up aimed at further enhancing driving dynamics. Porsche Dynamic Chassis Control (PDCC), which uses active anti-roll stabilization, is available as an option for the 911 Turbo models.

The muscular design of the 911 Turbo reflects the significant increase in power and performance of the new generation. Shared with the 2021 911 Turbo S, the body of the new 911 Turbo models is 1.8 inches wider than the predecessor at the front fenders to accommodate the increase in track width and tire size compared to the previous model. The new front luggage compartment lid featuring a striking recess in the center underlines the performance-focused character. LED headlights with PDLS Plus are fitted as standard. At the rear axle, the body is now 0.78 inches wider than the previous generation 911 Turbo (991), also to accommodate wider track and tires. Other distinguishing features of the new 911 Turbo are the enhanced adaptive aerodynamics with controlled cooling air flaps at the front, a larger active front spoiler and the significantly increased size of the active rear spoiler. The air intakes on the rear side panels, characteristic for the 911 Turbo, now draw in process air rather than cooling air. The charge air coolers are now positioned directly in the air stream under the rear decklid. The continuous light bar with LED tail lights as well as the new louvered rear decklid grille with silver trim strips round off the design of the rear end.

The appearance and performance-focused character of the vehicle can be additionally enhanced by the optional Lightweight package and Sport package. The Lightweight package for the coupe reduces the vehicle’s weight by about 66 pounds. Full Bucket seats, the deletion of the rear seats and reduced sound insulation contribute to the weight savings and allow the exhaust note to enter the cabin more intensely. The Sport package encompasses all the elements of the SportDesign package as well as additional applications in Black, carbon fiber elements and Exclusive Design clear taillights.

In 1995, the 993 generation 911 Turbo laid to rest the sometimes macho image of its predecessors. A true gentleman – were it not for its brute speed …