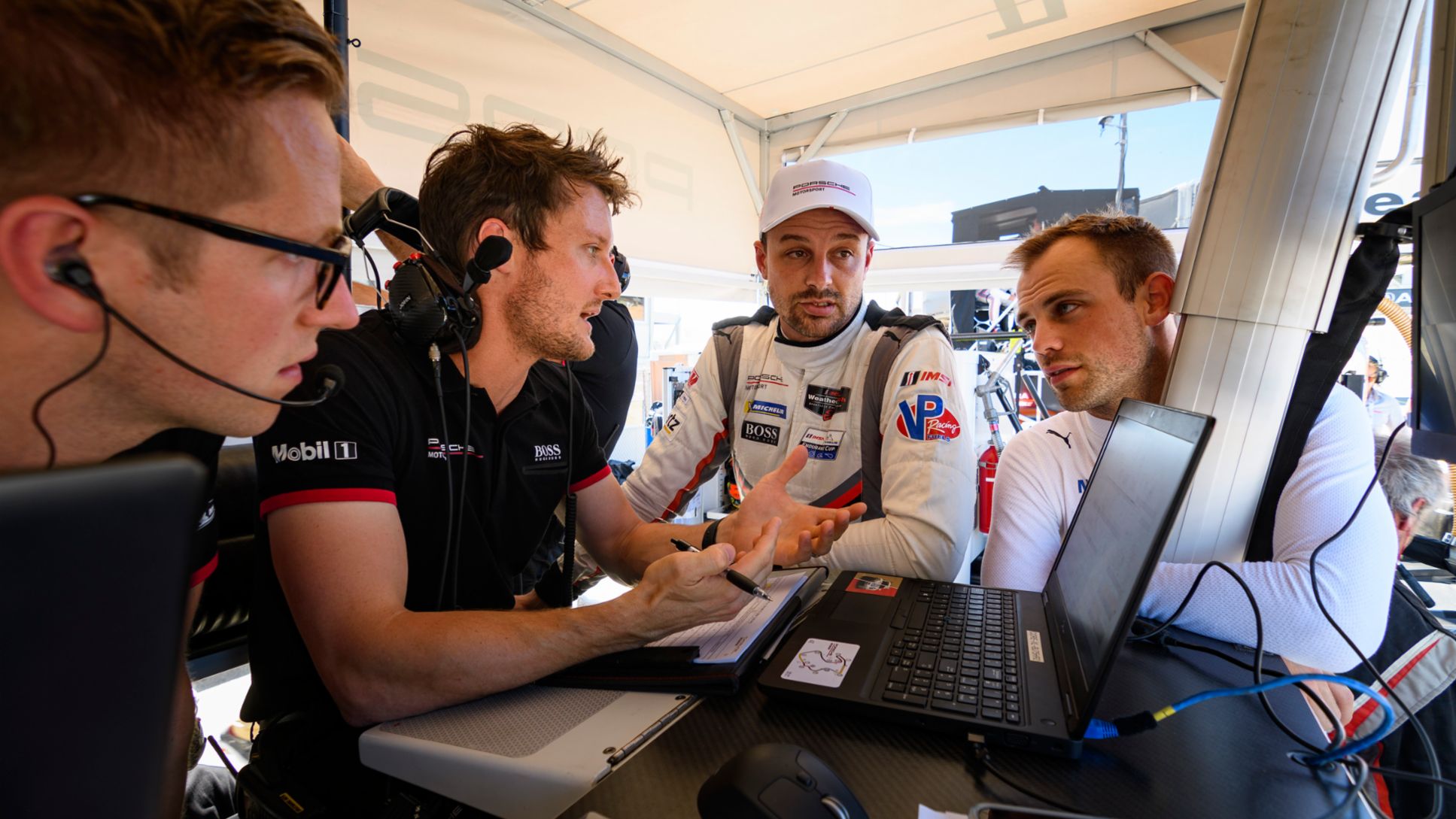 To the Point. Porsche Teams Travel to Monterey with Championship Aspirations.

To the Point. Porsche Teams Travel to Monterey with Championship Aspirations.

Porsche factory and customers teams sit atop multiple class point standings entering Round 11 of the 12-race IMSA WeatherTech SportsCar Championship season. California’s WeatherTech Raceway Laguna Seca (WRLS) plays host to the Monterey SportsCar Championship on September 15 where the factory Porsche GT Team will attempt to extend its lead in the GTLM class Driver, Team and Manufacturer points’ standings with a pair of Porsche 911 RSR race cars. The drivers of the No. 912 Porsche GT Team entry, Earl Bamber (New Zealand) and Laurens Vanthoor (Belgium), currently hold an 11-point lead in the Drivers’ and Team championships over their No. 911 team car and teammates Patrick Pilet (France) and Nick Tandy (Great Britain). While no GTLM championship can be secured at the Monterey, California - area track, Porsche can be crowned Manufacturer Champion in the GTD class of the WeatherTech Sprint Cup with a strong performance by one of the two customer teams fielding the 911 GT3 R: Pfaff Motorsports or Park Place Motorsports. Pfaff’s Zach Robichon (Canada) can also win a hotly contested Sprint Cup Drivers’ title entering that individual championship’s final round in Monterey.

At two-hours and 40-minutes, Sunday’s multi-class race is the final round of the WeatherTech Sprint Cup – a championship within a championship that crowns the driver(s), team and manufacturer who accumulates the most points in races shorter than six-hours in length. Robichon can earn his first IMSA championship in the No. 9 Pfaff Motorsports Porsche 911 GT3 R he shares with Porsche Selected Driver Scott Hargrove (Canada). The 2018 IMSA Porsche GT3 Cup Challenge Canada by Yokohama champion has two wins on the season (Lime Rock and Road America) and holds a one-point lead in the Sprint Cup. Porsche “works” driver Patrick Long (Manhattan Beach, California) is currently in fourth-place entering the final round. Long, who holds the distinction of being the most successful active driver at WRLS with five-wins, will split driving duties in the No. 73 Park Place Motorsports Porsche 911 GT3 R with Team Principal Patrick Lindsey. Lindsey, a Santa Barbara, California-native is a former GTD class winner at WRLS (2015) and considers WeatherTech Raceway Laguna Seca his home track.

Porsche has a five-point lead over Lexus in the Sprint Cup Manufacturer standings, which is only open to GTD class entries. Only the highest finishing entry earns the points for the marque in the Manufacturer’s championship.

In the broader WeatherTech SportsCar Championship for all races, Porsche leads the GTLM class Manufacturer standings. The German brand must start the final two races of the season – at Monterey and in the 22nd Running of the Petit Le Mans at Road Atlanta – to clinch the title. Porsche has won six GTLM class races this season and stood on the podium at each round with at least one of the Porsche GT Team-prepared 911 RSR. Pfaff Motorsports’ Porsche 911 GT3 R has given Porsche two wins in the GTD category.

Porsche has earned 27 major sports car wins at WeatherTech Raceway Laguna Seca (WRLS) since 1957. The German brand is also the leading manufacturer for IMSA victories on the Monterey Peninsula with 18 wins since 1999.