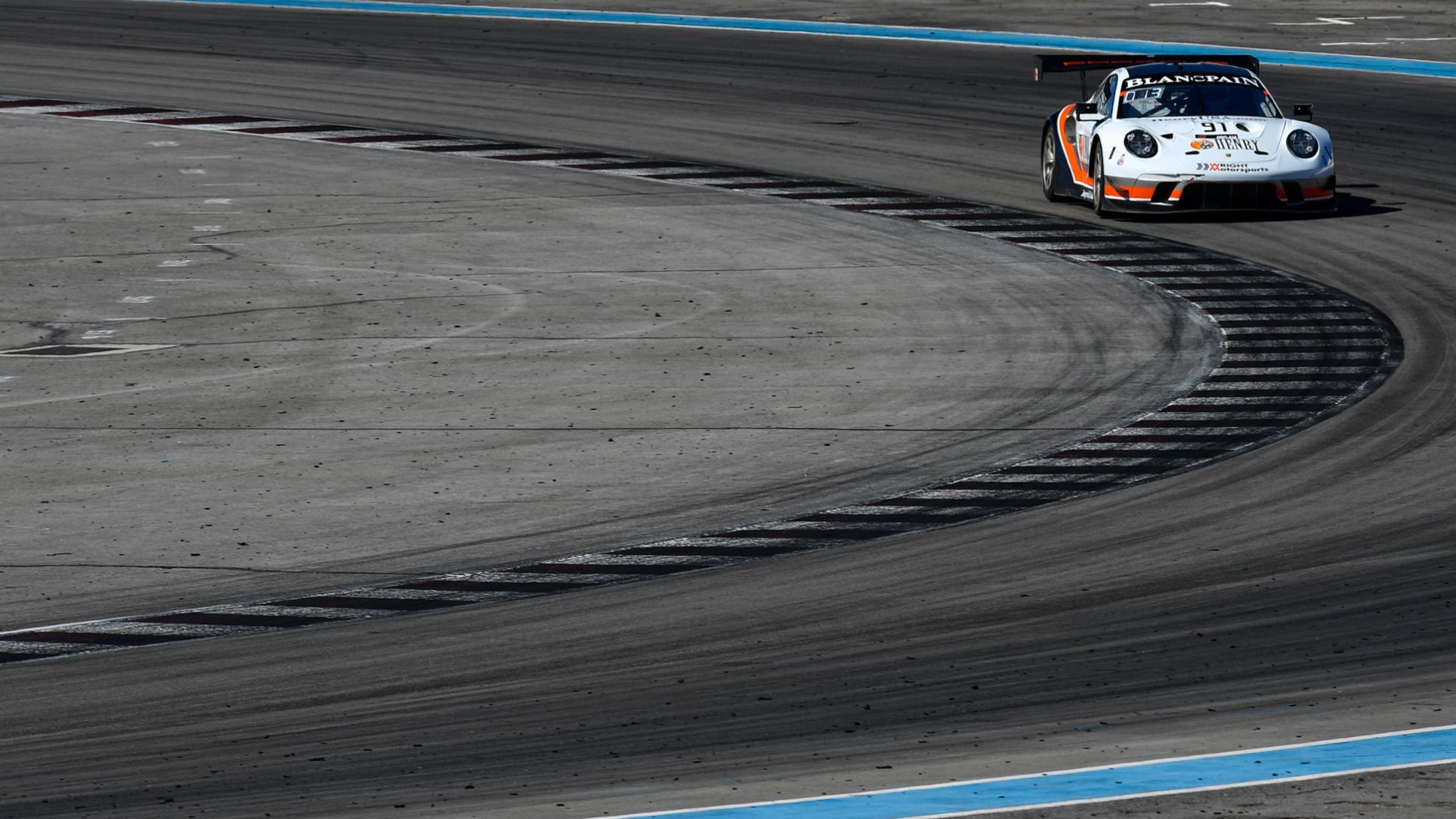 A veteran Porsche entrant, Wright Motorsports entered two Porsche 911 GT3 R race cars throughout the season with the No. 58 Porsche Consulting machine shared by Porsche factory driver Patrick Long (Manhattan Beach, California) and Porsche Selected Driver Scott Hargrove (Canada). The pairing racked-up the sole Pro class win for the 500-HP Porsche customer machine in Race 2 at California’s Sonoma Raceway. Long and Hargrove, both past champions in the SRO, settled for fifth-place in the Pro Drivers’ championship standings. While their teammates in the No. 91 Henry Repeating Arms sister car did not stand on the top-step of the Pro-Am class podium during the season, Porsche Young Professional Matt Campbell (Australia) and Brooklyn, New York’s Anthony Imperato were able to take the third-place position in the Pro-Am class Team Championship. Adding to the trophy case, Imperato took second-place in the Pro-Am Driver’s Championship. It was the amateur driver’s best career finish in an SRO championship. Porsche customer Alegra Motorsports ran a limited race schedule and added a second-place and third-place finish in the Pro-Pro class for the year.

“Looking back on the season, I’m very proud of the entire Wright Motorsports organization. While things didn’t always fair in our favor, we always brought a competitive package with quick drivers, flawless pit stops and a pair of Porsches capable of winning races. Thank you to the entire team at Wright Motorsports, Porsche Motorsport North America and our partners at Henry Repeating Arms and Porsche Consulting for supporting our efforts. We leave 2019 with our heads held high, prepared to come back stronger in the new season.”

“Season-wise, I think we have a lot of things to be proud of and a lot of challenges and frustrations to put behind us. I’m grateful for all of our sponsors and partners who have allowed us to do this. We will be back in some capacity in 2020 and be prepared to go for another championship.”

“I think in times like these it’s best to reflect on what a great year it’s been with Wright Motorsports. It’s been a pleasure to race with them and Pat Long this year. There have been a lot of highlights, the largest one being the win at Sonoma. I think I can speak for everyone when I say that we wish there were a few more of those, but at the end of the day that’s racing. Unfortunately, a lot of things happened that were outside of our control this year, but we took it as a team and made the best of it. Thank you to the whole team; I look forward to the future.”

“It was a very frustrating end to the year after we showed great pace. Luck just wasn’t on our side today, or the entire year actually, with a lot of factors outside of our control hindering our weekend.”

“This was definitely not the weekend we wanted. I’m very disappointed in some of the decisions that were made, but proud of the Wright Motorsports team’s effort. The team gave us a great car and excellent pit stops, but it’s a shame that they couldn’t have been rewarded for it. I’m looking forward to 2020.”

Though new to Porsche race cars, Hardwick has amassed an exceptional amount of experience in his short sports car racing career. He has earned SRO and Lamborghini Super Trofeo World Championships. In 2019, he campaigned the first five IMSA WeatherTech Championship events, earning a podium at Mid-Ohio SportsCar Course, before having to sit out the remainder of the season due to injury. An intensive rehabilitation effort has him cleared for full competition.

Preparations for the upcoming season are already in full effect at the Batavia, Ohio shop. While options are still being evaluated between platforms, the team anticipates additional news including driver lineups at a later date.

“John Wright and Wright Motorsports have been longtime members of the Porsche family. Through the team’s performance and professional approach, Wright Motorsports has become a true representative of the Porsche brand and has been an entry point for many into the Porsche way of racing. We are very pleased to see Ryan Hardwick join Wright and Porsche for the 2020 race season. Having competed against Ryan on the track, we look forward to him racing the Porsche 911 GT3 R rather than against it. We believe this will be a great combination of driver, team and manufacturer.”

“I’m very pleased to welcome 1st Phorm, Mountain Motorsports and their driver, Ryan Hardwick to the Wright Motorsports team for 2020, along with the continuation of our partnership with Henry Repeating Arms and their driver, Anthony Imperato. Securing the new partnerships so early in the game allows us to focus on early preparations for the 2020 season. Having the support of world class companies like these, along with longstanding partnerships like Porsche Motorsport North America, says that we are here to win races. We’re eager to come back strong with the Porsche 911 GT3 R.”

“I’m very excited to be joining Wright Motorsports for the 2020 season. I connected with John Wright back in 2016, when I first entered car racing. I was looking into going the Porsche GT3 Cup Challenge route and really had a great experience speaking with him at the time. I was really impressed with John, how he runs his organization and the amount of effort that he personally puts into all of his programs. I’m a massive Porsche enthusiast and collector. My father was a big Porsche fan, so I grew up idolizing the brand. To be able to race one at this level is a dream come true and I know that partnering with Wright Motorsports will make this an exceptionally competitive program.”

“I am very excited for myself and Henry Repeating Arms to be joining Wright Motorsports for a fifth year. We’ve made a lot of progress as a team with the Porsche 911 GT3R in this past year of both Blancpain GT World Challenge America and IMSA WeatherTech Championship competition and I’m eager to continue building off of that in what I already know will be a very competitive 2020 season.”

The TAG Heuer Porsche Formula E Team completed three days of intensive testing at the Circuit Ricardo Tormo near Valencia, Spain. The “works” team and its two regular drivers, Neel Jani (Switzerland) and André Lotterer (Germany), gained valuable experience running for the first time on track with all teams competing in Season Six of the ABB FIA Formula E Championship. The data gathered will be analyzed at Porsche Motorsport in Weissach, Germany in the weeks leading up to the start of the season. The first two races for the TAG Heuer Porsche Formula E Team – the Diriyah E-Prix on the outskirts of Riyadh, Saudi Arabia – take place on November 22 – 23.

The official Formula E test at Valencia consisted of testing car set-ups and simulations for both qualifying and racing. The tests presented the first opportunity to test and optimize the operational processes with both Porsche 99X Electric cars at a race track. In total, Jani completed 119 laps (roughly 229 miles) of the Circuit Ricardo Tormo. Lotterer was on track for 154 laps (296 miles).

“This was the first time we have gone up against all the other teams, and the first time our complete works team has been able to rehearse race procedures with two cars. A couple of minor incidents meant our first two days were a little shorter. As such, we had to adapt the program a little and make a few compromises. Friday went really well. We were able to complete the full program. For us, it was very important this week to learn how to cope with other cars on the track on a race weekend. As such, the two race simulations were particularly informative. We will now take our homework away with us and make sure we are ready for our Formula E debut in Riyadh, which we are very much looking forward to.”

“We once again learned something with every lap and found a lot of solutions. At the same time, however, we were confronted with a few new questions. It is a very intensive learning process for us. The race simulations were very interesting and helpful for us. Ultimately, however, we are still not where we want to be in the end – at this circuit, at least. Despite this, we have made progress and are confident that we will learn from this ahead of our first race in Riyadh.”

“We did quite a lot of driving on day one. It went well, but we discovered a few outstanding issues on the car where there is still room for improvement. Unfortunately, we lost time on the track on day two, as I hit the wall in the chicane and it took a while to repair the car. That meant I was unable to take part in the race simulation, but I caught up on that on day three. All in all, we focused very hard on our program and did not just concentrate on lap times, as we consciously invested a lot of work in different car set-ups, to sort out as many things as possible and travel to Riyadh as well prepared as possible.”