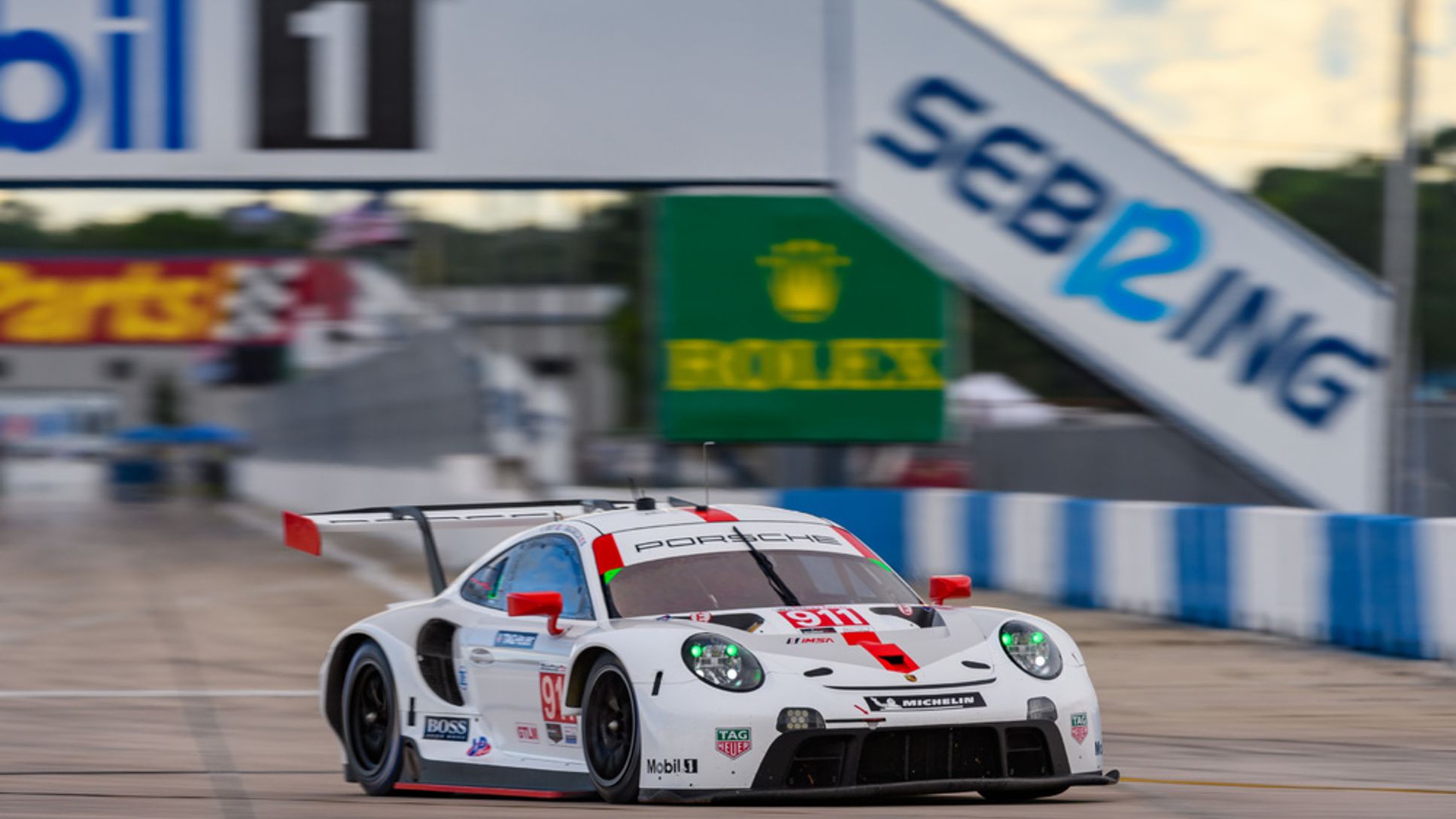 Thank You. From Porsche.

Thank You. From Porsche.

Longtime Porsche customer team Wright Motorsports enters the final round of the 2020 season sitting in second-place of the GTD team and driver standings. The veteran program is only seven points behind the championship leading Acura entering the Mobil 1 Twelve Hours of Sebring on November 14. There could be few places more perfectly suited for the longtime Porsche entrant in the IMSA WeatherTech SportsCar Championship’s GTD class than Sebring International Raceway. The Sebring. Florida track has been the site to several Wright Motorsport successes and North America’s only Porsche factory driver, Patrick Long (Manhattan Beach, California), has two race wins and four total podiums in his career on the 3.74-mile, 17-turn track.

Long, who is scheduled to make his 14th start in the 12-Hours on Saturday, will lead the driving squad of the blue and black Porsche. The Californian will be joined by full-season teammate Ryan Hardwick (Atlanta, Georgia) as well as Porsche expert Jan Heylen (Belgium) in the No. 16 Wright Motorsports Porsche 911 GT3 R for the endurance classic. A string of mid-season podium finishes coupled with other top-six stats have pushed the John Wright-owned operation into the pro-am style class title chase. Success with the lone rear-engine icon in the field could earn the Ohio-based team its first WeatherTech championship.

John Wright, Team Owner, No. 16 Wright Motorsports Porsche 911 GT3 R.
“It has all come down to this final race. We’ve run a perfect season, and we’re ready for this final push. Absolutely everyone on our team has been flawless all year, showing a united strength in what could be considered a stressful season for a variety of factors. I know we’ll give it our best shot and execute the best we can. I’m proud of everyone and hope we’re there in the end to celebrate a championship.”

"Sebring is a bear of a race, and it’s a track and a type that makes its own rules, and you just roll with it."

Patrick Long, Driver, No. 16 Wright Motorsports Porsche 911 GT3 R.
“I feel charged up and super proud to be heading into this finale as one of the contenders for the title. Sebring is a bear of a race, and it’s a track and a type that makes its own rules, and you just roll with it. I am focused on continuing to aim for victories, remaining honed-in on our process and bringing as much preparation to the weekend as any car in the race. Thank you to 1st Phorm and Mountain Motorsports for allowing us the chance to line up Saturday with a shot at this!”

Ryan Hardwick, Driver, No. 16 Wright Motorsports Porsche 911 GT3 R.
“It all comes down to this one race! One shot at winning the IMSA GTD championship! Our entire team has worked extremely hard to get us in this position, to be able fight for the championship in the final event of the season. John Wright has guided our team with the mantra that consistency wins championships, and our consistent finishes are exactly what has us in this position. But now we have a different focus. Our collective goal is to win the 12 Hours of Sebring! If we do that, then we have a great shot at the championship. Personally, I thrive when it all comes down to one race; one shot to win it all. That’s exactly how I’ve won two other world championships in my racing career, and it’s also what I’m most looking forward to about the opportunity we have at Sebring. We have one shot, and that one shot is all we are going to need.”

Jan Heylen, Driver, No. 16 Wright Motorsports Porsche 911 GT3 R.
“Nothing is more exciting than going into the last race of the season fighting for the championship! I’m really happy to be a part of this team and doing my little part. We have all the ingredients to do the best job out there: car, team, drivers. I can’t wait to get the race started at this iconic racetrack.”

The Mobil 1 Twelve Hours of Sebring weekend will bring to a close the long and successful history of the IMSA Porsche GT3 Cup Challenge USA by Yokohama. Founded in 2004 and running its first full season in 2005, the one-make championship has held its place as the stepping stone from club racing to professional racing ever since. Many of the top drivers and teams in this weekend’s 12-hour IMSA WeatherTech SportsCar Championship event got their start battling wheel-to-wheel in identical Porsche 911 GT3 Cup race cars, building legends… 45-minutes at a time.

Both young aspiring drivers and veteran semi-pros have found a home in the IMSA Porsche GT3 Cup Challenge USA, which uses the iconic Porsche 911 GT3 Cup car as the sole type of race machine allowed to compete. Action takes place in both Platinum and Gold classes, with a Masters Championship for drivers 45 years old and over also within the Platinum category. Each weekend traditionally includes a pair of 45-minute races. However, to complete the championship, a third race has been added at several venues to make-up for lost events during the 2020 season. Sebring will enjoy two races, both scheduled for Friday, November 13. Qualifying will be held on Thursday. The 15-minute time trial will lock the grid for Race 1 based on the fastest lap while the field for Race 2 is set based on a driver’s second quickest time or the fastest Race 1 lap should it be quicker than qualifying.

The current generation 911 GT3 Cup car houses a normally aspirated four-liter, flax six-cylinder engine with direct fuel injection delivering a peak performance of 485 hp. It is the most powerful vehicle in the history of the Porsche one-make cup series.

All race cars are technically identical, as are the Yokohama racing slick tires and the fuel. The Porsche 911 GT3 Cup car (the second generation of the type 991) has been fielded in the Porsche GT3 Cup Challenge USA since 2017 and comprises the Platinum class. The current generation 911 GT3 Cup car houses a normally aspirated four-liter, flax six-cylinder engine with direct fuel injection delivering a peak performance of 485 hp. It is the most powerful vehicle in the history of the Porsche one-make cup series. Following its bigger siblings, the 911 GT3 Cup car produces just under the 500+ hp of the 911 GT3 R and 515+ hp Porsche 911 RSR-19.

The 2020 championship battle comes to its conclusion centered on two of the sports brightest young stars: Jeff Kingsley (Canada) and Riley Dickinson (New Braunfels, Texas). Kingsley moved into the defending championship-winning No. 16 Kelly-Moss Road & Race Porsche 911 GT3 Cup car and picked up right where 2019 champ Roman DeAngelis left off. DeAngelis is now racing in the WeatherTech series. Dickinson, the 2020 IMSA Hurley Haywood Scholarship winner has been challenging the Canadian every step of the way and has regularly reversed the roles with the Texan taking the top step of the podium.

Each driver wants to go down in history as the last driver to win the IMSA Porsche GT3 Cup Challenge USA by Yokohama championship. In the same way, 20+ contenders are chomping at the bit to get behind the wheel of the new Porsche 911 GT3 Cup race car and call themselves the first champion of the Porsche Carrera Cup North America in 2021. Excitingly, that first 45-minute race in Carrera Cup North America will take place at Sebring in March of next year.

Porsche Carrera Cup North America will take its place as the premier one-make race series in the United States and Canada and will utilize a combination of the latest yet-to-be-unveiled Porsche 911 GT3 Cup race car and Michelin Pilot Sport Cup N3 racing slick to challenge the best road and street race courses on the continent. As with all national Carrera Cups worldwide, Porsche, through Porsche Motorsport North America (PMNA), will manage the single-driver per-entry series. IMSA will act as official sanctioning body as well as manage scrutineering and steward on-track activity.

The inaugural season of the championship will host 16-rounds at eight venues in the eastern United States and Canada. Each race will count toward a season-long driver and team championship in each of three classes: Pro, Pro-Am and Rookie. All drivers can contend for Pro class victories but must utilize the newest Porsche 911 GT3 Cup race car to do so. The Pro-Am class is eligible for “Gentlemen” drivers – a driver who does not make a primary profession of automobile racing. A driver in the Pro-Am category may use the newest machine or the previous generation. The Rookie class is only open to drivers who are 23-years-old or younger. All drivers age 23 and under enjoy the additional benefit of inclusion in the Porsche Carrera Cup North America Junior program. As a Junior, drivers receive valuable training tools for those wishing to make a career of professional motorsport. A driver will be selected from the Porsche Carrera Cup North America Junior program to represent the region in the annual Porsche Junior Shootout in Germany at the end of the year.

Falling just under the Porsche Carrera Cup North America in 2021 will be the recently announced Porsche Sprint Challenge North America. The new series, which will utilize previous generations Porsche 911 GT3 Cup race cars and the current generation Porsche 718 Cayman GT4 Clubsport, will take its place as the direct feeder to Carrera Cup. With the Trophy level being eliminated from the Porsche Motorsport Pyramid North America, this championship breaks new ground for Porsche as the German sports car manufacturer has commissioned the United States Auto Club (USAC) to manage all aspects of the 16-race schedule. Yokohama has been selected as the series official tire partner and presenting sponsor of the Porsche Sprint Challenge. The series will debut in Sebring in 2021.

While this weekend’s Porsche GT3 Cup Challenge USA races mark the end of one era, a new one emerges stronger. Sebring will remain a cornerstone event for the Porsche Carrera Cup North America and Porsche one-make series will continue to build legends… 45-minutes at a time.