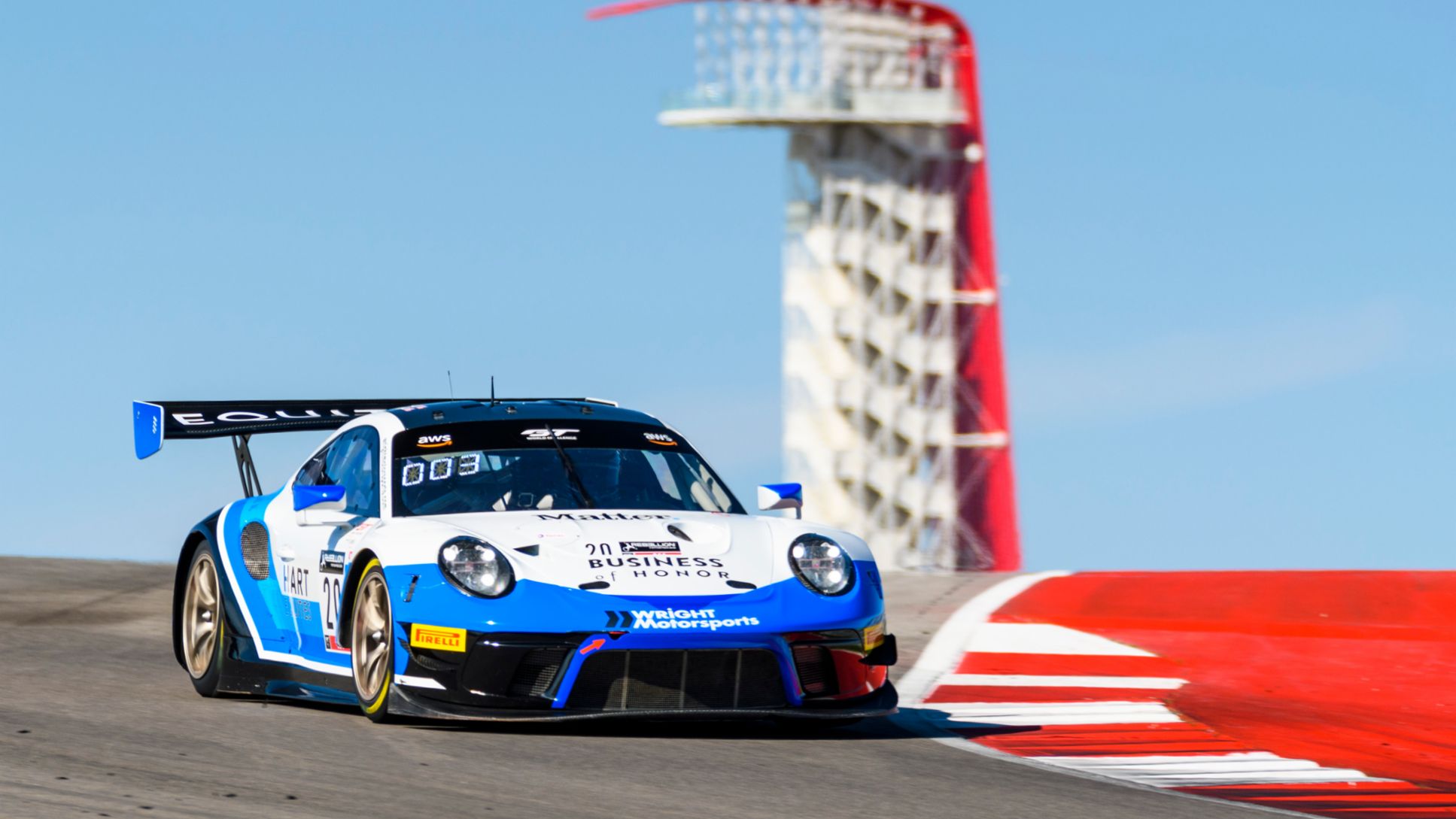 The SRO GT World Challenge America and SRO GT4 America championships launch their 2020 race seasons this weekend in Austin, Texas. 14 road car-based, Porsche-built race cars will challenge in six major events at the Circuit of the Americas (COTA) with customer race programs. Three Porsche 911 GT3 R racers will pursue victory at the 20-turn, 3.426-mile (5.513-km) Grand Prix track outside of the Texas capital city in the GT World Challenge America. Eight Porsche Cayman GT4-based competition machines are entered in the GT4 SprintX races while three more are entered in the GT4 Sprint events. Each series will compete in two races – one Saturday, March 7, the second on Sunday, March 8.

No less than eight of the Porsche race cars make-up the SprintX entry list – the most of any car-make.

The weekend’s headliner is the pair of 90-minute, two-driver, Pro-Am, Am and Silver class GT World Challenge America events. Three Porsche 911 GT3 R race cars are entered in the 14-car field with past series’ champions GMG Racing fielding team principal James Sofronas (Villa Park, California) and veteran Porsche racer Jeroen Bleekemolen (The Netherlands) in the top Pro-Am class, sharing the No. 14 rear-engine machine. Wright Motorsports remains a stalwart of both Porsche and the World Challenge series with the No. 20 of Amateur class drivers Max Root (Rancho Santa Fe, California) and San Antonio-Texas’ Fred Poordad. While both drivers are veterans of the IMSA Porsche GT3 Cup Challenge USA by Yokohama ranks, this weekend’s opening rounds of the SRO series will be the first time either driver will compete in the SRO GT3-spec class. Texas-based Park Place Motorsports will make its return at COTA. The Patrick Lindsey (Santa Barbara, California)-led program enters the No. 73 Porsche 911 GT3 R for Texan David Ducote of Houston and local Al Metni from Austin. Both the Wright and Park Place entries will field their machines in the Am class.

The GT4 America Sprint series is the sole single-driver format officiated by the SRO in North America. All races are 50-minutes for the GT4 category cars with three Porsche-built machines entered. Jason Bell will campaign the No. 2 Porsche 718 Cayman GT4 Clubsport for GMG while Pumpelly looks for the 2020 Sprint Cup title from behind the wheel of the No. 66 TRG 718 Cayman GT4 Clubsport. The lone previous generation Cayman GT4 Clubsport MR in the race is the No. 54 entered by Black Swan for Pappas.

Two test sessions for each will be held on Thursday, March 5 for all series and classes with official practice opening on Friday, March 6. Qualifying and the first race for all three championships will be held on Saturday, March 7 with the second race of the season scheduled for Sunday, March 8.

After previously announcing the purchase of two Porsche 911 GT3 R race cars for the IMSA WeatherTech SportsCar Championship, Wright Motorsports announced its second entry, this one to campaign the 500 hp German race car in the WeatherTech Sprint Cup. Anthony Imperato (Brooklyn, New York), who also races the No. 16 Wright Motorsports 1st Phorm Porsche in the four endurance races on the calendar, will be joined in the No. 91 Henry Repeating Arms Porsche 911 GT3 R with sports car racing veteran Jeroen Bleekemolen (The Netherlands). The first event of the Sprint Cup championship within a championship for races of less than four-hours will be the Grand Prix of Long Beach, April 18.

"The competition will be very hard, but we should be able to fight at the front of the field." Jeroen Bleekemolen

Bleekemolen will bring a wealth of sports car racing experience to the team, holding professional sports car racing wins from all over the world. The 2008 and 2009 Porsche Supercup Champion also holds wins at the 24 Hours of Le Mans as well as other 24-hour events at Nürburgring, Dubai and the Circuit of the Americas. The two-time American Le Mans Series GTC champion, and three-time North American Endurance champion has also clinched wins at iconic events such as the Mobil 1 Twelve Hours of Sebring, Bathurst and Abu Dhabi.

John Wright, Team Principal, Wright Motorsports.
“We’re excited to be getting our second Porsche on track to begin the WeatherTech Sprint Cup championship. Anthony has done a great job in the endurance side of our program, and after Sebring, he’ll now get to run the Sprint events in his own car. Jeroen will be a fantastic addition to the program as our Pro driver, and we expect to be strong contenders for the title.”

Anthony Imperato, Driver, No. 16 Henry Repeating Arms Wright Motorsports Porsche 911 GT3 R.
“I’m looking forward to the IMSA Sprint Cup season with Wright Motorsports in the Henry Repeating Arms Porsche. It’s an awesome opportunity to be driving with Jeroen. He will be a great addition to the team, and I think we will have some success this year. I can’t wait to get started in Long Beach.”

Jeroen Bleekemolen, , Driver, No. 16 Henry Repeating Arms Wright Motorsports Porsche 911 GT3 R.
“It’s great to be able to join Wright Motorsports and Anthony for the IMSA GTD Sprint Cup. I have raced against Wright a lot, so I know just how good the team is. Anthony has been showing great speed and development, it will be nice to work together. I really like the sprint race calendar with some classic track and events. The competition will be very hard, but we should be able to fight at the front of the field. I’m really excited to get started at Long Beach.”

A day after the Marrakesh E-Prix, the TAG Heuer Porsche Formula E Team took part in the official rookie test for the ABB FIA Formula E Championship. Porsche “works” driver Frédéric Makowiecki (France) and Porsche Young Professional/ test and development driver Thomas Preining (Austria) took to the track for the first time in the Porsche 99X Electric on Sunday, March 1. In the two, three-hour sessions, they completed a total of 172 laps on the 1.85-mile (2.971-kilometer) track in Marrakesh, Morocco and provided the team with important insights. In the race on Saturday, Porsche works driver André Lotterer (Germany) finished in eighth-place; Neel Jani (Switzerland) crossed the finish line in 18th-place.

Amiel Lindesay, Head of Operations Formula E.
“We had a productive day of testing and are very pleased with Frédéric (Makowiecki) and Thomas’ (Preining) results. Both drivers gained valuable experience with the Porsche 99X Electric. As a team, we will use the data to prepare for the upcoming races and for car performance. Our thanks go to Frédéric and Thomas for their effort.”

Frédéric Makowiecki, Factory Driver, Porsche Motorsport.
“I learned a great deal at the rookie test. My first impression of the Porsche 99X Electric is very positive. Sitting in a new car for the first time is always a real challenge. You never quite know what’s in store – particularly with the new technology in a fully-electric race series like Formula E, however, I was able to get to grips with the Porsche 99X Electric. I made really good use of the laps on the challenging track here in Marrakesh for the team and for myself.”

Thomas Preining, Young Professional/Test and Development Driver, Porsche Motorsport.
“The test drives with the Porsche 99X Electric were a lot of fun. Personally, I was able to learn a great deal about the specific characteristics of the car. The data will help the team further optimize the performance of the Porsche 99X Electric for future races, so it was a win for us all. I’m already looking forward to further tests with the car.”

The TAG Heuer Porsche Formula E Team has achieved another top-ten finish in Marrakesh, Morocco. In the fifth race of the 2019/2020 ABB FIA Formula E Championship, Porsche works driver André Lotterer (Germany) crossed the finish line in eighth-place. He had started the race from third-position. In the second Porsche 99X Electric, Neel Jani (Switzerland) took the checkered flag at the Marrakesh E-Prix in 18th-place.

Lotterer dropped back to fourth-place on the opening lap, before returning to third in the opening phase thanks to a penalty imposed on the driver ahead of him. He fell back a further two places as the race progressed, before briefly battling up to fourth. However, Lotterer slipped back to eighth-position in the closing minutes. Jani experienced a largely uneventful race and improved five positions from 23rd on the grid.

For the second time since his pole position in Mexico two weeks ago, Lotterer made it to the Super Pole in qualifying for the TAG Heuer Porsche Formula E Team. In the competition for the six fastest drivers, he posted a time of one-minute-17.253-seconds to secure third-place on the grid.

After five out of 13 races, Lotterer now has 25 points and is twelfth in the drivers’ standings for the ABB FIA Formula E Championship. The TAG Heuer Porsche Formula E Team is ninth in the team championship, with the same number of points.

Amiel Lindesay, Head of Operations Formula E.
“Our car was once again very strong in qualifying and the first half of the race went well too. Towards the end of the race, we had saved less energy than the cars around us which is why André (Lotterer) lost ground during the final two laps. We will take another look at that and analyze it carefully. Our aim for the future is to convert the strong qualifying performance into consistently good race results.”

André Lotterer, Driver, No. 36 TAG Heuer Porsche Formula E Team Porsche 99X Electric.
“Of course, we're happy to score these points in Marrakesh. Having started from third, we’d have liked to have finished better, but the second half of the race was not easy. Nonetheless, we were still able to learn a lot. We will draw the right conclusions from our experiences today.”

Neel Jani, Driver, No. 18 TAG Heuer Porsche Formula E Team Porsche 99X Electric.
“During the previous races, our pace was good, but we were unable to record the results we had aimed for. This time, it was difficult for me from the start. I did not feel right on the brakes at all during the day. We will examine that in detail. We still have plenty of races ahead of us. We will continue to work intensively and improve.”