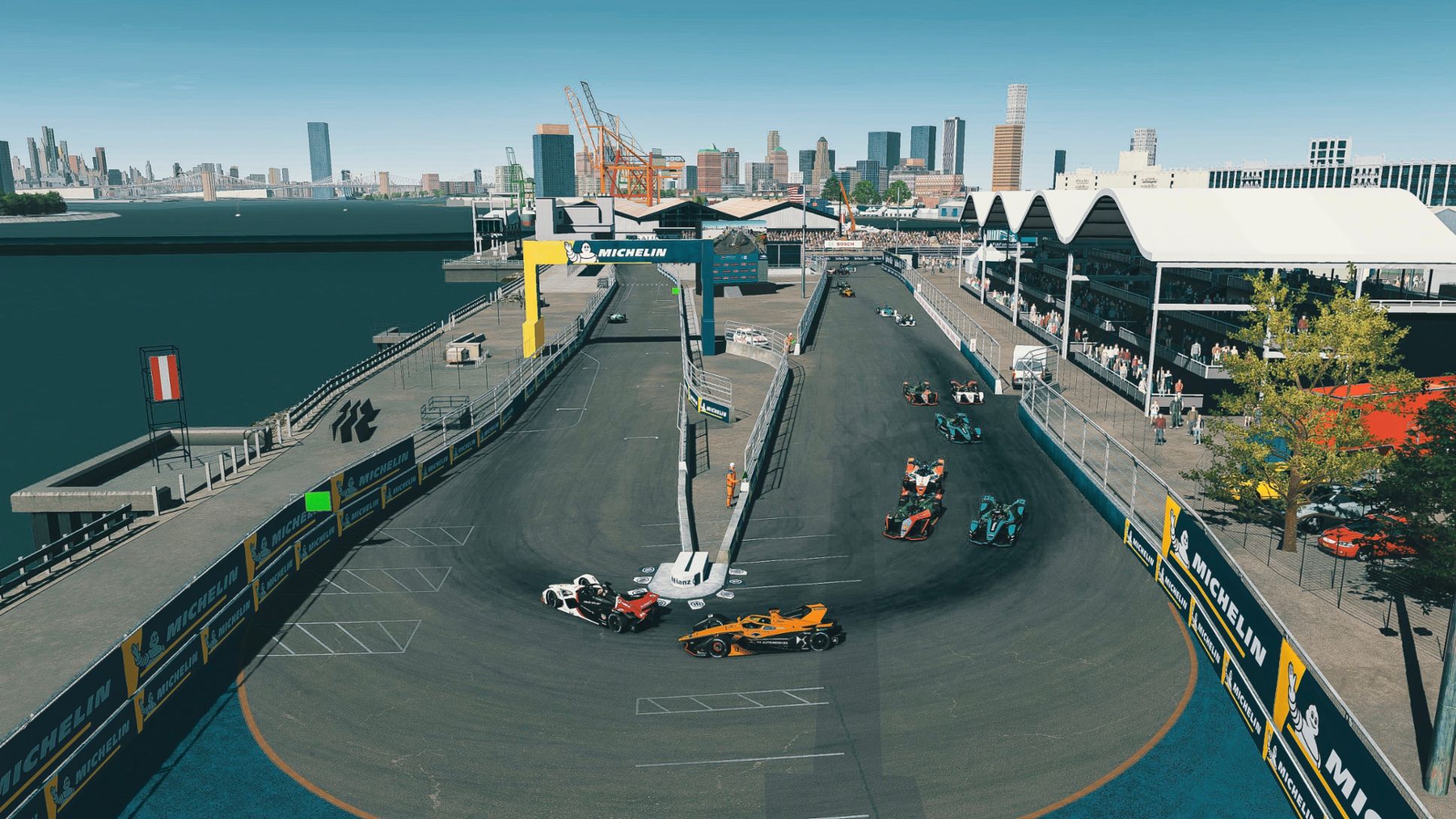 The TAG Heuer Porsche Formula E Team added more points to its tally in the maiden race on the virtual Formula E circuit in New York, New York on Saturday, May 30. Porsche factory driver Neel Jani (Switzerland) was involved in the battle for a spot on the podium for long periods during the sixth race of the ABB Formula E “Race at Home Challenge” before crossing the finishing line in fifth-place. His teammate André Lotterer (Germany) claimed tenth-place in the second virtual Porsche 99X Electric. In the “Challenge Grid” race for sim racers and influencers, which takes place separately, Joshua Rogers (Australia) secured a third-place, celebrating a podium finish in his third appearance of the season for Porsche.

The virtual race in New York’s Brooklyn neighborhood provided plenty of Formula E action. After a strong performance in qualifying, Jani started the race from third on the grid and moved up one position in the first turn. He was on course for a podium finish before a tumultuous final phase. The Swiss driver lost two places on the 11th lap and, after he spun in the final lap, he had to let another competitor pass. Jani then crossed the line in fifth-place. Lotterer also made a good start from tenth-place, moving up one position. However, he slipped back again as the race progressed, finishing where he started. These results saw Jani (10 points) and Lotterer (1 point) score a total of 11 points for the TAG Heuer Porsche Formula E Team. The grand finale of the “Race at Home Challenge”, featuring two competitive races, is scheduled to take place next weekend. Double points will be up for grabs in both of these final races. Race 1 on Saturday, June 6, will be held on the virtual track in New York while the Grand Finale will take place in Berlin-Tempelhof on Sunday, June 7.

Marco Ujhasi, Manager Esports at Porsche Motorsport.
“We saw some thrilling battles at the sixth round of the ‘Race at Home Challenge’ today. Neel and André were both in the points again on the new virtual circuit in New York. Neel was doing pretty well after recording the third-fastest lap time in qualifying but was not quite able to convert this into the same race result, finishing fifth. Qualifying did not go quite so well for André, but he finished tenth to score another point. Josh put on a great chasing performance in the ‘Challenge Grid’ race and moved up six places. He was rewarded for this with a spot on the podium. It is great that Formula E managed to secure another new race location for the virtual Formula E series with this circuit in New York. We are looking forward to next weekend with New York and Berlin as the venues for the Grand Finale.”

Neel Jani, Driver, No. 18 TAG Heuer Porsche Formula E Team Porsche 99X Electric.
“I am very happy with qualifying and I had a good start to the race. Things were then very tight in turn one. I got wedged in, but I still managed to move up to second. I then just concentrated on my race where I showed a good pace. It was a tough battle for the podium. Unfortunately, I spun on the final lap and dropped down to fifth-place. That was a shame, as I hadn’t been so close to a podium finish before that. Nonetheless, we scored some valuable points and overall we are confident heading into the final weekend of the season.”

André Lotterer, Driver, No. 36 TAG Heuer Porsche Formula E Team Porsche 99X Electric.
“Qualifying did not go so well, although the lap times in practice actually weren't bad. Once the race started, the going got tough on the first lap. However, I did get through that alright. There was some damage to my car in a battle with Oliver Turvey. In the end, I finished tenth. We could have done better but at least I had a thrilling battle with Oliver.”

Joshua Rogers, Driver, Challenge Race, No. 18 TAG Heuer Porsche Formula E Team Porsche 99X Electric.
“That was an exciting race in New York. I found qualifying difficult. I made a few errors, which meant that I started the race in ninth-place. The start went well though. Some drivers took the inside line on turn one. I went outside and was able to move up a few places – because there were some collisions. I was already up to fifth after turn two and continued to move up. I had a nice battle with Cem Bolukbasi and managed to get past in the end. Improving from ninth to third - that’s a great result. Once again, it was great fun for me to be involved for the TAG Heuer Porsche Formula E Team.”