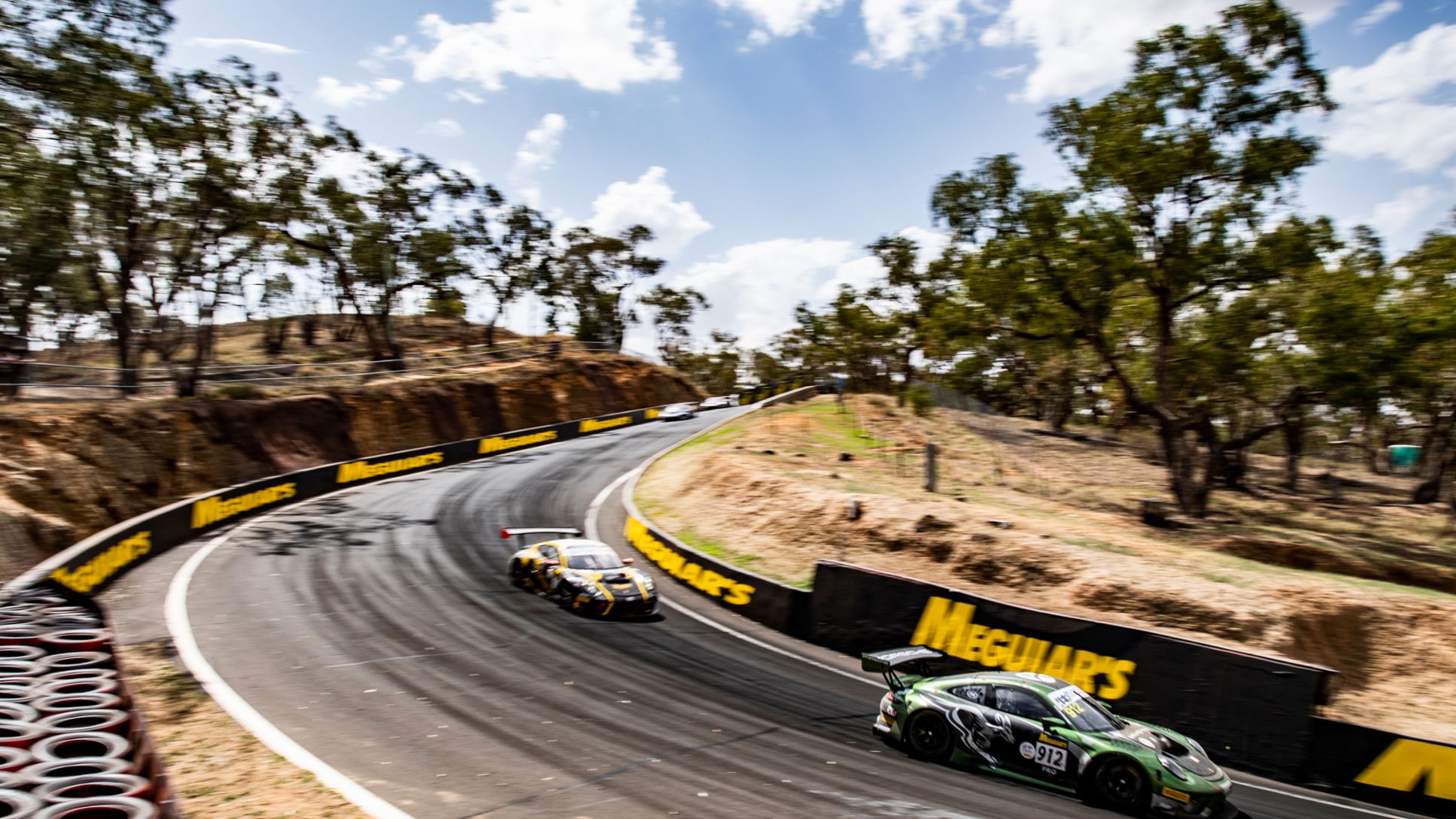 Despite the record-setting race distance achieved and extended green flag runs, several safety car phases turned the long-distance classic on the picturesque Mount Panorama Circuit into a turbulent race. Last year’s winner Campbell started the race on his home turf from pole position. Deep into the race, the Porsche 911 GT3 R ran amongst the leading pack. However, tire damage on lap 117 relegated the No. 911 down a lap. Thanks to a clever pit stop strategy, the team was able to make up lost ground during a safety car phase. In the end, the gap to the podium was a mere 1.529 seconds after 314 laps on the 3.861-mile, 23-turn track that winds its way to the top of the mountain and back down.

The second GT3-spec race car run by Absolute Racing, No. 912, took the checkered flag in seventh-place. Porsche Young Professional Thomas Preining (Australia) shared the rear-engine racer with Porsche “works” driver Dirk Werner (Germany) and Matteo Cairoli (Italy). Porsche works driver Laurens Vanthoor crossed the finish line two positions behind them. The Belgian was joined in the cockpit of the No. 1 car fielded by EBM (Earl Bamber Motorsport) by his IMSA works driver teammate Earl Bamber (New Zealand) and the Australian motor racing legend Craig Lowndes. At the start of the race, the squad fought for the front spots, however a time-consuming change of the brake pads prevented them from achieving a top result.

Round two of the Intercontinental GT Challenge is scheduled for the Spa-Francorchamps Circuit in Belgium. The legendary 24-hour race in the Ardennes region will take place July 25 – 26.

Fritz Enzinger, Vice President Porsche Motorsport and Group Motorsport Volkswagen AG.
“Grove Racing’s victory in the Pro-Am class is really great. All five of our Porsche 911 GT3 R finished in the top eleven. After claiming pole position, we thought we could possibly win. But the field was very evenly matched. As the group representative for Volkswagen Motorsport, I’m of course delighted with Bentley’s win.”

Pascal Zurlinden, Director Factory Motorsport.
“It wasn’t a great race in the pro-category. We had problems with the tires and brakes. But the drivers and teams fought their way through and made the best of the situation. As such, everyone can go home with their heads held high. For our long-standing customer team Grove Racing, I’m absolutely thrilled about their huge success in the Pro-Am class.”

Sebastian Golz, Project Manager Porsche 911 GT3 R.
“We have five cars in the top eleven, a class win and a second-place in the Pro-Am category. All in all, that result doesn’t sound too bad, but we just didn’t quite pull it all together against the competition today. Because of the (tire) punctures, brake problems and penalties we couldn’t make the most of the potential that was available to us.”

“Starting in the night at Bathurst is something special." Dirk Werner, Driver, No. 912 Absolute Racing Porsche 911 GT3 R

Mathieu Jaminet, Driver, No. 911 Absolute Racing Porsche 911 GT3 R.
“All things considered, it was a tough race for us. We had two punctures that threw us back. We lost a lap but we battled hard to get back up into the action. Towards the end we hoped for the predicted rain, but unfortunately it arrived only after the checkered flag came out.”

Earl Bamber, Driver, No. 1 Earl Bamber Motorsports Porsche 911 GT3 R.
“We had a good car with an ideal setup, but unfortunately there was a problem with the brake pads in the middle of the race. We had to pit and that cost us two laps. We couldn’t recover from that. Afterwards we had one of the fastest cars, which showed our potential, but after our win here last year we had simply expected more.”

Dirk Werner, Driver, No. 912 Absolute Racing Porsche 911 GT3 R.
“Starting in the night at Bathurst is something special. However, starting from twelfth on the grid surrounded by so many vehicles makes it difficult to gain any positions at the start. We managed to work our way up the field and were in the top group for the last two hours. At the end we hoped for rain, perhaps then we might have achieved an even better result.”

Stephen Grove, Driver, No. 4 Grove Racing Porsche 911 GT3 R.
“First place in the Pro-Am class is fantastic. Ben’s first stint was very important because it put us in a good position. We then fought our way through the field bit by bit. The secret here is that you have to be able to read the traffic on the track correctly. We tried to stay out of trouble and are grateful for a perfect car.”

Steffen Höllwarth, Porsche Motorsport Head of Operations for the IMSA Championship, welcomed the birth of his son, Anton, the week following the Rolex 24 At Daytona. Höllwarth, who oversaw the record-extending performance of the Porsche factory team in the GTLM class during the 2019 Championship season, announced both mother and son are healthy and doing well.

Porsche factory driver Patrick Long has built a reputation on the racetrack as one of sports car racing’s quickest and most racecraft-savvy pilots. In recent years, beyond his work in professional motorsport representing Porsche, the resident of Manhattan Beach, California has become synonymous with historic Porsche road and race cars as well. His dedication to the sport’s history, specifically that of the German marque, has earned him the distinction and honor of being asked to participate on the selection committee for the 2020 Rolex Monterey Motorsports Reunion, to be held August 13 – 16 at WeatherTech Raceway Laguna Seca in Monterey, California. North America’s only Porsche “works” driver is one of only 11 committee members that will choose from hundreds of deserving vintage and historic race cars the honor of competing in the event that has become a cornerstone of the annual Monterey Car Week on the California peninsula.

The position is not honorary as Long, who is celebrating his 17th year as a Porsche factory driver, has become an authority on historic race cars. The two-time 24 Hours of Le Mans-winner co-founded Luftgekühlt, a “car culture event” focused on air-cooled Porsche road and race cars that has expanded from his native California to events on both coasts of the United States and sites around the world. Long’s attention to detail as a driver and collector has expanded the knowledge base of Porsche cars to the industry as a whole. The current lead driver for Wright Motorsports in the IMSA WeatherTech SportsCar Championship, where he races the No. 16 Porsche 911 GT3 R, has held a similar position to this new role for the last two Porsche Rennsport Reunions – each held at WeatherTech Raceway. Additionally, he is a “go-to” driver for historic race teams who seek his expertise to compete in multiple classes at similar events around the world behind the wheel of legendary Porsche machines.

Patrick Long, Porsche Factory Driver.
“It’s a big honor for me to be asked to sit on the selection committee for the Monterey Motorsports Reunion. Just looking at who else is on the committee is sobering enough but when you consider the quality and range of cars we will be asked to choose from it becomes pretty overwhelming. I am very humbled and take this job very seriously. There is lots to learn and soak up, but I am very dedicated to the future of historic motorsport.”

The motorsport world lost one of its most versatile and personable drivers on January 30 with the passing of John Andretti. A part of the legendary Andretti family, the second-generation driver was son of Aldo, nephew of Mario and cousin of Michael and Jeff. John Andretti is well known for his diversity behind the wheel including stints in premier Porsche programs including one year as a Porsche factory driver in the company’s Indy car effort (1990) and racing customer Porsche prototypes during the GTP era of IMSA.

Andretti famously won twice in the gold Miller High Life Porsche 962 prepared by Busby Racing. The first of the two wins in the car’s final season came with Derek Bell (Great Britain) and Bob Wollek (France) at the Rolex 24 At Daytona. It was the last Daytona victory for the classic Porsche race car. Andretti and Wollek went on to win a second, and final, race with the Busby 962 in Palm Beach, Florida. In 1990, Andretti was hired to join the Porsche North America factory team to campaign the radical Porsche-March 90P in the final year of the German marque’s participation in the IndyCar Series. He finished the season as the highest-ranked of the two Porsche entries with a pair of fifth-place finishes (Cleveland and Vancouver).

In addition to his Porsche victories, Andretti was a regular in both NASCAR – taking two wins in the Cup Series – and Indy car racing – winning once – and had a brief but successful stint as an NHRA Top Fuel Dragster driver. He was a 12-time starter in the Indianapolis 500 with a best finish of fifth-place in 1991. On his list of accomplishments, Andretti used his experience in both the Indy car and stock car garage area to become the first driver to run the Indianapolis 500 and Coca-Cola 600 (Charlotte, North Carolina) on the same day in 1994.

Diagnosed with colon cancer in 2017, the native of Indianapolis, Indiana, became very public in his battle against the disease encouraging all to be tested for the cancer. He was deemed cancer-free by the end of 2017 following intense treatments but relapsed in 2019. Andretti was 56-years-old.

Alwin Springer, Porsche Motorsport Consultant / Founding President/CEO, Porsche Motorsport North America.
“I was deeply saddened to hear the news of John passing away. Yes, we had a very good and successful working relationship but more importantly I will remember John the person. He was a very genuine and real man and he will be very much missed in the sport but also by me personally. While we have not worked together for over 30-years, we always stayed in touch and exchanged Christmas cards every year. The thoughts and prayers of my family go out to his wife Nancy and his children: Jarrett, Olivia and Amelia. We grieve beside you but also celebrate John’s life with you.” 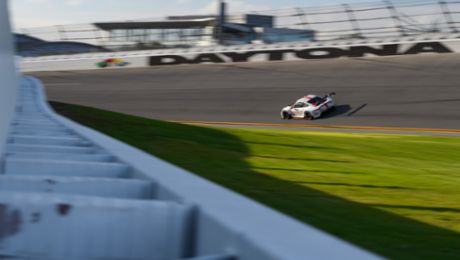