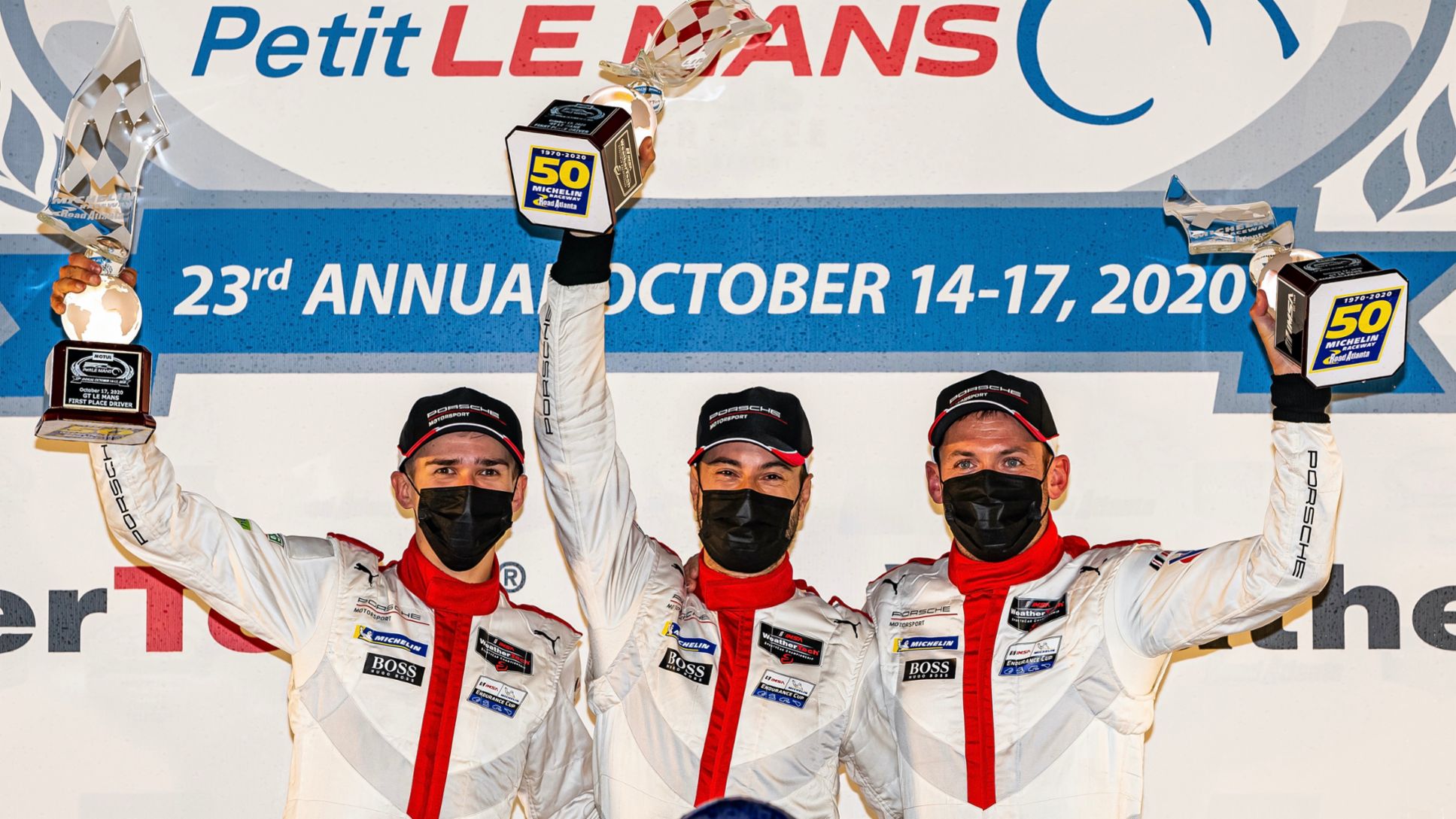 Porsche has continued a longstanding winning streak and extended an event record by winning the 23rd running of the Petit Le Mans. By virtue of the No. 911 Porsche GT Team Porsche 911 RSR crossing the finish line at Michelin Raceway Road Atlanta at the head of the GTLM field on Saturday, October 17, Porsche maintains its streak of winning at least one IMSA sports car race event every season for well over 30-years. In addition, with the victory by Porsche factory drivers Nick Tandy (Great Britain), Frédéric Makowiecki (France) and Matt Campbell (Australia), the German sports car maker has extended it manufacturer record to 24 class wins – including one overall win – at the 10-hour endurance race. The victory helps strengthen the “works” program’s position in the IMSA WeatherTech SportsCar Championship’s Michelin Endurance Cup point standings as well.

The trio of factory drivers won the ten-hour race at the historic track northeast of Atlanta, Georgia by a narrow 1.779 seconds. The second Porsche 911 RSR, driven by Laurens Vanthoor (Belgium), Earl Bamber (New Zealand) and Mathieu Jaminet (France), became entangled in an accident in the turbulent final phase and reached the finish line in fifth-place. After nine of eleven races, Porsche ranks third in the GTLM manufacturers’ championship.

Due to the yellow flag segments, the frontrunners in the GTLM class never lost sight of each other over the entire Petit Le Mans distance – which covered an impressive 1,094.74-miles in ten-hours. Throughout most of the event, the competitors lapped the 2.54-mile (4.088-kilometer) natural terrain road course separated by just a few seconds. Depending on the individual pit-stop cycle, the lead changed multiple times. The No. 912, with 2019 class champion Vanthoor behind the wheel, turned the fastest lap of all GTLM teams. The race ended under a yellow flag slowing the pace and progress in the last 15-minutes.

In the equally hotly contested GTD class for customer teams, the seven fastest GT3-spec vehicles were within one lap at the checkered flag. The Porsche 911 GT3 R fielded by privateer Wright Motorsports and driven by “works” driver Patrick Long (Manhattan Beach, California), Ryan Hardwick (Atlanta, Georgia) and Jan Heylen (Belgium), took the flag in fourth-place. The final caution stopped Heylen’s frenzied push to overtake third-place. Directly behind Wright in fifth-place was the 500 hp Porsche 911 GT3 R campaigned by the Pfaff Motorsports. The No. 9 “Plaid Porsche” of the Canadian Porsche dealer returned to the series for the first time since the season-opening Rolex 24 at Daytona. The Canadian-based car was shared by Porsche development driver Lars Kern (Germany), Norwegian Dennis Olsen and 2019 IMSA WeatherTech Sprint Cup champion Zacharie Robichon (Canada).

The next and penultimate round of the IMSA WeatherTech SportsCar Championship will be contested on November 1, 2020, at WeatherTech Raceway Laguna Seca in Monterey, California. It will be the last “sprint” race of the season at two-hours and 40-minutes

Pascal Zurlinden (Director Factory Motorsport): “What a fantastic result for the team. We’ve suffered many setbacks during this IMSA season. This victory at ‘Petit Le Mans’ is the reward for all the hard work that everyone in the team has done. That includes both the team here in the USA and our Weissach squad.”

Steffen Höllwarth (Head of Operations IMSA Championship): “The monkey’s finally off our back. Those were some tough and intense ten hours with ups and downs. We had to deal with some minor setbacks, but we didn’t let it ruffle our feathers and were in the right place at the right time in the end. I’m thrilled for the boys. Unfortunately, in the fight for GTLM victory, the number 912 car was involved in an accident while lapping a GTD vehicle, otherwise we could have brought home an even better result. Still, a huge compliment to the whole team. Today we benefited from the necessary racing luck several times, which has evaded us in the past. We’re happy with this victory and we’re looking forward to the last two races of the season.”

Frédéric Makowiecki, Driver, No. 911 Porsche GT Team Porsche 911 RSR: “That result was totally unexpected. Normally in such a race, we wouldn’t have been in a position to fight for the GTLM victory, but we were in the right place at the right time. This is a very special moment for me. I’ve already won Petit Le Mans with Nick [2018]. This time Matt was part of our team and he did a great job. We attacked over the entire distance, and we couldn’t have driven even a tenth of a second faster.”

Back to the Streets. Porsche GT3 Cup Challenge USA Returns to St. Pete.

When the COVID-19 pandemic struck, IMSA Porsche GT3 Cup Challenge USA by Yokohama was in St. Petersburg, Florida preparing for the one-make championship’s first race of the season. However, race organizers closed down the event at the recommendation of state and local authorities seeking to mitigate the spread of the virus. On October 23 – 25, the series, which exclusively utilizes the Porsche 911 GT3 Cup race car for all competitors, will have a second chance. A 17-car field will challenge in two, 45-minute races on the 1.8-mile, 14-turn temporary course laid out on the city streets of the Florida metropolis.

With only four races remaining in the season, the Platinum title contenders have become clear. Current points leader Jeff Kingsley (Canada) tightened his grip on the cup with two wins at Road Atlanta in the No. 16 Kelly-Moss Road & Race Porsche 911 GT3 Cup. However, 2020 IMSA Hurley Haywood Scholarship recipient Riley Dickinson (New Braunfels, Texas) refuses to roll over without a fight having scored one win in Atlanta driving the No. 53 Moorespeed Porsche 911 GT3 Cup. Practice and qualifying for St. Petersburg get underway on Friday, October 23 with Race 1 at 1:55 p.m. ET on Saturday. Race 2 will take the green flag on Sunday, October 25 at 12:40 p.m. local time.

Team Hardpoint and Earl Bamber Motorsport have launched a joint venture, with the two organizations combining resources to conduct a multi-car customer program in the Porsche Carrera Cup North America championship beginning with the 2021 season. Earl and Will Bamber – owners of Earl Bamber Motorsport – and Team Hardpoint principal Rob Ferriol made the announcement on Friday, October 16 becoming the first team to officially announce their involvement in the inaugural season of the Porsche Carrera Cup North America.

The team will be based at Team Hardpoint's recently announced headquarters located in the Motorsports Technology Park at VIRginia International Raceway, where it will focus on providing the tools, technology, and fundamentals to develop new and existing drivers into well-rounded competitors.

"This is a tremendous opportunity to combine resources in a first-class way. Not only has Earl Bamber Motorsport proven itself as a regular contender in Carrera Cup Asia, but the philosophy we share on motorsport, business and how to deliver real value to drivers is what makes this a truly powerful combination."

Earl Bamber Motorsport is a world class customer racing team, basing itself in the Asian region. EBM was founded by racing brothers Earl and Will Bamber, taking their own on-track experience and success into their own organization. Since its inception, the team has rapidly expanded, achieving championship victories at all levels it has participated in, including the highest levels of global GT racing.

The 2021 Porsche Carrera Cup North America is scheduled to make its debut March 17-20, 2021 at Sebring International Raceway for the opening of the 16-race schedule. The series will utilize a combination of the latest yet-to-be-unveiled Porsche 911 GT3 Cup race car and Michelin Pilot Sport Cup N3 racing slicks to challenge the best road and street race courses on the continent.

The team is also in conversation regarding participation in other Porsche one-make categories in North America.

Dr. Daniel Armbruster, president and CEO, Porsche Motorsport North America.
"When we first conceived the Porsche Carrera Cup North America, we imagined it drawing the best teams and best young drivers. However, we never dreamed that the first team to officially announce their participation in the inaugural season would be the magnitude of Team Hardpoint and Earl Bamber Motorsport. This is beyond our expectation for the first year. We are excited to have a combination as strong as Rob, Earl and Will at the leading edge of the series. I believe the participation of Team Hardpoint and Earl Bamber Motorsport proves the concept and value of Porsche Carrera Cup North America. We welcome them to championship."

Earl Bamber, Team Principal, Earl Bamber Motorsport.
"It's a great day and huge new step for our team to venture into North American racing. Porsche provides one of the best single-make platforms for teams and drivers and being able to take our business around the world shows that. To join forces with Rob in North America is a perfect alliance to hit the ground running in the 2021 Carrera Cup Series in North America."

Rob Ferriol, Principal, Team Hardpoint.
"This is a tremendous opportunity to combine resources in a first-class way. Not only has Earl Bamber Motorsport proven itself as a regular contender in Carrera Cup Asia, but the philosophy we share on motorsport, business and how to deliver real value to drivers is what makes this a truly powerful combination. IMSA Porsche GT3 Cup Challenge was instrumental in my start as a driver, and the new Porsche Carrera Cup North America is going to elevate the single-make series to an even higher standard. This is a natural fit for both our organizations, and a great way for us to enter the championship.

It is important to me that, while we'll certainly push hard to run up front every weekend, we focus on making this venture a place where drivers have the resources to grow and improv. I'd love nothing more than to someday be co-driving with – or even racing for the win against - an alumnus of our program."

Will Bamber, Team Principal, Earl Bamber Motorsport.
"To finally announce our North American future is incredible. Expanding our relationship with Porsche globally is very exciting and it has been a pleasure to work with and develop a friendship with Rob. The foundations are there now with our new facility, equipment and car preparation well underway. We're excited to tackle this new championship in America alongside Rob and the team at Hardpoint."