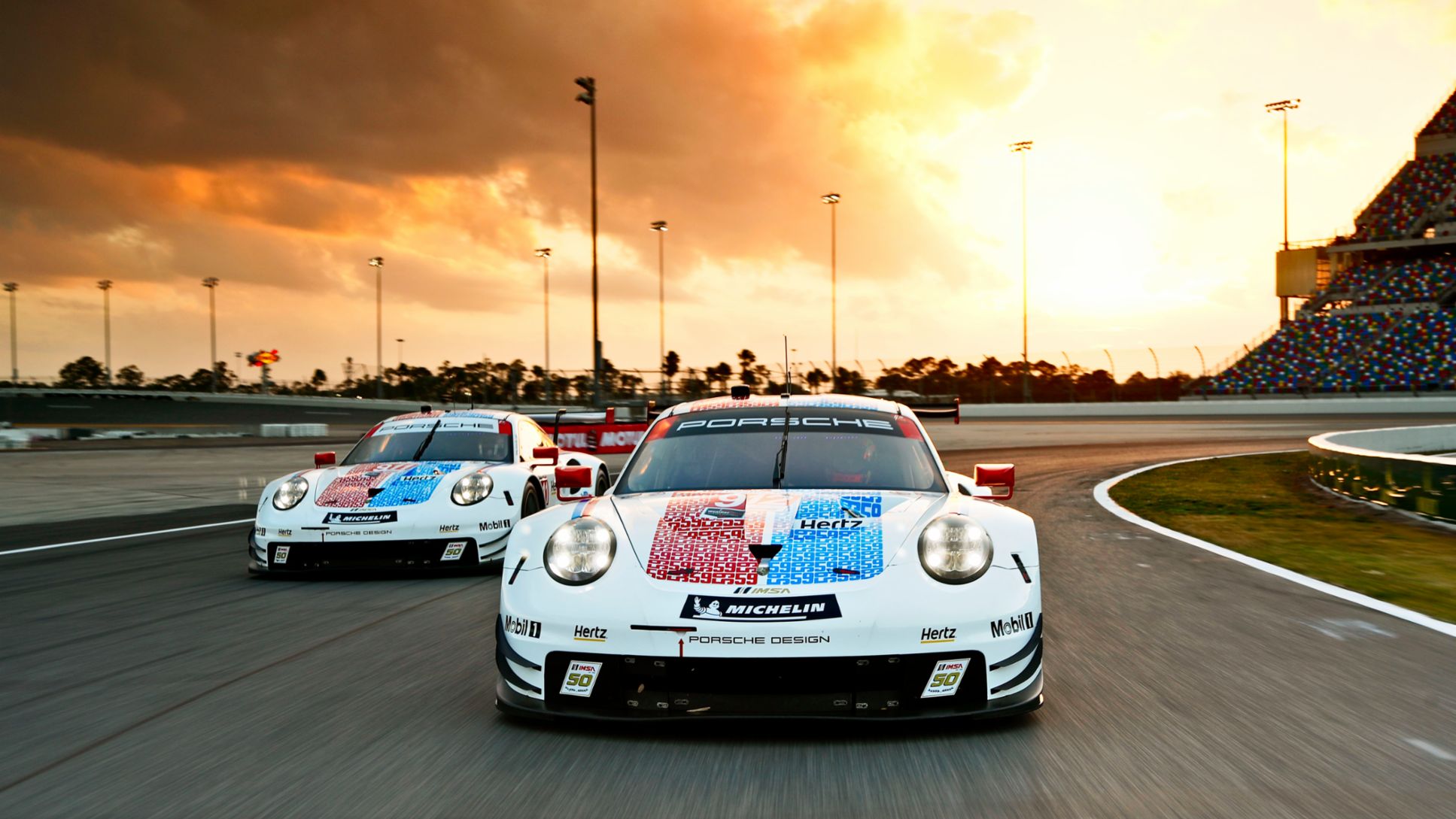 2019 marked the 50th anniversary of the International Motor Sport Association (IMSA). It is appropriate that Porsche, the only manufacturer to participate in every IMSA sports car race, played a significant role in the celebratory season. Both on track and off, the German marque set itself apart as a leader in the world of Motorsport. The “works” team and customer programs added eight class victories and six class championships to Porsche’s unrivaled record of IMSA accomplishments. Off the track, the factory team generated unprecedented interest with two retro-liveries to help commemorate IMSA’s Golden Anniversary.

Unpacking the twin Porsche 911 RSR race cars for the Rolex 24 At Daytona, no one was aware that Porsche would follow-up the vastly popular throwback liveries of 2018 with the red, white and blue commemorative colors of Brumos Racing. The surprise unveiling the morning of the first practice session reverberated through the racing community. The Nos. 911 and 912 carried the colors made famous by the Jacksonville, Florida-based team in the first two rounds of the WeatherTech Championship, including at Daytona International Speedway as well as for the 67th edition of the Mobil 1 Twelve Hours of Sebring in March. The blue and red stripes running from nose-to-tail were easily spotted from a distance but, upon closer examination, revealed the solid stripes were actually a grid of the number 59. The “sweeps” down the sides drew directly from the team’s historic livery. Porsche pilots Patrick Pilet and Nick Tandy would share the No. 911 for the entire season and be joined for the endurance races by Frédéric Makowiecki. Earl Bamber and Laurens Vanthoor would drive the No. 912 with Mathieu Jaminet as the enduro specialist. The Brumos colors would become discolored by 24-hours of racing, much of which would come off during intense rainstorms. Ultimately, the No. 912 would cross the finish line in third-place – the first of a streak of Porsche podiums that would not end until the penultimate round of the season. The No. 911 would take the checkered flag in fifth-place.

The 12 Hours of Sebring would see the Brumos colors remain and the fortunes of Porsche improve. Pilet/Tandy/Makowiecki overcame the brutal bumps of Sebring International Raceway to take a strong victory from the class pole position in the No. 911. Bamber/Vanthoor/Jaminet qualified on the outside of Row One with the No. 912 but would finish in fifth-place. The Porsche car count in GTD dropped back to the full-season runners with Park Place (Long/Lindsey/Boulle) finishing in sixth-place while Pfaff continued its learning curve taking tenth with Hargrove, Robichon and Kern.

With the “36-Hours of Florida” complete, the Porsche works team returned to the corporate colors of red, white and black. The shortest race on the schedule at one-hour and 40-minutes, the Grand Prix of Long Beach proved to be the coronation of #BamThor. Again starting on the outside of the front row next to teammates Pilet and Tandy, Earl Bamber and Laurens Vanthoor made their first mark on the 2019 season by capturing the class win on the city street course. The No. 911 would finish in fifth-place.

Long Beach would start a five-race class-winning streak for the Porsche GT Team. The No. 912 returned to victory lane in the next round at the Mid-Ohio Sports Car Course. The pairing of Bamber and Vanthoor had won at Mid-Ohio in 2018 as well and the performance on the Lexington, Ohio natural terrain circuit helped spark what would become the No. 912’s championship run. The No. 911 also took a podium spot, finishing in third-place, in the first “standard” length – two-hours, 40-minute – race of the season. The Porsche GT Team now had a three-race win streak and convincing lead in the championship. At least one Porsche 911 RSR had been on the GTLM podium at every race to-date.

With no GTD at Long Beach, Mid-Ohio was round three for the class. Park Place inched closer to the podium with Long/Seefried taking fourth-place. Pfaff raced near the front with Hargrove/Robichon before settling for tenth-place.

While the factory teams traveled to Le Mans to prepare for the 24-hour classic, GTD programs took on the Raceway at Belle Isle Park in Detroit. It was here that Robichon made his most significant strategic move to capture the Drivers’ title in the WeatherTech Sprint Cup championship for races less than six hours. With Pfaff sitting out the one-hour, 40-minute race on the temporary street course, Robichon was paired with Patrick Long in the No. 73 Park Place Porsche 911 GT3 R. The combination of the 2018 Porsche GT3 Cup Challenge Canada champion and veteran American factory driver was formidable. Robichon had an impressive second-place qualifying run to place the car near the front. Long held onto second to help propel the young Canadian into Sprint Cup contention.

Following Le Mans, the Porsche GT Team continued the season with the Six Hours of The Glen. Despite the break in the IMSA schedule, the team returned without missing a step. Back in the Brumos colors for the next two rounds, the homecoming saw the No. 911 in victory lane at Watkins Glen International with Pilet/Tandy. The win continued the string of podiums to five and consecutive victories to four. Bamber/Vanthoor came home in sixth-place. In GTD, three 911 GT3 R made the race with Black Swan finishing in tenth with Werner, Seefried and Marc Miller. They trailed the sixth-place Porsche of Pfaff (Robichon/Hargrove/Kern) but outran the No. 73 Park Place car of Long/Lindsey/Boulle in thirteenth.

As the 50th season moved into its second-half at Canadian Tire Motorsport Park (CTMP), the factory team continued with a fifth victory in a row. The No. 912 remained on top taking the win with the No. 911 in third-place. Park Place led the Porsche customers with Long/Lindsey earning another fourth-place, one spot ahead of Robichon/Hargrove in the Pfaff machine.

Lime Rock Park in Connecticut followed CTMP. With only GTLM and GTD competing, the shortest track on the schedule offered Porsche its first chance for an overall win of the season. The No. 912 came close but the class-record five-race win streak ended with a second-place finish. The No. 911 finished in fourth-place. Pfaff Motorsports gave Porsche the first IMSA win for the new 911 GT3 R at Lime Rock. The class win was also a first for Pfaff, Robichon and Dennis Olsen. Park Place ran fourth with Long and Seefried while Wright Motorsports returned for its first IMSA race of the year with Matt Campbell joining Anthony Imperato in the No. 91. They finished in fifth-place.

The longest track on the IMSA schedule, Road America, followed. However, the Wisconsin road course did not see the Porsche GT Team in victory lane. The No. 912 continued the string of podium finishes with a third-place result while a seventh-place finish frustrated the No. 911. Three Porsche ran in the GTD class with Pfaff earning its second victory with Robichon and Matt Campbell. The Wright machine – now with Imperato teamed with Olsen – was eighth when the checkered flag fell followed by Park Place (Long/Lindsey) in fifteenth.

VIRginia International Raceway (VIR) was the final opportunity of the year for an overall victory and the Porsche GT Team did not fail. Pilet and Tandy charged from deep in the field to take the sixth Porsche win of the season. However, they gained little ground in the championship on their team car as “BamThor” finished in second-place for a Porsche one-two result. Pfaff was just short of the GTD podium with a fourth-place for Hargrove/Robichon while Park Place’s Long/Lindsey raced to fifth-place.

The penultimate round of the season was frustrating for Porsche. Unable to come to terms with the tricky WeatherTech Raceway Laguna Seca, the podium streak ended when the No. 911 finished in eighth-place, the No. 912 in seventh. The Monterey, California-track goes into history as the only IMSA facility at which the Porsche 911 RSR (MY 2017) never won. However, in GTD, Robichon made history as the first driver to win the WeatherTech Sprint Cup Championship. A fourth-place finish in the No. 9 with co-driver Hargrove gave Robichon the Drivers’ title and Porsche the Manufacturer hardware. Monterey would be the end of the season for Park Place when a qualifying accident damaged their car beyond immediate repair.

The 22nd Running of the Petit Le Mans offered a grand stage for IMSA to closeout its 50th year and Porsche to celebrate at its North America headquarters. Prior to the event, Porsche unveiled a partnership with Coca-Cola and an accompanying historic livery with a modern flare. The red and white “wave” of Coke on the sleek 911 was a massive fan favorite. With Jaminet as the third driver, a finish of fifth-place was enough for Bamber and Vanthoor to capture the Drivers’ Championship. Pilet/Tandy – joined again by Makowiecki – finished in sixth-place, a result strong enough to give them second-place in the standings. All told, Porsche took the Team and Manufacturer Championships as well as first and second in the Front Runner Championship. A late race charge by Robichon/Hargrove/Kern moved Pfaff Motorsports into third-place in GTD at the checkered flag at Michelin Raceway Road Atlanta to close out the year. In addition to the Sprint Cup title, Robichon was third in the GTD Drivers’ Championship while Pfaff earned third-place in the Team standings.

2019 marked the final season of factory competition for this generation of Porsche 911 RSR. The car – first introduced in 2017 – added six IMSA WeatherTech SportsCar Championship GTLM class victories to its CV this season, bringing its career record to ten wins.

At round five of the IMSA WeatherTech SportsCar Championship in Watkins Glen, a late caution phase prevented Wright Motorsports from securing a well-deserved podium spot. 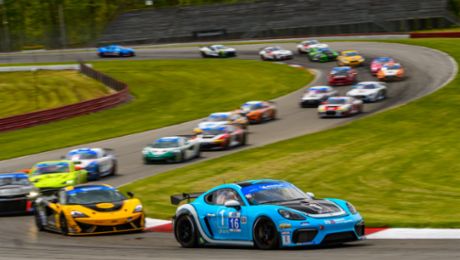