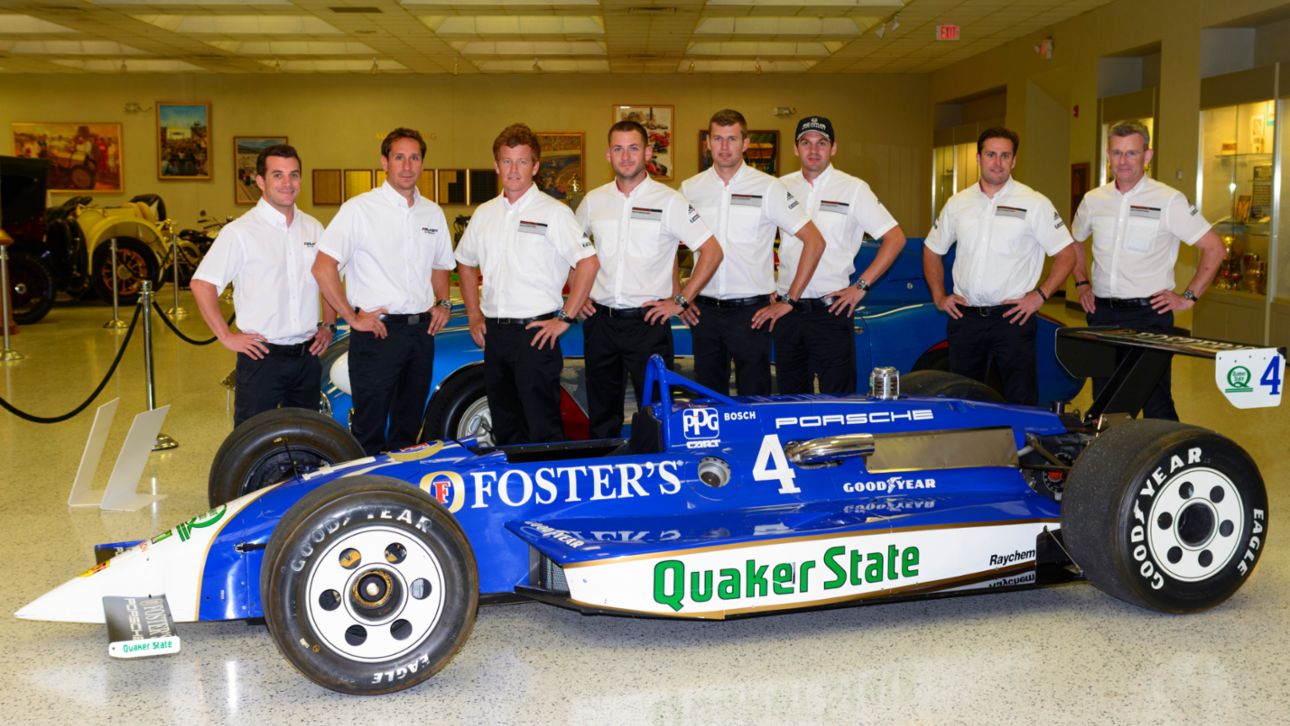 Sunday, May 24, 2020 was scheduled to be the 104th start of the Indianapolis 500. While the world-famous event at “The Brickyard” has been postponed to August 24 due to concerns to contain the Coronavirus pandemic, the Memorial Day holiday is universally linked to the running of the “Greatest Spectacle in Racing”. While Porsche is most commonly associated to the events of its greatest successes: the 24 Hours of Le Mans (19 overall wins – manufacturer record), Rolex 24 at Daytona (22 overall wins – manufacturer record) and Mobil 1 Twelve Hours of Sebring (18 overall wins – manufacturer record) for example, the German sports car maker has a tradition at “The Speedway” as well. The open wheel cars of Porsche would never have the good fortune on the 2.5-mile oval the brand enjoys at other iconic race courses, the marque’s presence left behind multiple innovations still used in the Indy car racing today.

Though privateer entries had utilized non-sanctioned engines as early as 1966, Porsche did not take a serious look at American open wheel racing until the late 1970s when it developed an Indy car engine to compete in the Indianapolis 500 and the CART PPG Indy Car World Series. In 1979, Porsche teamed with 1963 Indy 500-winner Parnelli Jones, sports car racing customer Interscope Racing, and driver Danny Ongais for a conceived 1980 effort to win Indianapolis. Pairing an Interscope IR01 chassis to a factory race engine based on the Porsche 935 powerplant, the team showed promise early in testing. However, officials from the United States Auto Club (USAC) – the sanctioning body of the Indianapolis 500 at the time – lowered the turbocharger boost for the engine, immediately making the car uncompetitive. Porsche withdrew before it ever turned a wheel in competition.

It was nearly ten years later when Porsche finally made its official debut at Indianapolis. In 1987, Porsche launched its second attempt in Indy car racing. Fielding a factory team in the CART race at WeatherTech Raceway Laguna Seca with Al Unser, Sr. driving and Porsche motorsport legend Al Holbert managing, both the turbocharged 2.65-liter V8 engine and chassis (type 2708) were built in Weissach, Germany. The car would qualify 21st but finish 24th when a water pump failure ended the car’s debut after seven laps. The car did not attempt to qualify at Indianapolis having entered late in the 1987 season.

The following May, foreseeing issues with its chassis, Porsche switched to the March 88P (‘P’ for Porsche) race car. Italian Teo Fabi – 1983 pole sitter at Indianapolis – was named as driver of the No. 8 Quaker State March earning the effort’s best finish of the season, a fourth-place, at Nazareth. The effort would finish 10th in season points. In May 1988, Fabi qualified the Porsche-March 88P 17th on the grid and finished in 28th-place. The greatest setback in the marque’s Indy effort would not come on track but with the sudden death of the program’s guiding light, Al Holbert, in a private plane crash on September 30, 1988.

In its second year of running a March (now designated the March 89P), the efforts initiated by Holbert gave Porsche its best Indy car season overall, earning two pole positions (Portland and Mid-Ohio), and winning the brand’s only Indy car race to date at the Mid-Ohio Sports Car Course with Fabi at the wheel. The program also had its best oval track finish, a second-place at Michigan International Speedway. Struggles at Indianapolis continued however with a 30th-place finish for Fabi after qualifying 13th.

In 1990, Porsche entered its final season of Indy car racing with the innovative March 90P chassis and its first two-car team – Fabi (No. 4 Foster’s Beer/Quaker State March-Porsche) and John Andretti (No. 41 Foster’s Beer March-Porsche). Fabi would earn Porsche its third Indy car pole position on the street circuit in Denver and a podium finish (third-place) at the Meadowlands circuit. The Italian would finish 14th in the final standings. Andretti would have his best result of fifth-place twice (Cleveland and Vancouver) and finish tenth in points. At Indianapolis, Fabi would finish 18th from a 23rd starting spot while Andretti qualified 10th and finished 21st.

When sports car racing came to the “Circle City” in 2000, the traditional Porsche 911 GT3 Cup race car met with a great deal more success on the Indianapolis road course. From 2000-2006, Porsche Mobil 1 Supercup traveled from Europe to support the United States Grand Prix. Racing twice during the Formula One weekends, the support series was a launching pad for many great Porsche driving careers. Jörg Bergmeister won twice (2000, 2001) while Sascha Maassen claimed the second 2001 victory. Alex Davison won in 2002. The most successful Supercup driver at Indianapolis was Wolf Henzler who claimed four victories in three years (2002, 2003 and twice in 2004). Porsche Supercup also provided several famous “guest” drivers an opportunity to compete including Travis Pastrana and Indianapolis 500 winners Mario Andretti and Al Unser Jr.

When F1 left the Indy road course, Porsche left with it until GT racing returned in 2012 for the Brickyard Grand Prix. The GRAND AM Rolex Series race was won by Magnus Racing’s Porsche 911 GT3 Cup racer that year against heated competition that included fellow Porsche customer teams Brumos Racing and TRG. 2014 marked the return of an official factory effort when the Porsche GT Team’s Porsche 911 RSR took works drivers Patrick Long (Manhattan Beach, California) and Michael Christensen (Denmark) to a third-place GTLM class finish. It would be the sole appearance of the IMSA WeatherTech SportsCar Championship at The Brickyard.