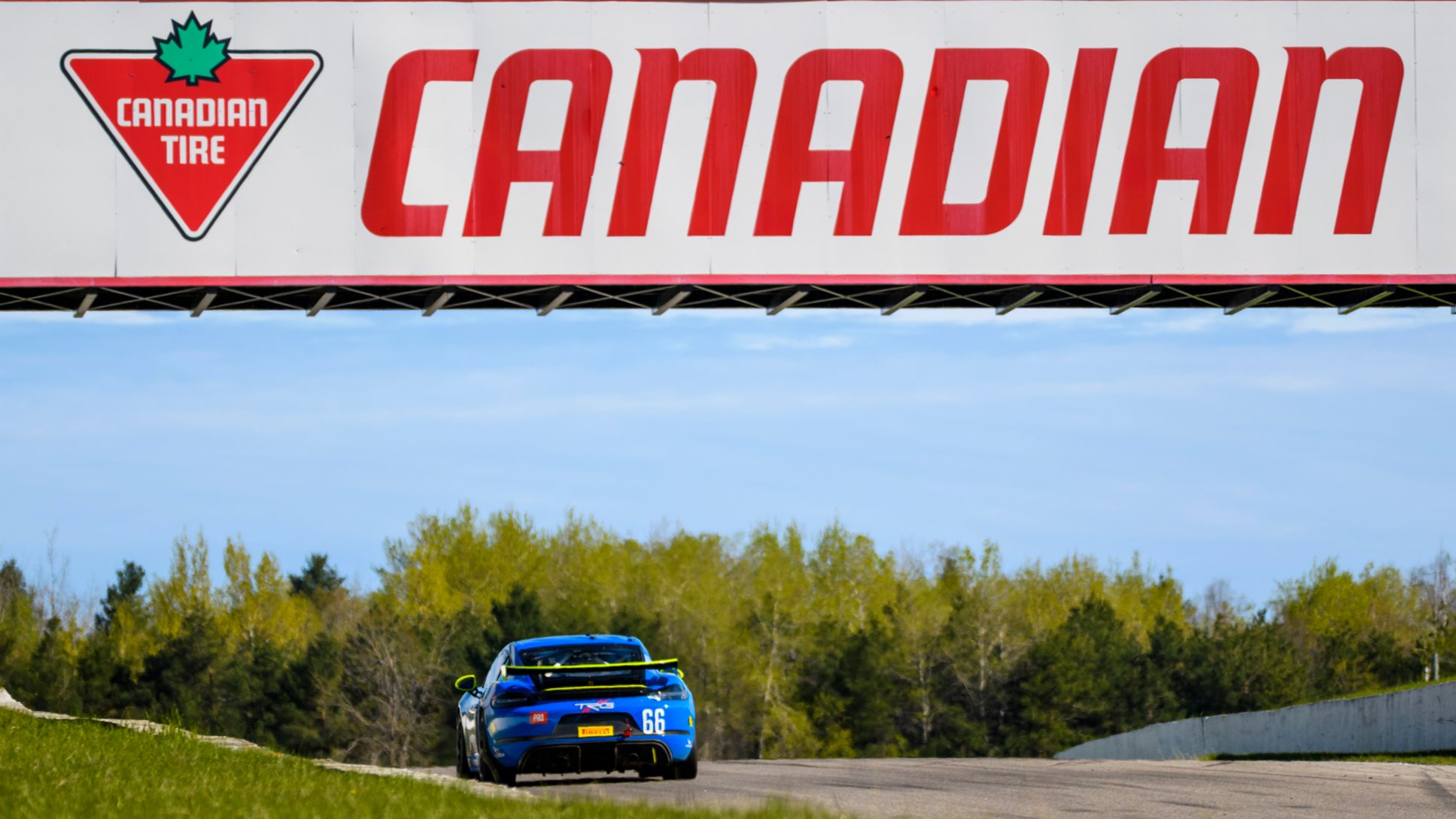 The 2019 IMSA Porsche GT3 Cup Challenge Canada by Yokohama opened its season at Canadian Tire Motorsport Park (CTMP) with a unique winner in each of the two 45-minute races. The large Victoria Day crowd at the Bowmanville, Ontario, Canada track saw young Jeff Kingsley better his Canadian countryman Parker Thompson in the first of the two 45-minute races on Saturday. On Sunday, Roman De Angelis earned a Canadian victory to go with the three races he has already won in the IMSA Porsche GT3 Cup Challenge USA by Yokohama this season.

With several drivers and teams competing in both the Canadian and USA Championships, the battles often rage on both sides of the border. Outright competitors in one title chase are teammates in the other, adding additional drama to the entry-level series that uses the road-car based Porsche 911 GT3 Cup as its lone race car. Such was the case in both races on the fast 2.459-mile circuit north of Toronto.

The Ontario-native is pulling double duty this year between GT3 Cup Challenge Canada and its USA counterpart – Porsche GT3 Cup Challenge USA by Yokohama – but had previously only scored a best finish of fourth in both series. Saturday’s breakthrough for his first pole position and first win proved Kingsley will be one to watch in both Platinum classes throughout the season.

After starting at the back of the pack the Race 1, De Angelis finished the weekend at the front, winning Race 2 on Sunday. In the No. 79 Mark Motors Racing Porsche 911 GT3 Cup car, De Angelis started in third-place on the grid and quickly jumped to second at the start of the race, chasing Kingsley’s Porsche.

While De Angelis was in pursuit of Kingsley, a caution in the first 15 minutes of the race bunched the field together. Shortly after the restart, De Angelis made a move on the inside of Kingsley approaching the Andretti Straightaway to claim the lead with 25-minutes remaining.

With a fourth-place finish on Saturday and the win on Sunday, De Angelis holds a narrow one-point lead in the Porsche GT3 Cup Challenge Canada championship over Parker Thompson in the No. 3 SCB Racing Porsche, 63-62.

Rounds 3 and 4 of the 2019 Porsche GT3 Cup Challenge Canada by Yokohama season will take place at the Canadian Grand Prix in Montreal featuring Formula 1 on June 7 – 9.

"I knew we had the car to make the move, but it’s really difficult to pass here. It’s a really difficult track. It’s fast and flowing, not a lot of heavy braking zones, so you can’t just tuck the nose in there and brake a little bit deeper than the other guy." Roman De Angelis, Driver, No.79 Mark Motors

Jeff Kingsley, Driver, No. 16 Policaro Motorsport Porsche 911 GT3 Cup. On Race 1.
“We got a good start, got the big jump, then with some lapped traffic, he [Parker Thompson] started to close the gap. Towards the end, he was really putting the pressure down. We’re teammates down in The States so we know each other a little bit, but he stayed clean and so did I and ultimately came away with a win.

It was a lot of pressure, mentally and physically, I’m exhausted right now, so I’m looking forward to celebrating this one with the guys and the Policaro Motorsport car was unbelievable today.”

Roman De Angelis, Driver, No. 79 Mark Motors Racing Porsche 911 GT3 Cup. On Race 2.
“I knew we had the car to make the move, but it’s really difficult to pass here. It’s a really difficult track. It’s fast and flowing, not a lot of heavy braking zones, so you can’t just tuck the nose in there and brake a little bit deeper than the other guy. We really took advantage of that restart. The car was awesome as always. We showed that we had the pace yesterday and we put it to show again.”

In the second SRO GT4 America race of the weekend, longtime Porsche customer team TRG scored a victory from pole position at CTMP. Atlanta, Georgia’s Spencer Pumpelly led the 50-minute race from the start in the No. 66 TRG Porsche 718 Cayman GT4 Clubsport to strengthen his position in the road-car based series. The win came in similar style to Pumpelly’s performance at Long Beach, California – another pole to checkered flag run. The No. 66 finished in second-place in Race 1 at the 2.459-mile track.

NOLASPORT also scored a victory in the mid-engine Porsche. Matt Travis and Jason Hart drove the No. 47 Porsche 718 Cayman GT4 Clubsport to the Race 1 win in the Pirelli GT4 America SprintX event on Friday. The Pro-Am class team took the victory in the 60-minute, two-driver format race from the third starting position setting the fastest race lap in the process. Saturday’s second race would not reap similar results for the No. 47. They would set the fastest race lap but finish fifth in-class.

The weekend was taxing for the higher horsepower Porsche customer teams in the SRO Blancpain GT World Challenge America series. Four Porsche 911 GT3 R came to CTMP, two each entered by Alegra Motorsports and Wright Motorsports. Both the No. 22 Alegra machine shared by Daniel Morad and Michael De Quesada and the No. 24 Alegra car of Wolf Henzler and Marco Holzer compete in the Pro class. The No. 58 Pfaff Automotive/Porsche Consulting Wright Motorsports race car of Patrick Long and Scott Hargrove also races in the Pro category while the No. 91 Wright-prepared 911 GT3 R of Anthony Imperato and Dennis Olsen races in the Pro-Am category.

It was an all Porsche front row on the grid for Race 1 when Porsche factory driver Long bested Henzler for pole position. The Californian took off to an early lead but was forced to stop for a tire change. While he, and then Porsche Selected Driver Hargrove fought back from the extra pit stop to finish in sixth-position, the result was a frustrating end to the first race of the weekend for the number 58 team. It was equally frustrating for their team car who also got off to a strong start, setting the fastest race lap in the No. 91 and holding the lead when it also had to make an extra stop for a tire change dropping from the Pro-Am class lead and finishing in sixth-place. The fastest lap set by the No. 91 Wright machine would stand as the best lap turned in a race throughout the weekend.

The Alegra Motorsports Porsche racers would finish in fourth and fifth-place in Race 1. Morad set a staggering pace during his stint in the No. 22 before handing the ride over to  De Quesada. The Porsche Young Driver Academy graduate maintained the quick pace of the Alegra machine before getting pushed out of the way deep in the going of Race 1. He would cross the finish line in fourth-place. The Henzler/Holzer car took the checkered flag just behind in fifth-place with the No. 24.

The No. 91 Wright car earned the sole podium of the weekend for the Porsche 911 GT3 R with a Pro-Am class third-place – tenth overall – in Sunday’s 90-minute event. The No. 58 was fourth-overall with Long and Hargrove. Henzler and Holzer led the Alegra Motorsports entries in Race 2 with a sixth-place finish in class while Morad/De Quesada crossed the finish line just behind their team car in seventh-place.

The SRO Championships will return to the track June 6 – 9 at Sonoma Raceway in California.

Patrick Long, Driver, No. 58 Wright Motorsports Pfaff Porsche/Porsche Consulting Porsche 911 GT3 R.
"We had a great start to the weekend with the pole position and a dominating opening stint in race one, but unfortunately that all came unraveled. Race two was a mission to survive so we can be proud of a fourth-place. We executed a perfect race, but just didn’t have the pace to run with the front-runners. This is a tight championship, so every position counts at the end of the year. With that, we just have to keep our heads down and keep executing.”

Scott Hargrove, Driver, No. 58 Wright Motorsports Pfaff Porsche/Porsche Consulting Porsche 911 GT3 R.
"We came into the weekend with a good spot in the points and all signs looked like CTMP was going to be good for us. We were strong in practice and obviously, Patrick did a great job in qualifying with the pole position. The race was looking great as well, but in the end, luck wasn’t on our side and we had some tire issues that took us out of contention. On Sunday, we had to think about the big picture and change the setup to keep the tires under us. It’s a frustrating way to race, but Wright Motorsports and all of the drivers did the best we could with it.  I think we can all hold our heads up high, but we’re definitely hungry for more.”

Anthony Imperato, Driver, No. 91 Wright Motorsports Henry Rifles Porsche 911 GT3 R.
“The weekend started off well with a pole position, but unfortunately the rest of the weekend was disappointing with issues in both races. We salvaged a third-place, but will move on and hope for better luck at Sonoma.”

Dennis Olsen, Driver, No. 91 Wright Motorsports Henry Rifles Porsche 911 GT3 R.
“We had a strong weekend and showed great speed, but just didn’t have the luck we needed. We didn’t get the results we wanted, but at the end of the day the whole team at Wright Motorsports and all of the drivers worked hard to diagnose the issues we had. We finished the weekend with a third-place finish, but hope to shake the bad luck off for the next event.”