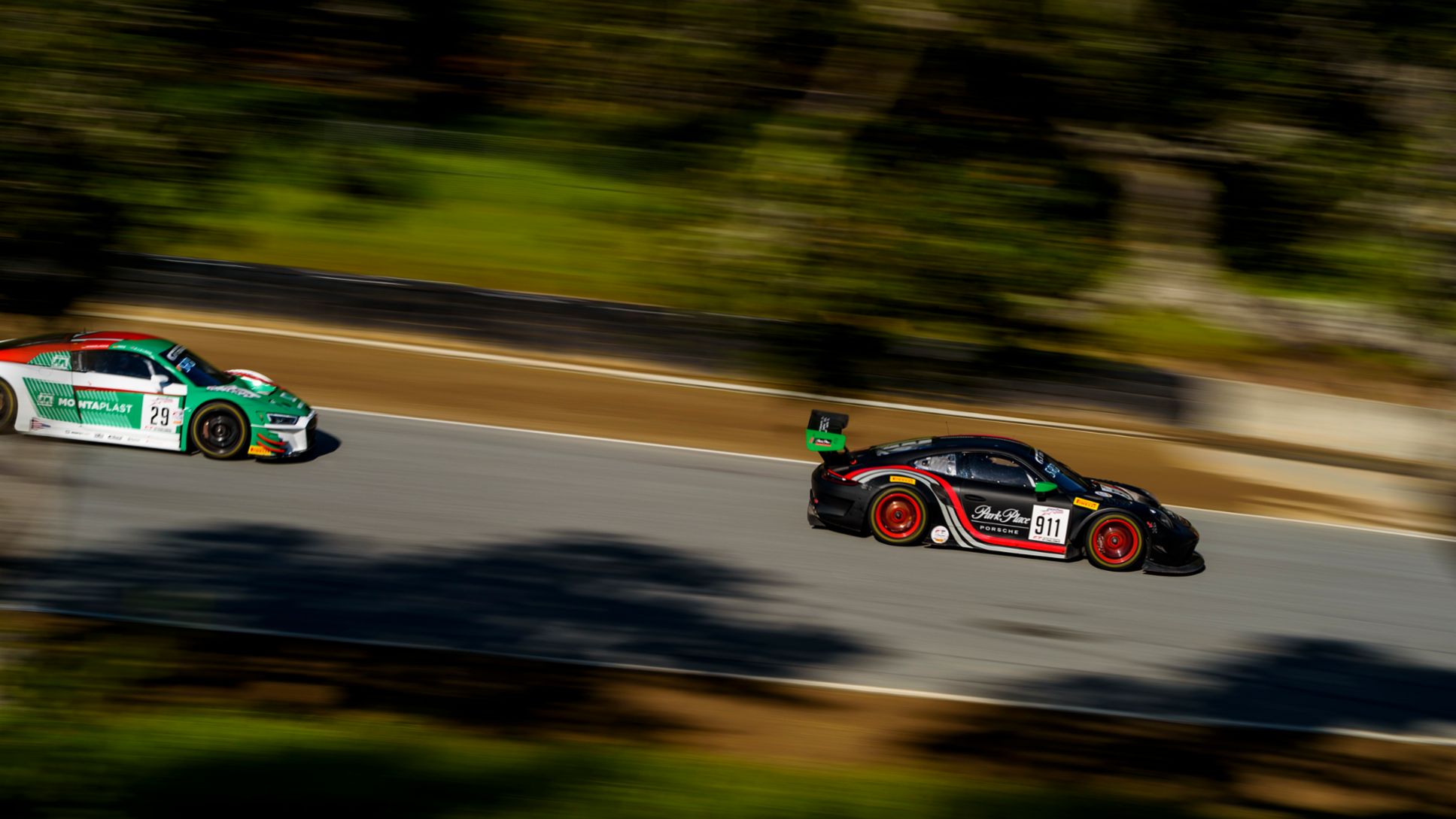 Porsche Profile.
Event Story Lines.
Esports Supercup. Porsche Announces One-Make Virtual World Championship.
Porsche is expanding its one-make motorsport series to include a virtual world championship, the “Porsche Esports Supercup”. The name "Supercup" refers to the highest category of the one-make “Cup” family and underscores the internationality and relevance of the new online race series. The corresponding Porsche one make Cup races have provided a battleground for the best drivers of the Porsche 911 GT3 Cup race car since the debut of the Carrera Cup Germany in 1986. Porsche is organizing the new series with iRacing, the world-leader in online racing competition.

Forty “sim racers”, who have successfully made their way through the global qualifying process, will compete in a series of ten online races – the first being held April 13 on the virtual version of Barber Motorsport Park. The online event coincides with the 2019 season-opening round of the IMSA Porsche GT3 Cup Challenge USA by Yokohama which is competing at the real Birmingham, Alabama-area racetrack. The final race of the inaugural Porsche Esports Supercup will take place on September 28 at the Circuit Monza in Italy. The championship offers a $100,000 prize pool.

Porsche will also recognize the champion of the Porsche Esports Supercup at this year’s “Night of Champions” gala in December. The Porsche Night of Champions honors the successes of both factory and customer teams and drivers racing around the world. This makes Porsche the first major car manufacturer to recognize the achievements of virtual racers at the same event as their real-world racing peers.

IRacing is a leading provider of realistic motorsport simulations operating as an online subscription service since 2004. The race format is designed to provide close competition at every stage of the season. Each online event will have a qualifying session, a sprint race and a main race.

Fritz Enzinger, Vice President Motorsport, Porsche.
“By adding an esports racing competition to our established series of one-make cups, we are extending our footprint in the world of motorsport and allowing sim racers to join the global Porsche Motorsport family.”

Marco Ujhasi, Manager Esports, Porsche Motorsport.
“With the Porsche Esports Supercup, we are launching a global championship that every serious sim racer will strive to win in his career. Only sim racers with a very high skill level have made it through the qualifying process. We are going to witness some very tight races.”

Kjell Gruner, Vice President Marketing, Porsche AG.
“Porsche's heart beats for motorsport. We can share this passion with a much broader audience through esports and create a unique community of esport fans and motorsport fans.”

Over long stretches, the trio driving the No. 911 vehicle entered and prepared by the IMSA WeatherTech SportsCar Championship team owned by Patrick Lindsey (Santa Barbara, California) was on course for a win but fell back to third-place at the checkered flag. The identical car fielded by the customer team Wright Motorsports had also led the race only to retire early with a technical issue. Wright is a regular in the SRO Blancpain GT Challenge America, competing in all three previous runnings of the California 8-Hours race with Porsche.

Facing the GT3 vehicles from seven other manufacturers, the new Porsche 911 GT3 R proved to have the most consistent pace over the distance, however the drivers were unable to fully use this advantage due to the lack of overtaking opportunities. Bad luck struck the winners of the season-opening round in Bathurst. Near the race’s midpoint, Dirk Werner (Germany) pulled into the pits with a gearshift component issue. Until then, the German, who shared the more than 500 hp vehicle with Porsche Young Professionals Matt Campbell (Australia) and Dennis Olsen (Norway), had led the field extensively. The issue forced the No. 912 to retire from the race.

Fritz Enzinger, Vice President Motorsport, Porsche.
“We witnessed a strong debut of the new 911 GT3 R in the Intercontinental GT Challenge. We regard a podium result at its first outing as a success. The team effort of our two American customer squads was impressive. A much larger contingent of Porsche 911 GT3 R will race at the next round; the 24-hour race in Spa-Francorchamps (Belgium). We very much look forward to this classic in the Ardennes.”

Sebastian Golz,  Project Manager 911 GT3 R, Porsche.
“Here again we were in a position to be able to fight for overall victory. Unfortunately, one car retired, and the other had no problems at all. The speed was there, and the teams’ pit stops were excellent. Park Place Motorsports worked perfectly on minimal pit stop times. Both cars displayed an impressive pace over the distance. This makes us very confident for the remaining races.”

Patrick Lindsey, Team Principal, Park Place Motorsports.
“From unloading the vehicles at the track to the checkered flag, our team did a super clean job. The drivers drove an immaculate and impressive race. We absolutely deserve this podium result. The collaboration with Wright Motorsports worked brilliantly. This synergy resulted in two very strong cars in the race. For this reason, I’m very sorry that the number 912 car had to retire early.”

Romain Dumas, Driver, No. 911 Park Place Motorsports Porsche 911 GT3 R.
“A podium spot is really good, but more would have been possible. It was a tough fight over the distance and we weren’t far off a win. This is the first podium result for the new Porsche 911 GT3 R in this fiercely contested series. Now we’ll closely analyze this race and perform even stronger in Spa.”

Mathieu Jaminet, Driver, No. 911 Park Place Motorsports Porsche 911 GT3 R.
“It’s a good result. Still, after many laps at the front of the field, we’d expected a bit more. We had a bit of bad luck with the traffic. Two rivals managed to benefit from this. You can’t do anything about it. After eight hours of racing under green, we were only 20 seconds behind the winners. Everyone in the team can be proud of that.”

John Wright, Team Principal, Wright Motorsports.
“The combination of the two American customer squads Park Place Motorsports and Wright Motorsports worked excellently. The result of this intensive and open cooperation was very obvious in the pace of the two Porsche 911 GT3 R at Laguna Seca. Of course, we’re disappointed that the race ended early for us. We would definitely have had a good chance of winning.”

Matt Campbell, Driver, No. 912 Wright Motorsports Porsche 911 GT3 R.
“It’s really frustrating when you don’t get the just desserts when things had looked so promising. But sometimes this is just how it goes in motorsport. The important thing is that we managed to show how strong we are in the new version of the Porsche 911 GT3 R in the Intercontinental GT Challenge. We want to win the next round in Spa.”

Dirk Werner, Driver, No. 912 Wright Motorsports Porsche 911 GT3 R.“It’s really disappointing. We’d fallen behind at the beginning and had to work our way up through the field. I was leading at the halfway mark when the issue occurred. Our car was very fast, the team worked perfectly. We could have controlled the race from the front, but unfortunately we couldn’t reap the rewards of our good work this time.”