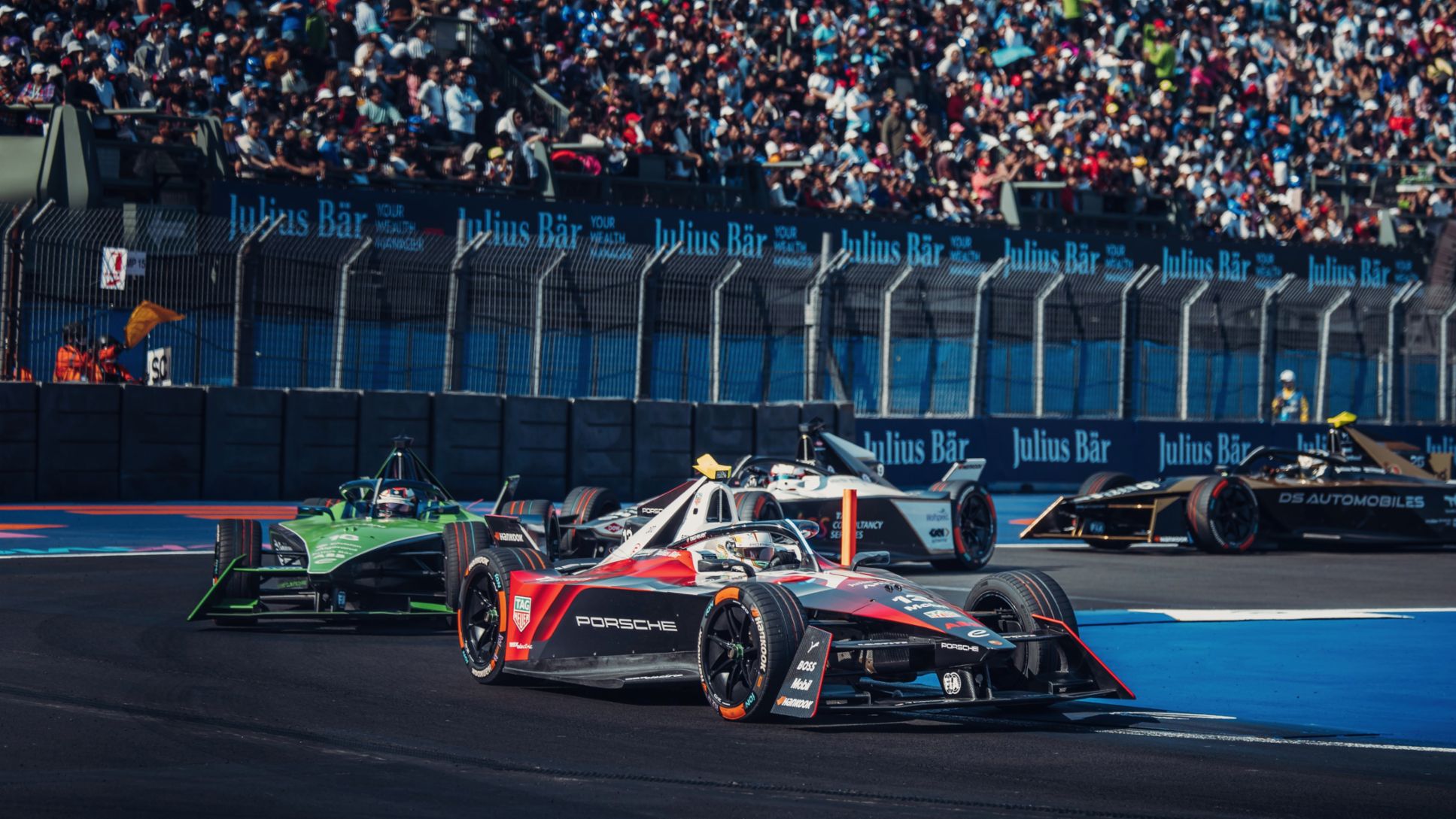 After its outstanding start to the season with the new Porsche 99X Electric Gen3, the TAG Heuer Porsche Formula E Team travels to the Diriyah E-Prix in Saudi Arabia feeling confident. Fans will be treated to two spectacular night races, with rounds two and three of the ABB FIA Formula E World Championship contested on the historic city circuit on January 27 and 28.

The TAG Heuer Porsche Formula E Team fields two of its new Porsche 99X Electric Gen3 on the 2.495-kilometre racetrack not far from the Riyadh capital. In the cockpits are Pascal Wehrlein (GER #94), who kicked off season 9 in Mexico with second place after a strong performance, as well as António Félix da Costa (POR #13). Wehrlein will contest his 50th Formula E race on Friday. Avalanche Andretti also campaigns a pair of Porsche 99X Electric Gen3. The Porsche customer squad owned by the American motor racing icon Michael Andretti won the season-opener in Mexico.

Q&A on the Mexico City E-Prix

What went particularly well for the team in Mexico and what still needs work?

Florian Modlinger: “The team and the Porsche 99X Electric Gen3 experienced a strong start to the season. We secured our first podium result and both cars earned points. The implementation and execution of the race weekend went very smoothly. Our processes worked well. It was a shame that Antonio missed out on the duel stage by just two-thousandths of a second. It’s still early days with the Gen3, so the car still has a lot of potential. We now need to tap this step by step.”

What insights do you take from Mexico to Diriyah and what are your expectations?

Florian: “The performance in Mexico was right. It was extremely close with five cars within a tenth of a second. The night races in Diriyah with completely different track characteristics pose a new challenge. The performance of individual teams might look very different there. We can only be sure of one thing: fractions of seconds can again make all the difference in Diriyah. Our goal is clear: again we don’t want to make any mistakes and again we aim to get the most out of our cars to fight for top results.”

How happy are you with the season opener and what’s your focus for the next races?

Pascal Wehrlein: “We got off to a fantastic start. I’m very pleased with how things went in Mexico. Before the weekend, no one in the team was completely sure how our performance would stack up against the competition. In Mexico, the squad was rewarded for all the effort they put into the new car and into preparing for the season. There’s definitely still a lot more potential to find in the cars as the season progresses and, during this very normal process, we need to make sure that we maintain our top ranking.”

What worked particularly well in the first race with the new Porsche 99X Electric Gen3 and where do you still see potential?

Wehrlein: “The entire race weekend in Mexico ran flawlessly. As a result, the starting setup for our new car was virtually perfect. We just had to make a few tweaks and so were fully competitive from the first free practice. One can also find room for improvement and even more performance in a new car. We learn something every day and I’m sure we’ll succeed in this.”

The season opener in Mexico was your first race for Porsche. How was it?

António Félix da Costa: “It was certainly a strong race and hugely successful for Porsche. For me personally, I’m not 100% happy. It wasn’t my intention to finish seventh. I want to win. Still, it was a great to see how great the package is that we’ve been given this season. Taking these insights from Mexico was hugely motivating and an incentive to keep working hard and raising the benchmark even higher for our rivals. From that perspective, I’m pleased with how the season kicked off but, obviously, I want to do better at the next races.”

How is the teamwork going and what are the special track features at night in Diriyah?

Da Costa: “The most important thing for a racing team is that there’s synergy in all areas. That worked in Mexico and we were rewarded for it. We’ve been learning ever since the new car took its first race laps on the track. And it’s not just since Mexico that we’ve known where our focus should lie. Everyone in the team is highly motivated and ready to pick up in Diriyah where we left off in Mexico. The circuit is demanding and technically difficult. Driving in the dark means the temperatures will be much lower and it’ll be a big challenge to get the tyres performing optimally, especially in the early stage when grip isn’t great due to sand on the track. Still, at the end of the day, the conditions are the same for everyone.”

Historic fortifications and traditional mud-brick houses form the exotic backdrop of the Diriyah E-Prix. The challenging circuit measures 2.495 kilometres in length and features 21 turns. Energy management and a good race strategy play an important role on this fast track with two long straights. The circuit is floodlit with state-of-the-art LED technology. For Pascal  Wehrlein, Diriyah is “one of the best tracks on the Formula E calendar.”

The worldwide broadcasting schedule of the Formula E event in Diriyah is available at: https://www.fiaformulae.com/watch/ways-to-watch.

The first photos from Diriyah will be available on the Porsche press database on 26 January. Race reports follow on 27 January (race 2) and 28 January (race 3). Further information about the TAG Heuer Porsche Formula E Team will be posted live on the Twitter channel @PorscheFormulaE. All relevant information about the team, the drivers and the racing series can be found in the Porsche Formula E Media Guide at media.porsche.com/formula-e. The content will be regularly updated throughout the season and expanded with additional interactive material.

Porsche contests season 9 of the ABB FIA Formula E World Championship with the Porsche 99X Electric Gen3. The new electric racing car featuring the Porsche E-Performance Powertrain – which underwent modifications in Weissach for the third generation vehicle in the innovative electric racing series – also serves as a development platform for the sports car manufacturer’s fully-electric production models. Energy management and efficiency are important factors for success in Formula E and in Porsche’s all-electric production cars. The maximum output of the Porsche 99X Electric Gen3 is 350 kW (476 PS), which is 100 kW more than the predecessor generation (Gen2). At least 40 percent of the energy used is recuperated via regenerative braking. The new Gen3 cars are the fastest, lightest, most powerful and most efficient electric racing cars ever built. 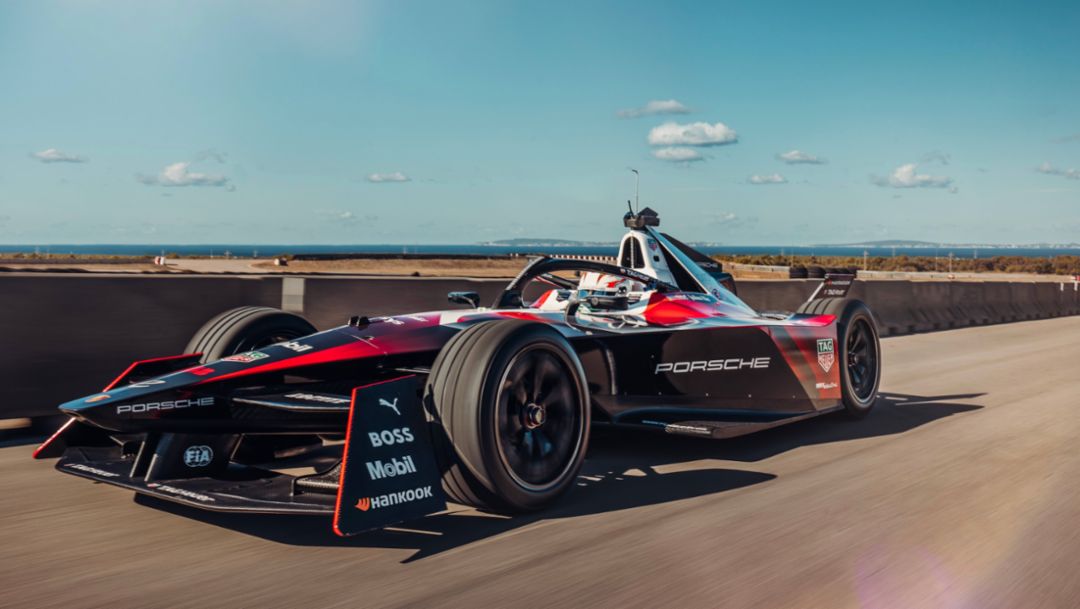 Porsche is committed to Formula E safety: With the all-electric Taycan Turbo S, Porsche again supplies the official safety car this season – thus underlining the importance of Formula E for Porsche Motorsport. Thanks to its driveability and safety as well as an output of up to 560 kW (761 PS), the top model in the Taycan range is the ideal choice as a safety car in the world’s first electric racing series. The striking paintwork incorporates the colours of all eleven competing teams as well as those of the FIA and Formula E. The design symbolises the joint commitment to the future of all-electric motor racing as well as social values such as diversity and community.

Formula E is the world’s first fully-electric racing series bringing thrilling motorsport to people living in major cities since 2014. As an accelerator for innovative and sustainable mobility technologies, it promotes the worldwide acceptance of electric vehicles. Eleven teams tackle the 2022/2023 season with 22 drivers. This guarantees interesting and fiercely competitive races. The TAG Heuer Porsche Formula E Team contests its fourth season of the innovative electric racing series with the Porsche 99X Electric Gen3. 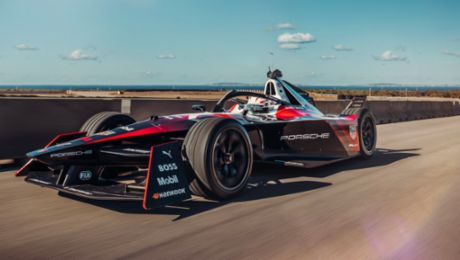