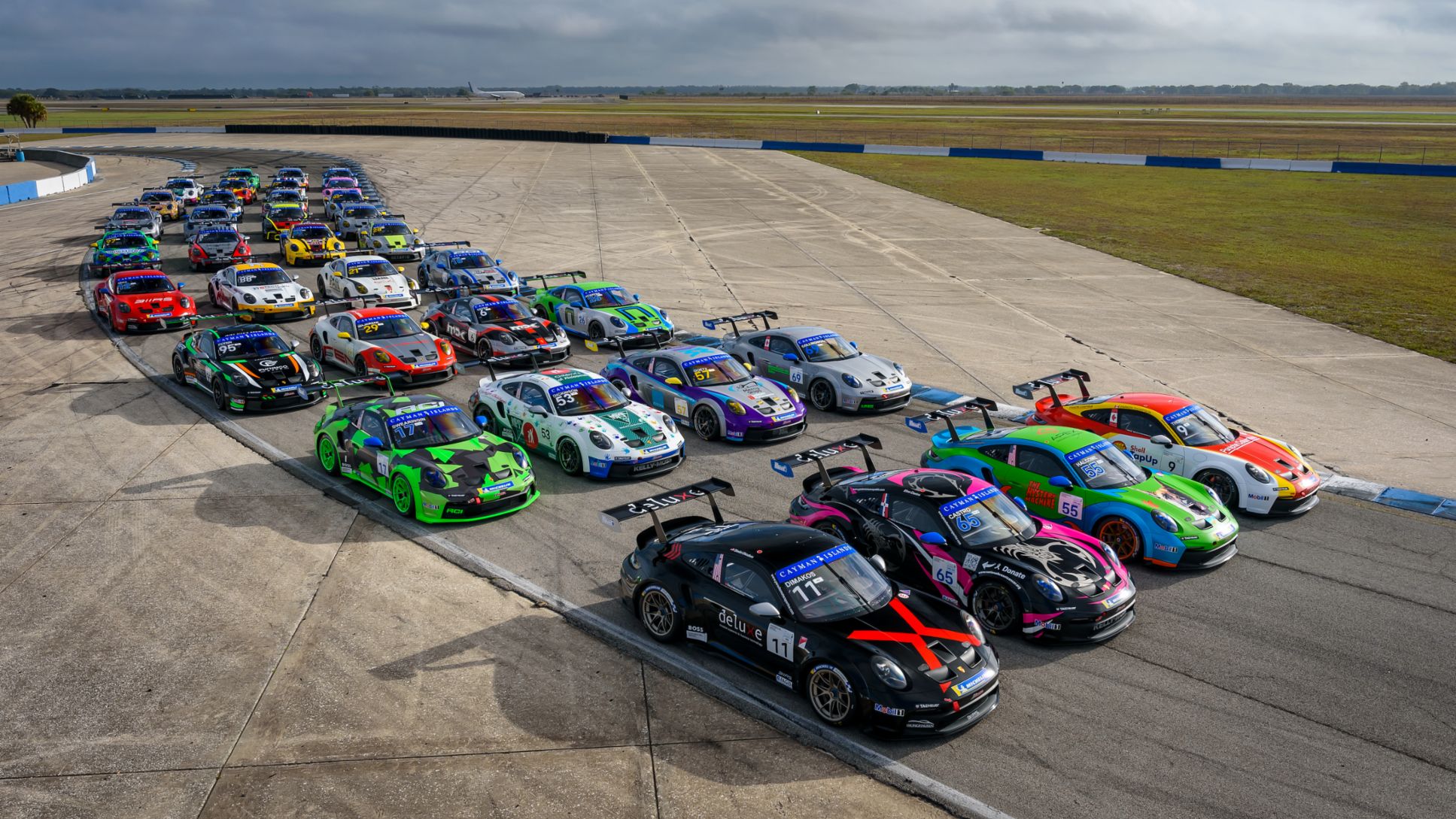 Porsche Carrera Cup North America Presented by the Cayman Islands brings 43 identical Porsche 911 GT3 Cup cars to its season-opening rounds this week at Sebring International Raceway. In only its second season, the premier one-make series will set a world standard for entries for a single region on the Porsche Motorsport Pyramid with Rounds 1 and 2 of the 16 race schedule. In a near-even distribution of entries across the three classes – Pro, Pro-Am and Am – the full field will be comprised of the newest Porsche 911 GT3 Cup race car, the type 992, at the Sebring, Florida event, March 16 – 17.

The opening weekend celebrates several milestones for the Porsche Motorsport North America (PMNA)-managed race series. The popularity of the development series is evidenced by its growing list of partners. Deluxe Corporation, a leading business solutions company focused on finance and payroll services joins the established list of marketing partners for the 2022 race season. A new three-class format introduces the “Am” category to the grid while the length of each race has been changed to 40-minutes. Accessibility also improves as each round of the Porsche Carrera Cup North America Presented  season will now appear live on the Peacock streaming service.

Deluxe Corporation and Porsche Motorsport North America (PMNA) have established a long-term, multi-faceted partnership that will positively impact not only the Porsche Carrera Cup North America, but Porsche auto racing efforts on the continent as a whole. The relationship extends to the presenting rights of Porsche Motorsport North America TV, the dedicated PMNA YouTube Channel providing the latest Porsche content from across the region (https://www.youtube.com/c/PorscheMotorsportNorthAmerica).  The agreement brings not only branding and activation initiatives but a direct working agreement as Official Partner and Official Supplier across the PMNA program.

In addition, Deluxe has taken a key marketing partnership role with 311RS Motorsport and the No. 11 Porsche 911 GT3 Cup car driven by Dimitri Dimakos (Chicago, Illinois). The young phenom, who turned heads in his only appearance at the 2021 season finale, is considered a top contender for the Al Holbert Cup, a special season-end recognition of the overall series champion. 311RS Motorsport debuted a stunning brand new Porsche 911 GT3 Cup car with major branding from Deluxe at the recent official test day at Sebring.

"Deluxe is thrilled to be partnering with a brand like Porsche. Both of our companies have a long history of innovation and performance," said Daniel Niccum, Vice President, Enterprise Programs at Deluxe. "At Deluxe, we see a customer need and we work to find the perfect solution. Porsche has the same approach on the race track and on the street. The results speak for themselves. Whether it is Porsche providing high performance race cars or Deluxe acting as your source for trusted business technology and payments, in both cases, our customers come out the winner.”

The Minneapolis, Minnesota-based company oversees one of the largest payment and business technology companies in the world. Founded in 1914, Deluxe has been an innovator creating the first checkbook as we recognize it today in addition to multiple tools which rapidly advanced printing. Today, the publicly traded Deluxe Corporation offers business products and services ranging from web marketing to payroll services, logo design to remote deposit capture, integrated receivables to proprietary marketing programs for banks. Deluxe has operations in the United States, Canada, Australia and Europe.

40-Minute Races. In 2022, all Porsche Carrera Cup North America rounds will be 40-minutes in length. This is a decrease of five-minutes from the inaugural season. The shortening of the races allows ten additional minutes to be added to other sessions each weekend, maximizes tire performance and more closely aligns the series with other one-makes around the globe – most of which run 30-minute rounds.

Am Class. Beginning with Round 1 at Sebring, the third class for the Porsche Carrera Cup North America will be known as “Am”. The category will be restricted to drivers 56-years-old and older. The class, which uses the type 992 Porsche 911 GT3 Cup race car as do all classes in the championship, provides drivers with more life experience the opportunity to contend against equally experienced drivers for race wins, podiums and the class championship.

Peacock Streaming. For the first time, the Porsche Carrera Cup North America will enjoy live race coverage on a premium streaming app: Peacock. While each session will continue to have live audio as well as timing and scoring available through the www.porschecarreracup.us in addition to live video coverage for races, the Peacock app places the one-make championship on the same platform as the IMSA WeatherTech SportsCar Championship, IMSA Michelin Pilot Challenge, NASCAR Cup Series and IndyCar Series further extending its race broadcast reach.

With 43 cars, the 2022 entry list for Sebring is the largest single-region, one-make series Porsche has ever assembled globally. It marks an increase of eight cars over the inaugural race weekend here last March. Unlike the debut in 2021, all Porsche 911 GT3 Cup race cars on the grid are type 992 making the “Super Sebring” weekend the largest gathering of the newest generation of the rear-mounted, normally aspirated 4.0-liter “Cup” car.

In pre-season testing, held March 7 – 8 at the 3.74-mile, 17-turn road course, Riley Dickinson (New Braunfels, Texas) led the timesheets with a lap of two-minutes, 2.254-seconds in the No. 53 Porsche 911 GT3 Cup car. Dickinson moves to the 2021 Championship-winning entrant, Kelly-Moss Road and Race, this year. 2021 Pro-Am class Champion Efrin Castro (Dominican Republic) also joins Dickinson at the Wisconsin-based race team to defend his crown in the No. 65. The pairing shares the team with 2021 Pro class runner-up Kay van Berlo (Netherlands) in the No. 3 Kelly-Moss-prepared entry. In total, nine Porsche 911 GT3 Cup cars will be made race-ready under the banner of the team owned by husband-wife principals Andy Kilcoyne and Victoria Thomas.

The high visibility Mobil 1 Twelve Hours of Sebring for the IMSA WeatherTech SportsCar Championship, Michelin Pilot Challenge and FIA World Endurance Championship (WEC) will condense the Porsche Carrera Cup North America into a two-day event. Practice and Qualifying sessions will be held on Wednesday, March 16. The two, 40-minute races will be run on Thursday, March 17. Round One will take the green flag at 9:15 a.m. ET/6:15 a.m. PT while Round Two will start at 1:25 p.m. ET/10:25 a.m. PT leaving very little time for repairs or corrections if something goes wrong in the first race.

Live timing and scoring of each Porsche Carrera Cup North America Presented by the Cayman Islands session can be found at www.PorscheCarreraCup.us. IMSA Radio will again provide play-by-play commentary for practice, qualifying and the two races. The races will be broadcast live on the official series web site – www.porschecarreracup.na –  and on the Peacock Streaming App.

“The success of the Porsche Carrera Cup North America Presented by the Cayman Islands both on the track and off has been overwhelming. We have the largest field any Porsche one-make has had for a single region. We are growing our social platforms, increasing the amount and regularity of content for our fans and, in addition to offering online streaming of our races at porschecarreracup.na, we now have an app streaming partner in Peacock. These are all very positive signs of the health of the Carrera Cup concept here in the United States and Canada.

"Year One, we worked to establish the series as a true steppingstone with the best teams and drivers fighting it out in the best one-make car, the Porsche 911 GT3 Cup, sold as a turn-key unit. Year Two, we are focused on the growth of the series in every aspect for partners, customers, the tracks and the fans. We are looking at everything we touch to make sure ensure we delivers a much value as possible to our competitors, teams, partners and fans."