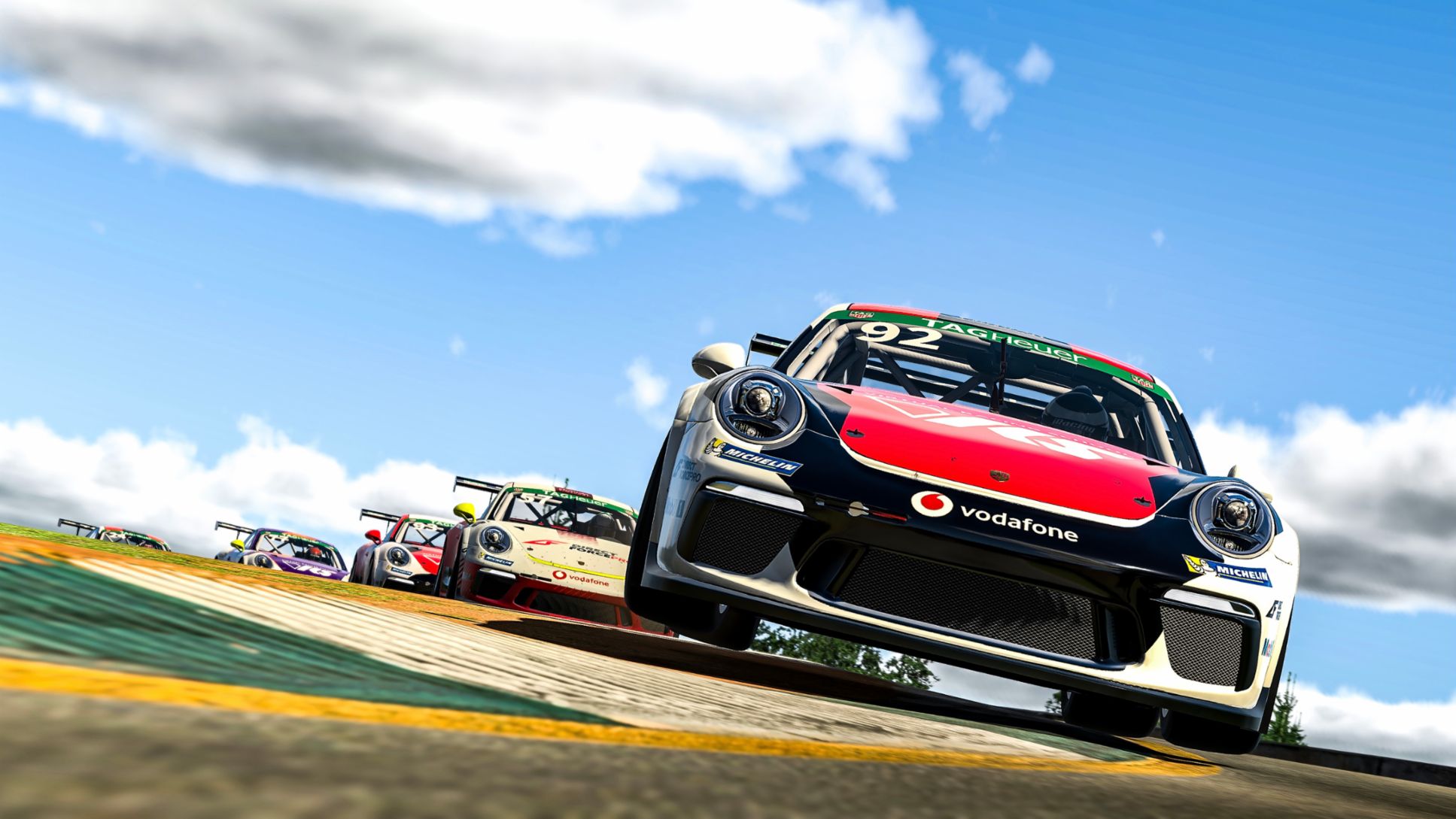 First-place in the sprint and a lucky winner of the main race, Joshua Rogers (Australia) took a giant leap forward in the fight for the Porsche TAG Heuer Esports Supercup (PESC) at the simulated Michelin Raceway Road Atlanta. After five of ten rounds this season, the Australian has pulled away considerably from his pursuers. Title defender Sebastian Job (United Kingdom) experienced a February 20 race day to forget in the in the virtual race series. Mitchell deJong (Temecula, California), held onto second-place in the season-long drivers’ standings, lost the chance to win the main race just a few yards from the finish line. Second-place went to Norway’s Tommy Östgaard ahead of Kevin Ellis Jr. (Great Britain). The PESC with the digital version of the Porsche 911 GT3 Cup – 991.2 generation – race car is run on the iRacing simulation platform.

Scoring the first double victory of the current PESC season with wins in both the spring and main event, Roberts further expanded his lead in the points’ standings. After five of ten rounds, he has pulled clear of his pursuers now holding 348 points. DeJong was able to defend second-place with 259 points.

This coming Saturday, February 27, the Porsche TAG Heuer Esports Supercup takes off into the second half of the season visiting Canada’s Montreal. The Formula 1 city circuit is located on the Île Notre-Dame and partly uses roads which are open to the public traffic. The tight right-left chicane leading into the main straight is regarded as one of the most famous passages of the 2.71-mile (4.361-km) Grand Prix circuit. Even famous race drivers had to bury their dreams of victory after hitting the wall at the outside of this corner, which has consequently been dubbed the “Wall of Champions”. The sim racers tackle a ten-lap sprint on the Circuit Gilles-Villeneuve, the main race goes over double this distance.

Joshua Rogers (AUS/Virtual Racing School): “We expected it would get difficult on the last lap. We were all very quick, especially in qualifying. Slipstream plays a huge role in such entertaining races. That’s why it was important to be in the right place at the right time. At first I wanted to take the lead on the penultimate lap, then I tried to position myself optimally for the final lap. In the penultimate corner things got pretty tight between me and Kevin Ellis, but I managed to squeeze next to him.”

Tommy Östgaard (N/Coanda Simsport): “I’m happy with second place. After my tough start to the 2021 season, this is a great result. In the first few races I was plagued by a lot of bad luck and I got caught up in accidents too often – that’s why I put in a lot of practice to get faster and avoid such situations using more race craft. I always take a good look at every incident to learn from it.”

Kevin Ellis Jr. (GB/Rahal Lettermann Lanigan Esports): “It’s a shame that the race ended like this. Mitchell and I actually gave each other enough space, but unfortunately it didn’t go well and it shouldn’t have happened that way. Josh then relegated me back to third, but maybe I gave in a little too early. All in all, I’m quite okay with another podium result.”

The ABB FIA Formula E World Championship enjoys a novel start to the new season. In Diriyah, Saudi Arabia, two night races will be contested on February 26 – 27 for the first time in the history of the innovative electric racing series. The TAG Heuer Porsche Formula E Team travels to the season-opening doubleheader event with fond memories. In November 2019, the squad celebrated a successful Formula E debut on the street circuit not far from Riyadh, with André Lotterer (Germany) scoring a second-place finish with the Porsche 99X Electric race car. His new teammate, Pascal Wehrlein (Germany), contests his maiden race as a Porsche factory driver in Diriyah this weekend as well. The Formula E season was originally scheduled to start in Santiago de Chile in January, however it was postponed due to the coronavirus pandemic and relocated to Saudi Arabia.

Porsche tackles its second season in the series with a very clear commitment to Formula E. The sports car manufacturer uses the fully electric single-seater sport for systematic development work and to expand its expertise in the field of battery-electric drives. After the successful debut season of the Porsche 99X Electric racer, the engineers in Weissach, Germany – motorsport headquarters for the German marque – have made extensive improvements to the powertrain. The team has also been restructured. Martin Füchtner takes over the role of Technical Project Leader Formula E. Malte Huneke, who held this position since the launch of the Porsche Formula E program, is now responsible for the overall vehicle development of all Porsche Motorsport racing vehicles.

The Diriyah E-Prix is contested on a 1.55-mile (2.494-kilometer) street circuit featuring 21 corners, which runs past old fortifications and traditional houses made of clay.

With 16 partners, the TAG Heuer Porsche Formula E Team again heads into its second season with an extraordinary partner portfolio. Eight are represented on the Porsche 99X Electric as on-car partners. TAG Heuer is at the forefront as the title and timing partner. Porsche and the Swiss manufacturer of luxury watches can look back on many successful collaborations in motor racing. The simulation software specialist ANSYS is the technology partner. Vodafone joins the team as the official communications partner. In addition to its role as title sponsor of the ABB FIA Formula E World Championship, the Swiss energy and automation technology group ABB appears on the Porsche racing vehicles. With its Mobil brand, ExxonMobil was closely involved in the development of the Porsche 99X Electric as a technology partner. The fashion company Hugo Boss is the global clothing partner of Porsche Motorsport and the team’s outfitter. As a technical partner for fireproof racing overalls as well as shoes and luggage, the squad is equipped by the sports lifestyle company Puma. The tire manufacturer Michelin, a long-standing partner of Porsche Motorsport, is also involved in Formula E. Other partners of the TAG Heuer Porsche Formula E Team are TRILUX (lights), C. & A. VELTINS (brewery), Humbel Gear Technology (gear technology), Kärcher (cleaning technology), Hazet (tool supplier), Red Bull (energy drinks), Stilo (helmets) and SACRED Coffee (coffee and tea).

With twelve teams and 24 drivers, the ABB FIA Formula E World Championship boasts another strong line-up in its seventh season. Ten automobile manufacturers are represented – more than in any other international motor racing series.

Formula E is the world’s first fully-electric road racing series bringing thrilling motorsport to people living in major cities. As an accelerator for innovative and sustainable technologies of mobility, it promotes the worldwide acceptance of electric vehicles with the aim to counteract climate change. The format is compact: practice, qualifying and race all take place on one day. Each race is contested over 45-minutes plus one lap. Formula E, which features a team and driver world championship for the first time this year, has attracted more automobile manufacturers than any other racing series. This makes for interesting and hotly contested races. The TAG Heuer Porsche Formula E Team tackles its second season running the Porsche 99X Electric in 2021.