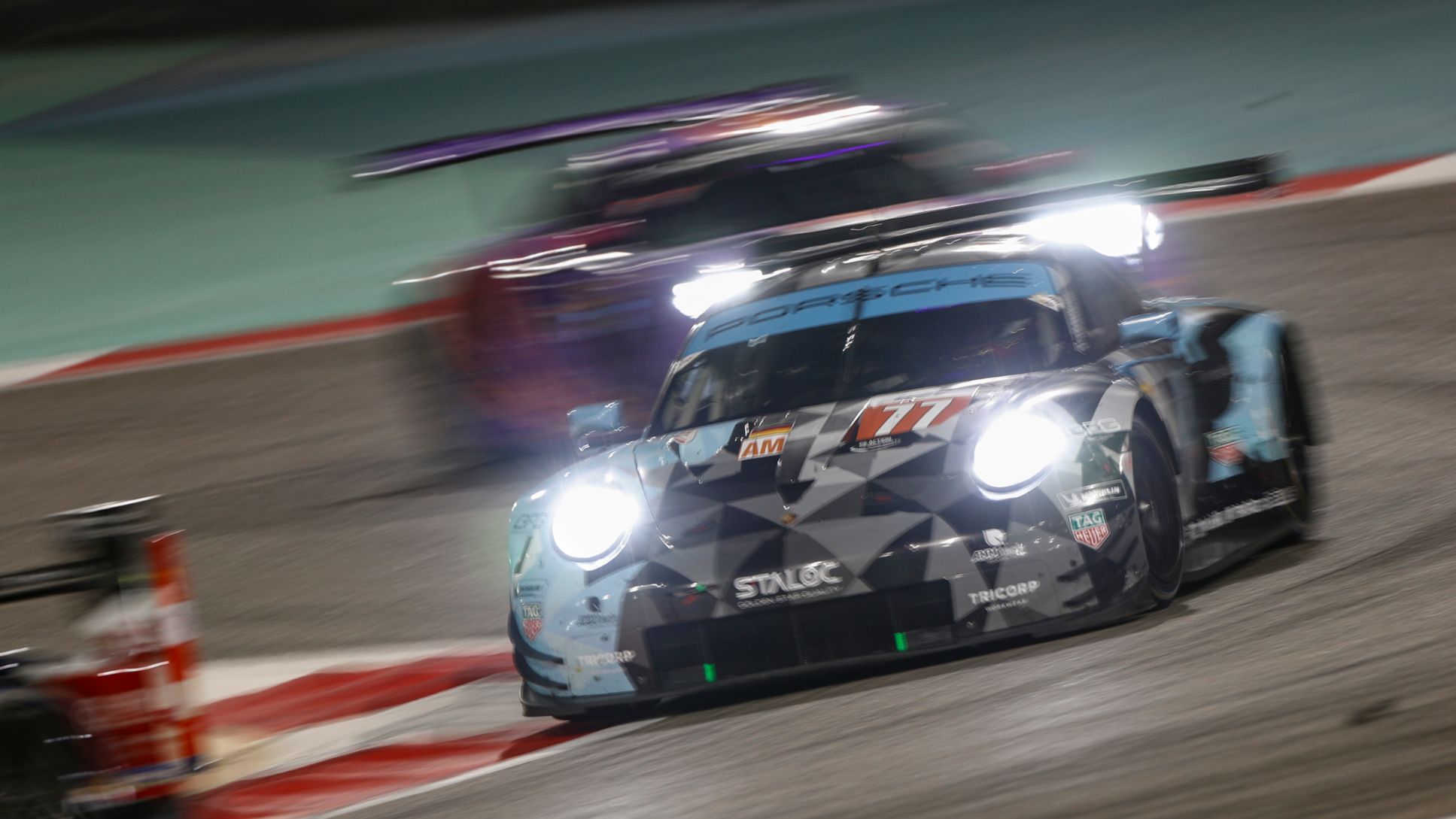 While the factory Porsche GT Team closed its seven-year history in the IMSA WeatherTech SportsCar Championship with a victory at the Mobil 1 Twelve Hours of Sebring in November, the popular Porsche 911 RSR race car will be back on the GTLM class grid for 2021. On January 6, WeatherTech Racing announced its move up to IMSA’s top GT class in combination with Proton Competition. The No. 79 WeatherTech Racing-entry will get its first taste of competition with the Porsche 911 RSR at Daytona International Speedway with the annual pre-season Roar Before the Rolex 24, January 22 – 24. The driving lineup of Cooper MacNeil (Hindsdale, Illinois), Richard Lietz (Austria), Kevin Estre (France) and Gianmaria Bruni (Italy) will challenge for their first class race win on January 30 – 31 with the the Rolex 24 At Daytona.

Proton Competition, owned by Christian Ried (Germany) has been a privateer entrant of Porsche race cars for decades and is currently racing the Porsche 911 RSR in the FIA World Endurance Championship (WEC) LMGTE-Am class and European Le Mans Series. 2021 is the first time that Proton Competition will compete fulltime in North America.

The agreement between Proton and WeatherTech will also see the team apply for an entry in the 24 Hours of Le Mans in the LMGTE-Pro Class.

Pascal Zurlinden, Director, Porsche Factory Motorsport.
“We’re very pleased that the Porsche 911 RSR will also be raced in the 2021 IMSA championship. The customer team WeatherTech Racing has a wealth of experience and has already notched up many successes with Porsche and others. Welcome back to the Porsche family. We support the team with engineers and works drivers and we anticipate many highlights in the 2021 season. I’m thrilled that this program materialized at short notice.”

Copper MacNeil, Driver, No. 79 WeatherTech Racing Porsche 911 RSR.
“We have put a lot of thought into this move. I have raced against this level of competition at Le Mans twice, most recently this year, and have felt comfortable with the added performance of the car. We are going back to running a Porsche, and I am looking forward to getting behind the wheel of the 911 RSR. It will be more pressure on me as a driver, but I am welcoming the added effort it is going to take to run GTLM in 2021. We raced with Christian at Le Mans in 2016, so we have an on-track history. I am looking forward to running the Rolex 24 with Richard, Kevin and Gianni. Proton has a great endurance racing history, and Porsche is always competitive at Daytona.”

Christian Ried, Owner, Proton Competition.
“We have been looking at entering the IMSA WeatherTech Championship for a few years. We just didn’t feel like the time was right until now. With the factory effort leaving, that left a void for Porsche in GTLM. We were able to get together with David and Cooper [MacNeil] to keep the Porsche brand racing at the top level of GT competition in IMSA. I am looking forward to the challenge and am excited to add IMSA to our racing schedule in 2021.”

Two races, two different winners and plenty of action at the season-opening round of the Porsche TAG Heuer Esports Supercup (PESC) on January 9. On the digital version of Brazil’s Autódromo José Carlos Pace, Joshua Rogers (Australia) from the VRS Coanda Simsport team commanded the sprint race over ten laps at the wheel of his virtual Porsche 911 GT3 Cup. Kevin Ellis Jr. (Great Britain) driving for the Apex Racing Team, went on to clinch victory in the main race over double the distance. The reigning series champion Sebastian Job (Great Britain) experienced a patch of bad luck at the first of ten rounds of the international Esports championship run on the iRacing simulation platform. After finishing the sprint race in twelfth-place, the British sim racer had to retire from the main event early with technical issues.

Rogers showed top form in qualifying and was rewarded with the best time and pole position for the first race of the season. With his compatriot and teammate Dayne Warren turning the second-fastest lap, the front grid row was firmly in Australian hands. The 2020 champion, Job, was unable to qualify further up the grid than twelfth-place. Regular motorsport Porsche Junior Ayhancan Güven (Turley) driving for the VRS Coanda Simsport sim racing team, achieved a top ten result at his maiden PESC outing. Rogers won the sprint to the first corner, settled in at the front of the pack and proceeded to control the race from there. Warren, however, stayed within striking distance and made several attempts to overtake the 2019 PESC champion. Four other VRS Coanda Simsport drivers including Mitchell DeJong of Temecula, California, Norway’s Tommy Östgaard and Martin Krönke (Germany) trailed closely behind. While viewers were treated to many thrilling tussles for positions and collisions, especially in the midfield, Rogers calmly brought home a convincing lights-to-flag victory. Positions two and three went to Warren and Östgaard. Martin Krönke (Germany) took the flag in fifth--place. Job had to settle for twelfth-place, while Güven finished his debut race in 32nd after being pushed-off by another competitor.

Due to the reverse grid line-up of the first eight starters in the main race, as stipulated by the regulations, Alejandro Sánchez (Spain) started the main race from pole position. This was thanks to the Spaniard’s strong push in the sprint race, which catapulted him through the field from P14 to eighth-place. Sánchez led the pack into the Senna-S chased by Ellis Jr. and newcomer Charlie Collins (Great Britain). Meanwhile, Rogers immediately launched a furious pursuit from eighth-place on the grid. The Australian gained several positions early on and was running in fourth-place after four laps. On lap five, Ellis Jr. snatched the lead from Sánchez, only for the Spaniard to then come under huge pressure from Collins and Rogers. Three laps later, the fierce duel between Rogers and Sánchez ended in a collision, with both drivers falling hopelessly behind. In the meantime, Ellis Jr., DeJong, Collins, newcomer Zac Campbell (Lawrenceville, Georgia) driving for the Apex Racing Team and Krönke turned their laps at the front. At this point, no fewer than three rookies were among the top ten. Just after the halfway mark, Job had to throw in the towel with technical problems. With two laps to go, the fight for victory turned fierce. Third--year driver DeJong made one final attempt to get past the leading Kevin Ellis Jr. Both raced wheel-to-wheel for much of the lap, with Ellis Jr. ultimately taking the flag by a nose. Behind the pair, Redline driver Maximilian Benecke grabbed his chance: After impressive maneuvers and a valiant chase, the German beat DeJong to second place in the photo finish. DeJong was bested by a mere 23-thousandth of a second. Rogers finished the race in 23rd-place ahead of Güven.

Kevin Ellis Jr., Driver, GB/Apex Racing Team Porsche 911 GT3 Cup Digital.
“The early phase was extremely turbulent with a lot of contact and incidents. Luckily, I remained unscathed and managed to set my pace at the front. Managing the tire temperature is critical. At the end, things got really tight again and I had to pull out all stops. At the flag, it was a matter of millimeters – in my favor, fortunately.”

Mitchell DeJong, Driver, VRS Coanda Simsport Porsche 911 GT3 Cup Digital.
“Third-place is a decent result after a rather mediocre qualifying. Still, I’m a little disappointed. In the end, I tried everything; for a moment I was even in leading in the fight but it wasn’t enough. It was fair at all times, even though we didn’t give each other an inch.”

#PESC – The #Porsche @TAGHeuer #Esports #Supercup revs up: This Saturday, the first round of the international Esports championship will be contested @iRacing: 40 sim racers tackle the digital @InterlagosTrack with their virtual #911GT3Cup

The action in the premier Esports one-make championship – the Porsche TAG Heuer Esports Supercup – continues without pause. This coming Saturday, January 16, round two of the third-season of the series will be contested on the digital version of the Circuit de Barcelona Catalunya in Spain. The Grand Prix circuit on the outskirts of the Spanish metropolis was on last year’s calendar of the global Esports championship and treated fans to some action-packed racing. At that time, Germany’s Maximilian Benecke won both the sprint and the main race driving for the Redline squad. The 2.89-mile (4.655-kilometer) circuit throws special challenges at sim racers, most notably in terms of driving and finding the ideal setup for their Porsche 911 GT3 Cup virtual race cars. The mix of long straights and demanding corner combinations – several of which are blind corners – requires driving skill and substantial experience. The sprint is contested over nine laps with sim racers covering twice that distance in the main race. Like at the season-opener, celebrity influencers will add to the Esports show in Barcelona. They will fight for victory in two All-Star races.

Fans can watch the events live on Porsche’s channels YouTube and Twitch. The races are also streamed on these two video platforms via iRacing. Further information on the Porsche TAG Heuer Esports Supercup can be found on the Porsche Motorsport Hub Porsche Newsroom and the Twitter account @PorscheRaces.