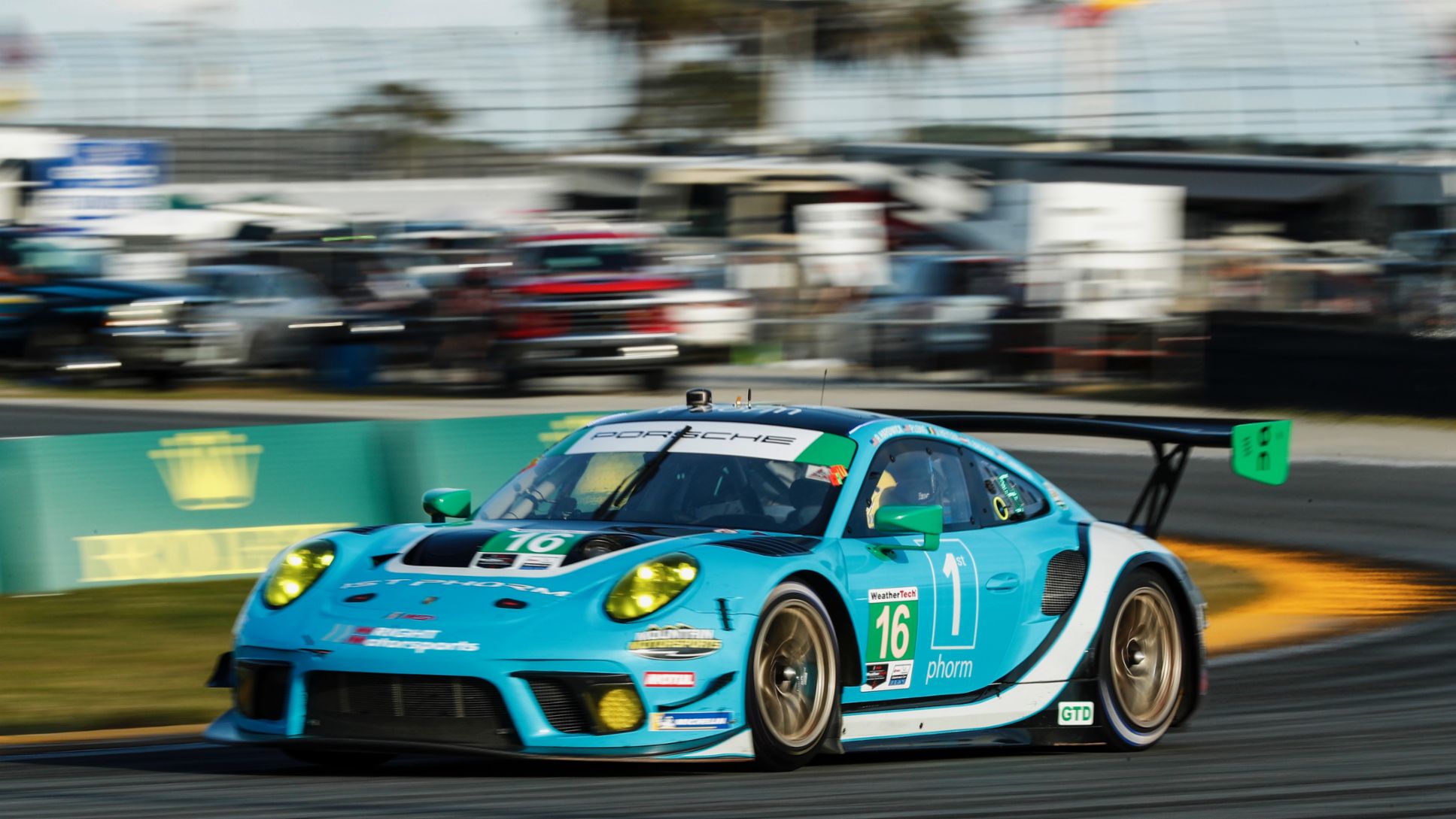 Porsche customer teams head into round two of the IMSA WeatherTech SportsCar Championship with high expectations. This year marks the 69th running of the tradition-steeped Mobil 1 Twelve Hours of Sebring at the Florida race track. In 2020, Porsche racing cars won both GTLM and GTD classes at Sebring International Raceway. Now, the teams look to repeat this achievement. In the GTLM class, WeatherTech Racing fields one of the 515 hp Porsche 911 RSR race cars. In the GTD category for race cars complying with FIA GT3 regulations, three privateer squads campaign a total of four 911 GT3 R machines with a target to win the Pro-Am style class on March 20.

The focus for the engineers of the customer teams will be the setup of the 911 RSR and the four 911 GT3 R. The Sebring International Raceway throws major challenges at man and machine. About a third of the 3.74-mile (6.02-kilometer) racetrack consists of concrete slabs, which were previously part of the runway at the former Hendricks Army Airfield – a World War II era bomber base. The track is known for its bumps – especially on the final turn 17 section entering the main straight. Due to this special feature, the racetrack in central Florida has the social media hashtag #RespectTheBumps.

Porsche is by far the most successful manufacturer at this event on the storied circuit, which has regularly hosted the endurance race since 1950. To date, the Stuttgart, Germany marque has netted 18 outright wins and 74 class victories at Sebring. In the last three years, the Porsche 911 RSR has won the GTLM class at the twelve-hour race in Florida. In 2020 – a race run in November after being postponed for COVID concerns – the Wright Motorsports customer team won the hotly contested GTD category. In addition to the 24-hour highlight at Daytona and the races at Road Atlanta and Watkins Glen, round two of the season counts towards the IMSA Michelin Endurance Cup.

The factory drivers Mathieu Jaminet (France) and Matt Campbell (Australia) team-up with gentleman driver Cooper MacNeil (Hinsdale, Illinois) in the cockpit of the No. 79 Porsche 911 RSR-19 fielded by the WeatherTech Racing customer squad. The outfit is supported by Proton Competition from Germany.

In the GTD class, the Wright Motorsports customer team lines up on the grid with a Porsche 911 GT3 R as last year’s class winners. In the No. 16 car, the American factory pilot Patrick Long (Manhattan Beach, California) joins forces with Belgium’s Jan Heylen and Trent Hindman (West Long Branch, New Jersey). Hindman returns for the endurance races as full-season teammate to Long, Ryan Hardwick (Atlanta, Georgia) will sit out the endurance race having also missed the Rolex 24 at Daytona following an accident. The Georgian is scheduled to return to the cockpit at round three at the Mid-Ohio Sports Car Course on May 14 – 16).

Drivers' comments before the race

Steffen Höllwarth, Head of GTLM Operations.
“We used the time after the season opener at Daytona to tweak some of the processes within the team. We tested at Sebring and we’ll be well-prepared for the race there.”

Sebastian Golz, Project Manager Porsche 911 GT3 R.
“The track has character – there is no such thing as smooth and gentle at Sebring. For twelve long hours, the bumpy track surface gives drivers and the entire technology a good shakeup. In the race, each of the 911 GT3 R will cover a distance of around 1,200-miles (1,900 kilometers), averaging a good 110 mph (178 kmh). That’s not easy for the driver or car. But when Wright Motorsports won in 2020, we saw that our vehicle is perfectly prepared for such tasks.”

Matt Campbell, Driver, No. 79 WeatherTech Racing Porsche 911 RSR.
“I love the Sebring circuit. I’ve raced there with the WEC and I’ve tested there often. Despite the rough bumps, the track is great fun – especially at the wheel of the Porsche 911 RSR. I’m really looking forward to my first race with WeatherTech Racing. Mathieu and I share the car with Cooper MacNeil at Sebring. For the following shorter races we take turns. I can gain a lot of extra experience and hopefully achieve decent results.”

Laurens Vanthoor, Driver, No. 9 Pfaff Motorsports Porsche 911 GT3 R.
“It’s great that the long break after the opening round will be over soon. We put in a strong drive at Daytona, but an incident hampered us from yielding the deserved result. All in all, we gave a strong performance at our first joint outing as a team. We now want to build on that and fight for class victory at Sebring. I think that’s a realistic goal.”

Patrick Long, Driver, No. 16 Wright Motorsports Porsche 911 GT3 R.
“Sebring is a racetrack with soul. It’s one of the greatest challenges in motor racing and it really puts man and machine to the test. It’s an event that I always very much look forward to. The fact that we won the GTD class there last year is great, however our focus is on this season. In terms of the championship, it’s important to earn maximum points at every round. That’s our goal for the upcoming race.”

Ryan Hardwick, Driver, No. 16 Wright Motorsports Porsche 911 GT3 R.
“The team had a great finish at Daytona in the Rolex 24 at Daytona, and I want them to have the best shot at the Twelve Hours of Sebring by keeping the same team together. Since I’ve already missed the first race of the year, I really want to sit this weekend out so that my personal focus is on the sprint championship.”

Jan Heylen, Driver, No. 16 Wright Motorsports Porsche 911 GT3 R.
“We’re all excited to go back to Sebring to try to defend our win. The team has been hard at work and I feel confident that we will have a car to fight for the top step of the podium. I’m incredibly grateful to be here with Wright Motorsports, Patrick, Ryan and all our partners who make this happen. We wish Ryan was in the car with us, but we’re also happy to welcome Trent back.”

Earl Bamber, Driver/Owner, No. 88 Team Hardpoint-EBM Porsche 911 GT3 R.
“At the Daytona season opener, we had a really fast car, but we couldn’t harvest the just rewards. That should change at Sebring. As a team, we’ve gained a lot of insights and thanks to meticulous analyses, we’ve drawn the appropriate conclusions for the upcoming events. Trenton Estep rounds off our driver lineup at Sebring. He’s a former champion of the Porsche GT3 Cup Challenge. So, my two teammates come from top-class Porsche Cups. I’m particularly thrilled because it underlines the opportunities for advancement and it’s a great indication for the drivers who are starting the debut season of the Porsche Carrera Cup North America at Sebring.”

Christina Nielsen, Driver, No. 99 Team Hardpoint-EBM Porsche 911 GT3 R.
“Our car ran really well at round one in Daytona, so I have high expectations for the upcoming race. Within the team, we reshuffled the cockpit crew. That’ll be interesting. Sebring suits me really well. I’ve scored some big successes there in recent years. The bumps are typical for the track. They get worse from year to year, which makes the race extremely exhausting.”

How to watch the race

The twelve-hour race of the IMSA WeatherTech SportsCar Championship gets underway on Saturday, March 20, at 10:10 a.m. (ET). Television coverage can be found on the NBC Sports family. The entire race can be viewed live outside the USA and Canada on www.imsa.com. Live timing of all sessions is available at scoring.imsa.com.

Wright One. No. 16 Represents Porsche in Michelin Pilot Challenge at Sebring.

The 2021 race season looked like it was off to a strong start for Wright Motorsports in the IMSA Michelin Pilot Challenge at Daytona International Speedway in January. However, an incident in the second practice sidelined the team for the first race of the season. Despite this, the Ohio-based operation has rallied and will have the only entry for the German marque in the two-hour road-car based GT4 series on Friday, March 19 at Sebring International Raceway. The No. 16 Wright Motorsports Porsche 718 Cayman GT4 Clubsport will carry the Porsche banner in the Alan Jay Automotive Network 120 with full-season driver Jan Heylen (Belgium) and Max Root (San Diego, California).

Root is not new to the John Wright-led operation having raced in the IMSA Porsche GT3 Cup Challenge USA by Yokohama in the past. In 2020, the young driver celebrated the SRO GT World Challenge America Am championship title with Wright Motorsports in a Porsche 911 GT3 R race car. In addition to sharing the 718 Cayman Clubsport cockpit with Heylen, Root was announced to pilot the Moorespeed-Wright Motorsports Porsche 911 GT3 Cup car in the inaugural season of the Porsche Carrera Cup North America as well.

Root will replace Ryan Hardwick (Atlanta, Georgia) for this round only, as Hardwick shifts his focus to the next race at the Mid-Ohio Sports Car Course, scheduled for May 14 – 16. Heylen and Root, now a Porsche Junior Program driver, previously drove together in the 2020 Indianapolis 8 Hour, where the pair with Fred Poordad, secured a class victory in the No. 20 Porsche 911 GT3 R.

The entry list for the Alan Jay Automotive Network 120 boasts a competitive field of 19 other GS class entries and 15 TC class entries. The field will take the green flag on Friday, March 19 at 2:25 p.m. ET. It can be viewed live on IMSA.tv or the NBC SportsGold TrackPass app, with additional live coverage provided by IMSA Radio.

Jan Heylen, Driver, No. 16 Porsche 718 Cayman GT4 Clubsport.
“Unfortunately, we had to miss Daytona, but we’re excited to get the season going and hopefully score some good points towards our championship fight. We’re blessed to have Ryan and his partners as part of the team and their continued support, and I’m excited to getting back in the car with him at our next event. For Sebring, Max will be stepping in to replace Ryan. Max has been with Wright Motorsports for the last couple of years, so he was the obvious pick for the seat, and we know he will be a great fit with mega speed. I look forward to working with him and hopefully we’ll find ourselves in a place to fight for a podium.”

Max Root, Driver, No. 16 Porsche 718 Cayman GT4 Clubsport.
“I’m excited to be joining Wright Motorsports and their Michelin Pilot Challenge 1st Phorm GT4 program with Jan Heylen as my co-driver. Sebring is an amazing track for the Porsche. This is going to be a fantastic weekend I believe all the preparation that John and everyone at REI Motorsports has put into this program that's going to set us up for success. We are going to keep our heads down, we're going to respect the bumps, and I look forward to getting out there in my first GT4 race.” 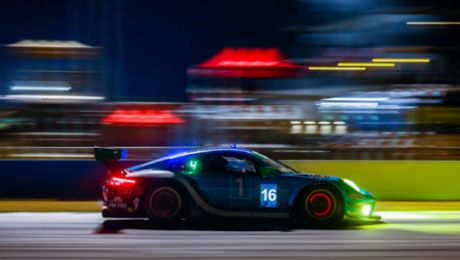 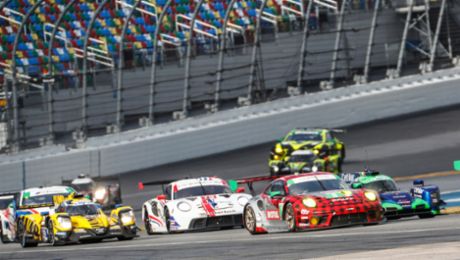 Customer operations have always been the backbone of the marque’s great racing heritage.