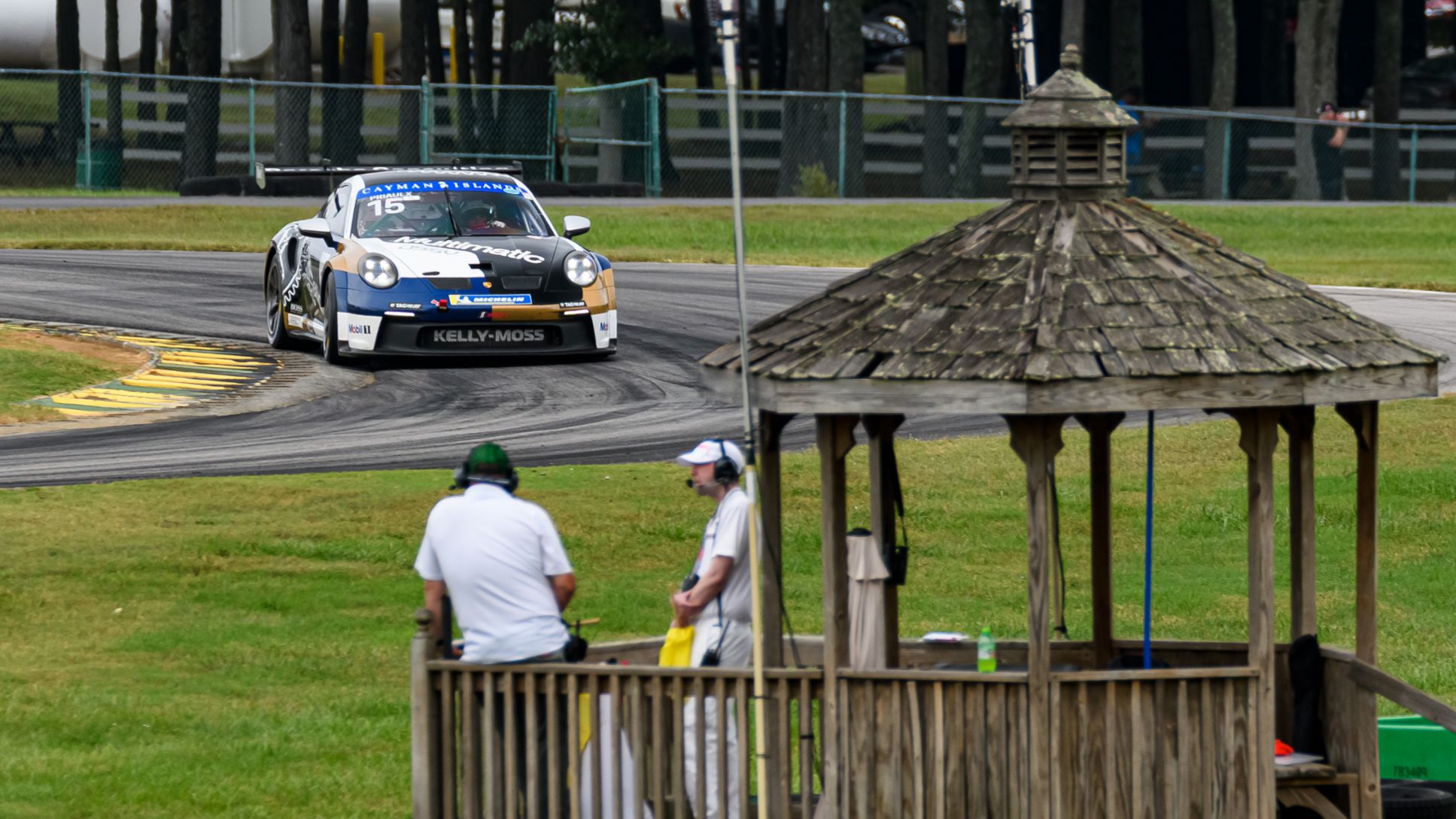 Round 12 of the 16 round championship illustrated the intense back-and-forth of the first-year Pro class. Having lost the overall points lead at the most recent weekend at the Indianapolis Motor Speedway, van Berlo fought back to take the pole position in wet conditions on Saturday morning. Race time arrived dry, but the Dutchman kept on pace moving the No. 3 Kelly-Moss Road and Race Porsche 911 GT3 Cup car into the race lead at the green flag. Lap-after-lap he grew the gap to the championship leader, his teammate, Seb Priaulx (United Kingdom) and Riley Dickinson (New Braunfels, Texas) piloting the No. 53 for locally based Team Hardpoint. While Priaulx fought to hold-off Dickinson, van Berlo raced to his sixth win of the season. However, with Priaulx winning the battle for runner-up, the driver of the No. 15 Kelly-Moss Road and Race Porsche 911 GT3 Cup car maintained his lead in the championship entering Round 13 of the title chase. Dickinson took the checkered flag in third-place – his sixth podium of the season. Parker Thompson (Canada) maintains third-place in the championship after finishing in fourth-place in a late-race charge with the No. 9 JDX Racing Porsche. The Canadian will need a strong run in Sunday’s 45-minute race to keep his chances of winning the Pro class championship entering the final three rounds scheduled for Michelin Raceway Road Atlanta, November 10 – 12.

Alan Metni (Austin, Texas) maintained his strong hold on the Pro-Am class racing to a convincing victory – his eighth of the season – behind the wheel of the No. 99 iFly Kelly-Moss Road and Race Porsche 911 GT3 Cup, type 992. He was ahead of his nearest championship contender, Efrin Castro (Dominican Republic) who drove the Team Hardpoint No. 65 to a podium finish at the team’s home track. Castro was just ahead of Curt Swearingin (Chattanooga, Tennessee) who returned to the podium in third-place after earning his first victory at Indianapolis a month-ago in the No. 17 ACI Motorsports Porsche 911 GT3 Cup car. By virtue of a fastest race lap (1:48.450), Castro will start on the class pole position for Sunday’s second race at VIR, round 13 of the championship.

Matt Halcome (Dallas, Georgia) earned his sixth Pro-Am 991 class victory of the season in the No. 55 Goldcrest Motorsports “Mystery Machine” Porsche 911 GT3 Cup, type 991.2. The Georgian used the wet conditions in the morning qualifying session to place ahead of several Pro-Am class competitors for his best overall start of the season. The dry race conditions allowed the drivers of the newer type 992 machines to overtake quickly forcing Halcome to race both ahead and behind him. He held on for the win, extending his points lead over Grady Willingham (Birmingham, Alabama) who finished in third-place driving the No. 21 Goldcrest machine and Conor Flynn who raced the No. 95 Irish Mike’s Racing Porsche to second-place. Halcome will again be at the point of the Pro-Am 991 class in Sunday’s race earning the class pole position with a race lap of 1:51.515.

Porsche Carrera Cup North America Presented by the Cayman Islands championship leader Seb Priaulx (United Kingdom) added to his points gap in a dramatic Round 13 of the premier one-make series at VIRginia International Raceway (VIR). The driver of the No. 15 Kelly-Moss Road and Race Porsche 911 GT3 Cup race car entered the 45-minute race on Sunday, October 10, with a 34 point lead over teammate Kay van Berlo (Netherlands) who had driven the No. 3 Kelly-Moss Road and Race Porsche to victory in Saturday’s Round 12. However, a first lap incident ended the Dutchman’s day against the Turn Two barrier of the 3.27-mile, 17-turn track in Alton, Virginia. His 13th-place finish coupled with Priaulx’s victory nearly doubled the Brit’s led to 61 markers leaving the penultimate weekend of the inaugural season of the all-Porsche 911 GT3 Cup race car series.

As the 28-car field came to the green flag at 12:15 p.m. ET for Race 2, the front row of Priaulx – van Berlo promised a head-to-head battle for the top-two in the Drivers’ points. Just behind, in fifth-position on the starting grid, sat Parker Thompson (Canada) who is the third driver with an opportunity to win the Pro title. The anticipated battle would come to a screeching halt against the Turn Two barrier when van Berlo cut across a surging Thompson in the No. 9 JDX Racing Porsche. The right front of the green and white Kelly-Moss Porsche was too damaged to return to competition relegating an uninjured van Berlo to 13th-place and only three-points. While Thompson would settle into third-place, it was Riley Dickinson (New Braunfels, Texas) who charged the leader hard with the No. 53 Team Hardpoint Porsche 911 GT3 Cup. The young Texan pressured Priaulx throughout the race shadowing the navy blue and white Porsche 911 GT3 Cup as closely as a half-second until the checkered flag. However, it was Priaulx scoring his fourth win of the season with Dickinson close-behind in second-place.

Entering the final weekend, three drivers are still mathematically capable of winning the Pro Drivers’ Championship: Priaulx (286 points), van Berlo (225) and Thompson (210). 90 points are available for a pole position (5 points per pole for a total of 15 points) and race sweep (25 points each race win) at the three rounds scheduled for Petit Le Mans at Michelin Raceway Road Atlanta, November 10 – 12.

Efrin Castro (Dominican Republic) earned his fourth-win of the season in dramatic style in the No. 65 Team Hardpoint Porsche 911 GT3 Cup car. The hometown team scored the win on the final lap as points leader Alan Metni (Austin, Texas) spun the No. 99 iFly Kelly-Moss Porsche 911 GT3 Cup car in Turn 1. Castro, who had been pressuring hard, narrowly passed the spinning eight-time winner on the outside to secure the victory. The win also kept the title battle for the class dedicated to drivers 40-years old and older who campaign the most current generation Porsche 911 GT3 Cup race car, the type 992. Tim Pappas (Boston, Massachusetts) chased Castro and Metni across the line in the JDX Racing-prepared No. 54 adorned in Pappas’s familiar Black Swan Racing livery.

Metni’s 282 points gives him a 39-point lead over Castro with three races remaining.

Matt Halcome (Dallas, Georgia) added a seventh Pro-Am 991 class victory to his season tally in the No. 55 Goldcrest Motorsports “Mystery Machine” Porsche 911 GT3 Cup, type 991.2. Halcome holds the strongest control of any championship leader with 278 points to Grady Willingham’s (Birmingham, Alabama) 205 points. Willingham finished in third-place with the No. 21 Goldcrest Motorsports-prepared Porsche. For the second race in a row, Irish Mike’s Racing driver Conor Flynn (Jacksonville, Florida) earned a podium result to prevent a sweep by Goldcrest. Flynn’s second-place matched his season-best finish. Earlier this season he drove the No. 95 Porsche to second-place at both Road America and Indianapolis.

The season-finale tripleheader for Rounds 14, 15 and 16 will come at Michelin Raceway Road Atlanta, November 10 – 12. The inaugural champion in each class – Pro, Pro-Am and Pro-Am 991 – of The Porsche Carrera Cup North America Presented by the Cayman Islands will be crowned at a celebration banquet on Friday, November 12. 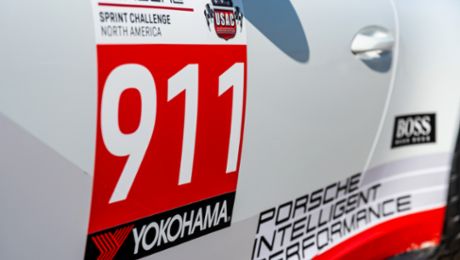 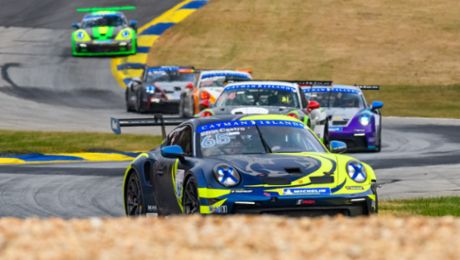