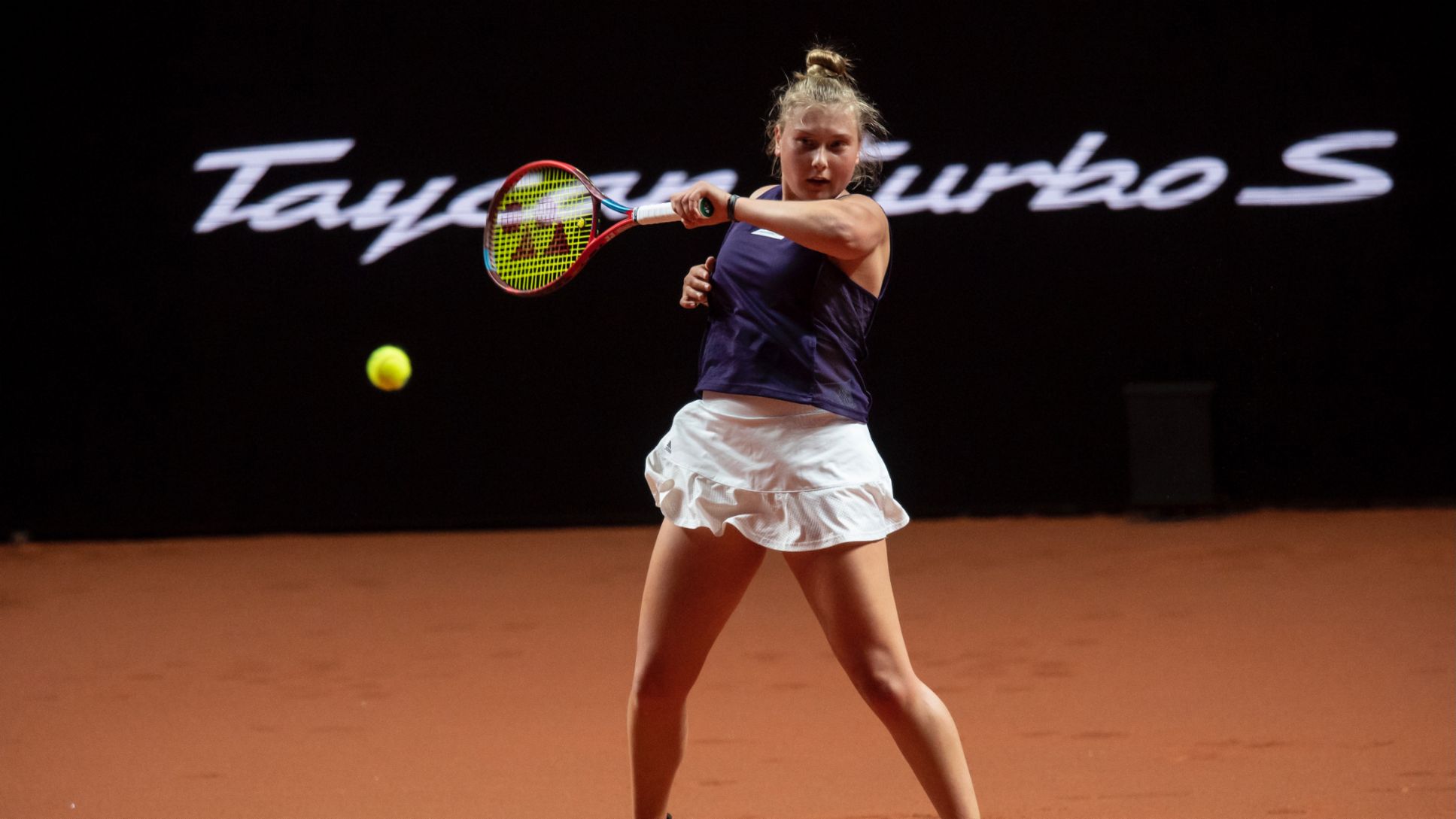 The favourites have progressed on the first day of main draw matches at the Porsche Tennis Grand Prix – and a junior from the Porsche Talent Team has bowed out of the first WTA tournament of her fledgling career after putting on an impressive display in the Porsche Arena.

If the first singles of the day had been played in front of spectators, then Nastasja Schunk would have won over all their hearts. The 17-year old youngster, who had previously left an excellent impression when winning her two qualifying matches, battled bravely right up until the very end against Belinda Bencic. There was little to choose between the players in the first set which the German eventually lost 6-4 after having chances against the world No. 12. But the Swiss then upped a gear and won the second comfortably 6-2 even though her young opponent never gave up staving off a total of five match points in the process.

The Porsche Tennis Grand Prix also came to an early end for Andrea Petkovic on Monday. Playing Maria Sakkari, the German, who was given a main draw wild card for the long-standing Stuttgart tournament, had no real chance and was beaten in two straight sets 6-2, 6-2. The Greek world No. 19, who has already beaten numerous top players this season and who recently fought her way to the Miami semi-finals, is appearing in Stuttgart for the first time and praised the Porsche Tennis Grand Prix in the highest tones in the post-match interview. Why hadn’t she come along to the Porsche Arena earlier? “It unfortunately wasn’t possible as I wasn’t good enough for this fantastic tournament.”

The world No. 1 also made her debut in the Porsche Arena. Partnered by Jennifer Brady (USA), the Australian Ashleigh Barty, the winner of the 2019 Porsche Race to Shenzhen and the WTA Finals, comfortably advanced to the next round of the doubles.

More information in the press release.

There is going to be a spectacular start to the main draw matches at the Porsche Tennis Grand Prix. The draw ceremony on Centre Court in the Porsche Arena on Sunday when Julia Görges, the 2011 winner, pulled the names out of the “hat” has produced some highly promising matches in as early as the first round. After winning their way through the preliminary tournament, the qualifiers now face tough-looking matches against some of the world’s top players. The only 17-year old Nastasja Schunk from the Porsche Talent Team, the world No. 972, will start her campaign at the 44th edition of the Porsche Tennis Grand Prix on Monday against Belinda Bencic. World ranked No. 12, the Swiss is one of the favourites. Andrea Petkovic will also face a strong opponent: the Greek Maria Sakkari has already beaten numerous top players this season.

With Ashleigh Barty and Angelique Kerber in attendance, the draw for the 44th Porsche Tennis Grand Prix was staged as a part of a stylish ceremony. The first-round pairings drawn with the help of the Porsche Brand Ambassador Julia Görges promise tennis of the highest class right from the very start. The top match is the one between Petra Kvitova and Jennifer Brady. The title holder and two-time Wimbledon champion from the Czech Republic will take on the much-improved American who was the runner-up at the recent Australian Open – no other tournament in the world can offer such a high-class first round match.

Led by the Porsche Brand Ambassador Angelique Kerber, a total of eight German players are in the Porsche Tennis Grand Prix’s main draw field. The 2015 and 2016 Stuttgart winner Angelique Kerber was a full member from the very start and Laura Siegemund, the 2017 winner, was given a direct entry today. Andrea Petkovic is in the line-up after receiving a wild card. Five other Germans earned their right to a place in the main draw via qualifying which was concluded on Sunday. Porsche Team Germany’s Mona Barthel and Anna-Lena Friedsam, the 2019 doubles winners, have qualified as has Nastasja Schunk from the Porsche Talent Team. The day’s biggest surprise was sprung by Julia Middendorf. After losing the first set 6-2 against the far more experienced Tamara Korpatsch, the Porsche Junior Team player pulled out all the stops to take the next two 6-3, 6-0. She duly fulfilled her dream of reaching the first ever WTA main draw of her budding career. Her opponent’s disappointment however did not last long as she was also later given a berth in the exclusive line-up that includes seven Top 10 players as a lucky loser.

“We’d like to thank all the players that have come to us.” Oliver Blume, Chairman of the Executive Board of Porsche AG

In a video message broadcast at the draw ceremony, the Chairman of the Executive Board of Porsche AG, Oliver Blume addressed both the players and the fans. “Porsche is very grateful that we have been able to hold this tournament for such a long time. It is one of the tennis season’s highlights and one of the most important events in the Stuttgart region,” he said. “For years now, the Porsche Tennis Grand Prix has stood for fantastic sport. We’d like to thank all the players that have come to Stuttgart. And we’d like to thank the fans all over the world that follow the Porsche Tennis Grand Prix.”

Ashleigh Barty pleased to be in Stuttgart

Whilst the qualifying finals were still being played on Courts 1 and 2, Ashleigh Barty and Angelique Kerber teamed up for a practice session on Centre Court. “Up until now, I’ve enjoyed every second in Stuttgart,” said the world No. 1 from Australia who is appearing in the Porsche Arena for the first time. “I love having so many good players around me. I’m pleased to be here and will do my very best.” It is something Angelique Kerber, who is aiming to get off to a good start to the clay court season in Stuttgart, also wants to do. “I’ve trained hard in recent weeks so that I can come here well-prepared,” she said. The lack of fans hurts but the two-time Stuttgart winner also knows, “The fans are here even though they’re only in front of their TV screens. And they are always in our hearts."

Action-packed start to the Porsche Tennis Grand Prix. In the first round of qualifying, 24 players from 12 nations served up exciting matches in the battle for one of the six remaining main draw berths at the long-established Stuttgart tournament. The Porsche Junior Team’s Noma Noha Akugue sprang the day’s biggest surprise when comfortably beating the No. 1 seed Margarita Gasparyan 6-3, 6-4. Only 17-years old, the current German champion is ranked an incredible 698 places below the Russian. In the final round on Sunday, Noma Noha Akugue will face fellow German Nastasja Schunk from the Porsche Talent Team, who defeated Daniela Seguel (Chile) 6-4, 6-4.

A second Porsche Junior Team member has also progressed to the next round. Julia Middendorf won 4-6, 6-1, 6-3 against the Croatian Jana Fett. Her opponent in the contest for the main draw ticket will be her countrywoman, Tamara Korpatsch. After the Porsche Talent Team’s Katharina Gerlach downed the Romanian 6-3, 7-5 Laura-Ioana Paar, two Porsche Team Germany players also booked their places in the final round of the strong qualifying tournament: Anna-Lena Friedsam took her chance in a match lasting two hours 20 minutes by eventually overcoming her club teammate Stephanie Wagner 6-4, 4-6, 6-3.

Mona Barthel from the local TEC Waldau Stuttgart club, who last stood in the singles main draw at the Porsche Tennis Grand Prix back in 2015, won 6-1, 6-4 against the Italian Martina Caregaro. The final round of qualifying begins at 11.00 am on Sunday.

The tournament draw at the Porsche Tennis Grand Prix will take place on Centre Court in the Porsche Arena at 2.00 pm on Tuesday. In attendance at the ceremony will be Ashleigh Barty, the Australian world No. 1, as well as the two-time Stuttgart winner Angelique Kerber. The draw will be televised live on Porsche Tennis TV at porsche-tennis.com live.

Our new media hub containing all the relevant information about the Porsche Tennis Grand Prix like press releases, match results, statistics, audio recordings of press conferences with players and photos is available to journalists at the start of the tournament via the Porsche Press Data Base at presse.porsche.de/mediahub. Further contents can be found in the Porsche Tennis Media Guide.