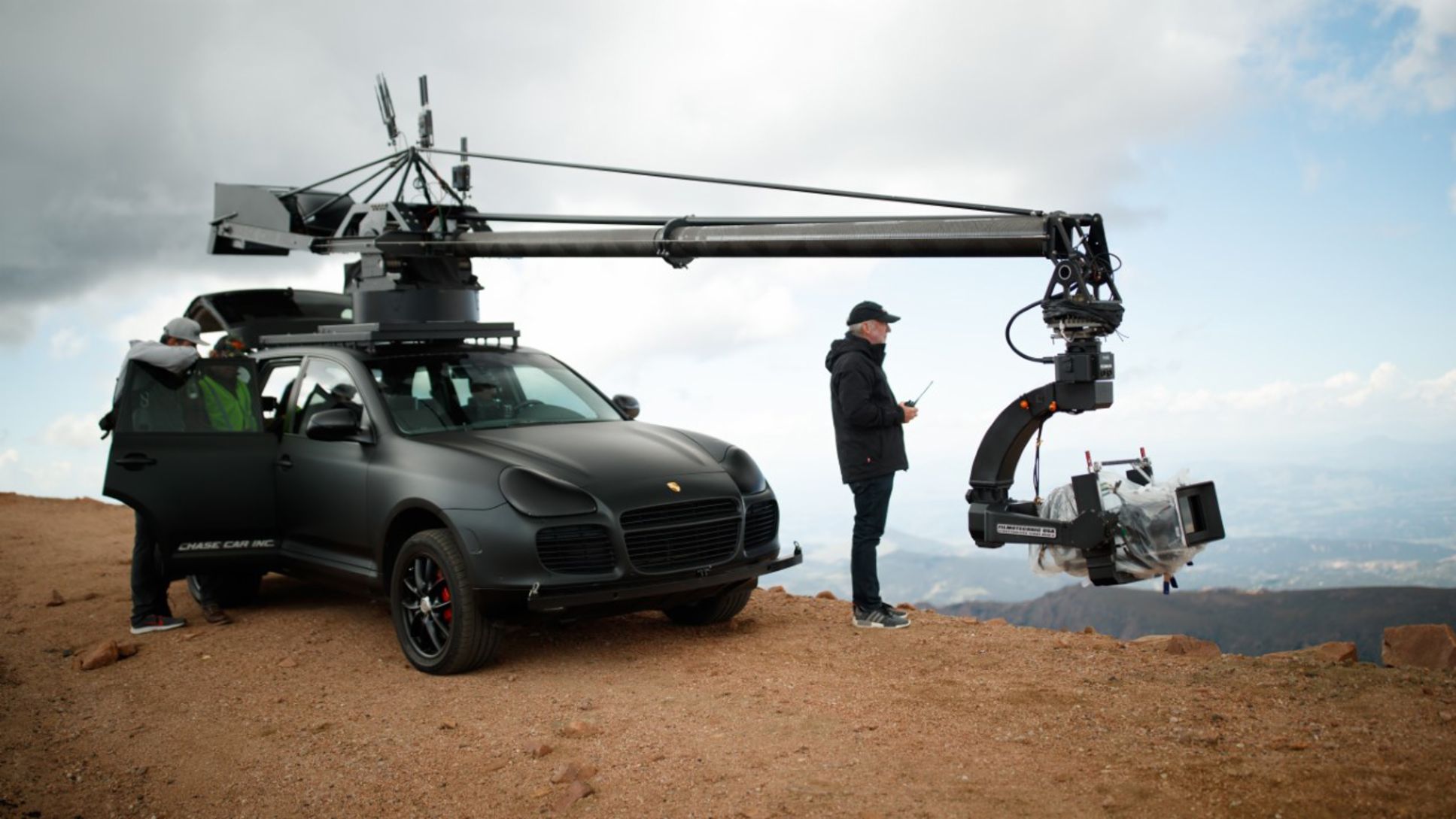 Jeff Zwart knows Porsche like few other filmmakers. After 30 years shooting commercials and short films for the brand, combined with a lifelong love of the cars and a successful career racing them, you’d be hard pressed to find another living person more intimately in tune with how to capture Porsche in motion.

“I’ve been a filmmaker for the last 30 years, but the discipline that photography taught me is extremely important.” Jeff Zwart

Zwart began working in stills, however, shooting for Road and Track magazine straight out of college in the mid-1970s. He managed to juggle rallying at a national level with the increasing demands of international travel for editorial and advertising shoots. After a decade on the frontline of automotive photography, he shot his first commercial.

“I’ve been a filmmaker for the last 30 years,” he says, “but the discipline that photography taught me is extremely important. If you craft each shot in the same way you do a print, that’s a great philosophy to start out with.”

Zwart’s working repertoire has never been limited solely to Porsche, but it is undeniably where private and professional passions merge. “Every Porsche tells a story,” he explains, “and Porsche’s own history is so rich that inevitably the story telling comes across. The cars are naturally beautiful, but under that skin is the capability to do something at the highest level. I’ve shot commercials for virtually every car company in the world, but Porsche is one of those brands that already gives you an advantage; visually, from a performance standpoint, the history of course – it’s a magical brand to shoot for.”

Today, Zwart continues to work at the highest level of filmmaking alongside instructing and competing at the Pikes Peak hill climb – a race he has won eight times in various highly tuned 911s.

He is also an integral part of ‘Luftgekühlt’ gatherings and a regular fixture at Porsche’s own events around the world. In what is a rare moment at home in Colorado, he opens up about the art of automotive filmmaking, and provides some essential pointers for anyone keen to follow in his footsteps.

“Filmmakers are living in a golden era of cameras – the price, the size, the versatility. Old film cameras weighed 45lbs and the body alone would cost $100,000. We needed vast mobile rigs and helicopters. Today you can get started just using your phone. The age old saying that the best camera is the one you have with you applies more than ever.

“The main thing is to be comfortable with whatever you’re working with. In my world a camera should be the least intimidating part of your job because the process of creativity requires an open mind. It’s no good if you’re working with equipment that ties you down. A camera should feel like an extension of yourself so that the work is as fluid and spontaneous as possible. The sun’s setting, the storm’s approaching, the car is drifting towards you – if you can’t set up your equipment fast enough to cover it, maybe it’s the wrong equipment.

“You as a filmmaker can do so much with a simple camera. You don’t need all the equipment when you’re starting out. The core is the story, and your own eyes. We’re in an era when the simplest and smallest camera can put us into the middle of this exciting world, and the single most important thing you need is a point of view. If you have that, and it separates you from everyone else, then you’re in the zone.”

“In the commercial world it’s my job to visually interpret a client’s concept, but even if you’re shooting for yourself, create a timeline. I always do a basic storyboard – say 30 thumbnails for a 30 second film, with statics, action and dialogue. This allows you to understand the big picture and means that on shoot day, you can simply cross off each of those frames as they’re done. I never feel comfortable shooting something until I have drawn it out on a piece of paper.

“Light is the single most important part of your craft, but it is also one of the things you can’t control, bar knowing that it’s moving in the same arc every day. So work out where the light is, and how it will flatter the car. We used to have to shoot whole light studies prior to going on location, but now there is technology out there that can do it all for you instantly. An app on your phone will tell you where the sun is going to set, how the light will hit the street, even what might be in the way. Give yourself the best advantage by embracing the tech.

“Don’t get hung up on the weather forecast. People think you always want a perfect sunny day, but in my experience bad weather has brought me more opportunities than it’s taken away. It motivates you to work faster and gives you super-dramatic skies that you could never hope to render with special effects.

“Understand your subject. Designers put so much thought into a car’s proportions, and as a filmmaker you have to find the sweet spot that’s almost viewed through the designer’s eye. Try to put yourself in the position of the person who actually designed the car. Think about its unique qualities, even its historical influences. I consciously balance a lot of things out that way.”

“I always want an immersive, participatory feeling to what I shoot, so you have a sense of what it was like to be there. But there are a million approaches you can have. As a filmmaker coming into this business, take a look at as much as you can. Determine what your influences are, work out what you like and then figure out how you do that. Having that personal point of view is super-important.

“Ask yourself what makes this particular car look good. Is it shooting from eye level, 5.5-feet up, or is it two inches off the ground? Height is so important, depending on what story you want to tell. So put the car in the middle of an open space and walk around it. Go low, go high, try a long lens, a wide lens, and then you’ll see what’s working. And think of cars as mirrors. They are mirrored surfaces that don’t look great in every light, so pick sun position and shade carefully.

“If you want to make your subject feel fast, move towards it. If the car is racing towards you, race towards the car. Suddenly a car doing 40mph feels like it’s doing 90. If you want to really see the car, match its speed, but if you want action, converge on it. Either that, or chase it, but then you want to feel like the camera can barely keep up. Above all, be spontaneous. If there’s a magical sky, be prepared to whip the camera through 180 degrees or jump to the other side of the road. Adaptability is critical.

“Recording sound is a bit of trial and error. It’s not just an exhaust note you’re after, but a combination of engine, tyres, and wind too. Experiment with microphone position for where the sound is best towards the rear of the car. And try to keep it out of the wind and exhaust. That isn’t easy, admittedly, especially when you’re ripping through the gears in a Porsche.”

“Leave your ego behind in the editing process. It sounds obvious, but if you’re making a film for other people to see, you have to take them into account. So often, the rough cuts I see are much too long. Establish who your audience is and what will make them engage. Make it shorter if you can. Just because you shot it all, it doesn’t mean it all has to be in there!

“Post-production is an important part of what we do and it can be time consuming and tough. So always give your client or editor options. Even if that’s just you! You can learn so much from the editing process, about what does and doesn’t work, how two shots can often tell a story better than one. It’s tricky at first, but eventually you’ll see ahead of time what you can do to make life easier in post.

“You don’t have to be a director to have a fantastic career in film. I tell young filmmakers there are so many aspects to the industry, from developing the cameras, to editing, to special effects, grips, gaffers, wardrobe and props departments. There are great possibilities out there that aren’t solely about directing.

“Filmmaking is an extension of yourself. It’s constantly evolving, and is a constant challenge against the elements, against the limitations of time, budget and, of course, the light. Learn to love that challenge. When you go out again, do all the prep, but have your eyes open for new opportunities. Plan everything, but be prepared to react.”

Feeling inspired? Get involved by sharing clips you’ve filmed, either before social distancing restrictions were imposed or while adhering to the rules that apply in your area. Use the #GetCreativeWithPorsche hashtag and we’ll share our favourites.