The faces of the wide spokes and the rim flange are polished and thereby stand out against the black-painted rim and black sides of the spokes. The wheels are designed in the shape of a wing, or cloverleaf, and are reminiscent of the legendary Fuchs wheels that were first used on the 1967 Model Year Porsche 911 S.

In period, Porsche simply referred to these rims as alloy wheels, which were part of the sports car’s standard equipment. The designation of the aluminium wheel is modest, but it reflects a logical idea, which was that the new Porsche 911 S was to have lighter wheels than the series-production 911 in order to reduce unsprung mass. The specification for this more powerful version of the 911 demanded that its wheels weigh around three kilograms less than their steel equivalents.

There are many reasons why the Fuchs rim became a legend. The most important is the design. The critical impetus was provided by Ferdinand Alexander Porsche. In 1966 the aluminum wheel made its world debut. As did the 911 S.

This was initially an insoluble challenge for traditionally produced cast aluminium wheels, which were just as unable to withstand loads as wheels made of several parts. The contradiction could only be resolved thanks to an innovation by Otto Fuchs KG, an alloy foundry in Meinerzhagen in the Sauerland region of Germany, who were able to supply a wheel that was light and yet able to meet every requirement. The company implemented a new production process for this purpose, in which the blank was forged from one piece while the complete rim area from outer to inner horn was rolled.

The ALMgSi1 aluminium alloy used is 97 per cent aluminium, supplemented by magnesium, silicon, manganese, titanium and other ingredients – a formula that is still valid today.

The original design of the wheel, with connecting webs that taper to a point, was created in May 1965. However, Ferdinand Alexander Porsche modified the wheel in favour of a more harmonious appearance. The minutes of the meeting note the following: “Contrary to our proposal, Mr. Porsche Jr. had changed the shape of the five connecting webs between hub and rim for style and visual reasons. While our design was well adapted to the contours of the discontinued series-production vehicles, the shape developed by Mr. Porsche Jr. appears more harmonious on the new vehicle".

Since meeting the high standards of quality and safety of Porsche is the top priority, the wheels are subjected to extensive testing at the Porsche Development Centre in Weissach.

An example of these stringent test requirements for Porsche original spare parts is that the wheel trims featuring embossed and coloured Porsche Crests from the "Porsche special request programme" of the 1980s passed the cross-cut test with flying colours.

In this test, a cut is made in the wheel trim down to the base material, so that a grid-like pattern is created onto which a standardised adhesive tape is stuck, pressed on and then removed in a predefined period of time and at a specific angle. This test is designed to demonstrate the high quality of the Porsche Classic hub cap, as there is no peeling or flaking of the surface, and means that the wheel centre is ready to face the next 30 years. 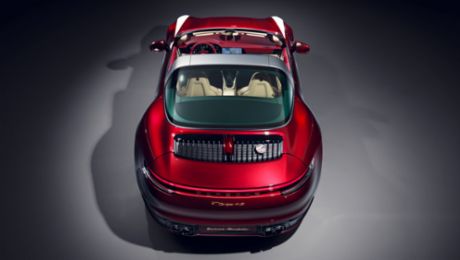 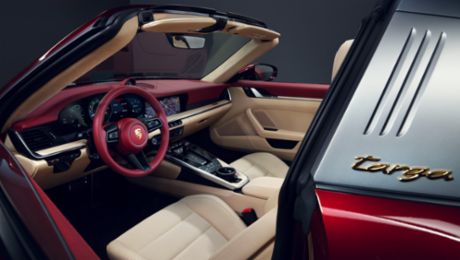