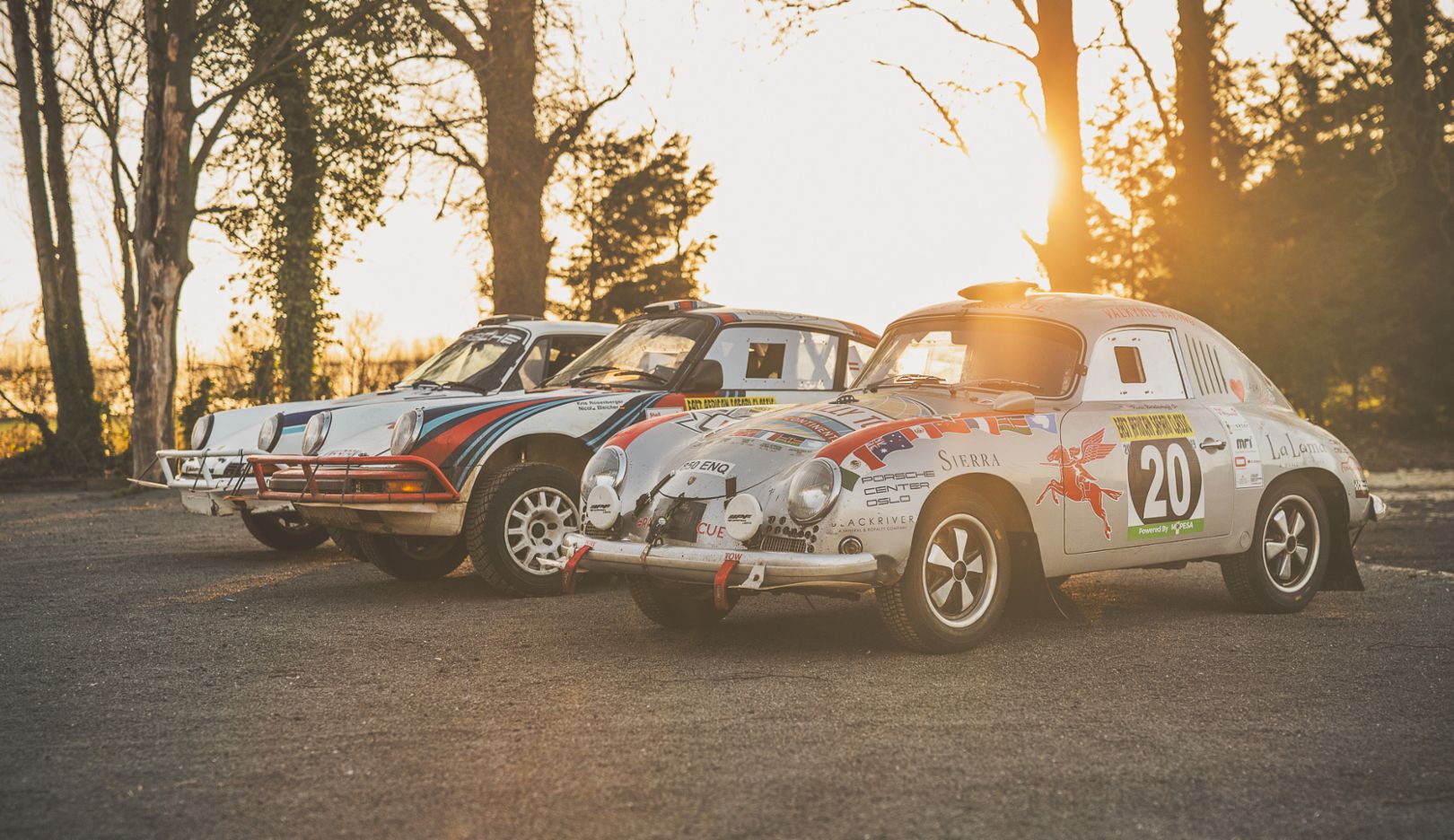 On a chilly winter morning, the sleepy Oxfordshire village of Wardington is shaken awake by the rumble and thump of a vast container truck, edging its way past thick hedgerows and thatched cottages, turning awkwardly off the narrow high street and up a steep access track. A few minutes later another arrives. Then another, and another. The penultimate truck to make this sharp left turn carries a battered silver container with the unmistakable outline of a 911 painted on the side, beneath which read the words ‘Tuthill Porsche’.

For enthusiasts of classic Porsche motorsport, particularly anything with a rallying bent, the name Tuthill is part of the folklore. Having worked privately on both 356 and 911 in the late 1970s, its small but expert team went on to win a contract courtesy of Prodrive to prepare the bodyshells for Porsche’s works 911 SC RS rally cars. In the intervening years the company has grown in size, knowledge and reputation, becoming the undisputed experts in air-cooled 911s that take the road less travelled.

And that is why we’re here today. In these six containers, gradually being off-loaded into the still-frosty yard, sits the aftermath of the latest East African Safari Classic Rally, an event without parallel in modern motorsport, and one that Tuthill Porsche has just won for a remarkable fourth time.

These 12-metre containers have been in transit since before Christmas, and as the doors crack open, the extent of this achievement starts to reveal itself. They are piled high with spares, tyres, wheels and the detritus that comes in the wake of nine days of rallying across the unforgiving Africa bush. And then there are the cars, caked in red Kenyan dust, mud, flies and gaffer tape. Battered and broken, partially disassembled, their vivid liveries glinting out from the gloom.

The East African Safari Classic formed part of the World Rally Championship for 30 years but today is a standalone event, populated entirely by privateers, that pits cars built before 1986 against thousands of kilometres of Kenyan and Tanzanian wilderness. The vast distances covered, in extremes of heat and humidity, coupled with the sheer remoteness, make it a unique challenge for both drivers and crews, a physical and logistical nightmare. But one that Richard Tuthill and Co can’t stay away from.

We meet Richard by the first container, inspecting a precious cargo that hasn’t seen daylight in almost two months. Tuthill campaigned an incredible 10 cars in the 2019 Classic, eight of which are back here today, strapped down beside tea crates overflowing with the paraphernalia of their sub-Saharan marathon.

The cars Tuthill campaigns in Kenya are G-Series 911s, so getting on for half a century old. They run the 915 gearbox and period air-cooled flat-six, displacing a naturally aspirated 3.0-litres. These are genuine classics, cars the rest of us struggle to maintain as weekend runabouts. What is more, 10 cars means 30 technicians, three per car, alongside a support staff of team management, doctors, engineers and physios. Somewhere between 40 and 50 people in total, all on the road for 10 days straight, including a single rest day in the middle. The organisation of this many people is impressive enough, but the logistics of campaigning 10 classic performance cars in an off-road rally on another continent is truly mind-boggling.

“I look at it as 10 individual teams, centrally coordinated and managed,” Richard says. “We have one container per car that holds everything apart from wheels and tyres, so jacks, axle stand, jerry cans, gearboxes, whatever it is. Probably 100,000 Euros of spares per car.” There is also the so-called mothership, the branded container we saw earlier. It holds even more, so every night the mechanics go there and top up. “Say, three sets of brake pads and a front right strut. And that damaged strut gets rebuilt by a damper man overnight, so we’re constantly rebuilding everything in case we need it.”

“We have one container per car that holds everything apart from wheels and tyres, so jacks, axle stand, jerry cans, gearboxes, whatever it is. Probably 100,000 Euros of spares per car.” Richard Tuthill

Sometimes even this system can’t keep up with demand, however. “This year we had a big run on main control arms. By Day 4 we’d used 60 per cent of our allocation of front right TCAs because they were all hitting the same thing. So you ring home and ready people to fly out with X,Y or Z. One year we ran out of gearboxes and were rebuilding the ones we’d flown out on the rest day. So you do have to be on it.”

This is characteristic understatement from Richard, who, as CEO of Tuthill Porsche, effuses a calming energy about the place that proves invaluable on the Classic. But enough for rebuilding 915 gearboxes in the bush?

“It’s what we do,” he says simply. “In 2017 Stig Blomqvist had an engine problem. Now, no-one likes an engine problem, but that year we changed an engine and gearbox in 13 minutes, which also involved me driving six hours straight through the night to pick a new engine up.” Richard Tuthill got back at three or four in the morning and the old engine and gearbox were on the ground. “Stig pushed the car out of parc fermé, into a field, and 15 or 20 of us jumped on it. The second-place car then left parc fermé with Stig, who was leading the rally, still in this field with no engine and no gearbox. And the road section up to the first stage was something like 12 km. So cars two, three and four all drove past thinking ‘that’s the end of him’, and as they lined up for the beginning of the stage, Stig drove past them to take up his place as first car on the road. That’s what we love.”

After over 30 years at the coal face, there isn’t much about old 911s that fazes Richard and his team. And as he explains, it’s the perfect car for the job: “The engine’s in the right place, so you’ve got traction. With 3.0 litres you’ve also got torque. You’ve got independent suspension on all corners and a strong monocoque bodyshell. And it was brilliantly built in 1973. We’ve got five engines being built here today, all with original cranks, original cases, original heads. Even with the development projects we’re doing, if you ignore what Porsche did in any of their cars you make a huge mistake, because they were just right with everything.”

Looking at the state of some of the cars that have now rolled out into the chilly British morning, cars that all finished the rally, it’s clear that both original design and current expertise are playing their part. “There’s a misconception that the cars come back wrecked from Africa,” Richard continues. “They come back wrecked if you hit stuff. And no names mentioned, but some of our drivers hit everything there is to hit in Africa. But if you drive properly you can win the rally and your car’s like new.”

And it’s true that most of these cars won’t even have an engine rebuild before heading off on their next adventure. Further testament to Tuthill’s preparation and Porsche’s original design. Nevertheless, the work that goes into getting them over the line, and over the line first, is astonishing, especially when you consider that all the servicing in Kenya is going on in the evenings, in the pitch dark.

“We’re geared up for it,” Richard says. “We’ve got lights and everyone has head torches, but sometimes I just don’t know how the teams do it. The human aspect is the single biggest thing. They spend three to six weeks out there, and at the end of the rally I couldn’t be more impressed. Or grateful. They are extraordinary people and we have a brilliant team atmosphere.”

He pauses for a moment as we survey the cars, bloodied but unbowed, and the engineers begin pushing them back towards the workshops. “But it’s a good thing the rally is every two years, because if I asked them today if they wanted to go back to Kenya, it’d be a tough one to answer. You need at least six months to a year before you think it’s a good idea to go back.”

A total of 19 overall victories, countless class successes and incredible emotions have linked Porsche with the 24 Hours of Le Mans, the world's largest and most traditional motorsport event, for more than six decades. On 14 June 1970, Porsche achieved its first overall victory there with the 580 hp 917 KH sports car.

An unprecedented success story started seven decades ago on 26 May 1950 when the first new Porsche car was collected from the factory in Zuffenhausen by its new owner.