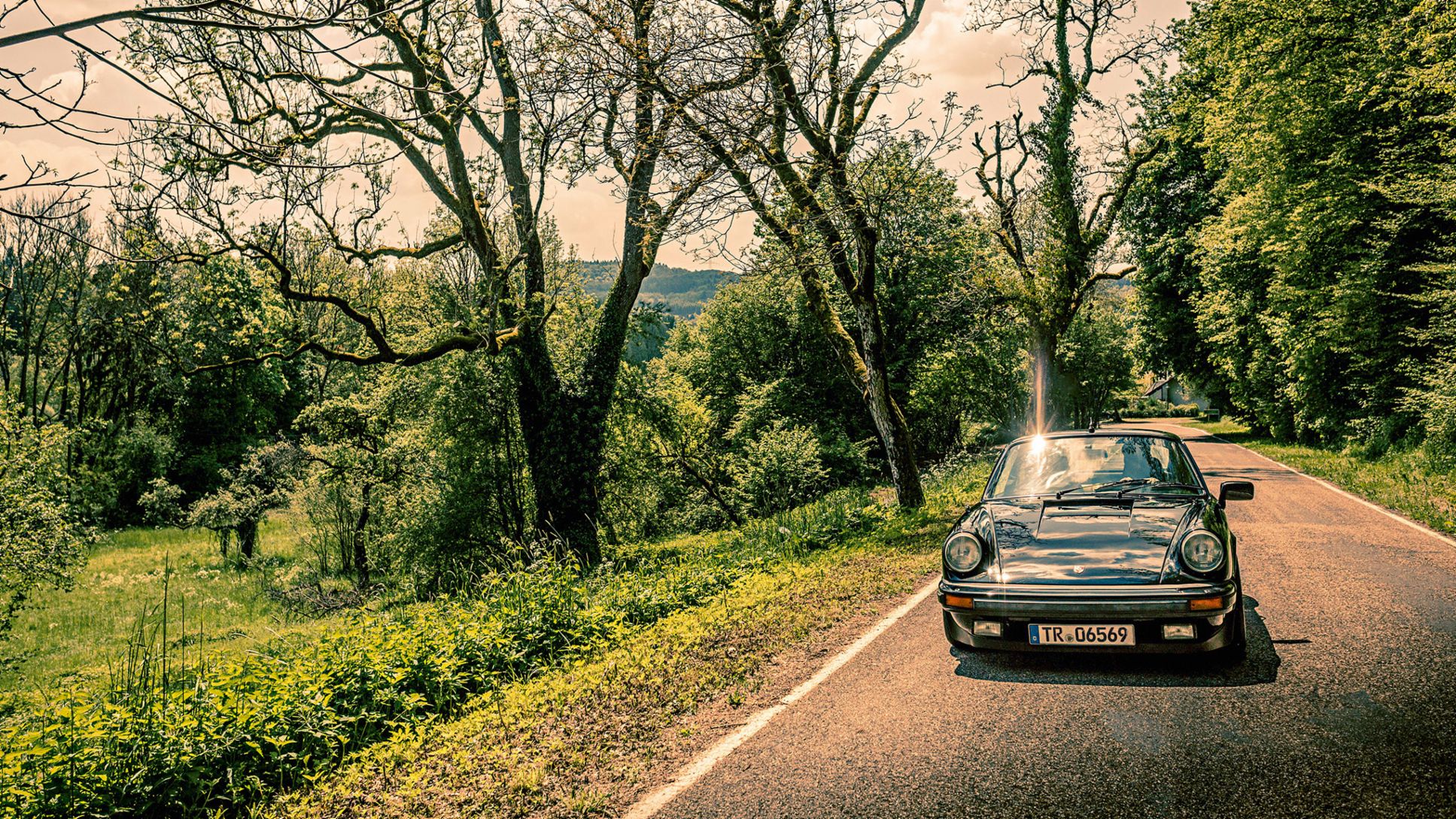 The first of its kind

This 911 should never have existed. Engine, year of manufacture, rear wing – nothing matched. But it was ahead of its time, just like its first owner: Prof. Dr.-Ing. Ernst Fuhrmann.

Sometimes you just need a little luck and good intuition. The black 911 – which came Porsche connoisseur and dealer Walter Hoffmann’s way in 2008 – did not look like anything special to start with, aside from the bold colour combination with the lemon yellow leather interior. Nor was it a find of the 'see, buy, take home' kind. In fact, the negotiations with the previous owner did not go smoothly, because something didn’t seem quite right with this coupé, first registered in 1974. A 3.0-litre engine, which atypically still delivered 190 PS, the Turbo wing – these were all ingredients that would only later be sported by the 911 series. There was a suspicion that the car had been one of those patch-up jobs. Although well preserved, it was no longer true to the original. But no matter: Hoffmann still had another 2.7-litre engine in his garage at home in Hermeskeil, which would be a good match for car. Finally, the deal was made.

Indeed, the black 911 was one of a kind. It already had the six-cylinder boxer engine that Porsche presented in 1975 with the 911 Carrera 3.0 – which even then had 200 PS. This made it almost as powerful as the legendary Carrera RS 2.7, although it already had the fuel-saving Bosch K-Jetronic instead of an intake-manifold fuel injection system: the world still had to recover from the oil crisis. At the same time, the engine provided the basis for the forerunner of the 911 Turbo, which also came onto the market in 1975 and caused a stir with the rear wing that already graced the test car. Walter Hoffmann’s new acquisition therefore secured its place in the 55-year history of the iconic sports car series.

But it got even better.

As was customary at the time, test vehicles often had a second career as company cars, and this was also the case here. From July 1974 to January 1976, the black 911 was at the disposal of Prof. Dr.-Ing. Ernst Fuhrmann – the first Chairman of the Executive Board of Porsche AG, the new entity the sports car manufacturer had been transformed into in August 1972, and at the same time the father of the famous Fuhrmann four-camshaft engine. This therefore marks the beginning of a whole new story.

“Vehicle for own use” – this information in the Porsche model’s 'birth certificate' really aroused Walter Hoffmann’s curiosity. Interesting details would now come to the fore.

Fuhrmann was one of Porsche's first employees. Born in Vienna, he joined the design office as early as 1947, when it was still located in Gmünd in Carinthia. Together with Ferry Porsche, the young engineer worked on numerous projects, including the Cisitalia 360 race car – a 718-kilogram Grand Prix Monoposto, ordered from Porsche by the colourful Italian entrepreneur and private driver Piero Dusio, featuring a 1.5-litre, 12-cylinder, mid-engine layout and two superchargers as well as a shiftable all-wheel drive (!).

Back in Stuttgart with Porsche, Fuhrmann remained faithful to the boxer engines. In 1950 – the year in which he also married his wife Elfriede – he earned his doctorate in mechanical engineering. The topic of his doctoral thesis: “Valve trains for high-speed combustion engines”. The course was set –  in 1951 Ferry Porsche commissioned him to develop a high-performance version of the four-cylinder engine that the new 356 series had inherited from the VW Beetle. The result was the famous vertical shaft engine with two overhead camshafts per cylinder bank, which was distinguished by numerous technical features, from double ignition to dry sump lubrication. The latter is still regarded as a hallmark of the brand's sports cars today.

The 1.5-litre boxer engine, henceforth known as the “Fuhrmann engine”, shaped the image of Porsche in the 1950s. The complex aluminium four-cylinder engine made it possible to achieve up to 8,000 rpm, which sounded astronomical at that time. It powered the 356 Carrera models as well as the 550 Spyder and numerous race cars, which flew from one victory to the next, at first with the 110 PS engine and later even up to 190 PS in the 804 Formula One car. “Fuhrmann engines”, of which almost 1,700 were built, enjoy a reputation for the finest precision mechanics right up to the present day. Only a few experts in the world can precisely adjust the complicated valve train with its camshafts connected intricately by angular gears.

Fuhrmann's ambition as an engineer and head of engine testing was not yet satisfied. If the company did not want to pay for certain components for his work, he sometimes also got them at his own expense. But when the position of Technical Director was filled in 1956, the role was given to someone else. Disappointed, he left the company and joined the engine parts manufacturer Goetze, whose boss – himself a passionate driver of a 356 Carrera – soon entrusted him with technical development. In 1962, Fuhrmann became a member of the Board.

Work carried on in Zuffenhausen, too. After Ferry Porsche, Professor Porsche’s grandchildren prepared to take on responsibilities at the sports car brand – above all the young Ferdinand Piëch, who among other things had initiated the equally successful and expensive 917 Le Mans project. The rest is history – at the end of which all members of the Porsche and Piëch families left the operational management of the company behind them and turned Porsche into a stock corporation. Ferry Porsche took over as Chairman of the Supervisory Board.

This paved the way for Ernst Fuhrmann to become the first external manager to head Porsche, initially as Spokesman of the Executive Board, and from November 1976 as Chairman of the Executive Board. He took over the sports car manufacturer in difficult times, which were not only due to the oil crisis. He drove forward the development of the 924 and 928 transaxle models, which earned him the charge of wanting to bury the 911 series. It was Fuhrmann who, despite much criticism, pushed through the 911 Carrera RS 2.7 and advanced the development of the 911 Turbo – the brand’s first super sports car...  with a 3.0-litre boxer engine and elegant rear wing. Just like Porsche had already done with Walter Hoffmann’s black 911. Sometimes you just need good intuition.

Peter Pohl is devoted to the task of overhauling and optimising the engine par excellence of the four-cylinder era.