Up for something new

Somewhere between a coupé and a convertible, the 911 Targa conquered new territory and definitively created a legend.

Admittedly, if the claret-red 911 S which served as Ferdinand Piëch’s company car in 1968 and then belonged to Hans Mezger was one step ahead of its time, the same is perhaps even more true of the emerald-green protagonist of this story. As the first 911 S Targa ever built, it not only established a completely new type of bodywork, but also coined the name of a whole vehicle genre. And it also had a famous first owner: the pre-production prototype was registered to Ferry Porsche, the main boss himself, on 2 August 1966. This makes the one-off model even more special, unique and valuable.

The Targa was a very practical reaction from Porsche to a dispute that was raging in the early 1960s on the American market, which was vitally important for the young sports car manufacturer. Between Detroit and Dallas, open-top cars were suddenly considered dangerous as they were said to provide insufficient protection for occupants in an accident. Dark clouds were brewing over the future of the convertible. Of course this development was met with little enthusiasm in Stuttgart-Zuffenhausen as most of the 356s shipped overseas had a fabric roof. And it goes without saying that the Swabians did not want to lose their customers in the sunshine states of the USA. The sales department also vehemently insisted on an open-top variant. So something new was required, a smart solution in keeping with the company’s style which would overcome apparent contradictions, be visually attractive, but functional in form.

Once again, motorsport provided the inspiration. It had long been standard practice to fit a rollover bar to open-top sports cars for racing customers – the battle for seconds and positions can sometimes end in a double somersault, and nobody wants to think about having to tuck their head in when it happens. However, the developed designs did not look particularly chic. 911 designer Ferdinand Alexander (“Butzi”) Porsche, who could find few positives in a convertible version of his acclaimed hatchback design, also deemed a bulky tubular construction to be out of the question. But it would be possible to give the rollover bar a nice shape and make it from stainless steel to give a sporty yet elegant look with plenty of charisma. The basic idea for the “safe convertible” was born, but the name “Targa” was not mentioned at the time.

The initial trials in summer 1964 began promisingly. The now 20-centimetre wide rollover bar, the roof section which could be removed in a few easy steps, and the rear mini soft-top retained the coupé silhouette while simultaneously boosting the torsional rigidity of the body. The variant featuring a handle brought further advantages as the surgical interventions on the bodywork were kept within minimally invasive limits. For example, the bonnet, rear end and rear wing panels remained unchanged, which also pleased the thrifty Swabian accounts department – due to the costly development of the successor to the 356, money was still tight so soon after the market launch of the 911.

When the curtain was raised on the great new hope at the IAA motor show in Frankfurt in September 1965, it had already undergone a baptism. Just as the iconic term “Carrera” referenced Porsche’s early success at the famous Carrera Panamericana in Mexico, the name of the new 911 bearing a rollover bar was also intended to evoke motorsport connotations. “Le Mans” or “Monza” were obvious choices, but both were already taken. The Swabians had just won a crazy endurance race on Sicily for the fourth time in five years, the Targa Florio. The name “911 Flori” was briefly on the table before domestic sales manager Harald Wagner casually ended the search for a name with the question: “Why don’t we just call it “Targa”?” The Italian term also means “licence plate”, but legend has it that this only came to light when the copywriters were working on the sales brochure. Be that as it may: “Targa” has long been as legendary and self-explanatory as “Kleenex”, although only Porsche models are allowed to bear this name.

Back to Stuttgart. It would be some time before the first customers were able to feel the sun on their backs at the wheel of a 911 or 912. Even the green Targa which Ferry Porsche received in August 1966 was a pre-production model and featured some details that were not carried over into production – such as the plastic strips fastened to the B-pillar with three screws, decorative panels on the upper edges of the doors by the triangular windows, and black-rimmed circular dials which were not included in the A-series until 1968. Even the roof construction is not entirely the same as the later solution. The vehicle also featured special velour carpets, slightly more comfortable seats with basket-weave covers, and a limited-slip differential for the rear axle.

The predecessor to the Targa provided a generous helping of convertible pleasure.  But there were also certain features that its owners – delivery of series models began in early 1967 – were forced to grin and bear, such as the enormous roar of wind noise, which put the beefy sound of the boxer engine in the shade at high speeds. The fiddly folding window also did not find many fans, especially as the plastic had the annoying habit of shrinking in cold temperatures. Porsche even recommended keeping the rear cover closed below 15 degrees Celsius otherwise it may not have been possible to shut it again. Therefore, after only a few months, a panoramic windscreen with heated glass was also made available as an option. It reduced the noise level slightly, improved the all-round visibility, and reduced the risk of theft. It quickly resulted in high demand. In mid-1969 the soft window was finally dropped from the series range, but remained available on request for a short period. Very few people ordered it.

At around the same time, Ferry Porsche and his emerald-green 911 S Targa also went their separate ways. An American aerospace engineer acquired the unique vehicle and remained loyal to it for the next 45 years. It was only at Christmas 2014 that he sold the patinated car to Porsche collector Michael Heinemann, who brought it back to Germany. “I’m fascinated by the fact that, thanks to expert care, the car is still in great shape after 300,000 kilometres”, said the expert, who recently loaned the car to the Porsche Museum. “That is clear evidence of the excellent quality of the brand.” 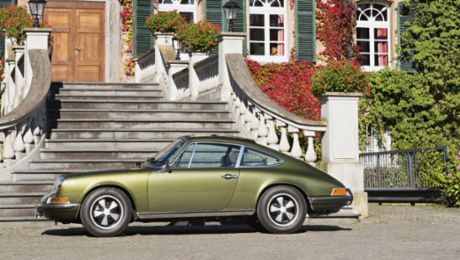 The innovations of the 911

Class benchmark in terms of performance and efficiency for five decades: The 911.