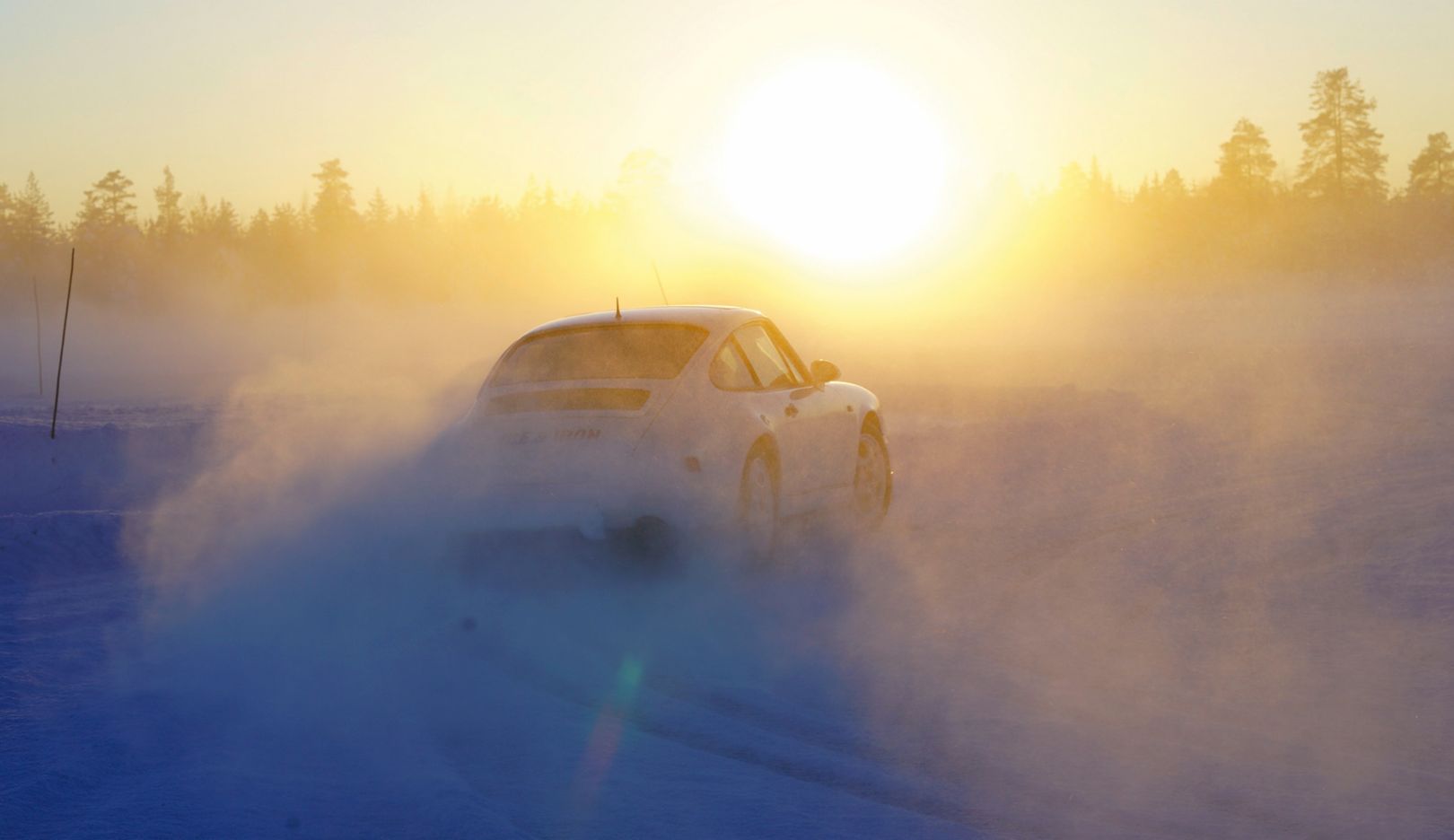 Thinking about next winter in the middle of summer, and about what is perhaps driving in its most beautiful form: tracing circles on a frozen lake in a Porsche 964 C2. What a fantastic dream! Beautiful! A daydream for cooling down.

Drivers rarely associate scoring points with teamwork, except on a frozen lake in Swedish Lapland, where 'moose points' are awarded as a penalty for leaving a given track. One point if your teammates manage to push the car out of the snow, three points if the tow hook has to be used. It’s all just fun; being there is everything. It’s not a competition, right? Simply pin your moose points badge on your jacket and smile. First lesson: skidding off ruins the track. Make way for the most important man on the snow and ice – the Icemaker.

The season starts for him on December 1. Why this day exactly? Johan Sellbom shrugs his shoulders. “Because it's always been like that,” he says. Born in Sweden 31 years ago under the zodiac sign of Aquarius, he owns a third of the lake, which lies 859 kilometres by car north of Stockholm. Johan’s fleet is impressive, including snowmobiles and special-purpose tractors, next to which a Porsche 964 looks like a toy car. “Preparation of the lake always begins with measuring the thickness of the ice, after which the people in charge determine the track layout,” he says. Then you have to blow the snow away and clear the “moose road”. Barely 170 hours later, the link road across the lake is ready. Guided by GPS data, Johan shapes the individual tracks on the left and right of the moose road in snow and ice, so they resemble parts of famous race tracks, such as a section of Belgium's Spa-Francorchamps. Or a track that only consists of bends, which is then called Curves – very apt. Can the Icemaker drift perfectly? That's enough to get him going. “I could work as an instructor here if I had the time,” he says with a smile. He clears the snow from a few more bends before heading home. It is supposed to snow overnight, so the Icemaker will do more rounds then. The next morning everything is perfectly prepared while the most important man sleeps for a short while.

Petrolheads readily recognise the second most important man at the location by his voice: Patrick Simon. Born in Wiesbaden, he is the track spokesman for the VLN Endurance Championship at the Nürburgring, ADAC GT Masters commentator, Formula E commentator, presenter – but also a racing driver and instructor. He started his career in kart racing in 1988, followed by races in series such as the Porsche Carrera Cup, the German Touring Car Challenge, races on the Nürburgring Nordschleife, victories in the German and European Formula Ford Championship, class victories in the European Le Mans Series and the 24-hour race at the Nürburgring. In winter, the father of three is drawn to Swedish Lapland, at least for four weeks. “I never tire of experiencing the spirit of the old cars," he says. "Driving a Porsche on a frozen lake simply feels great."

He is 1.93 metres tall and looks as if nothing could upset him. This calmness gives way to irrepressible joy when he talks about the winter performance training he has created. “Ice & Iron is a dream come true. Where else do you have the opportunity to push old cars so close to their limit?” says Patrick, as he climbs into the 1991 Porsche 964 C2. Next winter, the programme will take place for the third time – he is already using this summer to prepare for the event and is also preparing other vehicles. “In my programme, participants learn controlled drifting on a frozen lake," he says. "The sectional training is geared specifically to learning success, starting with exercises for correct braking, avoidance and load changes. On different handling courses, participants are introduced to both the limits of the vehicle and to their own limits, step-by-step, in small groups,” explains the 44-year-old, driving off while holding the two-way radio in his left hand. The participants follow him to the next track. Patrick shows them once again what the last lap of a winter performance training course lasting several days could look like – the goal, so to speak. If someone like him tells you that everyday life can be easily forgotten behind the wheel of a Porsche 964, you should believe them. Especially if they have just traced a great many circles on a frozen lake.

Everyone is fully motivated. Everyone wants to forget the world around them, to think of nothing but the perfect steering angle, the right amount of throttle, the perfect moment to initiate a drift on the brakes or throttle. And then the feeling that you have finally got it overcomes you. Never again will you mess up a drift. It’s simple. The first left turn goes well. You drift sideways beautifully, and you are sure that, at this very moment, no-one can move this car at its limits better than you. The load change to the easy, long right turn – sensational, you made it – now the long left, very fast, this is the fast track after all, a few touches on the accelerator, further, further, further, don’t lose your nerve. Patrick motivates you from the sidelines, thumbs up; next lap, the radio crackles. He admonishes your gaze as unbridled overconfidence takes over and you’re secretly congratulating yourself. But it's gone wrong already. 180 degrees. Never mind, turn around, keep going, don’t even think about giving up for a second. Le Mans isn’t won in the first lap either.

Nowhere in the world can sunsets be more dramatic than in Swedish Lapland. The last minutes of daylight make the small snow crystals glow and dance before your eyes while the 964 traces its final circles, for now. In winter, temperatures plummet to minus 40 degrees Celsius and, with a lot of luck and a little bit of patience, you can see the northern lights flickering in the sky. Thanks to its geographical proximity to the magnetic North Pole, the probability of seeing this light spectacle is quite high in the region around Pjesker. Before everyone cranes their necks to look up at the sky, Ice & Iron’s infamous night test is about to begin. Darkness, a still unknown track, light barriers. Second lesson: as soon as you drive on a track for a certain period of time, the idea of competition arises all by itself. But of course, it's not a competition. Everyone just wants to be there. And yet the participants clutch their steering wheels so tightly that their knuckles turn white, their pupils wide from all the darkness then narrowing to a pin head from tension shortly before the start. Arms and necks sore from the previous training days, the muscle stiffness is a reminder that the grip limit of a young classic car is no different than that of a new vehicle. It just feels like a little more than a trophy. Moose points or not.

/
In winter, temperatures in Swedish Lapland drop to minus 40 degrees Celsius. When drifting, participants break out in a sweat. And, during the night test, the many headlights come into their own.

Addicted to motorsports: Hollywood star Steve McQueen, who would have turned ninety this year, pursued his passion as a private racer in uncompromising fashion.