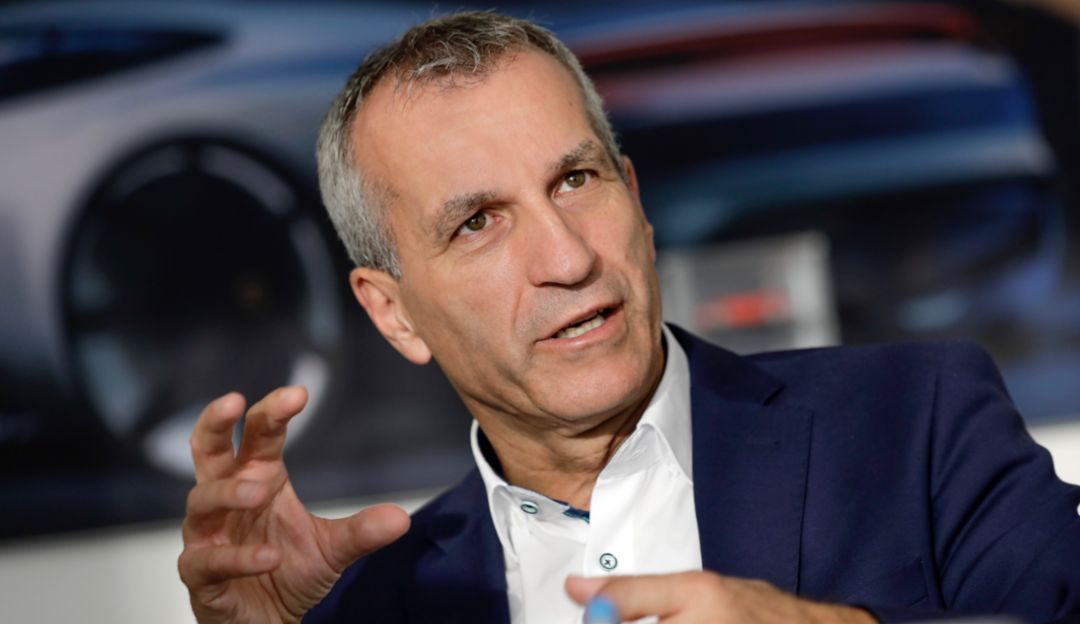 “There is certainly nothing routine about 911 production”

A factory for the Taycan, the first electric model from Porsche, is being constructed in Zuffenhausen – at the same time as production of the new 911 starts. In an interview, Albrecht Reimold, Executive Board member for Production, discusses links between the past and future at Porsche, as well as his passion for the 911.

Mr Reimold, you have plenty to juggle in Zuffenhausen just now – constructing a production facility for the electric Taycan, start of production of the new 911, and also increasing production efficiency overall. How would you describe a typical working day?

Very busy! I have been in the automotive industry for 30 years now, and I can honestly say that establishing a new production facility running at full capacity, with new technology and processes, on a brownfield site – in other words an urban development site – is my biggest challenge yet. And I’ve had to overcome plenty of those over the last three decades. If I had to break my working day down, I would say 20% is taken up by corporate strategy, and at least another 20% goes on production preparation for the fully electric Porsche Taycan – though start of production of the new 911 also requires a lot of attention. Then we have to consider that Leipzig is still a huge site, and keeping staff happy and motivated is also very important for me.

How do you do that; do you entertain them?

I’m not sure if “entertain” is exactly right, but certainly ensuring that our employees have a passion for Porsche is a really important task. Every Porsche should promise its buyer many years of driving pleasure, and that kind of passion and joy only gets infused into our products if employees enjoy what they do and identify with the company and its cars. That is why fostering a leadership culture is very close to my heart, and a responsibility that I take very seriously.

Compared with constructing a production plant for the electric Taycan, is the start-up of an established model such as the 911 rather a routine project?

No, there’s really no such thing with Porsche production. While we do of course seek to minimise complexity in production, assembling vehicles in 60-second production cycles is not something we are aiming for, and is certainly not how we approach the Porsche 911. We see extremely high demand for customisation of our iconic sports cars, and it goes without saying that this is reflected in production. As such, we chiefly work with suppliers who are not focused on mass production, and we expend a lot of time and energy in selection, quality assurance and control, so we always have the perfect material available in the right place at the right time. There’s no aspect that you could describe as an easy routine.

The Taycan, your first exclusively electric model, is currently dominating headlines for Porsche. We are rather worried that the 911 will become something of a stalwart – a model that only exists to maintain the brand image and make the margins needed to complete the changeover to electric...

I can put your mind at rest there. In all of its generations, the Porsche 911 has been an icon, and that will not change. We are working hard to create a new icon with the next generation 911, and we’re having a great time doing it. I’m always fascinated by just how popular our cars are with customers, especially the derivatives such as the GT3 and GT2. When I came to Zuffenhausen two and a half years ago, 200 cars a day were being built – now it is 250.

Will you increase capacity again for the new Porsche 911?

This year we have already made great strides towards increasing productivity so that we can meet market demand. As well as production optimisation, a series of Saturday shifts have also been added. We have a great system in place, which allows us to find out what orders are coming in from dealers, and with which package – this means we can plan our capacities accordingly. But we don’t want to upgrade technical production just so that we are up to 300 units; we would rather leave the line at 250 units, and continue to focus on production preparations for the Taycan.

What does the ramp-up plan for the new Porsche 911 look like?

At the end of Q1 or start of Q2 2019, we will ramp up to peak production again before dipping below the peak, though not significantly so. In recent years we have established a principle that has served us well at Porsche, which is to avoid huge variations during model changes. This very simple principle allows derivatives of the current model – such as the Targa or Turbo – to run alongside ramp-up of the new generation 911. The overlap normally lasts around one and a half years. This process gives production time to breathe and take stock, depending on demand.

Let’s talk about the Taycan production facility which is currently under construction: you are strongly focusing on driverless transport systems (DTS) and somewhat moving away from lines. To what extent will this approach find its way into 911 production?

The “flexi-line” offers huge benefits in terms of flexibility and investment – we’re talking about savings of around 30-40% here. But a brownfield plant like the one used for 911 production just cannot be converted overnight.

So you’re saying that the 911 will stick with the classic mode of production?

Yes. Starting production of a brand-new car – like the Porsche Taycan – in a completely new production facility requires major investment in new technology, as converting existing systems is not actually cost effective per se. The situation may be different in five to ten years. Of course, production efficiency will still increase considerably with the new Porsche 911, but this improvement will take place within the existing production system.

In practice, would that mean that there will be two separate plants on one site, with the Porsche 911 and Taycan being produced separately?

No, there is some overlap of course; starting with the logistics processes, and we are also building a new paint shop that all models could be painted in. We have built lots of flexibility into production so that the 911 can also be produced in the Taycan assembly plant – though not vice versa.

Does that mean that if the Taycan does not get off to as strong a start as anticipated, you could utilise the line for a combustion engine model?

Yes, we have the technical capacity to do that; but we are absolutely certain that it won’t be required. Based on feedback from the market, the calculation of 20,000 Porsche Taycan models in the first year may be a rather conservative estimate. I’ve had the pleasure of driving the car myself, and I can only say it’s absolutely fantastic! Which is the response we’ve been hearing from all sides.

While we’re talking about it, what role does e-mobility play in the Porsche 911?

It’s still a rather minor one because customers expect the 911 to be what it is. But it’s not entirely out of mind. For example, we have designed the model to enable drivetrain electrification – hybridisation in other words, so we would be ready to implement a change like that.

What has changed for the new Porsche 911 from a production viewpoint?

Lightweight construction is a central issue, as is the plant restructuring that comes with it. For the outer shell, we have completely changed over to aluminium, and we are assembling the bodies in the new body shop which we also use to produce bodywork for the Porsche Taycan. This approach is not just about lightweight construction and increasing efficiency, but also improving the outer shell quality.

A key issue for you has been the establishment of your own tool and die shop. How important has that been in developing the outer shell?

Absolutely vital. There’s a real art to perfecting the shapes and curves of a 911: nothing is “off the peg” here. And you can’t attain perfection with generic tooling. Ultimately, we decided to start producing all our own tooling because without an in-house tool and die shop,  it would not have been possible for us to switch over to aluminium bodywork.