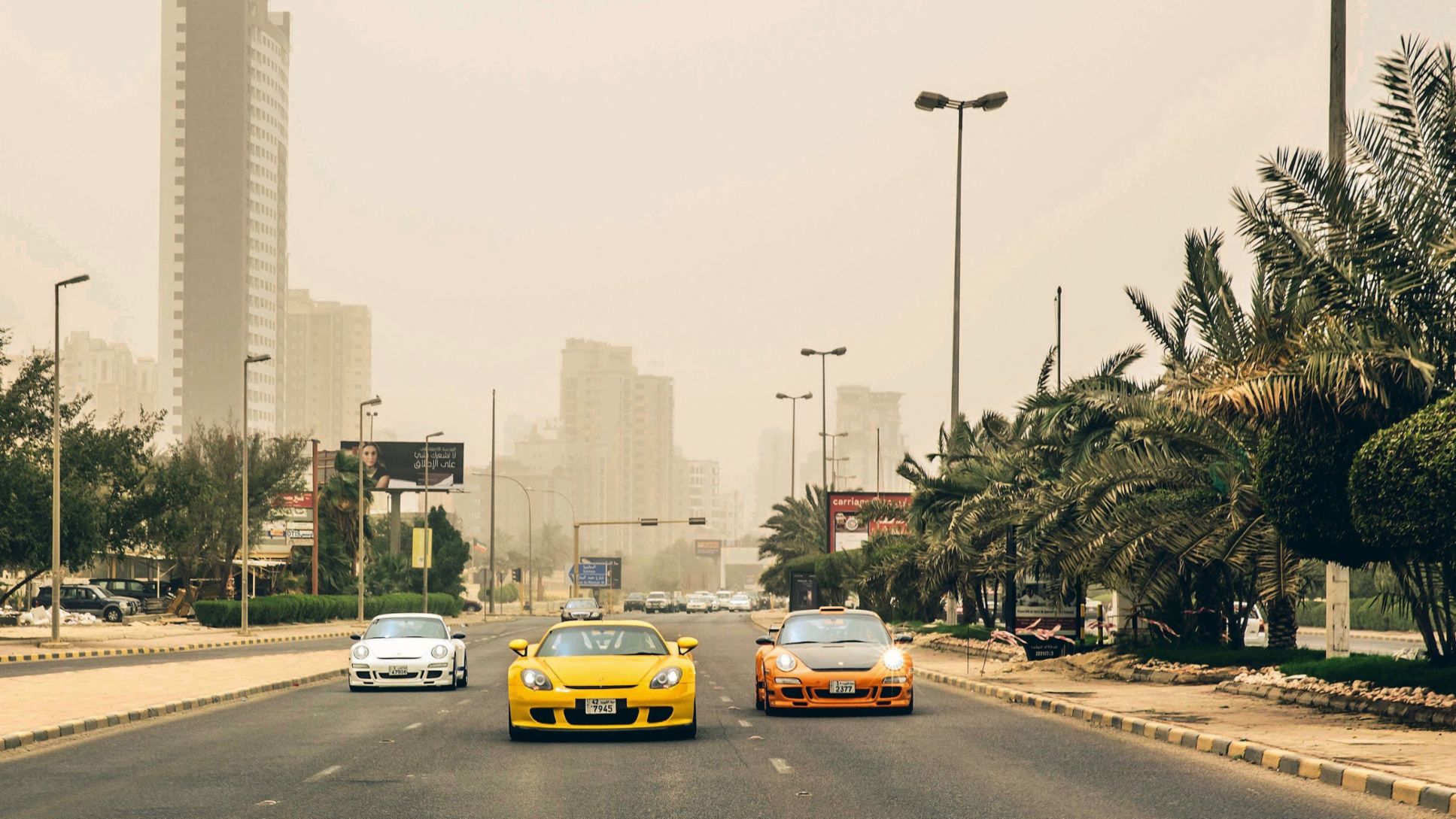 The Porsche enthusiast from the Gulf

Yousef Fittiani is one of the cofounders of the Porsche Club in Kuwait and owns a collection of impressive sports cars from Zuffenhausen. What revs up enthusiasts on the Gulf? One thing is clear: the fascination is the same all over the world.

Eighty steps suffice to grasp Yousef Fittiani’s obsessive attention to detail. It’s precisely eighty steps from the exit of the airport in Kuwait to Fittiani’s 2006 Porsche Cayenne S. The vehicle of his choice to pick us up at the airport. The polished paint frames a beige-colored interior in such pristine condition that it would be impossible to guess its age. And to ensure that this perfection is maintained indefinitely, heavy, transparent plastic mats cover the freshly brushed interior carpet.

In a country in which sandstorms are almost a daily occurrence, it would scarcely be possible to care for a vehicle more meticulously than this. “Constant care is of the essence here; otherwise the cars age faster than they accelerate,” says Fittiani, before adding: “I couldn’t bear to see a car from my collection in a neglected state.”

How his passion for Porsche came about

His collection is an exquisite assemblage of custom Porsche models. Fittiani keeps them in a private, air-conditioned underground garage. On the way there, he explains how his passion for Porsche came about. It all began in the late 1980s, when he started his studies in the USA. The young man was immediately taken by the cult of the automobile he encountered there. But it was far from the only good turn that fate had done him—he already enjoyed the good fortune of an industrious father, who, rather than plying him with copious funds, encouraged him to take his studies and life in the new culture seriously. To cultivate passions. Make good decisions. And achieve the goals he set for himself.

The first of those goals was a Porsche 944 S2 Cabriolet. “One of my friends at college drove a 944 Turbo S, a wild beast that was as imposing off the track as on it. The purist Porsche design of the late 1980s had cast a spell over me. After my time at college, I regularly strolled past the window displays of the car dealers.” On one of those window-shopping excursions, the then nineteen-year-old saw the white cabriolet.

All that separated the student from his dream car: US$42,000. Fittiani asked his father for a loan. Flush with cash, he went to several car auctions on the East Coast. The idea wasn’t to buy his dream car but to school his understanding of the business. He soon knew which cars required little care to be resold at a profit. After a few intense months on the sale-and-resale carousel, Fittiani had enough funds saved up to afford the desired 944.

“There was also one other thing I came to appreciate in the USA,” says Fittiani. “The family-like atmosphere of the Porsche Club of America. No matter what corner of society the members come from, everyone in the club is equal and shares a common passion: driving Porsches.” It was during those years that Fittiani experienced the greatest roads and racetracks in the US behind the wheel of his Porsche. Another highlight of the period was visiting the Porsche Museum in Stuttgart with his father. By the early 1990s he had earned himself an additional Porsche: a 911 Carrera 2 from 1992. Coral Red on the outside. Gray on the inside.

Back to Kuwait, where the headlights of the Cayenne illuminate a red-and-white gate. An older gentleman with a gray beard stands behind it, squinting into the bright light. When he recognizes Fittiani’s voice, he gives a friendly wave and lifts the gate. Ten minutes later, the second of two heavy garage doors opens and we find ourselves in Fittiani’s garage, where he keeps his Porsche collection. Since purchasing the 944 he has remained true to the sports-car brand, collecting T-shirts, cups, caps, model cars, autograph cards, posters, and calendars bedecked with the Porsche logo. It’s also home to the collection’s greatest treasures: a silver 911 Turbo Cabriolet (Type 996), flanked by a white 911 GT3 and a yellow 911 GT3 RS, both from 2007. Across the way is a 911 GT2 (Type 997) in Speed Yellow; behind it, a black 911 Cabriolet from 1989.

The jewel of the collection: a Porsche Carrera GT

The jewel of the collection dazzles in the center of the room: a Porsche Carrera GT. That the car already has twenty thousand kilometers on the odometer would startle even the brand’s most experienced connoisseurs—as it appears so utterly brand new. “I wasn’t actually planning to buy a GT. But then I found out that a renowned rally driver from the United Arab Emirates wanted to sell precisely this model with just five thousand kilometers on it. I just couldn’t resist,” concedes Fittiani as he lovingly buffs the driver-side door with a soft towel. “Fortunately, I decided to go for it at the time, because the GT is a sensational sports car. A milestone.” When he opens the rear hood, we can barely believe our eyes. The engine is as immaculate as if it had just been assembled on the spot. Fittiani flashes a sheepish grin before explaining: “During the initial maintenance work, I went to the Porsche Center Kuwait several times and actually cleaned many of the car’s parts with a toothbrush before they were reinstalled.”

Fittiani isn’t just an enthusiastic Porsche driver and collector—he’s also keen to promote awareness of the brand. In 2003 he and other enthusiasts founded the local Porsche Club. As its vice president until 2013, he organized countless gatherings and excursions—there is, after all, no shortage of Porsche drivers in the Gulf region. And to make sure it stays that way, Fittiani has already started introducing his two children to the sports cars from far-off Germany. They regularly accompany him to the garage, where daughter Ayda helps him polish the collection. Son Omer watches, wearing a romper. A Porsche romper, of course.

The Porsche enthusiast was born in Kuwait in 1971, bought his first Porsche in 1990, finished his studies in the US in 1995, has worked in the medical field since 1997, and now lives in Kuwait and Jordan with his family. As the next addition to his Porsche collection, he would like to add a Porsche 356.

Porsche has presented the GTS version of the Panamera in the Persian Gulf. In addition to numerous journalists from all over the world, Yousef Fittiani also visited the event in Bahrain.

Media representatives had the opportunity to test the particularly sporty version of the Gran Turismo on the Formula 1 and WEC track "Bahrain International Circuit". More impressions can be found in the image gallery (left column). 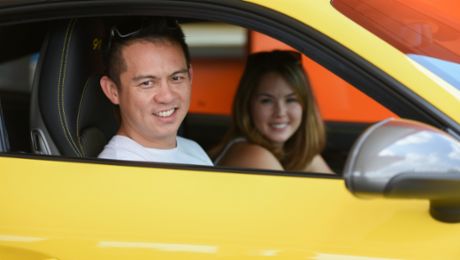 The power couple and the Porsche 911 Carrera T

What’s the perfect car for a weekend getaway for a husband and wife racing team? The Porsche 911 Carrera T. 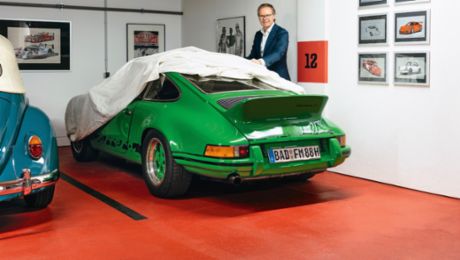 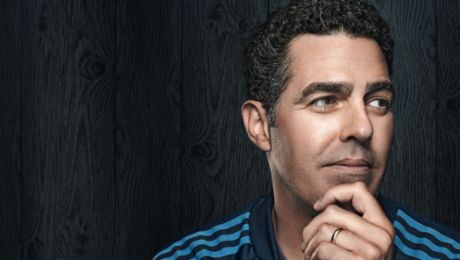 911 Love: An interview with Adam Carolla

His favorite place to be is in his garage, which houses Newman’s Porsche 935—winner of Le Mans in 1979.